Divisions Could Weaken U.S.-Led Coalition in Iraq and Syria

Over the past week, the U.S.-led coalition carrying out airstrikes against Islamic State positions in Iraq and Syria has expanded to include several new members. This has enhanced its overall combat power and spread the burden more equitably. The British parliament voted Sept. 26 to join the group and has already commenced airstrikes over Iraq. Denmark and Belgium also decided to participate in direct combat operations. These new partners join two European peers, France and the Netherlands, as well as Australia. Notably, these six countries have chosen to restrict their combat roles to Iraq. This contrasts with the role of the United States' five Arab partners — Jordan, Saudi Arabia, Bahrain, Qatar and the United Arab Emirates — which have been carrying out airstrikes with the United States in Syria since operations expanded there Sept. 23.

This odd division of labor does not operate in the interest of efficiency but is instead an artifact of the complicated and juxtaposed reality on the ground and in the political arena. The battleground against the Islamic State is ostensibly divided between the sovereign states of Iraq and Syria. In reality, however, it is a single space spread over what has become an imaginary border. The divided coalition reflects the members' divergent political views on how to manage the respective situations of Iraq and Syria. Ultimately, the arrangement artificially separates what should be treated as a single battlefield and a single enemy. This weakens the coalition, confuses desired outcomes and often limits operations to what will appease all members.

The coalition's division of the battle space into two parts has already led to differences in target selection. Since earlier limited U.S. operations in Iraq expanded into Syria, the United States and Arab coalition members have focused on critical infrastructure in Syria that supports Islamic State operations in Syria and Iraq. This has included command centers, finance operations, supply depots and, most recently, oil refineries. The coalition's strategy in Syria has been to degrade the Islamic State's military capabilities through destruction or disruption of the critical assets that support it. 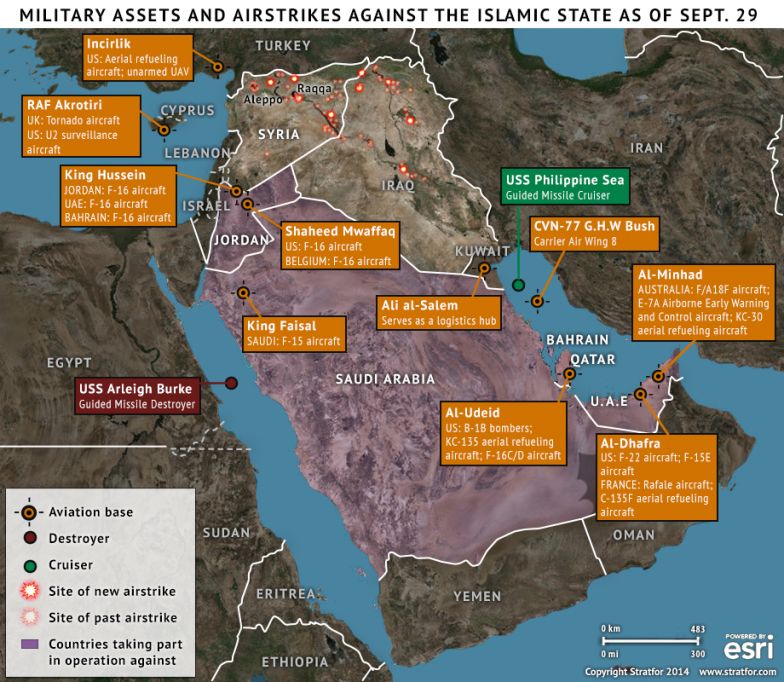 Military Assets and Airstrikes Against the Islamic State as of Sept. 29

The strategy in Iraq, however, has been quite different. There, the focus of air campaigns has been to buttress ground operations. This has translated into close air support for Kurdish peshmerga and national government forces, as well as strikes aimed at destroying Islamic State military supplies, vehicles and heavy weapons used in operations against those forces. This divergence stems in part from the different tactical situations in each country: In Iraq the coalition is operating in direct coordination with local forces, whereas in Syria efforts to facilitate anti-Islamic State ground attacks are in the early stages, with only the first steps having been taken to train Syrian anti-regime rebels in Saudi Arabia.

But these disparate tactical realities are only part of the picture. The primary differences between these operations are explained by the imperatives of the partners operating in Iraq and in Syria. The United States' Sunni Arab partners have an interest in participating in the operations against the Islamic State in Syria. Degrading the Islamic State's capabilities there takes pressure off of anti-regime rebels currently fighting Damascus and Islamic State forces simultaneously. The United States' reliance on support from these Sunni Arab countries, however, presents the risk that the core mission in Syria will be stretched in two different directions. The United States aims to cripple the Islamic State without directly targeting Syrian President Bashar al Assad. The Sunni Arab states, though, want to dislodge al Assad's Iran-friendly regime and weaken the position of Lebanese-based Shiite militant group Hezbollah, which is assisting the Syrian government.

For their part, Australia and the coalition's European members have a different set of interests from their Arab partners. Because a large number of Islamic State foreign fighters originated in Europe, these governments fear that the militants could at some point return home and threaten national security. The Islamic State has also taken European hostages and continues to be a source for radicalization inside Europe. This means that these states have compelling reasons for carrying out strikes against the Islamic State regardless of its area of operation. All six of these powers, however, have chosen not to operate over Syria without a clear mandate from the United Nations. In European countries especially, military intervention is a touchy political subject; approval for any type of direct involvement typically requires the support of parliament, putting tight electoral constraints on such operations. These limits are less severe in the case of Iraq, where the coalition is delivering assistance to a host nation requesting help rather than conducting a military intervention in a country without coordinating with its government.

The division of the coalition into two separate areas does not necessarily limit its military capabilities, but it does pose serious risks to its cohesion and, by extension, its ability to sustain effective operations over Syria in particular. Because of the Arab states' direct interest in the outcome of the Syrian civil war, they may try to push the United States toward extending air operations to targets of the al Assad regime. This is something the United States is unwilling to do, in part because it would carry a much higher logistical cost. But if such a disagreement were to threaten operations over Syria, the Europeans' reluctance to extend their own activities into Syria would seriously limit the coalition. The United States would also risk being perceived as the sole actor on the Syrian side of the battle, rather than part of an international coalition, and this could result in significant blowback on the ground. At the same time, disagreements on the scope of operations in Syria could also constrain the effectiveness of strikes by limiting the target set to the bare minimum to which all parties can agree.

As it stands, the U.S.-led coalition is fragile. When something is this delicate and complicated, it is hard to take the decisive action required to degrade and contain a dynamic opponent such as the Islamic State.