With a dramatic hike in Turkey's overnight lending rate from 7.75 to 12.5 percent announced on Jan. 28, Turkish Central Bank Gov. Erdem Basci followed through on his earlier promise to use interest rates as a weapon to defend Turkey's currency, the lira. While the hike is a bolder-than-expected move designed to jolt investor interest, Basci is still, in effect, using a sword to fight off a barrage of artillery as a wrenching political crisis continues to erode investor confidence.

Turkey has been desperately trying to stem the plunge of the lira, which has declined about 10 percent against the U.S. dollar since the start of the year. Like several other once-celebrated emerging economies, Turkey has seen a rapid outflow of short-term portfolio investment that Ankara had been heavily relying on to help cover its burgeoning current account deficit, totaling $60.8 billion, or roughly 7 percent of gross domestic product, for January to November 2013.

The capital flight has been driven in part by the U.S. Federal Reserve's withdrawal of stimulus measures, which has limited Turkey's access to cheap liquidity. With the Federal Reserve's Jan. 29 announcement that it would again reduce its monetary stimulus, Turkey is now applying all of its tools to stabilize the lira, even with the knowledge that the move is unlikely to have a lasting impact. This is because Turkey's financial troubles have been greatly exacerbated by a deep-rooted power struggle that is only going to intensify in the lead-up to local elections in March, presidential elections in August and parliamentary elections in 2015.

Foreign investors have been chiding Turkey's government for its unorthodox method of defending the currency, until now consisting mostly of foreign exchange auctions and withdrawals from the central bank in order to avoid raising interest rates, a move the government feared would limit growth. But Turkey's government has also been operating under heavy political constraints, resulting in swings in both its economic and political behavior. In this particularly volatile election season, Turkish Prime Minister Recep Tayyip Erdogan has been loath to turn to measures that would slow economic growth and thus undermine his party's standing. 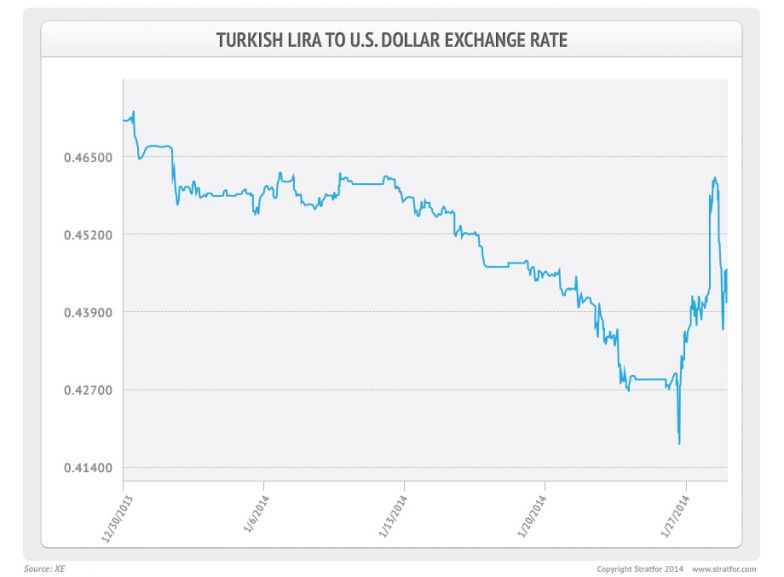 In the days leading up to the central bank decision to raise the interest rate, Erdogan remained publicly defiant, urging the central bank to stand strong and not give in to the so-called interest rate lobby, which he charged with trying to undermine Turkey's growth. When nationwide protests spun up from a Gezi Park demonstration in 2013, Erdogan declared war against the same nebulous interest rate lobby, which he accused of fanning the demonstrations out of greed and desire to topple the government.

Erdogan's distrust of high interest rates stems from a much deeper political paranoia. Perhaps the defining moment of Erdogan's political career was the 1997 military coup that ousted the Welfare Party, the predecessor of Erdogan's Justice and Development Party, from power. Erdogan, who was mayor of Istanbul at the time, was sentenced to prison for 10 months for reciting a poem that criticized the army. This was also a very volatile period for the Turkish economy, with the country facing chronic double-digit inflation and staggeringly high interest rates on foreign loans to cover a soaring budget deficit. Members of Turkey's traditional secular elite who ran the country's largest banks were accused of being debt profiteers during the crisis, making Erdogan all the more determined to write off debt, contain inflation and raise a new economic power elite when he came into power in 2002.

In vilifying high interest rates against the prevailing economic consensus on how to deal with the problem, Erdogan is (rationally or not) trying to warn against a repeat of the past that would empower his old adversaries. The crop of economic elites that Erdogan worked hard to empower over the past decade now find themselves targeted by a cutthroat corruption probe launched by his own party's former allies, jeopardizing years of work and with it, Erdogan's legacy. The Gulen movement, whose powerful network in Turkey's judiciary, police forces, media and government was once instrumental in bringing the Justice and Development Party to power, is intent on seeing Erdogan cut down to size in upcoming elections.

Exacerbating Erdogan's fears is a concern that the Gulenists will quietly forge an alliance of convenience with Turkey's old secular elite to weaken and fracture the ruling party. Even as the central bank is straying from Erdogan's line to pursue a more conventional monetary policy, this is a power struggle that will only intensify in the coming months and thus continue to undermine investor confidence in Turkey.