Letter from Ethiopia: Down from the Mountaintop

Editor's Note: This is the first installment of a three-part letter from a trip around the Horn of Africa.

It is remarkable to me how much a basic geographic characteristic like elevation can condition the experience of a nation. Distant places that happen to lie at the same altitude can be so similar to each other and yet diverge so sharply from lowlands only a short distance away. Ethiopia is a classic example of this. Its borders encompass the entirety of the Ethiopian Highlands — a massive dome of rock — and also some of the lowlands around it.

The country's altitude is, in one sense, a blessing: Ethiopia's rugged terrain and elevation make it a natural fortress, and its fractured geography means that the country encompasses a variety of climates, ecological niches and cultures. 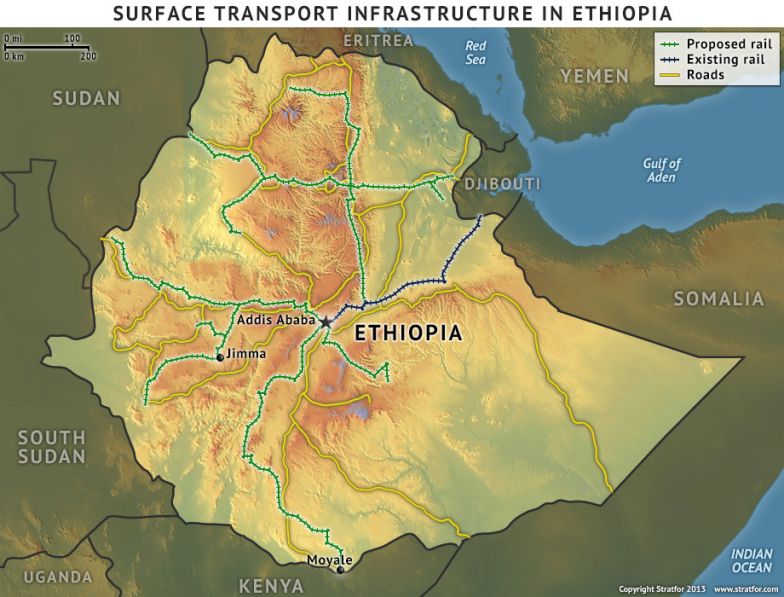 This blessing, however, is limited. Ethiopia's fractures and variety also mean that it inclines toward national fragmentation. Because of this, the country is engaged in a nearly continuous debate about what the very concept of an "Ethiopian nation" means. This is at the root of much of the violence, oppression and poverty that have dogged Ethiopia for much of its modern history.

For me, living in Ethiopia is like living in a laboratory of nations. Identity in the Ethiopian Highlands is still precipitating from its different constituent parts and, living here, I can see Ethiopian-ness in formation. Ethiopia's elites present an idea of Ethiopia as a predominantly Christian nation founded deep in antiquity by the descendants of Solomon of Israel and the Queen of Sheba. They acknowledge that other ethnicities and language families exist but see these identities as footnotes to the main story of the great Ethiopian nation. Ethiopia's green, yellow and red flag encapsulates this: red for the blood shed for the nation, green for the land and its fertility and yellow for the harmonious relations between ethnic groups.

This broad idea of Ethiopian identity has always reminded me of China. In China, too, an imperial state rules over a constellation of ethnic groups. Both Ethiopia and China try their best to foster a sense of cultural belonging in the interest of unity. But in Ethiopia, as in China, the specter of separatism looms large.

Ethiopia has attempted to relieve the pressure from its ethnic factions by creating a federal system that recognizes the right of ethnic groups to claim full independence. This, however, only serves to camouflage Ethiopia's true, strongly centralized system of government. This contradiction underscores the struggle of modern Ethiopia and the continued reality that ruling the country is an interminable exercise in nation-building.

Traveling Around the Horn

In an effort to understand more about Ethiopia and its identity, I made my first major trip out of Ethiopia's highland capital of Addis Ababa into the lowlands of the Horn of Africa — Ethiopia's near-abroad.

As we left Addis Ababa, our bus wound slowly out of the hills and into the heartland of Ethiopia's ethnic Oromo people. Seeing this landscape, it was obvious to me why Ethiopia's nineteenth-century rulers chose Addis Ababa as their capital. They were ethnically Amhara Christians and Addis Ababa was ideal for them because the city literally overlooked their dominions (the Kingdom of Shewa), which lay downhill, giving them strategic dominance over their subjects.

Our bus wound its way down out of this highland fortress and signs soon appeared that we had left the heartland of Ethiopian Christianity and entered a distinctly Muslim world. This area was dominated by ethnic Oromos — primarily Muslim and rural. This world was different from the northern regions I had become accustomed to and the Christian Amhara and Tigray.

The Oromo landscape reminded me strongly of another highland thousands of miles away where I had spent a lot of time — the plateau of central Mexico, where the vegetation is green but sparse, dappled with brown. I passed familiar plants too — what looked to me like nopal cactus and agave.

As I traveled down out of the highlands I noticed that large settlements were conspicuously absent. Ethiopia is still a largely agricultural nation and it is in the countryside that ethnic identities are strongest. It is also here that ethnic injustices are most keenly resented. People in Addis Ababa, by contrast, tend to identify primarily as "Addis Ababan" — as cosmopolitan urbanites. Many are even of mixed ethnic ancestry. But Addis Ababa is small and its hinterlands vast.

Camels along the side of the road from Addis Ababa to Harar. (Stratfor)

After about ten hours on the bus, we arrived at the city of Harar, known locally as Gey. Here the landscape was still green but starting to show signs of transitioning into desert. Camels appeared along the side of the road, both in the flesh and painted on the garish walls of roadside diners.

In the ethnic Harari language, the word Harar simply means "city." I suppose that means that the "Harari people" are the "city people." Nowadays Harar is no more than a town by most definitions, but historically it was a commanding settlement that presided over a Somali hinterland.

The stepfather of famous Ethiopian monarch Haile Selassie ruled over Harar. Selassie claimed to be half Oromo and half Amhara, and modern Harar is strongly multicultural. It sits upland, however, of a region inhabited by ethnic Somalis. The borders of the modern, feeble state of Somalia do not completely encompass the nation of Somalis. Much of this ethnic group actually lives within Ethiopia's borders. Here people use the word "Shewan" — after the defunct Kingdom of Shewa — to describe their northern, Christian neighbors, always with a note of disdain or resentment.

A mosque in the city of Harar. (Stratfor)

The city Harar boasts 82 mosques and only three Christian churches. The prime location for worship, however, is occupied by a church that sits on the former site of a mosque. It was Ethiopian Emperor Menelik II that converted the mosque into the church as part of his massive project of Ethiopianization. Today, Muslims in Ethiopia revile him as a Christian chauvinist, and even Haile Selassie is remembered as an oppressor of Muslims.

The tensions between Christians and Muslims were not apparent to me during my time in the city, but locals were still keenly aware of the centralizing projects of these two monarchs. They are also keen to note that over half of the nation's population is Muslim, belying the "Christian" character of the Ethiopian state. The alliance between church and state is broadly visible throughout the city, whose churches are draped in the national colors of green, red and yellow.

From here I was to proceed deeper into the Muslim world — to the border with neighboring Somaliland.