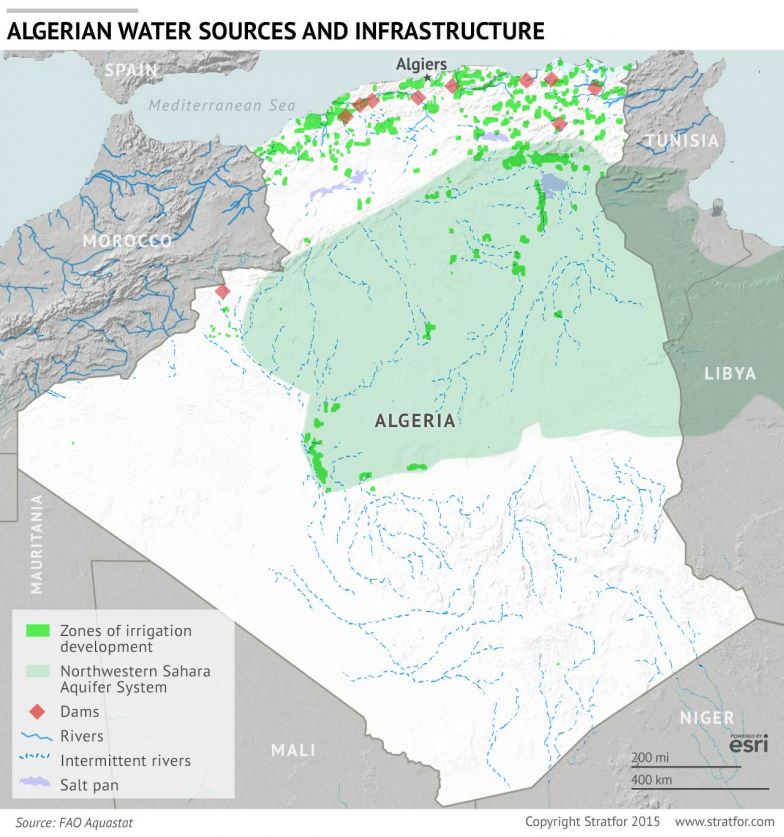 Algeria's per capita water availability is less than 300 cubic meters per year, which is well below the threshold for the U.N. definition of water poverty. Many citizens simply do not have daily access to running water. The country's water is also unevenly distributed, with most of its surface water resources concentrated in the north, along with the bulk of its population.

There is water in the sparsely populated central and southern parts of the country, but it is primarily groundwater — and it is at risk. Not only are the aquifers beneath Algeria's desert very slow to recharge, the non-renewable water drawn from them is sometimes called fossil water because it has sat undisturbed in the aquifers for millennia. Algerian groundwater withdrawals are roughly double the annual recharge rate, and the problem is spreading: Even aquifers farther north are showing signs of diminishing quantity and quality.

Algiers' water management strategy focuses on making the most of existing water resources through redistribution, increased storage capacity and enhanced desalination capacity. But for a country with some of the lowest water prices in the region, Algeria relies heavily on expensive water management solutions. Without government investment, the availability and quality of Algeria's water supply will continue to decline. However, the government cannot foot the bill alone — private investment will be necessary to safeguard the country's water supply.

Climate changes — specifically, higher temperatures and less rain — are predicted for the coming decades in Algeria and the wider region. At the same time, the population is expanding and urbanizing, consuming more water than ever before. Greater desalination capacity, improvements to existing infrastructure and additional water conveyance projects — created through cooperation between the public and private sectors — could alleviate some supply concerns, especially in urban areas. But, if short-term budgetary problems lead Algiers to neglect the country's water infrastructure, the longer-term implications are dire. Declining quality, infrequent availability or more dependence on expensive water from desalination plants will contribute to the potential for social unrest.