Argentina's President Fends Off Challenges from the Intelligence Service

Supporters listen to Argentine President Cristina Fernandez de Kirchner in the Palmeras courtyard of the government house in Buenos Aires on Jan. 30.

Argentine President Cristina Fernandez de Kirchner announced Jan. 26 that she would reform her country's civilian intelligence organization, the Intelligence Secretariat (SI). Soon after, the office of the president said it would submit a draft law to reform the SI to the Senate on Feb. 3. In addition to changing the organization's name to the Federal Intelligence Agency, the reform is expected to significantly weaken the SI by limiting its ability to gather signals intelligence, revealing a wider political dispute.

Fernandez's motivations for reforming the SI are not completely clear, but concerns that criminal charges could be brought against her and other members of the government once they leave office might have been a factor. Moreover, though the reform appears to be immediately motivated by concerns over the SI's loyalty to Fernandez, it may significantly affect how the Argentine security apparatus functions long after her term in office ends.

Although the Fernandez government has not released the details, the reforms would drastically alter the way the SI functions. Previously, the organization could engage in domestic intelligence collection after obtaining a federal judge's approval, but the new reform will likely require more steps and more oversight. A federal judge would have to request a warrant to conduct intelligence gathering from the prosecutor general's office, and the actual collection process would be either conducted or overseen by that office. The president appoints the prosecutor general, and approval of the reform would grant this post, currently filled by Gils Carbo, significant intelligence collection abilities for the remainder of Fernandez's presidency and likely into the next presidency.

The planned reform follows a mass reshuffling of the SI's top leadership. On Dec. 16, Fernandez ordered the removal of Secretary of Intelligence Hector Icazuriaga and Deputy Director Fernando Larcher, both longtime ruling-party allies. Icazuriaga and Larcher had been appointed to the positions more than a decade earlier, and according to unconfirmed reports, had worked closely with former President Nestor Kirchner, the late husband of Fernandez. Under the direction of Icazuriaga and Larcher, the SI provided the government with intelligence on political opponents, including labor organizations and members of rival political parties. The reshuffle also claimed Director of Operations Jaime Stiusso, who had served in the organization since 1974.

The Argentine government filled the leadership positions with individuals closely tied to the ruling party. ​Oscar Parrilli, Fernandez's former chief of staff, was named the new director of the organization, and Juan Martin Mena, a legal official closely linked to current Justice Minister Julio Alak, was named deputy director. Moreover, unconfirmed reports indicate that Fernando Basanta, an official loyal to Fernandez's son Maximo Kirchner, is now in direct control of the SI's finances. Basanta is part of La Campora, a political patronage network crucial to securing political support within the government for the ruling Front for Victory party. Kirchner has direct control over the network that has significantly increased its presence in state ministries and companies over the past several years. 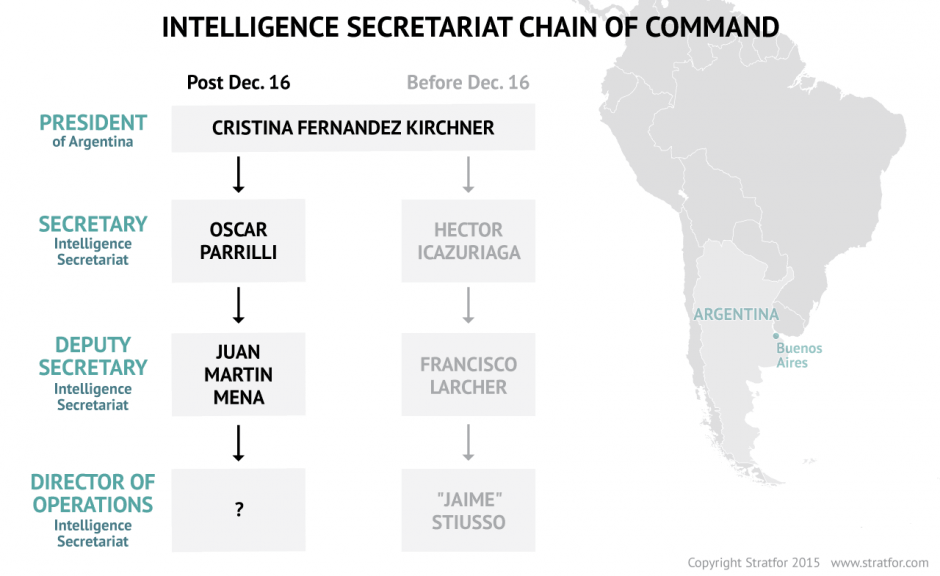 The SI has reportedly been split into factions for the past two years. Some are loyal to the ruling party and others are more difficult to control. For example, SI interior protocol chief Fernando Pocino was allied with the government (allegedly through his close connections with former Defense Minister Nilda Garre), but Stiusso and Larcher were more confrontational. Nestor Kirchner reportedly used the SI's loyalist faction, which at the time included Stiusso, as a key tool to collect domestic intelligence and manage political allies and enemies. The information that SI accrued made it a politically powerful organization, albeit one with no strict loyalty to Fernandez. This sense of a lack of loyalty was likely amplified by Stiusso's close cooperation with prosecutor Alberto Nisman, who, before being found shot to death in his apartment Jan. 18, was reportedly set to reveal information he claimed implicated Fernandez and other officials in a cover-up of Iran's role in the 1994 bombing of a Jewish cultural center in Buenos Aires.

Unconfirmed reports indicate that Fernandez saw the SI as a potential threat because its dissident wing allegedly provided federal judges with information to pursue criminal cases against the president and other high-ranking officials. A report from July 2013 also claimed that both Larcher and Stiusso had met with Sergio Massa, a defector from the ruling party who will be a principal challenger to the ruling party as the Renewal Front party's nominee in the October presidential elections.

The SI's lack of loyalty threatens Fernandez in several key ways that are particularly consequential in an election year and as she prepares to leave the presidency. An unconfirmed report claims that the SI failed to inform Fernandez that Massa would run in the October 2013 legislative elections. Moreover, once Fernandez leaves office, the outgoing government will lose immunity from prosecution. Fernandez is currently being investigated because a hotel firm she owns was allegedly involved in money laundering. Four government officials, including the vice president and the justice minister, are also facing criminal investigations. These open cases provide a strong incentive for the government to populate the SI with loyalists. In addition, a report from November indicated that Fernandez was negotiating the appointments of four of the five justices on the National Criminal Court of Cassation, the highest judicial body that hears corruption cases. Taken together, the shakeup at the SI and possible judicial appointments indicate that Fernandez is trying to secure judicial immunity for herself and her loyalists for when they leave office.

The fate of the SI and its potential to pose problems for future governments depend on how deep Fernandez's intelligence reform will go. Passing the legal draft of the reform will likely require only minimal negotiations because such draft laws need no more than an absolute majority for passage. Because the Front for Victory party controls 39 of the 72 seats in the Senate and 130 of the 257 seats in the lower house, it is probable the changes will be passed quickly. If the reform extends only to the agency heads, then it is possible an incoming administration will be able to simply undo many of Fernandez's efforts by replacing the organization's leaders. However, if Fernandez positions members of La Campora deep into the organization, it could keep it loyal to the Front for Victory well into another presidential administration. Even if the government manages to remove members of La Campora from the SI in the coming years, it will still need to reverse the reform's institutional changes, a process that will likely take some time.