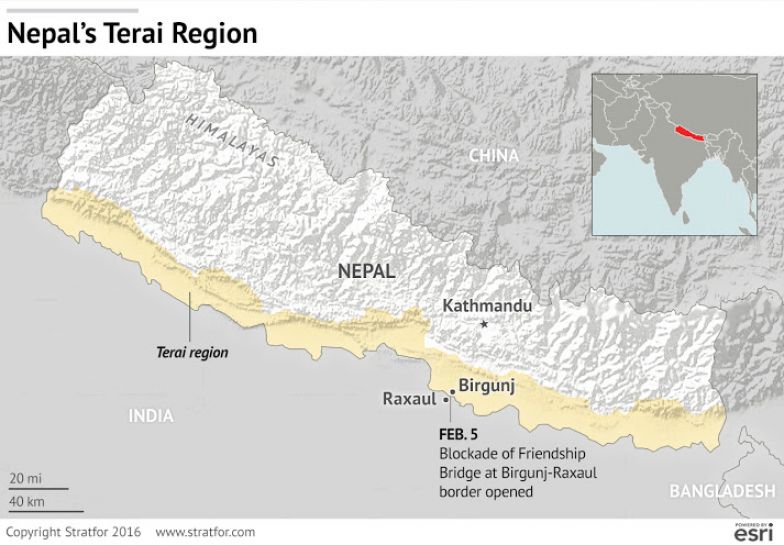 For four months, the India-Nepal border was under a blockade that slowed the import of key goods into the landlocked nation down to a trickle. The blockade ended Feb. 5 but the conditions that produced it remain. The restriction barring trade into Nepal was the work of the country's three-party United Democratic Madhesi Front, which is against the newly adopted Nepalese Constitution. Starting in late September, the border shutdown limited the transport of fuel, medicine and other essential goods.

The constitution in question — deliberated over for nearly a decade following the Nepalese civil war — mandates carving the former Hindu kingdom into several federal provinces. But the Madhesi ethnic group fears that splitting its Terai lowland homeland, located along the Indian border, will marginalize it relative to the upper-caste groups that have historically dominated Nepalese politics. This is not just a domestic issue: Some in Nepal believe India had a hand in the blockade as well, and not without reason. India is looking to maintain its influence in Nepalese politics through the Madhesi, and Nepal, for its part, has trouble escaping the influence of a country it so heavily depends on for trade.

Whether India directly aided in blocking trade to Nepal, it has a clear rationale for supporting the Madhesi: If the pro-Indian Madhesi can gain greater representation in Nepal's parliament, India will have more influence over its northern neighbor. India must maximize its influence across the Indian subcontinent and hamper China's penetration into Nepal and South Asia. However, the blockade has only intensified concern over China's expanding influence because Chinese-owned companies stepped in to fill the oil shortages created by the blockade. In October, China granted Nepal 1.2 million liters of fuel for immediate use. Meanwhile, Nepal Oil Corp. and PetroChina — both state-run companies — signed a memorandum of understanding for future trade. If that preliminary document leads to a formal trade agreement, it will break India's 40-year monopoly on Nepal's oil imports.

Nepalese Prime Minister Khadga Prasad Sharma Oli decision to visit India rather than China reflects Nepal's limited options as a small state caught between two larger powers. The prime minister is eager to keep the peace with Nepal's powerful neighbor to the south, but meanwhile China will keep pushing for trade opportunities in Nepal and throughout the region. Chinese efforts may even be helped by rampant anti-Indian sentiment in the small country: As the Nepalese public grows to resent what it perceives as Indian attempts to bully its neighbors, China may have an opportunity to deepen its involvement in South Asia. If so, India's strategic attempt to influence Nepalese politics in the short term, whether directly or indirectly, may actually compromise some of its influence in the region.

Understanding Economic Espionage: The Past