A container ship is docked at the Mexican port of Lazaro Cardenas in Michoacan state on April 4, 2017. Distributed ledger technology has the potential to revolutionize global shipping.

There are a handful of technologies that, if widely adopted, have the potential to revolutionize how the world works. Distributed ledger technology is one such invention, and shipping is an industry that would benefit from adopting blockchain and other distributed ledger technologies. Given shipping's struggles and its vulnerability to geopolitical risk, creating a transparent, distributed ledger that would remove middlemen and increase efficiencies could help the industry evolve and improve economically. The technology could be applied to numerous stages of the shipping process, including tracking cargo and issuing bills of lading. Additionally, blockchain can provide a transparent record for all stakeholders, which would reduce errors, limit corruption and eliminate the need for intermediaries.

Because the shipping industry is so intertwined with the global economy and trade, a World Economic Forum study from 2013 postulates that the benefits of reducing supply chain barriers could boost global trade by 15 percent and global GDP by 5 percent. Implementing blockchain is a potential solution to supply chain barriers. To reap the benefits, however, the constraints of widespread adoption must be overcome. This challenge highlights a broader struggle to influence global standards across many emerging technologies, a struggle that often pits the United States (more broadly the West) against China. The use of blockchain in global shipping is no different.

Global shipping seems poised to be among the first industries to take advantage of distributed ledger technology. However, as first movers seek to sort out the winners and losers ahead of policy and industry standardization, competition among different blockchain platforms could slow the overall rate of adoption and limit the technology's benefits.

Some of the Players

In early August, after a year of trial applications, Danish shipping group Maersk and IBM launched TradeLens, a collaborative effort providing a blockchain platform for global shipping. With 94 agencies, ports and other shipping companies already participating in TradeLens, its introduction marked one of the biggest, highest-profile launches of a blockchain platform in global shipping. But it is by no means the only one. Numerous pilot projects are up and running with support from some of the industry's largest players. A short list of ventures includes Blockfreight out of Australia, Skuchain and Hijro out of the United States, Provenance and MTI in the United Kingdom, SmartLog in Finland, and Wave, based in Israel. All these companies are working on solutions to tackle different parts of the supply chain. The Chinese company Yuanben has developed a blockchain platform as part of its country's Maritime Silk Road, a component of Beijing's Belt and Road Initiative. China's Alibaba also has created an application that uses blockchain to track various aspects of logistics operations.

Questions about the technology's scalability and interoperability remain to be answered. A number of platforms and initiatives will work to improve interoperability and compatibility, and they will likely be winnowed down somewhat over the next five to 10 years. Too many players that can't be used together could force ports, shipping companies and other operators to facilitate multiple platforms, which would limit the efficiency benefits that could come from the widespread adoption of fewer platforms. It will be important to watch the larger operations like Maersk and IBM to see what kind of support they get from the industry and how widely their platforms are adopted. Because Maersk's involvement raises questions of potential conflicts of interest, TradeLens may have trouble attracting other shippers to the platform, though smaller lines such as Pacific International and Hamburg Sud already have agreed to use TradeLens.

On a similar note, there is debate within the shipping industry whether blockchain platforms should be public or private. Public platforms offer connectivity and interoperability, both of which are necessary to spread the technology widely enough to substantially increase efficiency. On the flip side, private blockchains are easier to customize and could benefit individual companies or operators by allowing them to meet specific demands, but they would be far more difficult to implement on a global scale. 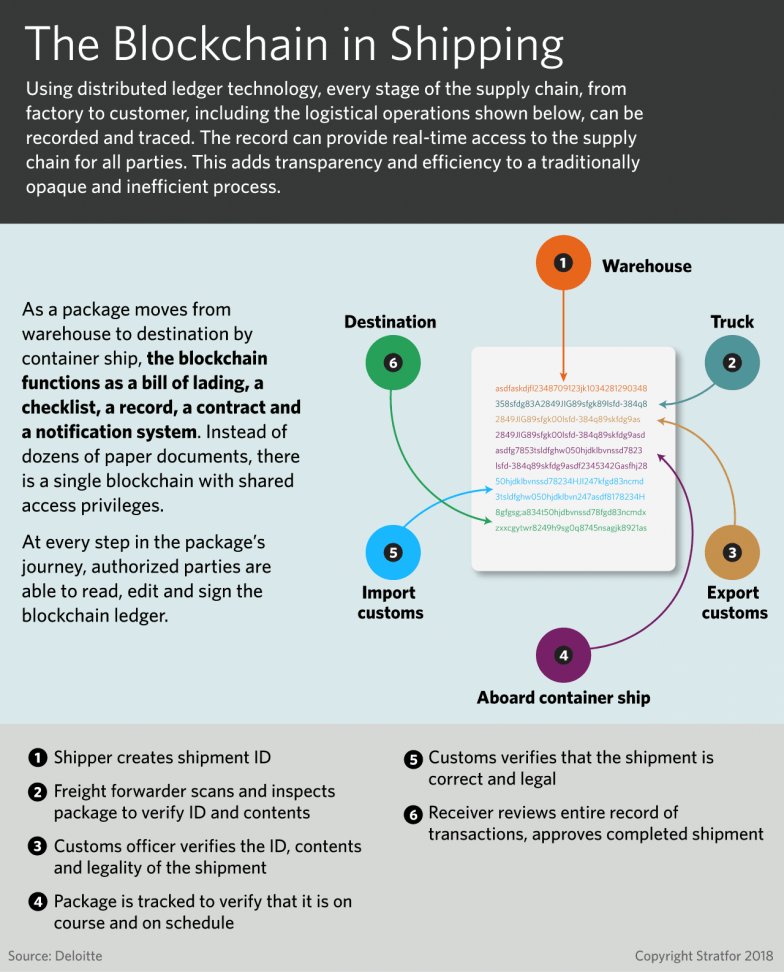 The lack of an industry standard remains a hurdle to widespread adoption as operators wait to see which platform emerges victorious. At the same time, some participants will scramble over the next five years or so to become the biggest and the quickest in order to set a de facto standard. Because policy and standardization often lag behind technological developments, we will see first movers, both on the corporate and even national levels, compete to grab the largest market shares. Though port operators probably will be forced to accommodate multiple platforms as the technology starts to become more widely used, large port operators could also help declare winners and losers as any blockchain application chosen by these massive trade nodes would have an advantage over rival platforms.

As with many emerging technologies, the governance of the systems once they are up and running also remains an uncertainty. And as with many disruptive technologies, blockchain and shipping are setting up as a potential struggle for standardization control and industry dominance between China and the West.

Who Is the Kingmaker?

Any distributed ledger platform looking for global success must win the support of the Chinese shipping industry. China accounts for 17 percent of the world's exports and roughly 12 percent of the world's imports. While the United States and the European Union also command similar shares of global trade, China is home to seven of the world's 10 largest ports. All three Chinese giants — Tencent, Baidu and Alibaba — are working to compete to develop different blockchain technologies across a wide variety of sectors. Beijing has long supported the country's shipbuilding and shipping sectors. Though there are TradeLens participants based in Hong Kong, it is more likely that Chinese ports and shipping companies will opt to use Yuanben's, Alibaba's or another Chinese company's blockchain platform, or a combination of Chinese platforms, especially given that trade and infrastructure are key strategic components of Beijing's Belt and Road Initiative.

This likelihood does not nullify the possibility of a global platform in the future. However, it will likely necessitate cooperation or partnership with Chinese operations, much like we see in other emerging technology sectors, such as electric vehicles. However, collaboration with China on distributed ledger technology may be more difficult to achieve than with some other technologies. Like technologies based on artificial intelligence, distributed ledger technology is grounded in data, and the European Union and the United States are increasingly hesitant to share data and intellectual property rights with Beijing. Though the widespread use of a limited number of platforms would result in the greatest efficiency gains, the technology is more likely to be implemented piecemeal over the next several years, with ports and operators using multiple platforms. As some platforms are weeded out and others succeed, even more collaboration will occur between companies and across national boundaries, though concerns over intellectual property rights will maintain a wariness in the West about collaborating with Chinese firms despite China's overwhelming role in global trade.