Editor's Note: This is the first installment of a two-part series on the relationship between Central Asia and Afghanistan and the expected effects of the U.S. drawdown in Afghanistan on Central Asian security. Click here to read Part 2.

Contrary to popular perception, Central Asia is not likely to see an immediate explosion of violence and militancy after the U.S. and NATO drawdown from Afghanistan in 2014. However, Central Asia's internal issues and the region's many links with Afghanistan — including a web of relationships among militant groups — will add to the volatility in the region.

Central Asia has numerous important links to Afghanistan that will open the region to significant effects after the upcoming U.S. and NATO drawdown. First and foremost, Central Asia is linked to Afghanistan geographically; Turkmenistan, Uzbekistan and Tajikistan share borders with Afghanistan that collectively span more than 2,000 kilometers (about 1,240 miles). The Afghan border with Tajikistan, along the eastern edge of Afghanistan, makes up more than half of that distance, at 1,344 kilometers. The borders with Turkmenistan (744 kilometers) and Uzbekistan (137 kilometers) run along Afghanistan's western edge. Most of the Tajik-Afghan border is mountainous and therefore poorly demarcated, and the topography of Afghanistan's frontiers with Turkmenistan and Uzbekistan is largely desert. 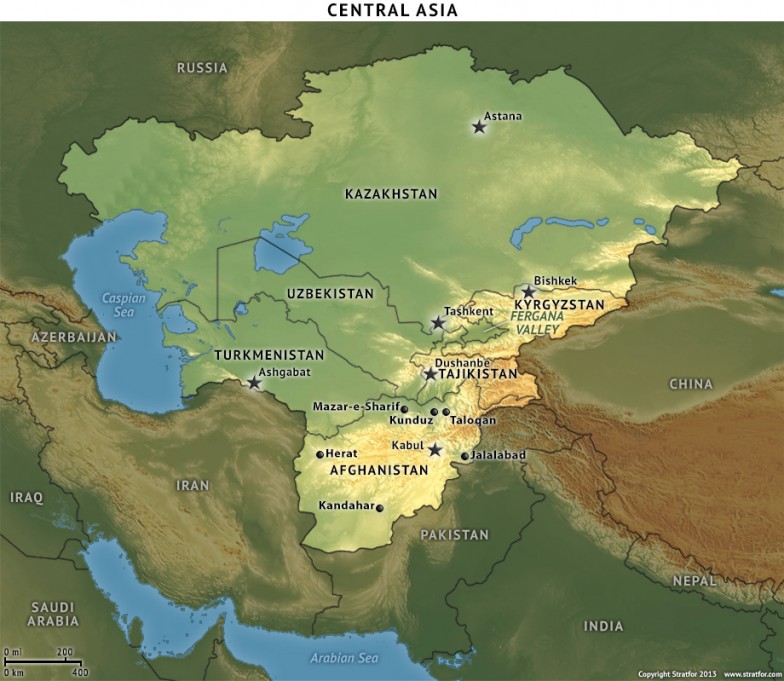 Central Asia and Afghanistan also have important demographic ties. Afghanistan is an ethnically diverse country, with more than a dozen ethno-linguistic groups represented substantially in the country's population of slightly more than 31 million. The Pashtuns are the largest such group (42 percent), with Tajiks (27 percent), Hazaras (9 percent), Uzbeks (9 percent) and Turkmen (3 percent) constituting significant cohorts as well. The Tajik, Uzbek and Turkmen populations are concentrated primarily in northern Afghanistan and are largely contiguous to their ethnic brethren across the borders in Tajikistan, Uzbekistan and Turkmenistan.

Historically, Afghanistan's borders with the Central Asian states did not exist in a modern sense; rather, they consisted of frontier areas that constantly shifted hands, given that warfare in the region was the norm. Indeed, the area comprising these states and northern Afghanistan was, at various times, part of a single state or empire. This changed with the coming of the Great Game between the Russian and British empires in the beginning of the 19th century. Russia's imperial expansion into Central Asia coincided with the growth of the British domain over India, and the result was the establishment of a buffer zone in what is now Afghanistan. This set the borders of Afghanistan as we know them and — with the transition from the Russian Empire to the Soviet Union in the early 20th century — led to a closing off of the borders between Central Asia and Afghanistan for the first time in history. The ensuing 70 years of Soviet rule in Central Asia created significantly different political and cultural identities among the Tajiks, Uzbeks and Turkmen in the Soviet Union and those within Afghanistan, given the vastly different governing structures. 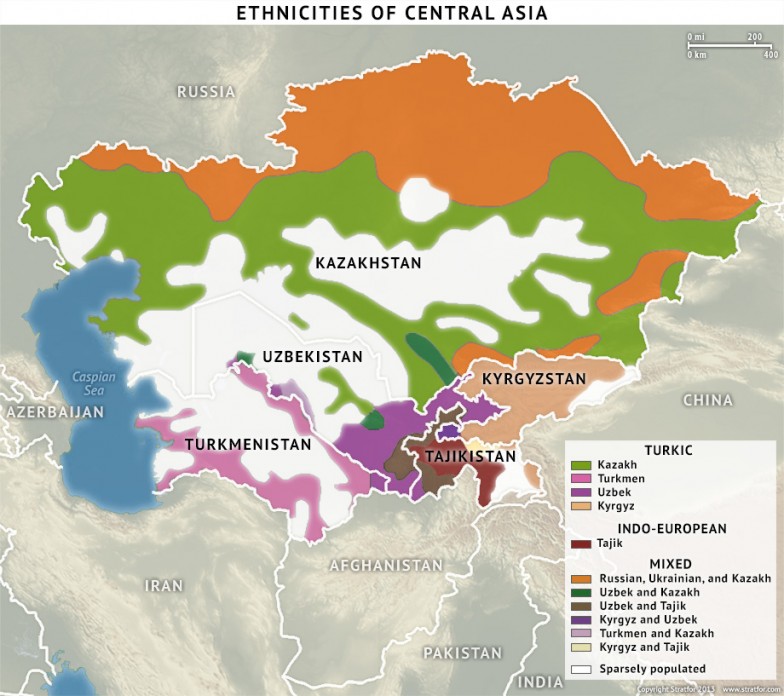 However, ties were far from severed. Because of the geography of the border areas, interaction and movement between the peoples of Central Asia and Afghanistan was difficult to stop. Furthermore, the Soviet invasion of Afghanistan from 1979 to 1989 created direct interaction between the Soviet Tajiks, Uzbeks and Turkmen and their ethnic cohorts in Afghanistan, with many of the former participating in Soviet military operations (in large part because of their ethno-linguistic ties). The Soviet Central Asians' exposure to their more tribal and religious Afghan counterparts (with certain groups becoming increasingly radicalized as a result of the invasion and the growing presence and strength of the mujahideen) also created a lasting impression among many Central Asians. 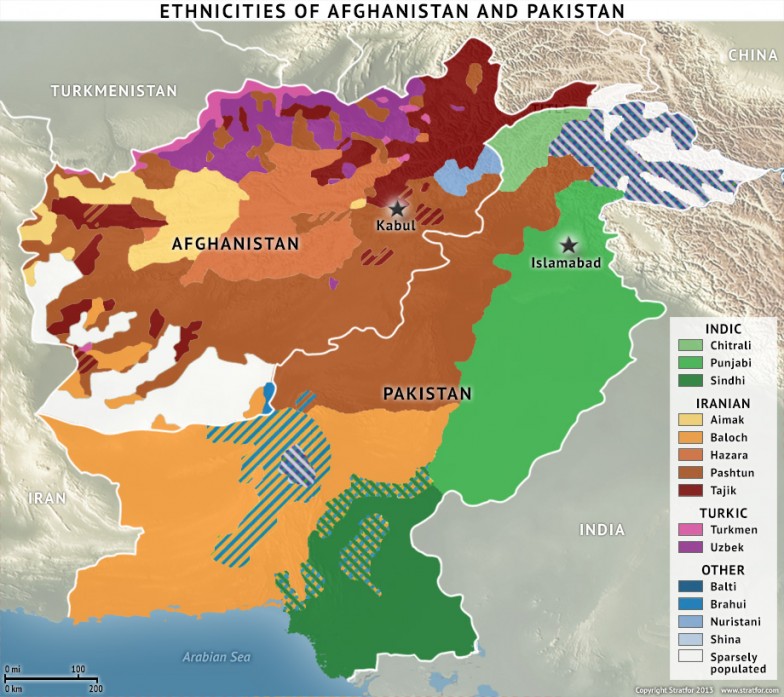 Ethnicities of Afghanistan and Pakistan

The Soviet withdrawal from Afghanistan and the collapse of the Soviet Union only two years later created a dramatically new environment both within Central Asia and within Afghanistan. In 1991, the Central Asian states of Turkmenistan, Uzbekistan and Tajikistan (along with Kyrgyzstan and Kazakhstan farther north) became independent states for the first time in modern history. Despite official Soviet policy to suppress religious activity, many Central Asians were practicing Muslims and even Islamists, which explains how Islamism took root in the region shortly after the Soviet collapse. Meanwhile, Afghanistan descended into internal conflict with the withdrawal of the Soviets and the declining assistance from the United States for the mujahideen. The eventual result was the rise of an Islamist group, deriving from the Pashtuns based in southern Afghanistan, known as the Taliban.

Beginning in 1994 and starting from their stronghold in Kandahar, the Taliban were able to spread their influence and control over much of Afghanistan. It took the movement only months to take control of most southern provinces from various Pashtun warlords, and they quickly made progress in capturing regional centers in the west and east of the country like Herat and Jalalabad. In 1996, the Taliban were able to wrest control of Kabul from the central government led by President Burhanuddin Rabbani and Defense Minister Ahmed Shah Massoud, both ethnic Tajiks. Then, in the late 1990s, the Taliban went after the last bastion of resistance in northern Afghanistan, coming into conflict with the concentration of relatively moderate Tajiks and Uzbeks, as well as the Shiite Hazaras, who all opposed the Taliban's brand of Sunni Islamism and aims for territorial control.

The rise of the Taliban in Afghanistan coincided with a number of significant developments in Central Asia. The post-Soviet regimes in the region had no experience of ruling their territories directly. Moreover, Central Asia faced immense economic and political challenges as Russia withdrew subsidies and the Soviet military-industrial complex with which the Central Asians were so integrated collapsed. Tajikistan descended into civil war almost immediately, when groups from the Kulyabi and Khujand regions known as the Popular Front were pitted against an array of opposition elements including Islamists, democrats and the Pamiri clan from the east collectively known as the United Tajik Opposition. Outside groups got involved in the civil war, supporting the different sides along political and ideological lines. Russia and Uzbekistan supported the secular and neo-communist Popular Front, while many Tajiks in Afghanistan supported the United Tajik Opposition, particularly the Islamist elements of the Islamic Renaissance Party of Tajikistan.

One of the groups that joined in the fighting alongside the United Tajik Opposition and the Islamic Renaissance Party of Tajikistan would eventually become known as the Islamic Movement of Uzbekistan, led by Juma Namangani and Tahir Yuldashev. Namangani — a seasoned military commander who had previously served in the Soviet army — and Yuldashev were Uzbeks from the Fergana region of the country, traditionally home to some of the most pious Muslims within Uzbekistan and Central Asia. Yuldashev and Namangani led a protest against the new Uzbek President Islam Karimov in the republic's early days of independence, calling for Karimov to establish Sharia in Uzbekistan. When Karimov refused, the two leaders led several attacks, including bombings, armed assaults and kidnappings, against government and security targets in Uzbekistan. The two then fled into Tajikistan to escape Uzbek forces and join the Islamic Renaissance Party of Tajikistan against the Uzbek-supported Popular Front. While the Popular Front — led by current Tajik President Emomali Rakhmon — eventually won the civil war and the Islamic Renaissance Party of Tajikistan was incorporated into the government in a power-sharing deal, the Islamic Movement of Uzbekistan continued operations against the Uzbek regime from its base in the remote and mountainous Tavildara Valley in eastern Tajikistan.

From 1999 to 2001, the Uzbek militant movement conducted a series of attacks in Uzbekistan and in Uzbek enclaves in southern Kyrgyzstan in the Fergana Valley. During this time, the Tajik government periodically pressured Namangani to leave Tajikistan and seek refuge in Afghanistan. It was at this point that Namangani linked up with Mullah Mohammad Omar, the leader of the Taliban, and with Osama bin Laden and al Qaeda, to which Mullah Omar had given sanctuary in Afghanistan. The Taliban gave refuge to the Islamic Movement of Uzbekistan in exchange for the Uzbek group's participation in Taliban offensives against the Tajiks, Uzbeks and Hazaras in northern Afghanistan.

At that point, elements in northern Afghanistan led by Rabbani, Massoud, Uzbek warlord Abdul Rashid Dostum and Hazara leader Abdul Karim Khalili had created an anti-Taliban front known as the Northern Alliance. This created an amalgam of groups vying for power in northern Afghanistan but traveling and operating across borders. On one side was the Northern Alliance, supported by Uzbekistan, Russia and Iran, and on the other was the Taliban with support from al Qaeda and the Islamic Movement of Uzbekistan. The result was violence, lawlessness and a web of militancy and transnational linkages that made the borders between Afghanistan and the Central Asian countries wide open from a logistical and operational standpoint, harking back to the chaos of the pre-Soviet era.