Central Asia: The Complexities of the Fergana Valley

Editor's Note: This is the first installment of a two-part series on the Fergana Valley region of Central Asia, its complex demographics and the history and future of conflicts in the area. Click here for Part 2.

A recent border dispute in the Fergana Valley, the core of Central Asia, highlights the growing tensions in the strategic and contested region. Kyrgyz and Uzbek border patrol units were removed from the Ungar-Too area in Kyrgyzstan's Jalal-Abad region Oct. 2, after a two-week standoff over an alleged Uzbek border incursion into the area. Such incursions, coupled with ethnic tensions and sporadic violence, have become increasingly common in the Fergana Valley region, which is split between Kyrgyzstan, Uzbekistan and Tajikistan.

The valley has long been the population and agricultural heartland of Central Asia. It has also been one of the most unstable areas in the region since the collapse of the Soviet Union due to several factors, including diverse and interspersed populations, complex borders, dwindling resources and religious extremism.

The Fergana Valley is located in Central Asia's southeast corner and is enclosed by the Tian Shan Mountains to the north and the Gissar-Alai range to the south. The valley's approximately 22,000 square kilometers (almost 8,500 square miles) of flat plains distinguishes it from surrounding regions in Central Asia, where the terrain is made up of mountains, deserts and treeless steppes. It is also distinguished by its agricultural fertility, due to the Syr Darya River and its numerous tributaries — water resources that are the subject of controversy in the region. The Fergana Valley is a major source of food for Central Asia. Its principal crops include wheat, cotton, rice, vegetables and fruit. 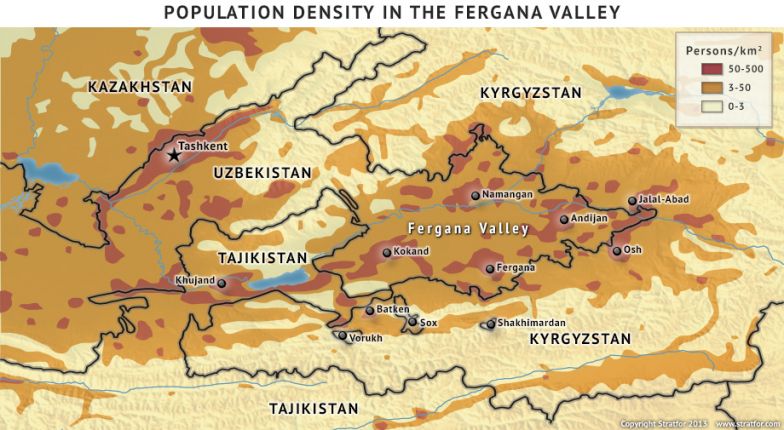 Population Density in the Fergana Valley

This agricultural productivity has made the Fergana Valley the most densely populated part of Central Asia; almost a quarter of the region's total population (14 million out of 63 million) lives in less than 5 percent of the region's total land area. While the population density of Central Asia as a whole is 40.8 people per square mile, in the Fergana Valley it is 1,600 people per square mile. It is also one of the fastest-growing regions within Central Asia, experiencing a population growth of 32 percent in the last 10 years.

The Fergana Valley's population consists mainly of Uzbeks, Kyrgyz and Tajiks. Correspondingly, the valley is split among Uzbekistan, Kyrgyzstan and Tajikistan. However, each of the three countries in the Fergana Valley contains significant minorities of the other two ethnic groups. Further complicating this are several ethnic exclaves in the Fergana Valley, including the Uzbek exclaves of Sox, Shakhimardan, Chong-Kara and Jani-Ayil in Kyrgyzstan and the Kyrgyz exclave of Barak in Uzbekistan. There are also two Tajik exclaves — Vorukh and Kairagach — in Kyrgyzstan. 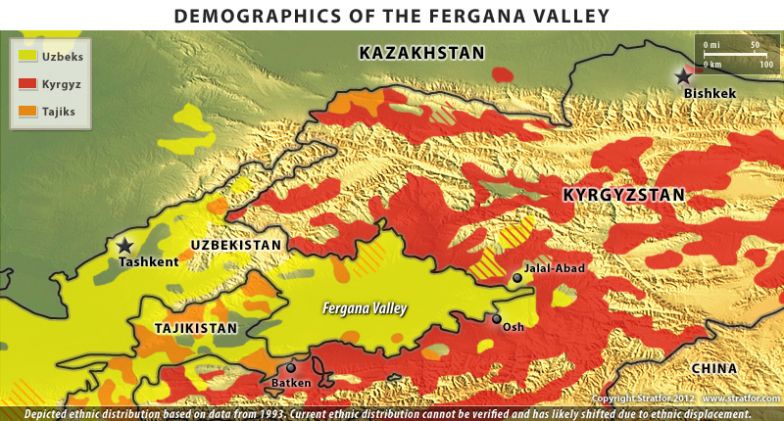 The reason for the complexity of the borders and ethnic distribution in the valley is historical. For most of its history, the Fergana Valley existed under a unified political entity. In the ancient era, it was a part of Transoxiana, a province of the Persian Empire, where it played an important role in the Silk Road trade from China to the Middle East and Europe. In the 13th century it came under the conquest of the Mongols and was incorporated into the Chagatai Khanate. Political boundaries shifted as Turkic groups and Islam spread into the region, but Fergana was always administered as a single unit. In the 18th century, this took the form of the Kokand Khanate, which included eastern Uzbekistan, southern Kazakhstan, and most of Kyrgyzstan and Tajikistan. The penetration of Imperial Russia into Central Asia in the 19th century once again shifted political control in the region. But the Fergana Valley remained intact, shifting to the Fergana province of Russian Turkestan out of the former Kokand Khanate in 1876.

However, the fall of the Russian Empire and the subsequent rise of the Soviet Union created profound changes in Central Asia generally and in the Fergana Valley specifically. The Soviets installed a national delimitation process that grouped the peoples of Central Asia into distinct nationalities, when in previous eras identities were largely based on clan, region or religion (Islam). The ethnolinguistic labels of Uzbek, Kyrgyz or Tajik were thus not widely used until the early 20th century, and clan ties and regionalism are still a major factor today.

Furthermore, borders did not exist in a modern sense, since much of the population — particularly Kazakhs, Turkmen and Kyrgyz — were nomadic, while people defined as Uzbek and Tajik were more settled. The Soviets forcibly settled the populations of Central Asia and established new borders in the region. These borders, designed by Josef Stalin primarily for administrative purposes, were also meant to prevent any future rise of a single political entity in Central Asia with the potential to challenge Moscow's power in the region. Due to its demographic and agricultural heft, the Fergana Valley was for the first time divided among distinct political entities (in this case, the Soviet republics of Uzbekistan, Kyrgyzstan and Tajikistan). However, these divisions corresponded neither to the natural geographic features of the Fergana Valley nor to the new national identities attributed to the peoples of these republics.

These complex borders did not have much practical effect in the Soviet era, given that the entire region was under the centralized control of Moscow and was fully incorporated into the Soviet military-industrial complex, making the borders largely arbitrary in a political and economic sense. However, things changed dramatically in the Fergana Valley with the collapse of the Soviet Union, which led to a wave of nationalism throughout the former Soviet republics, including Central Asia.