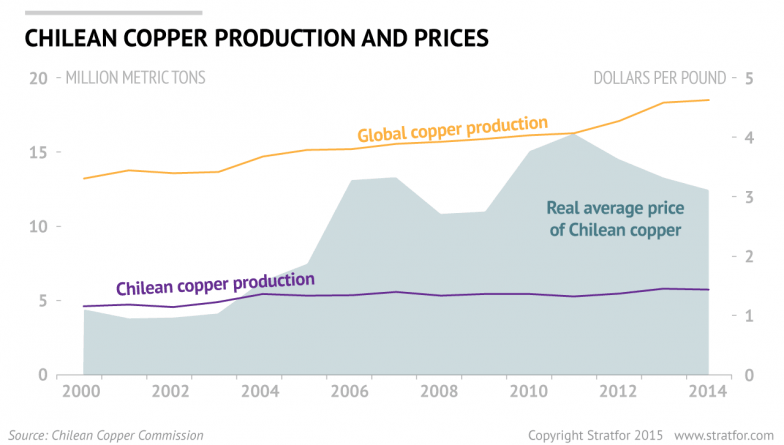 The Chilean government is struggling to preserve output and growth in its crucial copper mining sector amid an economic slowdown. Chile is the top producer of copper in the world, yielding 5.7 million metric tons of the metal per year, more than 30 percent of global output. Roughly 20 percent of government revenue comes from copper, and copper and copper products made up 47 percent of the country's exports in 2014.

However, a decline in Chinese and broader global demand over the past three years caused prices to drop to $3.11 in 2014, taking a toll on Chile's economy and public finances. Chile's GDP growth slowed considerably to 1.4 percent in 2014 after averaging more than 5 percent growth from 2010-2013.

Several of Chile's copper mines are preparing to close between 2014 and 2025, cutting copper production by a highly debated estimated 1.2 million metric tons per year. To compensate, Codelco and private mining firms are expected to expand exploration and activities in the coming years, requiring substantial investment. Codelco announced that it would invest a total of $25 billion over the next five years, largely to maintain production in existing mines.

Meanwhile, the economic slowdown has hobbled the Chilean government's attempts to pass labor reforms, meant to address lingering economic inequality in the country. In a period of weak economic growth, private businesses and opposition politicians are less likely to agree to measures that could threaten future investments. Some mining companies say the reforms could cost companies a total of $3 billion over five years.

Consequently, commercial and business interests and the government will try to maintain copper production over the next year, delaying or possibly even derailing labor reform efforts.