In China, Ulterior Motives in the Fight Against Corruption

Chinese President Xi Jinping is promising to ramp up the state's anti-corruption campaign; however the move is not as altruistic as it may appear, and Xi has much to gain from the expansion. As 2015 ended, China's Central Commission for Discipline Inspection (CCDI), the Communist Party's top anti-graft agency, promised to massively expand the Chinese anti-corruption campaign in 2016. According to the agency, more than 100 inspections are to take place this year — far more than were conducted in any previous year. In addition, at least one anti-corruption inspection is to be carried out on each of the 280 state and Party organizations accountable to the central government by the time the 19th Party Congress starts in 2017. Though the Party's intent to intensify the campaign had been well publicized, the means by which it could be expanded and its exact targets have only recently become clear.

On Feb. 19, Xi completed a tour of each of China's three top state media agencies: Xinhua, the People’s Daily and CCTV. He stressed to the agencies the need for the news media to demonstrate absolute loyalty to the Party, which is increasingly being defined as unquestioning loyalty to Xi himself. State media responded with fervent praise of the Party and of Xi, displayed on their front pages and online homepages.

Xi's words heralded a grander political agenda, which became clear just days later when Wang Qishan, Politburo Standing Committee member and head of the CCDI, convened a conference preparing for the launch of China’s first round of anti-corruption investigations in 2016.  The Party’s Ministry of Propaganda and the related State Administration for Press, Publication, Radio, Film and Television — responsible for carrying out censorship directives — were identified as the first targets in the CCDI’s largest investigation to date. It is clear: Xi is using the menacing anti-corruption campaign to crack down on the Chinese media and better control the dissemination of information. 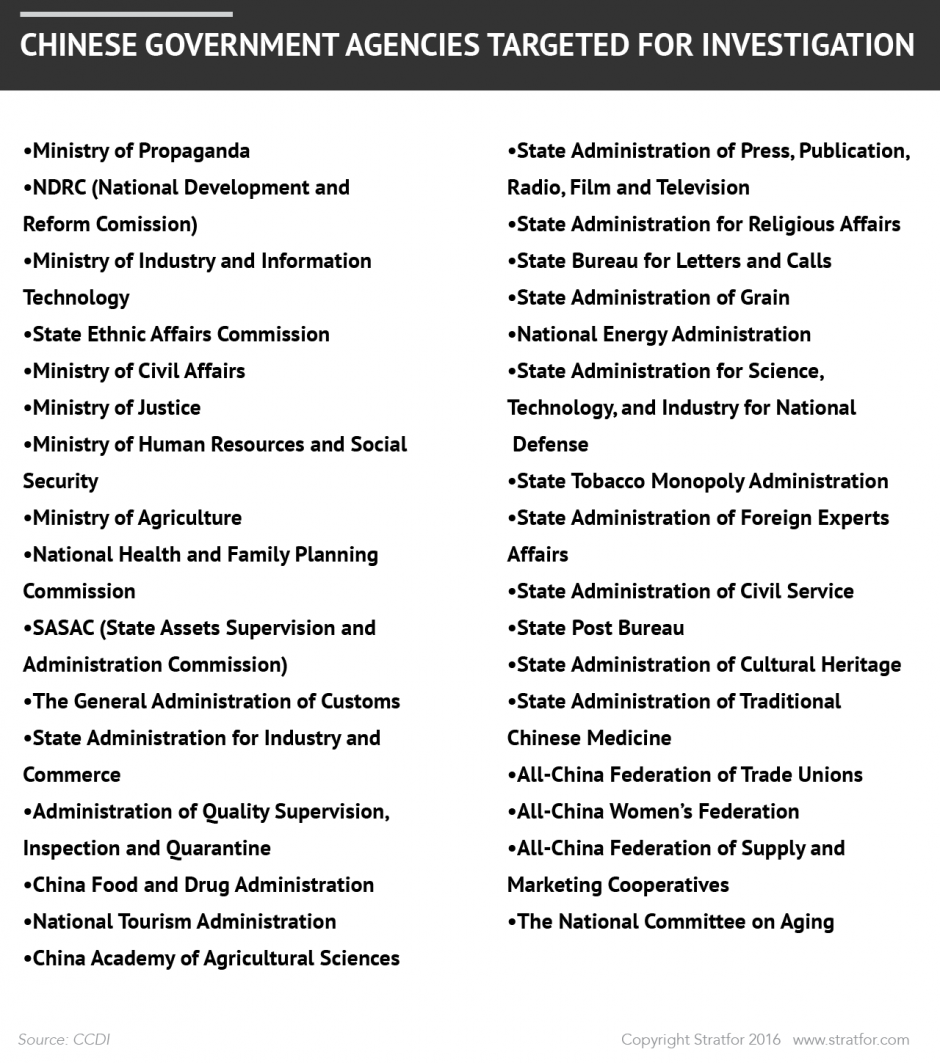 But, as central as the media is to this year's anti-corruption push, it is not the only focus. The CCDI announced 36 targets in total — four provincial governments and 32 central government organizations, including industry-related ministries such as the National Development and Reform Commission, the economic planning body; the State Assets Supervision and Administration Commission, the body overseeing all of China’s state-owned enterprises; and the State Administration of Industry and Commerce, among others. The high number of targets that have a role in formulating and executing industrial policy suggests that this round of investigation is also intended to support China's priority economic goals for 2016, such as reducing industrial overcapacity and merging key state industries. Of course the two focuses are related: China is trying to push forward significant economic reforms. To do that it is clearing possible opposition from within state agencies and securing control of the media to manage the narrative and maintain public support.

Recent events suggest that, contrary to original reports that the CCDI would not expand in size, the agency is in fact adding personnel. At the end of 2015, the CCDI included 15 teams, which were capable of conducting a total of 30 investigations within a single inspection round. However, the expansion of target sets suggests that this year the CCDI will expand to at least 20 teams (16 to investigate government ministries; four to investigate provinces) — double the number when Xi began the anti-corruption campaign in 2013. Assuming three rounds of investigation in a year, the CCDI could conduct anywhere from 108 to 116 inspections this year, depending on whether it chooses to continue provincial inspection tours. 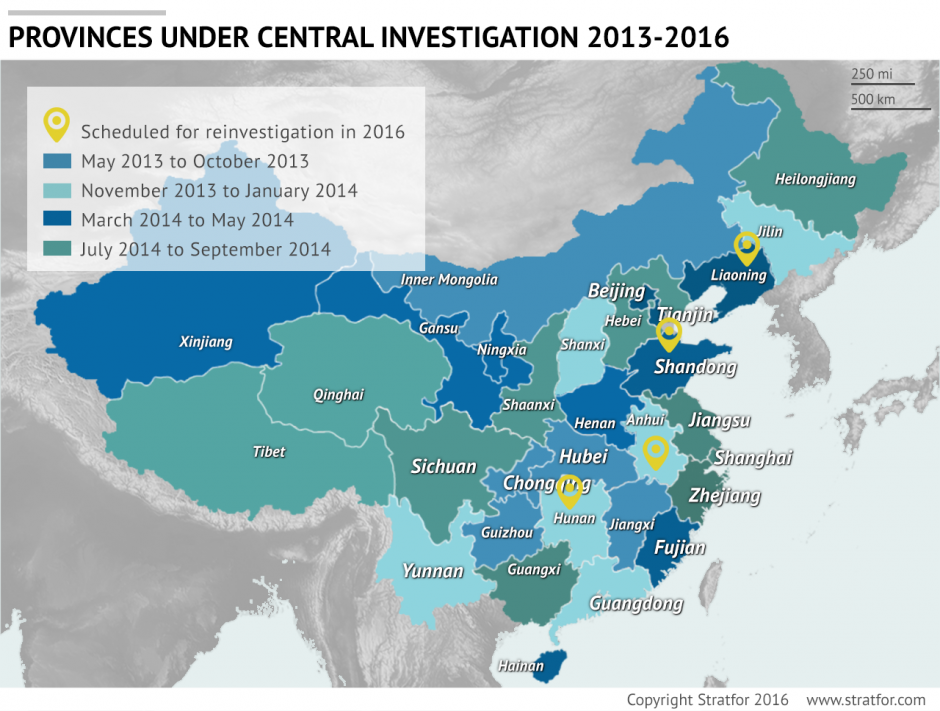 A final point of interest is the government's curious choice to reinvestigate the four provinces of Liaoning, Anhui, Shandong and Hunan, which were all among the earliest targets of the anti-corruption drive. This contradicts previous announcements from the CCDI in December that the agency would devote its large but finite resources toward just one inspection for every organization accountable to the central government (including provinces, which are structurally equivalent to ministries). Historically, investigating a province has taken a single team about three months, a period in which it could theoretically inspect up to three government ministries or state enterprises, so the reinvestigation comes at considerable opportunity costs. Certain political or economic objectives may have given the CCDI cause to take a second look at these regions. Whatever the reason, it is clear that rather than winding down, China's anti-corruption push is accelerating, and in the service of a broader political agenda.