The Israeli air force continues to bombard targets within the Gaza Strip, but thus far ground forces have not yet begun an incursion into the territory. Whether the current air campaign escalates to a ground assault will largely depend on the mission that the Israeli military is trying to accomplish.

Israel Defense Forces' official statements have emphasized that the goal is the severe degradation of Gaza militants' ability to launch rocket strikes, particularly the new Fajr-5 rockets that are purportedly capable of striking Tel Aviv. Halting rocket attacks was also the mission during Operation Cast Lead, Israel's most recent large-scale military operation involving Gaza, which took place in late 2008 and early 2009 and consisted of an air campaign similar to the current one followed by a ground invasion. Examining how Operation Cast Lead developed could provide useful context for how an Israeli ground invasion of Gaza could unfold.

Operation Cast Lead can be separated into two distinct phases: air and ground. The air phase lasted for about one week and targeted suspected rocket smuggling routes, storage locations and firing positions, as well as targets of opportunity that emerged as hostilities progressed. This is very similar to what the IDF is doing currently, primarily with air assets but also assisted by naval and land assets capable of attacking from a distance.

The second phase was the ground attack. This phase consisted primarily of two distinct geographic theaters within Gaza. In the southern theater, Israeli units moved in and set up blocking positions near Rafah and Highway 4 in order to cut Hamas' logistical supply lines running north toward Gaza City. Air and naval strikes were also used to enforce the border between Gaza and Egypt, where a strategically significant road known as the Philadelphi route is located. In the north, Israeli forces penetrated into the Gaza Strip to the north, northeast and slightly southeast of Gaza City itself. This served to isolate Gaza City and clear out initial rocket firing positions as well as defensive positions located in the immediate rural regions. After this initial move, follow-on forces were brought in to thoroughly search and clear identified enemy rocket launching sites, logistical hubs and command and control structures. Notably, Israeli forces did not venture deep into major population centers such as Gaza City and Rafah City to avoid the potentially higher casualties and more serious infrastructural damage associated with urban combat. 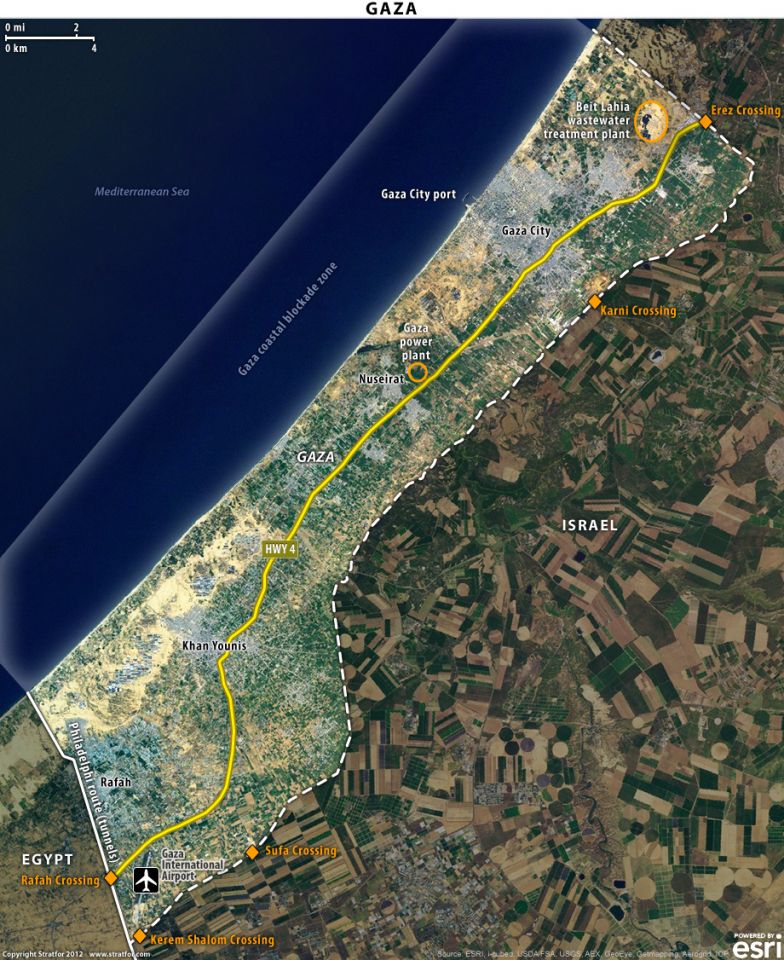 A ground operation now would likely look very similar to Cast Lead in design and tactics, since Cast Lead was considered an operational success and its mission was similar to the current one. However, there are two notable differences. First, in the southern theater during Cast Lead, Egyptian security forces worked to secure the Rafah crossing from their end and allowed Israeli forces to engage the Philadelphi route. Egypt now has a very different government, which brings into question its willingness to support a ground operation. Cairo has already announced that the Rafah Crossing will remain open. This creates an even more serious imperative for Israeli units to cut the supply lines in the south of the Gaza Strip to Gaza City. Israeli ground forces may need to physically occupy the Egypt-Gaza border because naval strikes and airstrikes may not accomplish the mission. This would be a slight expansion on the action taken in 2008-2009 and could bring Israeli forces into uncomfortably close contact with Egyptian forces.

Second, in the north, the potential range of the Fajr-5 missile expands the potential firing zone that needs to be cleared. As stated earlier, Cast Lead focused on Gaza City and its surrounding areas in clearing operations. In order to degrade militants' abilities to reach Tel Aviv with the Fajr-5's expanded range, the IDF will need to clear all potential firing areas to just south of Nusayrat. In theory, this would require the isolation of a larger area and the potential use of more forces or require more time to accomplish.

Tactically, IDF troops entered the Gaza Strip during Cast Lead by operating at night and creating their own crossing points as opposed to using previously established points. They also relied heavily upon combat engineers, armored construction equipment including unmanned D9 bulldozers, and dog teams to establish their own avenues of approach instead of using common routes through Gaza. Ground units also worked in heavy conjunction with air assets for reconnaissance and close air support, and had access to comprehensive artillery support. This allowed them to avoid improvised explosive devices, heavily mined primary access routes, ambushes and counterattacks militants had planned near the assumed IDF approaches.

In a likely ground incursion, we can expect IDF to use similar tactics that have been refined even further over the past four years, but we must assume that militants in Gaza will not make the same mistakes twice and will use different tactics in order to inflict more damage on ground forces. Already in this round of fighting, unconfirmed reports have emerged saying that militants are using MANPADS. If these rumors are true, it could force a more limited role for rotary-wing air support as well as anti-tank guided missiles and thus seriously hamper the firepower, cover and protection provided by armor.

Many of the conditions, geographic settings and stated goals of the current mission are similar to Operation Cast Lead, so one can assume that the potential upcoming ground phase would be similar as well. That being said, some differences have emerged that would likely force an expanded role for ground forces, and the mission stays the same only until the first exchanges of fire happen, as militants and other political actors would also be able to influence how events unfold. With the evolution of the battle, a ground operation is becoming increasingly likely and with the transition to the ground phase of operations casualties, tensions, and political ramifications will only intensify.