The EU-Turkey Immigration Deal Will Not Go Unchallenged

During a bilateral summit held Nov. 29, the European Union and Turkey agreed on several measures to reduce the number of asylum seekers arriving in Europe. Though the deal represents the first comprehensive plan to address the migration crisis in Europe, it is constrained by the conflicting political interests of the negotiating governments.

According to the agreement, the European Union will provide Turkey with 3 billion euros (roughly $3.2 billion) to help Ankara deal with refugees in its territory. However, the money will be disbursed in tranches, which depend on Turkey's commitment to and success at improving border controls, fighting human trafficking organizations and offering working rights to refugees in the country. Like the bloc's approach to bailouts for countries in the eurozone, the mechanism will probably create a cycle of assessments and negotiations over whether or not Turkey is holding up its end of the bargain, giving European leaders plenty of chances to stall on important decisions. The European Union also has to decide where the money will come from. The EU Commission has suggested it will contribute some 500 million euros, and Germany and France can be expected to contribute. But it will be up to the member states to come up with the rest and to decide who will provide what — another likely point of contention. 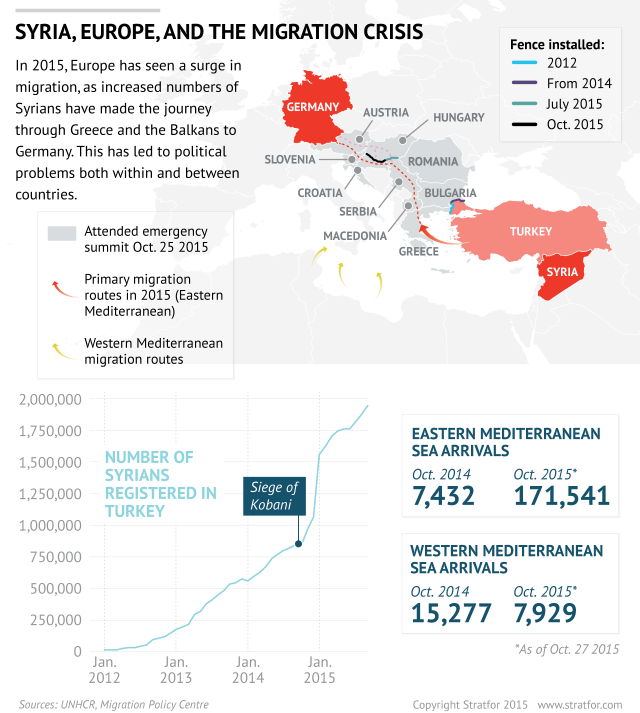 The agreement also comes with potential political benefits. European leaders have promised to hold bilateral summits with Turkey twice a year and, perhaps more important, restart Turkey's EU accession process by opening negotiations over monetary policy. It is one of the few accession chapters to which the island of Cyprus has not presented a veto. The Cypriot government has long opposed Turkish accession without substantial progress in the negotiations over reunifying the island, which is divided between a Greek Cypriot republic in the south and a Turkish Cypriot government in the north. Brussels simply found a creative way around the obstruction.

Finally, the European Union offered to "accelerate" the process to lift visa restrictions for Turkish citizens visiting the Schengen area. Like the disbursement of the money, this will also be linked to Turkey's progress on implementing border measures and constant assessments. Brussels is now expected to present a report in March, followed by a second report later in the year, with the goal of completely lifting visa requirements by October 2016. It is still unclear whether the EU members that are reluctant to give 75 million Turks visa-free access to Europe will change their minds in the next 10 months, especially as European countries continue to restrict rather than facilitate the movement of people.

While EU leaders conceded as much as they could to Turkey, the agreement will not put an end to the bloc's political disputes. Domestic political considerations are driving the German government to do more to reduce the arrival of asylum seekers. Conservative forces are demanding that Chancellor Angela Merkel impose a quota of migrants entering Germany. Merkel, conversely, is calling for an EU-wide quota linked to a voluntary distribution of asylum seekers across the Continent. Similar plans to redistribute asylum seekers currently residing in Greece and Italy have so far failed, and after the terrorist attacks in Paris several EU members said they would no longer accept the share of immigrants that they had previously agreed to.

Meanwhile, nationalist parties — in Germany but also across Europe — continue to benefit from popular discontent over the migration crisis. According to a poll for German paper Bild am Sonntag, roughly half of Germans want Merkel to resign, while popularity for the anti-immigration Alternative for Germany party is at roughly 10 percent, a record high. In France, opinion polls show that the nationalist National Front party could win the election, the first round of which will take place Dec. 6, in as many as three of France's 13 regions. That level of success would be a milestone for the party, which is currently popular but only controls a handful of small municipalities in France.

Ultimately, even if Turkey and Europe meet all the requirements of the agreement, and if the European Union finally succeeds in implementing some redistribution mechanism for asylum seekers, it will not solve the crisis completely. While improved border controls in Europe and Turkey and more coordination in the fight against human trafficking organizations could somewhat reduce the movement of people between the Middle East and Europe, the conflict in Syria will linger, driving Syrians from their homes in search of safer locales. The conflict will continue to shape political developments in Europe and to challenge the continuity of the European Union as it exists today.