French nationals attend a vigil in Taipei on Jan. 9, mourning the victims of the shooting at the Paris office of the satirical newspaper Charlie Hebdo that took place Jan. 7.

In his latest novel, French writer Michel Houellebecq presents a controversial situation: The year is 2022, and France has become an Islamicized country where universities have to teach the Koran, women have to wear the veil and polygamy is legal. The book, which created a stir in France, went on sale Jan. 7. That day, a group of terrorists killed 12 people at the headquarters of French satirical magazine Charlie Hebdo.

Also on Jan. 7, German Chancellor Angela Merkel met British Prime Minister David Cameron in London. Although the formal reason for the meeting was to discuss the upcoming G-7 summit, the two leaders also discussed Cameron's proposals to limit migration in Europe. Finally, a much less publicized event took place in Germany that day: A group of politicians from the Euroskeptic Alternative for Germany party met with members of Pegida, the anti-Islam protest group that has staged large protests in Dresden and minor protests in other German cities.

The date of these four episodes is only a coincidence, but the issues involved are not. A growing number of Europeans believe that people from other cultures are threatening their national identities and livelihoods. The emergence of Germany's Pegida movement, which opposes the "Islamization" of Germany, the terrorist attack in Paris and the recent attacks against mosques in Sweden put the focus on Muslims. But the Europeans' fear and mistrust of "foreigners" is a much broader phenomenon that goes beyond the issue of Islam-related violence. What is actually happening is that Europe is rediscovering nationalism.

The Limits of European Integration

Europe traditionally has been a cradle for nationalism. From the romantic nationalism of the 19th century to the totalitarianism of the 20th century, Europeans have long defined themselves by a strong sentiment of national belonging, often linked to language, ethnicity and religion, and distrust of foreigners. The love for the place you were born, the trust of the people who surround you, and the fear of what strangers could do to you and your community is a basic human feeling. But in Europe, nationalism is particularly notable for the sheer scale of death and destruction it historically has brought to the Continent.

Conscious of the dangers of nationalism, after World War II Europeans sought to weaken the nation-state and progressively replace it with the European Union, a grouping of supranational institutions that, over time, were meant to create a supranational European identity. The idea worked for some time, especially at the economic level, where institutions quickly achieved integration. But over the past few years, several changes in Europe have exposed the limits of the project.

The first is the economic crisis. To a large extent, prosperity was the glue holding the European Union together. During good times, when most people have a job and children are convinced that they will have a better life than their parents, the idea of giving up national sovereignty to supranational institutions is easier to accept. But prosperity is no longer a certainty, and many in Europe are beginning to have second thoughts about the benefits of the European project. The economic decline is also leading to a crisis of representation; a growing number of citizens no longer feel represented by mainstream political parties, unions and other traditional institutions.

The second element is immigration. The economic crisis is affecting the Continent unevenly; countries in northern Europe generally are faring better than those in the south. In addition, the European Union's enlargement in the mid 2000s opened the door for immigration from countries in the former Communist bloc. As a result, countries such as Germany, the United Kingdom and the Netherlands are dealing with immigration from southern and eastern EU countries.

Moreover, Europe's economic crisis coincides with a deepening of the chronic instability in the Middle East and the Levant. This instability has led to a refugee crisis in Europe as hundreds of thousands of asylum seekers arrive in Europe every year, most of whom are Muslims.

In times of economic hardship, people tend to look for simple answers to complex problems, and "foreigners" are usually the easiest target. It is not a coincidence that the Pegida protests emerged in Saxony — one of the German states with the lowest rates of immigration but with some of the highest rates of unemployment. Ethnically and linguistically cohesive areas tend to be less tolerant of people with a different cultural background.

The third issue is integration. Most European governments operate under the idea that immigration could help the European Union mitigate the effects of their shrinking, aging populations. But many countries struggle to fully integrate the newly arrived. Encountering obstacles such as rigid citizenship laws and pervasive cultural barriers, many foreigners find it hard to feel at home in their new countries of residence. In some cases, this situation continues for generations.

Youth unemployment, lack of opportunities and social discrimination were some of the triggers of the French riots of 2005. A decade later, nothing much has changed in France in terms of integration, while the economic crisis has compounded some of the country's structural problems, and Islamist groups such as the Islamic State are successfully using social networks to attract Western European youth. 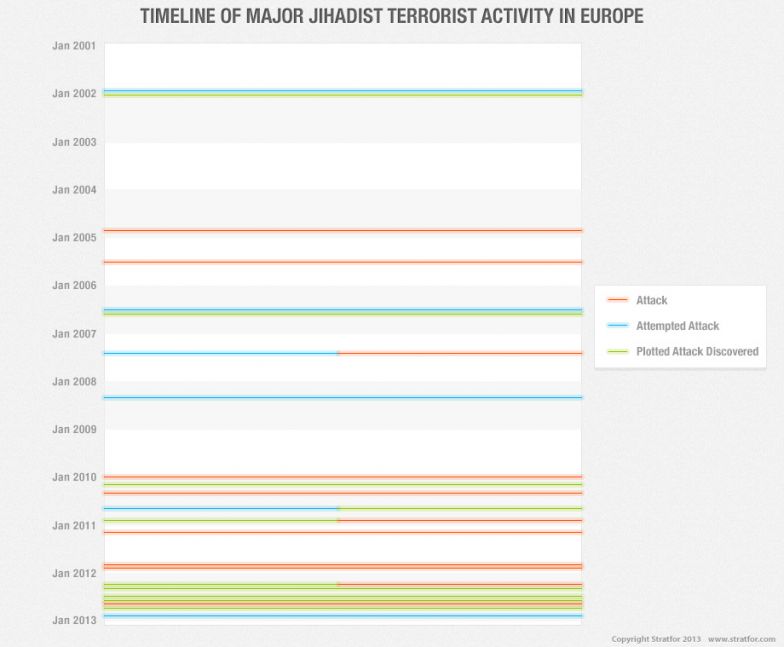 European nationals returning home after receiving training in the Middle East perpetrated many of the recent terrorist attacks in Europe. Since the outbreak of civil war in Syria, more than 550 Islamists reportedly have left Germany to travel to the region. Slightly more than half of them held German citizenship. French media recently reported that some 400 French nationals are fighting in Syria. There is a vicious cycle of young men and women who feel disenfranchised and discriminated against turning to violence — which only fuels anti-immigration and anti-Islam rhetoric.

Western European governments are under considerable stress. They have to deal with immigration from less-developed EU nations while trying to assimilate the asylum seekers that arrive from the Mediterranean. Simultaneously, they face the emergence of anti-immigration parties (from the National Front in France to the U.K. Independence Party in the United Kingdom) and recurring terrorist attacks by nationals who received training in the Middle East. Many Western European countries have to deal with these problems alongside stagnating economies and pervasively high unemployment. The combination of economic malaise and resistance to immigration is seriously challenging the cohesion of the European Union. 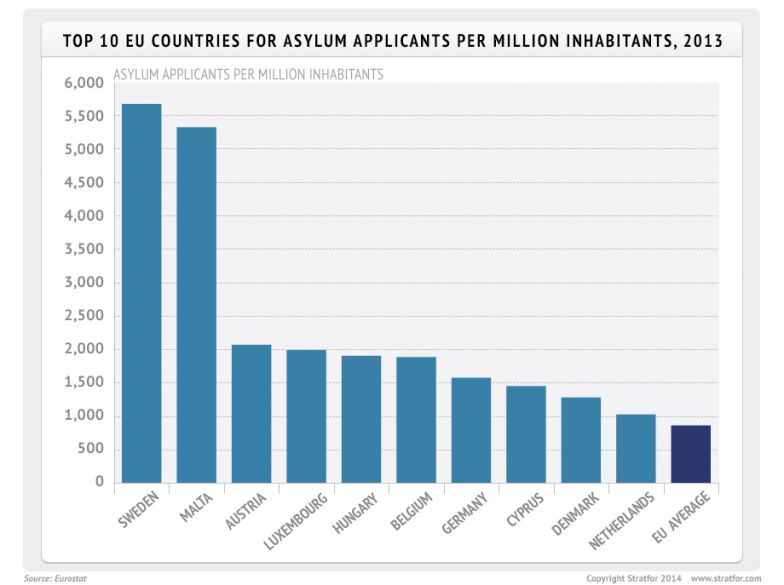 National and regional governments are questioning the Schengen agreement, which eliminates border controls among most EU member states. In recent months, a debate erupted when the government of the German state of Bavaria accused the Italian government of allowing asylum seekers (who, according to EU norms, should have remained in Italy) to leave the country and request asylum somewhere else in the bloc. Rome demanded more solidarity among EU members in the reception of refugees. From Bavaria's point of view, the Schengen agreement should be suspended. From Italy's point of view, the European Union cannot force its coastal nations to bear the sole responsibility of housing the asylum seekers.

The Schengen pact also faces criticism from groups arguing that insufficient internal border controls makes it easier for terrorists to move within the European Union after they enter the bloc. Moreover, some countries have been accused of applying weaker border controls than others. In recent months EU members have discussed ways to improve information sharing across the Continent, but regardless of better cooperation in this area, it is impossible to follow every single potential threat.

Even outside the Schengen agreement, the principle of the free movement of people — one of the founding pillars of the European Union — is under question. Partly because of pressure from the U.K. Independence Party and partly because of its own ideology, the British government flirted with the idea of introducing "emergency brakes" on EU immigration. Germany quickly dismissed the idea, and London eventually abandoned it. But the fact that a moderate government in a core EU country is making these proposals reflects the extent to which the debate over migration in the European Union is no longer at the ideological fringes of the political spectrum.

After decades of post-war supranationalism, the Europeans are once again discussing their national identities. The French tried to start a discussion in 2009, when then-President Nicolas Sarkozy launched a public debate on "what it means to be French" — an exercise that degenerated quickly into a discussion of the role of Muslims in the country. The Pegida protests led to similar debates in Germany, a country that for historical reasons feels extremely uncomfortable with the topic but also considers generational change to be breaking old taboos. Pegida-inspired demonstrations will take place in Austria in February, potentially leading to controversy there as well. These debates will not go away in Europe and will force the Europeans to deal with difficult questions that have remained dormant for decades.

At the core of these problems is growing resistance to globalization, understood as the free movement of goods, services and, most important, people. From the Italian shoemaker who cannot compete with cheap Chinese imports to the British factory worker who believes that Polish immigrants are threatening his job, many Europeans believe globalization is a menace to their way of life. The fact that the European Union was built on many of the principles of globalization explains why the bloc is becoming increasingly fragmented and why the promise of a "United States of Europe" probably will never be achieved.