Migrants board a train to Munich at Vienna's Westbahnhof railway station in the early hours of Sept. 1.

When France, West Germany, Belgium, the Netherlands and Luxembourg signed the Schengen Agreement in 1985, they envisioned a system in which people and goods could move from one country to another without barriers. This vision was largely realized: Since its implementation in 1995, the Schengen Agreement eliminated border controls between its signatories and created a common visa policy for 26 countries.

The treaty was a key step in the creation of a federal Europe. By eliminating border controls, member states gave up a basic element of national sovereignty. The agreement also required a significant degree of trust among its signatories, because it put the responsibility for checking foreigners' identities and baggage on the country of first entry into the Schengen area. Once people have entered a Schengen country, they can move freely across most of Europe without facing any additional controls.

The Schengen Agreement was implemented in the 1990s, when the end of the Cold War and the prospect of permanent economic prosperity led EU members to give up national sovereignty in many sensitive areas. The creation of the eurozone is probably the most representative agreement of the period. But several things have changed in Europe since then, and member states are beginning to question many of the decisions that were made during the preceding years of optimism.

The most important change of the past six years is probably Europe's economic crisis and its byproduct, the rise of nationalist political parties. Not far behind, though, is the substantial increase in the number of asylum seekers in Europe, which is putting countries on the European Union's external borders (such as Greece and Italy) and countries in the Continent's economic core (such as France and Germany) under significant stress. This is not the first time the Schengen Agreement has been questioned, but the combination of a rising number of asylum seekers, stronger nationalist parties and fragile economic recovery are leading governments and political groups across Europe to request the redesign, and in some cases the abolishment, of the Schengen Agreement. 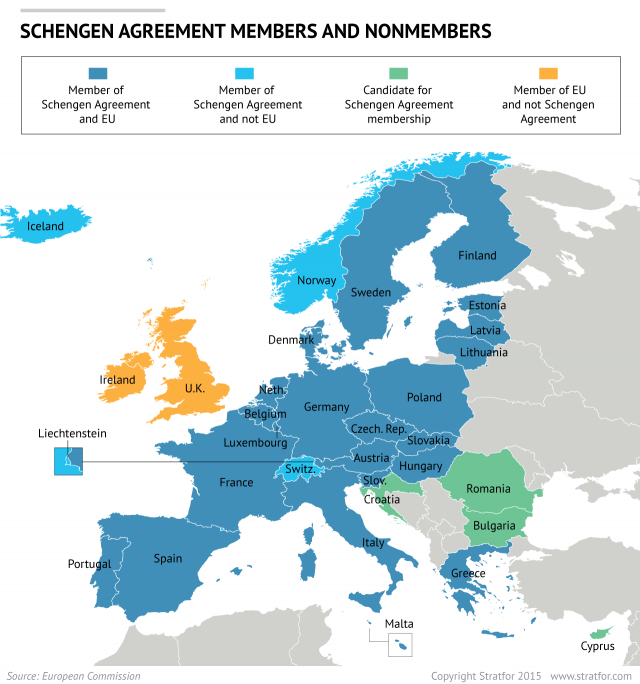 On the one hand, countries in northern Europe criticize countries on the Mediterranean for their lack of effective border controls and for their failure to fingerprint many of the asylum seekers that reach EU shores. This means that the migrants can move elsewhere in the Continent to apply for asylum. In recent months, French and Austrian authorities accused Rome of allowing (and even encouraging) asylum seekers to leave Italy and threatened to close their borders with Italy; indeed, France followed through with its threat and briefly closed its border in late June.

On the other hand, countries in southern Europe criticize their northern peers for their lack of solidarity. Italy and Greece have repeatedly demanded more resources to patrol the Mediterranean and rescue immigrants, more funds to shelter asylum seekers and the introduction of immigration quotas in the European Union. Central and Eastern European countries, which think asylum seekers should be distributed on a voluntary basis, rejected the idea of quotas.

The migration crisis has also led to greater friction between Schengen members and their non-Schengen neighbors. The recent dispute between France and the United Kingdom (which is not a member of the Schengen zone) over immigrants trying to cross the English Channel at the French port of Calais was perhaps the most visible example of the growing tension, but the situation also led Hungary to build a fence at its border with Serbia and issue threats to militarize the border.

The European Union is dealing with two overlapping problems. The first is its struggle to come up with a new immigration policy. Between September and December, EU members will hold a number of meetings and summits to reform the bloc's immigration rules. Germany, a country that only a few months ago was reluctant to change the Dublin regulations (according to which asylum requests should be processed in the country of a migrant's first entry) is now leading the push for a change. Germany expects to receive some 800,000 asylum seekers this year; meanwhile, attacks against immigrant shelters in Germany are spiking. 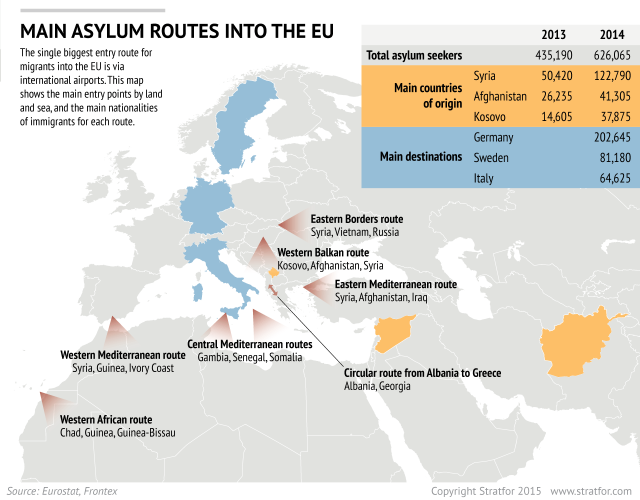 Berlin's proposals include the creation of a common list of countries considered safe, which means their nationals, in principle, should not be allowed to request asylum in the European Union. This list would largely include countries in the Western Balkans, such as Albania and Macedonia, which are not experiencing a civil war or any particularly serious humanitarian crisis that would justify a request for asylum. Germany's second proposal is the allocation of more funds and staff to centers in Greece and Italy to identify immigrants and process their applications. Finally, Berlin will also push for a proportional distribution of migrants across the European Union.

Each of these points is highly contentious. Asylum requests are a case-by-case issue, and it often takes a long time for authorities to determine who is truly seeking asylum and who is an economic migrant. Deportation will also remain problematic, since most countries in Mediterranean Europe lack the financial and human resources to expel illegal immigrants. In addition, Mediterranean countries are unlikely to simply accept the construction of larger immigration centers within their territory without a clear system to redistribute immigrants across the Continent. Several Central and Eastern European nations opposed a recent plan by the European Commission to introduce mandatory quotas of immigrants, and that opposition is not likely to end.

Although authorities do not have the resources to place every single potential terrorist under surveillance, the lack of border controls eliminates a layer of potential threat detection.

The European Union's second problem is what exactly to do with the Schengen Agreement. The treaty makes it possible for illegal immigrants to move freely among member states and raises some security questions. Several member states have expressed concern that some of the thousands of migrants arriving in Europe could be terrorists. Recent episodes, such as the attempted attack on a French train in which the attacker obtained weapons in Belgium before trying to kill people on a train going from the Netherlands to France, illustrates the problems linked to the lack of border controls. Although authorities do not have the resources to place every single potential terrorist under surveillance, the lack of border controls eliminates a layer of potential threat detection.

The rise of nationalist parties is also a threat to the Schengen Agreement. In Finland, a nationalist party is already a member of the government coalition, and Euroskeptic and anti-immigration parties are influential in countries such as Denmark, Sweden and Hungary. In France, most opinion polls show that the Euroskeptic National Front will make it to the second round of the presidential election in 2017. All of these parties believe that national immigration laws should be toughened and the Schengen Agreement should be revised, if not abolished.

The Future of Schengen

The European Union probably will not abandon the Schengen Agreement anytime soon. Despite the criticisms, the treaty has reduced the time and cost of moving goods across Europe because trucks no longer have to wait for hours to cross an international border. It also benefits tourists and people living in border towns, because passports and visas are no longer needed. Finally, the agreement allows countries to save money, because governments no longer need to patrol their land borders.

The Schengen Agreement will probably be reformed before the end of the decade to make it easier for countries to reintroduce border controls. The first step in this direction happened in 2013, when signatory members agreed that border controls could be temporarily reintroduced under extraordinary circumstances (such as a serious threat to national security). But the reform is limited in its scope (border controls can be reintroduced for a maximum of 10 days, and only after consultation with the European Commission) and it explicitly says that a spike in immigration should not, in itself, be considered a threat to internal security.

In the coming years, member states will push to be given more power and discretion when it comes to reintroducing border controls. EU countries in northern Europe will also push for the suspension or even the expulsion of countries along the European Union's external borders that are seen as failing to effectively control their borders. New EU member states will have a hard time entering the Schengen zone, and the resistance from some countries to accept nations like Romania and Bulgaria (which have been in the European Union for almost a decade but are still waiting to join the Schengen area) will become the new normal.

Even without a proper reform of the Schengen Agreement, member states will continue to enhance police controls at train and bus stations and at airports. Several countries already employ sporadic police controls on trains and buses, a practice that is likely to grow. Under pressure from conservative forces, many EU countries (mostly in northern Europe) will also toughen their migration laws to make it harder for immigrants to access welfare benefits.