Europe: What to Expect After Germany's Elections

The Reichstag building in Berlin on Sept. 17.

Much of Europe is eagerly anticipating the results of Germany's Sept. 22 parliamentary elections, but this anticipation may be somewhat misplaced. Of course, Germany's importance to Europe is well founded. It is Europe's largest economy and its main bailout creditor to struggling eurozone countries, so Germany's economic health is vital to the economic health of Europe as a whole. But the relationship goes both ways: Germany's economy relies on the free trade zone and on exports, which the rest of Europe can buy only if it can afford to do so. Thus any government in Berlin will continue to aid countries afflicted by the European crisis — even at the risk of growing domestic opposition.

Germany's economic performance is tied strongly to external developments because of the country's reliance on exports. According to Eurostat, exports were equivalent to nearly 52 percent of Germany's gross domestic product in 2012. Europe is Germany's largest customer, so the German economy depends on the strength of the European consumer base. Germany's political and economic stability largely depends on its access to foreign markets, hence its unwavering support for the eurozone and the free trade agreement within Europe. 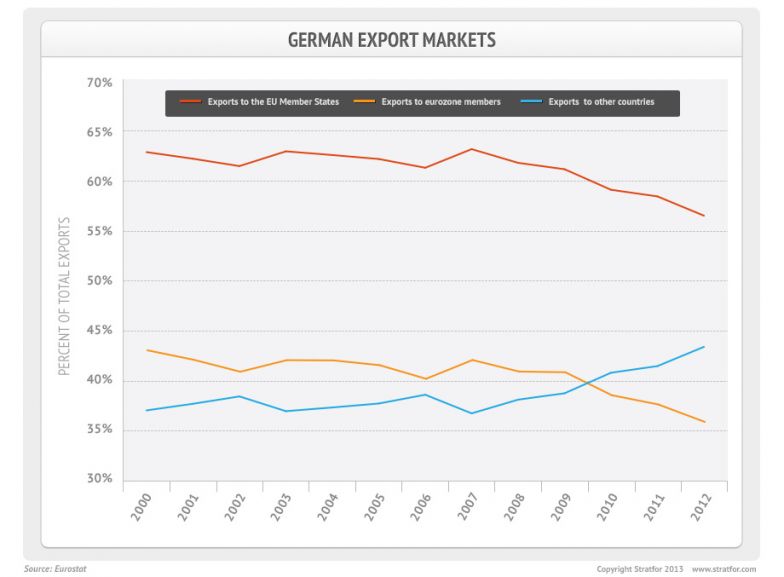 So far, German exports have mostly survived the tumult of the European crisis. This is partly because German businesses diversified their export markets relatively successfully. Since 2007, exports to the European Union and the eurozone have declined in favor of other countries, particularly Asian countries and the United States. In fact, the United States is the second-largest destination market for German exported goods. In 2012, nearly 30 percent of all the European Union's exported goods to the United States came from Germany. Roughly 16 percent of German goods exports went to Asia, with China being Germany's fourth-largest export market.

However, Germany's economy has not escaped the crisis unscathed. Over the past few years, German economic growth has slowed. According to the International Monetary Fund, Germany's GDP grew by only 0.9 percent in 2012, down from 4 percent in 2010. In 2013, the International Monetary Fund expects the GDP to grow by only 0.3 percent. Unemployment will likely follow these contractions, and German voters will pressure Berlin to increase government spending — something German officials have urged other countries to avoid.

This goes to the heart of Germany's dilemma. Strengthening domestic demand — by raising wages, for example — would limit its exposure to external risks, but it would also make German exports less competitive. German demand is relatively strong despite the European crisis. Relatively cheap borrowing costs have facilitated domestic consumption, as has a low unemployment rate, which stood at 5.3 percent in July 2013, according to Eurostat. This is the lowest unemployment rate since the European Union's statistical office started recording data in 1991. 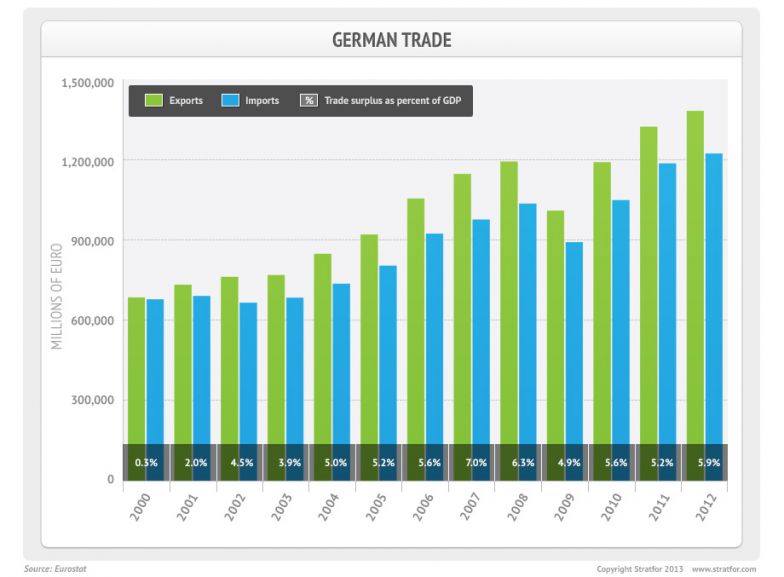 Germany's stable domestic demand has helped Central and Eastern European countries in particular avoid deeper economic contractions, but Berlin is under pressure to strengthen demand even further. We expect Germany to debate how it can do so after the parliamentary elections.

One option under consideration is the introduction of a minimum wage. Germany's labor costs have risen modestly over the past few economic quarters. Averaging 30 euros an hour (about $40) in 2012, they were only slightly higher than the eurozone average. The industrial sector will nonetheless oppose this measure, citing fears of losing competitiveness.

Berlin will also address its immigration issue. With an aging and declining population, Germany is searching for ways to attract foreigners who can bolster its labor force. Germany has actually seen an uptick of immigrants over the past few years due to its resilience to the crisis, but historically it has trouble retaining them. Any new government will have to introduce policies to retain immigrants while allaying fears that foreigners will abuse the national social security system.

A third priority for the new German government will be re-evaluating the country's energy strategy. Energy costs for households and companies have risen over the past few years because of the country's transition toward renewable energy. The transition has proved more expensive than expected, giving way to concerns of lost competitiveness. Considering the resources that have been committed and developments already underway, Germany cannot simply abandon the current strategy, but its targets likely will be revised and alternative options such as shale gas will be considered.

Because Germany has few domestic energy resources, the country's energy strategy is also part of its foreign policy. Infrastructure integration with other countries is important for German energy imports, as are bilateral relations with Russia, Germany's main oil and natural gas provider. Ensuring unfettered access to Russian natural gas and oil will remain a foreign policy priority, though relations with Moscow will sometimes conflict with Germany's goal of integrating Europe.

The Insignificance of Partisan Politics

How effectively Germany integrates Europe will depend largely on its willingness to aid other European countries, particularly those in the eurozone. Major German political parties probably accept the notion that Germany will have to provide further aid to struggling countries. Continued financial assistance is a crucial element in Germany's national strategy of ensuring cohesion in Europe and preserving the currency union.

Thus Germany is almost certain to continue providing funds. Berlin already has contributed considerable amounts of money to the rescue effort. The government estimates that Germany's direct liability to the European debt crisis so far is around 95 billion euros. In any case, it can afford to risk neither the outbreak of another financial crisis nor the dissolution of the eurozone. German think tank Ifo estimates that if the eurozone were to break up, and if the five countries that have received aid were to go insolvent, Germany would lose some 530 billion euros. The actual cost would likely be much higher considering the economic consequences that such a breakup would have outside the financial sector.

Notably, this does not mean Germany will suddenly change its strategy and finance far-reaching stimulus programs for troubled countries. German aid to struggling countries will still only come as a reaction to pressure from financial markets and political instability in single countries threatening the eurozone's stability.

Future German aid is likely to entail giving more time to countries that have required aid to repay their debt. Further, it could reduce the cost of such repayments and rely on the European Central Bank to intervene in bond markets if necessary.

Legal and institutional hurdles will limit Berlin's ability to be proactive in helping other countries. Even if there were general consensus among the political elite that Germany should provide aid more extensively, small opposition groups can challenge and delay assistance plans relatively easily. The German constitutional court has already had to assess the legality of German contributions to EU aid measures. (So far the court has not ruled that the efforts have violated the constitution.) Within the next year, the court will likely have to determine whether forgiving debt to crisis countries, an option under consideration for Greece, would violate the German constitution.

To ensure survival of the eurozone, Germany will also try to preserve the Franco-German alliance. Historically, European integration meant solidifying German economic strength and French political leadership, but the European crisis has strained their relationship. The pressure Berlin will face in giving in to French demands, which include allowing more government spending, mutualizing debt and changing the European Central Bank's role to accept higher inflation and to more openly intervene in sovereign bond markets, will largely depend on how strongly the economic performance of both countries diverges.

As the crisis persists and further aid measures are implemented, the challenge for Berlin will be to convince not only German voters but also smaller countries in northern Europe of the importance of participating in joint aid efforts to stave off further eurozone disintegration. These countries, which include the Netherlands, Finland and Austria, typically are skeptical of aiding afflicted countries, as is Germany.

Germany is often portrayed as the leader in Europe, the country that can define the European Union's future. There may be some truth in that portrayal, but Berlin's actions actually are guided by the strength of external demand and the need to maintain cohesion of the European Union.