When the London 2012 Paralympic Games conclude the week of Sept. 9, the British navy reportedly will send a task force to the Eastern Mediterranean Sea, where it will participate in amphibious exercises off the coasts of Albania, Sardinia and Turkey before lingering off the coast of Cyprus.

Ostensibly, the upcoming exercises are meant to prepare the navy for evacuating Syria of British citizens. Indeed, the ongoing civil war in Syria has prompted several Western countries to consider evacuation plans for their citizens who remain in the war-torn country. Some countries already have issued travel warnings against Syria, while others have advised their citizens to vacate the country. The United States, the United Kingdom, Canada, France and Germany have closed their embassies in Syria and are less able to assist their citizens there.

Foreign nationals should take full advantage of their governments' evacuation assistance regardless of the country in which they temporarily reside; British citizens in Syria are no exception. However, government planning is no substitute for personal evacuation plans, which are vital for any citizen in a foreign country.

Evacuation plans are essential for all expatriates who live in developing countries, including diplomats, businessmen, aid workers and seasonal residents. Natural disasters, mob violence from civil disturbances, terrorism and war can all precipitate evacuations. Natural disasters, such as the 2010 earthquake in Haiti or the 2004 tsunami in Asia, erupt suddenly, while other events, such as the civil unrest in Syria, develop slowly. The latter instances give foreign citizens ample opportunity to leave; in Syria, foreign governments encouraged their citizens to vacate months ago. But even in such situations, events that require evacuation can occur abruptly, which leaves expatriates little time to plan their exits.

The potential for evacuation is not confined to developing countries. Many foreigners fled Japan following the March 2011 earthquake that damaged a nuclear power plant in Fukushima, and the 2010 wildfires in Moscow prompted a sudden and massive evacuation. No one expected the fires to worsen so quickly.

Since the potential for evacuation is nearly universal, expatriates are best served preparing an evacuation plan before a crisis erupts. Foreign embassies often will assist evacuation efforts — expatriates are encouraged to register with their respective embassies and foreign ministries — but foreign citizens should not rely on their governments to do their planning for them.

The reason for this is twofold. First, it may take some time for a government to execute its evacuation plans. In other instances, governments might not have an embassy to coordinate such efforts. Expatriates should take advantage of any evacuation procedures offered by their government, but they should not rely solely on those plans.

Nor should they rely on the plans of allied governments. Countries like the United States, the United Kingdom and France often will work with their allies in evacuation scenarios. However, every country will focus its efforts on the safety of its respective citizenry. So even in friendly countries, foreign citizens need to be responsible for their own security.

Evacuation situations involve more than merely showing up at the airport or seaport and departing. Usually, evacuations entail a great deal of bureaucracy and delay. It is not uncommon for expatriates to stay at an airport or seaport for a day or longer as they wait for their governments to arrange safe departure with the host government, rebel forces or both. Moreover, evacuation procedures will depend on the crisis. In most cases, commercial airliners, sea crafts or land transport will facilitate evacuations. Despite what is portrayed in the movies, military forces and helicopters are used only in very rare situations.

In any case, expatriates will be expected to pay for their own transportation out of the country. If they do not have the cash up front, they will be required to sign a promissory note to reimburse their government. They also are allowed to carry on only one small bag and are not allowed to bring pets. Therefore, many prefer to arrange their own transportation out of the country.

Personal evacuation plans usually require departure before the situation becomes too critical to leave. Thus, an important element of any evacuation plan is to establish criteria that, if met, will put the plan into action. While it is often prudent to leave a place before the situation deteriorates and your government orders an evacuation, some people wait until the very last minute to leave or decide to shelter in place and ride the crisis out.

Another important element of an evacuation plan is preparing a fly-away kit. This is a small bag or backpack that contains the basic things a person or family will require during an evacuation. Obviously, the most important things you need are your identification papers, money and credit cards (which should be kept in sealable plastic bags to keep them dry) and a cell phone or other means of communication. But a fly-away kit should also contain important items, such as a change of clothes, toiletry items, a jacket or something warm to wear, prescriptions or other required medications, a first aid kit, a smoke hood, a flashlight, drinking water, non-perishable food, duct tape, a multi-tool knife and perhaps even something to read — again, evacuation usually entails a great deal of waiting. The idea of the fly-away kit is to have most of the items assembled in the bag so that one can quickly gather any remaining items, such as medicines, documents and money, before departure.

Maintaining important papers like passports, birth certificates, marriage certificates, immunization records and credit card information in one secure file allows foreign citizens to grab the file quickly prior to departure. Expatriates must make sure that their travel documents are not expired and that they have the appropriate visas if their plan requires traveling to an adjacent country. Keeping copies of important documents in a separate, secure place is also a good idea lest the originals be lost or stolen.

An expatriate's means of departure and evacuation routes should be prearranged, but they should not be inflexible. Evacuation plans should include several routes and alternative modes of transportation. In some cases, transportation hubs — the international airport, for example — may be closed, or an earthquake may have destroyed the bridge on an escape route. Such scenarios require an alternative plan.

If an entire company or a family is vacating a country, every member of the group needs to understand the plan and know what to do in such a situation. If you are working for a multinational corporation you need to clearly understand your company's policies and what they will and will not do to assist you. Many companies purchase commercial medical and emergency evacuation insurance policies for their employees.

Communications are frequently unavailable during a crisis, but knowing that all the members of your family or staff know your evacuation plan — and are abiding by it — will help reduce the stress of not being able to communicate with them. It also allows each individual to focus on his or her immediate tasks. If you wait to implement the plan until you have communicated with every member of your family or staff, it could be too late to make it out. An evacuation plan must also account for ways to communicate with your family overseas and to your government. Alternative means of communication, such as satellite phones, might be helpful.

While almost any contingency plan is better than no plan, a plan that has been tested in the real world, especially during rush hour or another time of heavy congestion or disruption, is better than a plan that only exists on paper. Practicing a plan will help you to identify problems and weaknesses that do not appear in a theoretical plan. Practice also helps ensure that all of those participating in the plan know exactly what they are required to do and where they should go.

Plans must be periodically checked and updated and the contents of fly-away kits inspected. Highway construction projects can render evacuation routes impassable, and flashlights with dead batteries are useless. It is also prudent to designate someone who will remain in the country and can safeguard your home and belongings and care for your pets after you leave.

Creating an evacuation plan is important because when many people are confronted by a dire emergency, they simply do not know what to do. When people are overwhelmed by an emergency, it is often difficult for them to think clearly and establish a logical plan. Having a plan in advance — even an imperfect plan — provides even a person in shock a framework to rely on and a path to follow.

Syria can help illustrate some aspects of evacuation planning. While many Western governments have closed their embassies and advised their citizens to leave the country, there are still many expatriates who remain in Syria. Others have even traveled to Syria, for personal or commercial reasons, since the outbreak of civil unrest. 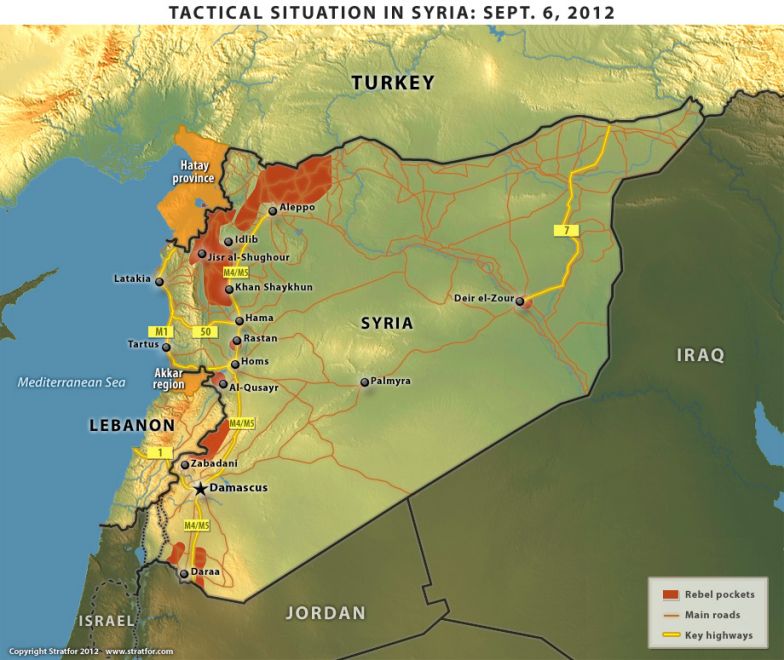 Some airlines, such as Air France, have suspended flights to Damascus, but others, including EgyptAir, Emirates Airlines and Royal Jordanian Airlines, continue flights. This could change. Late in the week of Aug. 26, Syrian rebels accused Russian arms smugglers of bringing weapons into Syria aboard civilian aircraft and threatened to attack such flights. While Stratfor has no information to confirm these rebel claims, Russian arms traffickers do indeed have a documented history of using civilian cargo and passenger planes to move weapons into conflict zones, and it is therefore possible that they are doing so in Syria. If the Syrian rebels begin to shoot at aircraft they suspect of smuggling weapons, airlines may become less willing to fly to Damascus.

The rebels have also intensified their attacks against the airport in Aleppo, which was being used to fly close air support missions and to bring supplies into the city. As a result, passenger flights to the airport have been suspended.

If foreign citizens cannot leave by air, the most secure land route from Damascus is Road 1, which leads directly to Beirut. An alternative route would take citizens south to Jordan via the M5 highway. However, this route traverses dangerous areas that are rife with fighting.

Expatriates in the eastern half of Syria would likely head to the Kurdish areas in the northeast through Road 7 and the M4 motorway, exiting through Turkey. There is a lot of fighting near the Iraqi border, and the road infrastructure in the southeast is not very good.

In the northern rebel-held areas, the best evacuation method is to simply take the most secure road straight to the Turkish border, avoiding regime shelling and airstrikes as much as possible. For foreigners on the coast, the best option is to leave by boat. An alternative route is to take the M1 motorway north to Turkey's Hatay province or south to northern Lebanon. Both of these borders are used heavily for smuggling supplies to the rebels, so one has to be careful of clashes.

One of the worst places to be stuck is in the centrally located Orontes Valley. Roads leading southwest to Lebanon and north to Turkey are largely blocked by the frontlines of the battle. Ideally, one would proceed west to the coast along such routes as Road 50 and hope not to be targeted while passing checkpoints or during ambushes.

Currently, the Syrian government and the rebels appear to be locked in a war of attrition and there are no signs of an imminent regime collapse. However, if the regime collapses suddenly, we can expect to see a flurry of activity as foreigners flee the conflict zones and governments work to evacuate the country.