On July 21, Texas Gov. Rick Perry announced he was deploying 1,000 members of the Texas National Guard to the Mexican border to help strengthen border security. The move is the latest in a chain of events involving the emigration of Central Americans that has become heavily publicized — and politicized. 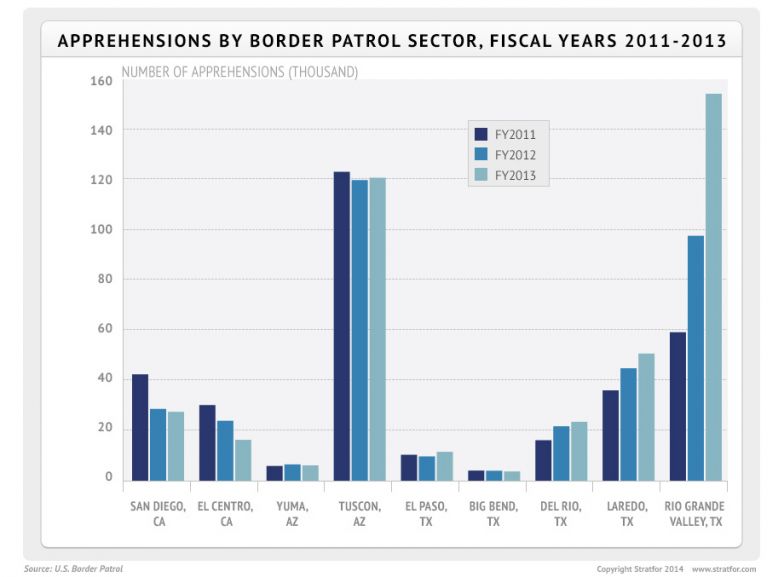 Lost in all the media hype over this "border crisis" is the fact that in 2013 overall immigration was down significantly from historical levels. According to U.S. Border Patrol apprehension statistics, there were only 420,789 apprehensions in 2013 compared to 1,160,395 in 2004. In fact, from fiscal 1976 to 2010, apprehensions never dropped below 500,000. During that same period, the Border Patrol averaged 1,083,495 apprehensions per year compared to just 420,789 last year.

Of course, apprehension statistics are not an accurate count of total immigration and do not account for those who cross without being caught, and the statistics are also slightly skewed by the fact that Unaccompanied Alien Minors are far more likely to surrender to authorities rather than attempt to avoid them. In 2011, the Border Patrol apprehended 4,059 unaccompanied children; by 2013 that number had reached 38,759. Year to date, the Border Patrol has apprehended more than 46,000 unaccompanied children and estimates it will apprehend around 60,000 total in 2014. Still, overall, the Border Patrol will apprehend and process hundreds of thousands fewer people this year than it did each fiscal year from 1976 until 2010. 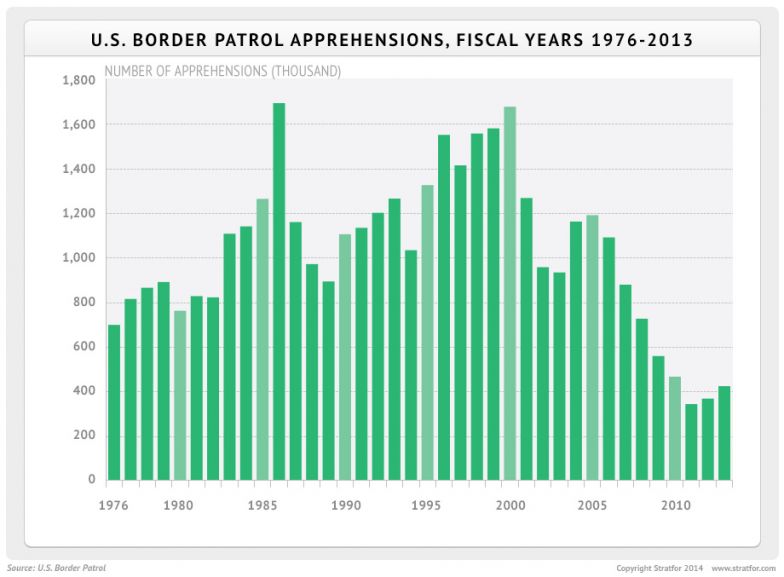 This type of hype and politicization of the U.S.-Mexico border is not new. It is something that has surfaced at irregular intervals for years now, along with scaremongering using the boogeyman of terrorism, and it appears to be happening again.

I've recently done a number of media interviews regarding immigration, and during several of these interviews, reporters have asked me the question: "Does the crisis on the border give terrorists an opportunity to sneak into the country?" While other border security analysts have told reporters that they believe terrorists would take advantage of the border crisis and that the cartels would be willing to work with terrorists for the right price, I disagree. I believe that an analysis of the history of plots directed against the U.S. homeland from overseas and an examination of the changes in the dynamics of transnational terrorism show such claims to be unfounded.

No Link to the U.S.-Mexico Border

As chaos has wracked Mexican towns just south of the U.S. border such as Nuevo Laredo, Reynosa, Juarez and Tijuana, there has been repeated speculation that al Qaeda could partner with some street gang or Mexican cartel to smuggle terrorist operatives or weapons into the United States to conduct a spectacular terrorist attack.

For example, in 2005, rumors were frequently published on a popular web media outlet claiming that al Qaeda had smuggled several tactical nuclear devices into the United States with the help of the Salvadoran Mara Salvatrucha street gang. According to the rumors, al Qaeda was planning to launch a horrific surprise nuclear attack against several U.S. cities in what was termed "American Hiroshima." Clearly this never happened.

But American fearmongers are not the only ones who can cause a panic. In a 2009 speech, radical Kuwaiti university professor Abdullah al-Nafisi talked about the possibility that jihadists could smuggle anthrax in a suitcase through a drug tunnel on the U.S.-Mexico border, a claim that sparked considerable concern because it came on the heels of other hyped-up anthrax threats.

However, an examination of all jihadist plots since the first such attack in the United States — the November 1990 assassination of the radical founder of the Jewish Defense League, Meir Kahane — shows that none had any U.S.-Mexico border link. Indeed, as we've noted elsewhere, there have been more plots against the U.S. homeland that have involved the U.S.-Canada border, including the 1997 plot to bomb the New York Subway and the Millennium Bomb Plot. But by and large, most terrorists, including those behind the 1993 World Trade Center bombing and the 9/11 attacks, have entered the United States by flying directly to the country. There is not one jihadist attack or thwarted plot in which Mexican criminal organizations smuggled the operative into the United States.

There was one bumbling plot by Iran's Islamic Revolutionary Guard Corps in which Manssor Arbabsiar, a U.S. citizen born in Iran and residing in Texas, traveled to Mexico in an attempt to contract a team of Mexican cartel hit men to assassinate the Saudi ambassador to the United States. Instead of Los Zetas, he encountered a U.S. Drug Enforcement Administration informant and was set up for a sting. There is no evidence that an actual Mexican cartel leader would have accepted the money Arbabsiar offered for the assassination.

Mexican criminal leaders have witnessed U.S. government operations against al Qaeda and the pressure that the U.S. government can put on an organization that has been involved in an attack on the U.S. homeland. Mexican organized crime bosses are businessmen, and even if they were morally willing to work with terrorists — a questionable assumption — working with a terrorist group would be bad for business. It is quite doubtful that Mexican crime bosses would risk their multibillion-dollar smuggling empires for a one-time payment from a terrorist group. It is also doubtful that an ideologically driven militant group like a jihadist organization would trust a Mexican criminal organization with its weapons and personnel.

Another factor to consider is the changes in the way militant groups have operated against the United States since 9/11. Because of increased counterterrorism operations and changes in immigration policies intended to help combat terrorist travel, it has become increasingly difficult for terrorist groups to get trained operatives into the United States.

Even jihadist groups such as al Qaeda in the Arabian Peninsula have been forced to undertake remote operations involving bombs placed aboard aircraft overseas rather than placing operatives in the country. This indicates that the group does not have the ability or the network to support such operatives. In addition to remote operations launched from its base in Yemen, al Qaeda in the Arabian Peninsula has also undertaken efforts to radicalize grassroots operatives residing in the United States, equipping them with easy-to-follow instructions for attack through its English-language magazine, Inspire.

This focus on radicalizing and equipping grassroots operatives is also reflected in the fact that the majority of the attacks and failed plots inside the United States since 2001 have involved such grassroots operatives rather than trained terrorists. These operatives are either U.S. citizens, such as Nidal Hasan, Dzhokhar Tsarnaev and Faisal Shahzad, or resident aliens such as Najibullah Zazi. Failed shoe bomber Richard Reid was traveling on a British passport (no U.S. visa required) and the would-be underwear bomber, Umar Farouk Abdulmutallab, had obtained a valid U.S. visa. The operatives had the ability to legally reside in the United States or to enter the country legally without having to sneak across the border from Mexico.

Could a terrorist operative take advantage of the U.S.-Mexico border? Possibly. Is one likely to attempt such a crossing when so much publicity and extra enforcement has been directed to that border? Probably not.