Since the end of the Cold War, the Pacific Rim has seen China rise and Japan stagnate. However, Japan is approaching an epochal shift that will enable it to challenge the current order. This analysis is the first in a four-part a series that forecasts the nature of that shift and the future of Japan.

Japan is waking up. For two decades, the island nation has been relatively removed from both regional and global affairs. Now it is in the earliest stages of a push to re-establish itself as a leading power in the Pacific Rim, a role that will require it to make some significant internal adjustments. Over the past 150 years, Japan's political order has undergone three such overhauls. Each came as a reaction to profound changes in the international system: the entrance of European powers into East Asia, the rise of fascism in Europe and the beginning of the Cold War.

As the Cold War ended, Japan began to stagnate. Previously, Japan had managed to thrive by modeling its internal order to adapt to regional geopolitics. This time, however, no coherent order emerged in the Pacific Rim, so Tokyo maintained its Cold War status quo. Japan's maladapted holdover order quickly entered a 20-year slow-burning crisis that has come to be known as the "Lost Decades." It is this period of crisis that is now coming to an end.

No single force will bring about the end of the Lost Decades. Instead, a number of circumstances will coincide, ushering in a new Japanese order. Over the next 10 years, the status quo will change as Japan adapts to the rise of China and changing U.S. expectations for Pacific allies. Meanwhile, economic and demographic pressures will mount on Tokyo. However, the direct antecedents of Japan's coming break will be the contradictions that lie within its current stagnant order. Understanding this situation is the first step in forecasting the future of Japan.

Despite its strong economic performance in the 1970s and 1980s, Japan foundered in the immediate aftermath of the Cold War. A succession of asset bubbles and financial crises in the 1990s and 2000s further undermined the country's economic growth. But leaders had little incentive to make the necessary reforms to political institutions or foreign policy: Despite the sluggish economy, quality of life for voters was high and external threats were few. For the first time in its modern history, Japan did not know what to do, did not need to do much and therefore did nothing. The political and economic order designed for an earlier era persisted and became Japan's new status quo, gradually fraying at the edges but stable enough to endure.

Japan's now-ailing Cold War configuration rests on two pillars: integrated business groups known as "keiretsu" and an autonomous, effective and powerful bureaucracy. Both of these interest groups have maintained strong ties with the Liberal Democratic Party, which has controlled the government for all but six of the past 60 years. The enduring power of the party rests on its ability to mobilize keiretsu employees in elections and its connections within the bureaucracy.

During the Cold War, Japan's political order leaned heavily on the support of the United States, which needed a strong Japan to serve as a key ally in the Pacific. To bolster Japan, the United States granted it a variety of benefits including open access to U.S. markets while allowing Tokyo to shelter its own market and implement policies to maintain artificially low-cost exports. The United States also shared defense and computing technology, fueling Japan's electronics and high-tech booms. When the Cold War began to wind down, the U.S. approach shifted from support to quiet containment. 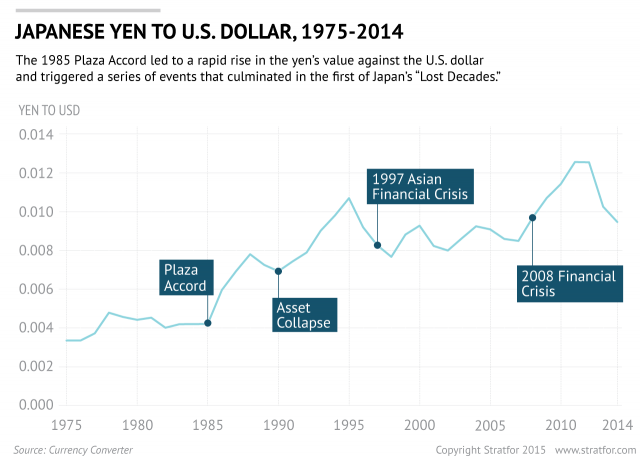 The 1985 Plaza Accord embodied this shift. The landmark agreement between the United States, France, West Germany and Japan allowed the U.S. dollar to depreciate relative to the yen and deutsche mark to bring the United States out of recession by curbing U.S. inflation and making its exports more cost competitive. But the deal was a bad one for Japan. The rapid rise in the yen's value against the dollar between 1985 and 1987 undermined the low-cost export sector and sparked an enormous asset price bubble in Japan. When that bubble finally burst in 1990, it triggered a banking sector crisis that sent Japan's GDP growth tumbling from an average of 5-7 percent annually in the mid-1980s to near-zero percent by 1993, initiating the first of Japan's Lost Decades.

Fueled by newfound purchasing power, Japanese investment began to move overseas into developed markets. Many companies also moved operations to take advantage of low-cost labor in Thailand and China. Such offshoring has continued over the past few decades, undermining the domestic job market.

Since the 1990 banking crisis, Tokyo has made several attempts to revive economic growth through fiscal stimulus and structural reforms. All have failed; Japan's problems require much deeper structural reforms. Though leaders have tried to make these reforms, they have been constrained time and again by the alliance between business, bureaucracy and the Liberal Democratic Party.

Japanese Prime Minister Junichiro Koizumi, for example, pushed strongly for reform from 2003 to 2006. He attempted to break Japan's Cold War-era order to clear the way for necessary change. His efforts largely failed, as have those of other reformers, and Japan has remained stagnant. Because the country has failed to alter its fundamental order, Japan essentially has not grown since 1994. The country has managed to maintain high levels of overall employment, but a growing share of these jobs are part time. In the 1990s, part-time workers represented less than 20 percent of the workforce, but by 2014, this number had risen to nearly 38 percent. Meanwhile, Japan's sovereign debt has grown substantially since 1994 as Tokyo has borrowed to maintain the bureaucracy, sustain infrastructure investment, cover social services and health care costs and service past debts. 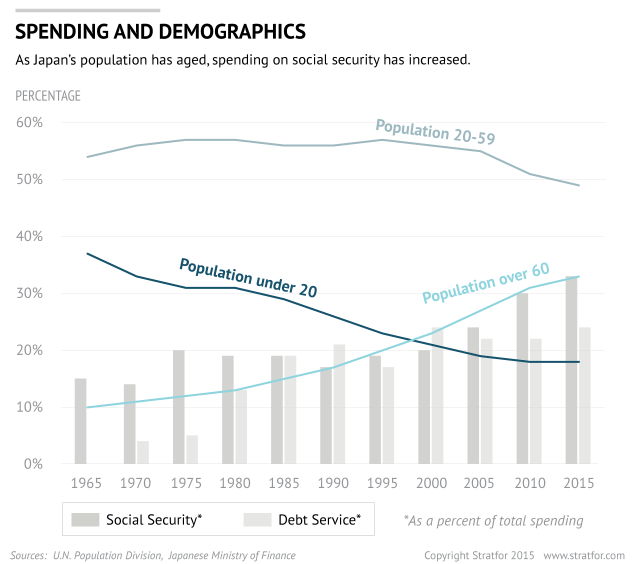 But the crisis of Japan's post-Cold War model is relatively mild. Despite two decades without growth, Japan is still the world's third-largest economy and maintains one of the highest GDPs per capita among major economies. Meanwhile, a consistently strong yen has meant rising purchasing power. Japan also has one of the world's highest research and development expenditure-to-GDP ratios and remains one of the world's most innovative high-tech economies. 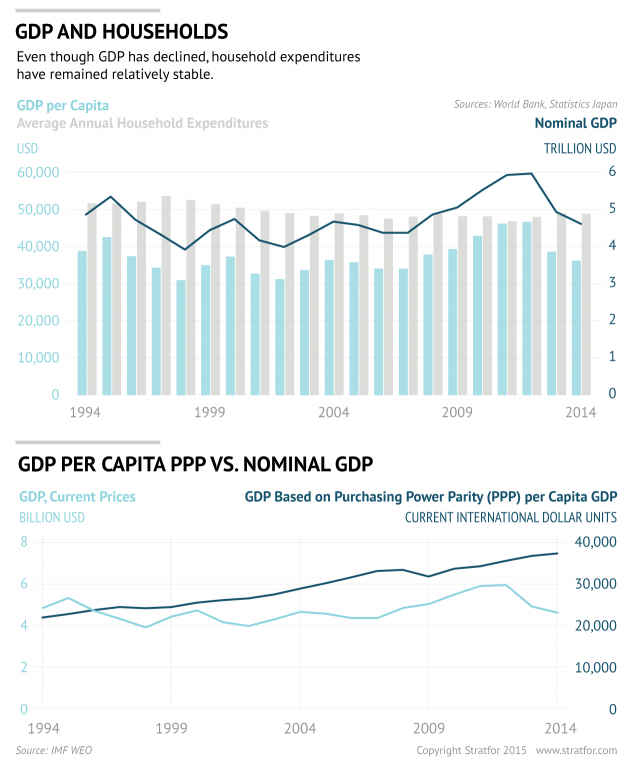 Recognizing that the Lost Decades have not led to an earthshaking national crisis is key to forecasting the next step for Japan. The country will shift only if it is forced to do so. If not, the status quo will persist more or less intact, albeit fraying at the edges, for the foreseeable future.

Two factors undergird the stability of the current order: high living standards and a stable regional position. The Japanese government, first and foremost, needs to guarantee that quality of life remains steady or improves. Tokyo will need to keep Japan's GDP constant, or at least declining slow enough to dovetail with its population decline, over the next several decades. The government will also need to find a way to pay the costs associated with the country's growing elderly population. Both will mean improving worker productivity to offset a shrinking workforce while helping Japanese industries remain globally competitive and effectively taxing overseas economic activity. Extracting government revenue from Japanese businesses abroad, which have used offshoring to keep themselves globally competitive, will be possible with some political wrangling. It will also be a crucial move, since the government will need to bolster domestic spending. Social security and health care costs now account for over 35 percent of government expenditures. At the moment, however, only 26 percent of the population is over 65. By 2040, the elderly will make up 36 percent of the population. The government will likely manage this by exploiting its close ties with the leading keiretsu. 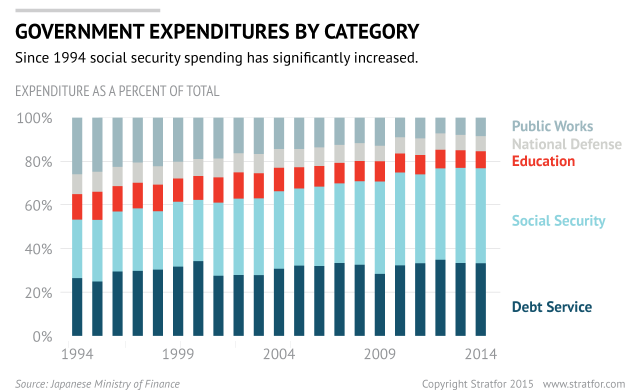 Tokyo will also push for incremental labor reforms and technological advances to improve worker productivity. To be politically viable, these reforms will need only to be gradual enough to avoid substantially increasing unemployment (currently just 3.4 percent) or underemployment in the near term. This will be tricky. For the next 5-10 years, Japan will see population aging and workforce shrinkage slow. Between 2015 and 2025, Japan's workforce will shrink by 5.5 million-5.6 million, down from its loss of 7.7 million-8.3 million workers between 2005 and 2015. Steadier population levels will raise the pressure on the government to maintain employment.

After 2025, and especially after 2045, extreme working age and overall population declines could force more fundamental changes in the structure of Japan's economy. By 2060, Japan's total population will fall by around 25 percent, while the working-age population will fall by around 50 percent. This will almost certainly have profound implications for the country's economy. Still, the population shifts will be gradual, and it will take some time before their full effects are felt. Without changes in Japan's external environment, the Japanese government could make incremental policy adjustments that address the impact of population decline on quality of life over the next three to five decades, at least enough to stave off a catastrophic change in the foundations of the current order.