The Geopolitics of Rare Earth Elements

Pollution from factories processing rare earth elements, which are essential for the production of mobile phones and computers, blackens the skyline of Baotou, in Inner Mongolia.

Editor's Note: At Stratfor, we use geopolitics to understand the constraints and advantages that geography confers on a country and the political, technological and economic decisions it compels. The exercise, taken to its logical conclusion, can extend all the way down to an atomic level. This occasional series examines the elements and the power that various combinations of protons, neutrons and electrons can exert on the world around us. In the latest installment, we look at rare earth elements.

Tucked into the sixth row of the periodic table, often represented by a single square expanded like a footnote at the bottom of the table, are the 15 lanthanides. When combined with yttrium and scandium, these materials are better known as the rare earth elements. Though they are used in very small amounts, their significance to the U.S. defense sector and to emerging and potentially disruptive technologies, combined with China's control over the majority of the market, has given the rare earth elements outsized geopolitical relevance.

Each element on the periodic table tells a geopolitical story. The rare earth elements, individually and as a whole group, are the quintessential symbol for the emerging, shifting global order, as China and the United States engage in both a trade war that may soon be resolved and a tech war that will continue for decades.

The rare earth elements are already critical to the U.S. defense sector, but rare earth mining, processing and fabrication capabilities will even more strongly influence geopolitical dynamics in the coming years as the world undergoes its nascent energy transition and transportation evolution. In the near term, China will benefit from its near-monopoly, but ultimately its own growing domestic demand will limit the duration of its control over the sector and eventually force production diversification.

The Same but Different 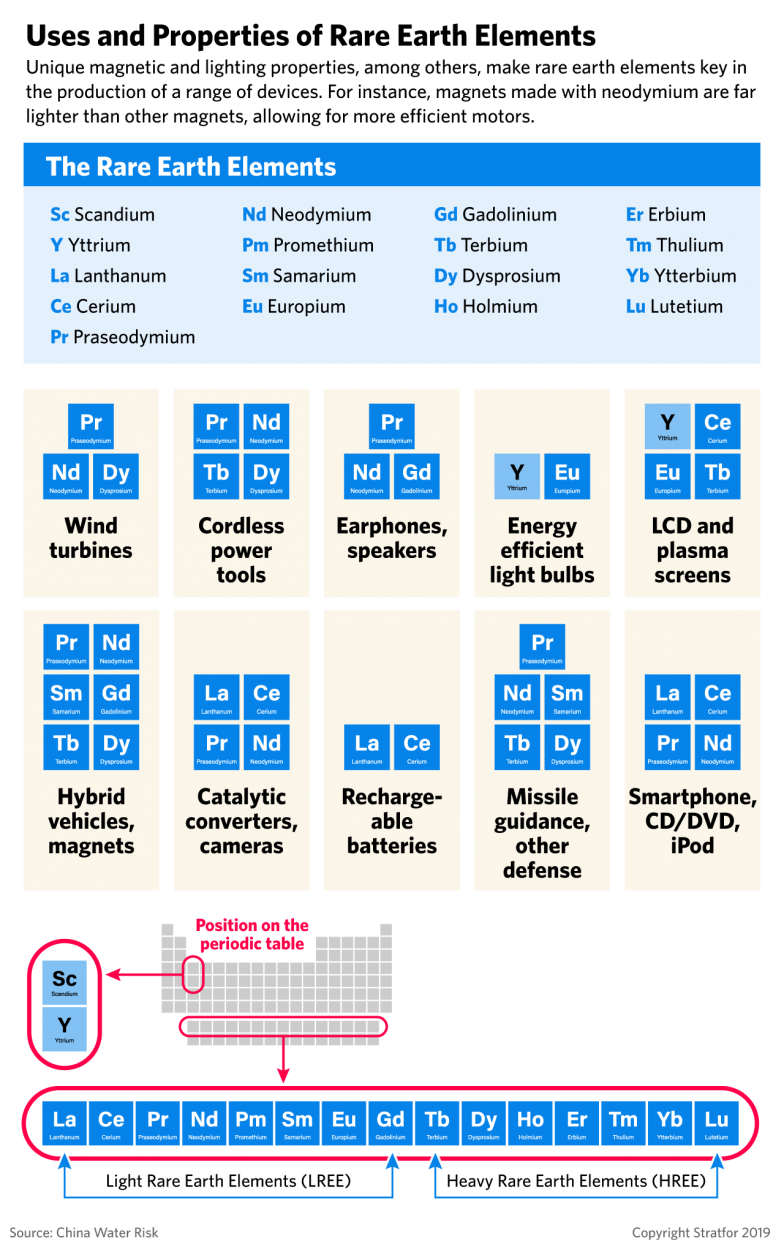 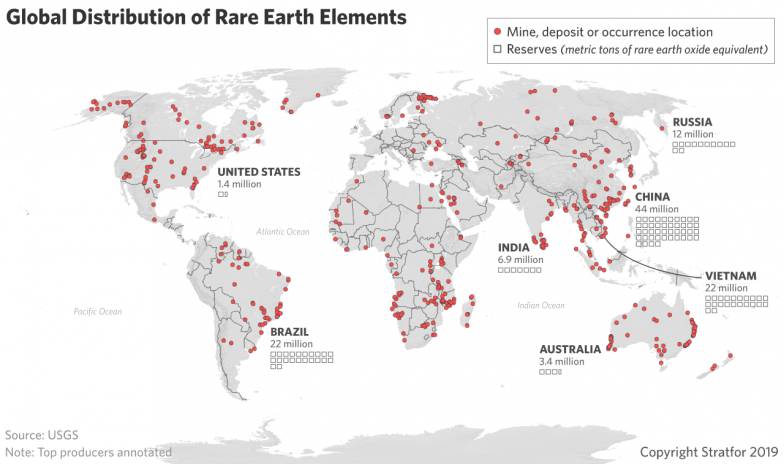 Even though China has ample resources and large mines, it has only gained its near monopoly on the global supply of rare earth elements by controlling the processing steps that remove the elements from the rest of the rock in which they are found. This control has presented a global supply risk, which became painfully evident in 2010 when China abruptly halted the export of rare earth ores, salts and metals to Japan, a primary consumer. The United States, which imports many of the final products that Japan produces with rare earth elements, felt a secondary impact. Though the ban was temporary, it sent shockwaves through the global community and prompted countries and producers to scramble to try and find, develop or reopen alternative rare earth element sources.

The United States, in part due to wariness of its defense technology relying so heavily on China, launched and won a World Trade Organization case against China, and in 2015 Beijing removed export quotas on rare earth elements. But in the years since the export ban on Japan, the rest of the world has had only marginal success in seeking sources outside of China. Australia was able to increase its production of LREEs with a new, environmentally controversial processing facility in Malaysia. And the United States' Molycorp mining company reopened Mountain Pass mine in California in 2012, only to declare bankruptcy and shutter the location just three years later. China still controls the vast majority of all rare earth production, and for some key medium and heavy rare earth elements such as dysprosium and terbium, which are necessary to produce permanent magnets in electric vehicles and wind turbines, China's control is virtually complete, with more than 98 percent of global supply. 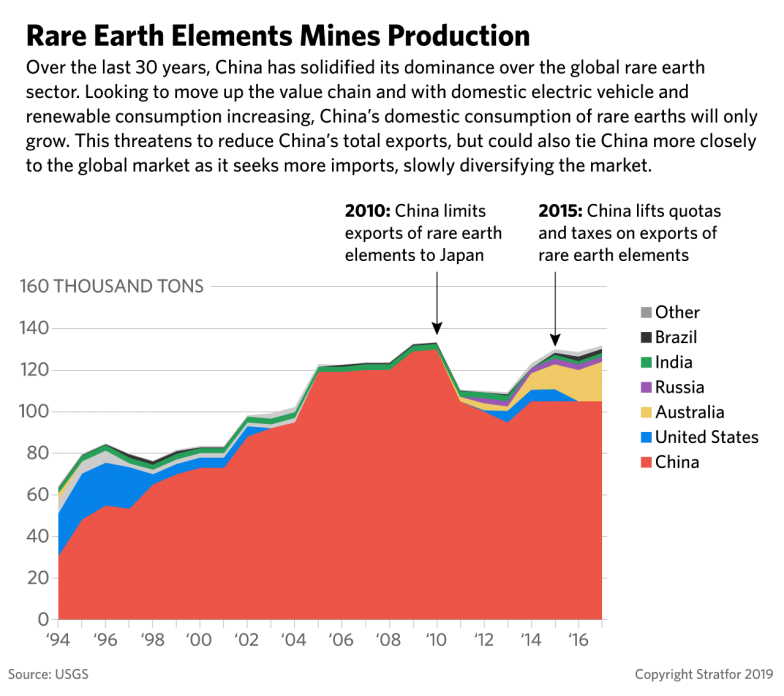 After all, prices for many of the rare earth elements have remained relatively stable since 2015 (changes in China's policy toward rare earth production perpetuated a small spike in 2017), meaning new projects are rarely economically feasible or attractive. Moreover, the refining process produces environmentally damaging byproducts that are extremely costly to contain and can draw criticism from environmental groups and local populations. 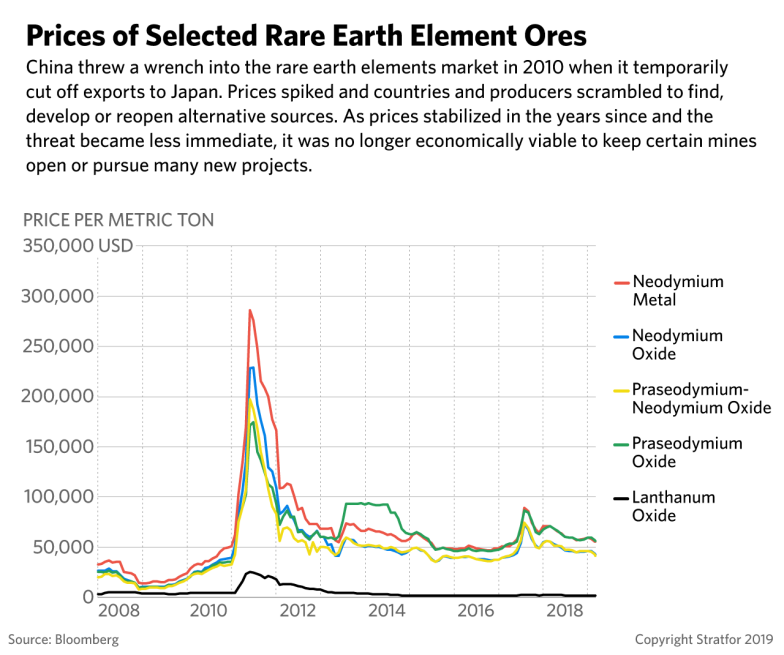 As part of China's broader efforts to curb the environmental damage and consolidate inefficient industries, Beijing has tightened the reigns on the rare earth refining sector. For example, it has cracked down on illegal mining in the country; illegal production of dysprosium oxide decreased by 34 percent from 2013 to 2017, according to Adamas Intelligence. And as part of consolidation efforts associated with its 12th Five Year Plan, Beijing intends to cap production of all rare earth elements at 140,000 metric tons no later than 2020. This would still represent a 20,000 metric ton increase from current levels. 2018's final quota was 120,000 metric tons, and the first half of 2019 is already showing a production increase. A key moment in China's continued efforts to combat illegal mining will come in May when Beijing decides whether to continue allowing rare earth element imports from Myanmar, a location long suspected of being along a laundering route for minerals such as dysprosium, terbium and gadolinium that have been illegally mined within China's borders.

In an attempt to drive innovation and rely less on China, the most recent National Defense Authorization Act (NDAA) prohibited U.S. defense agencies from purchasing permanent magnets from China. But the U.S. defense sector, which accounts for only a roughly estimated 5 percent of total U.S. rare earth elements demand — is not big enough to single-handedly drive the market to prioritize alternative production sources.

However, on a global level, demand for rare earth elements is increasing. Cerium and lanthanum are the rare earth elements that are consumed at the highest volume, but neodymium, dysprosium and terbium — all used in the aforementioned permanent magnets (also known as NdFeB magnets) — are among the group members set to receive more attention in the coming years as demand for electric vehicle motors and wind turbines increases. This demand growth is further supported by ambitious plans in Europe, China and some U.S. states to ban the sale of fossil fuel-powered vehicles and hit renewable energy targets.

China not only mines and produces most of the world's rare earth elements, but it also produces close to 90 percent of the world's permanent magnet alloys, and Chinese manufacturing of the permanent magnets themselves is on the rise. As magnet demand grows, so too will Chinese domestic consumption (due to both the country's own electric vehicle demand and its exports of the value-added product). Indeed, after controlling the world supply of rare earth elements for the better part of three decades, China has now become the world's largest importer as well. In 2018, China exported 53,000 metric tons of rare earth elements and imported 41,400 metric tons. In fact, a planned expansion of the Lynas facility in Malaysia and the Mount Weld mine in Australia will be at least partially supported by Chinese demand.

Growing demand for rare earth elements and potentially reduced Chinese exports driven by rising domestic demand logically should prompt countries to prioritize efforts to find alternative sources and bring them online. But at present, the prices of many rare earth elements make such advancements difficult.

New rare earth element production operations often struggle to succeed because of the high environmental costs associated with containing the caustic and polluting materials needed to remove rare earth metals from their ores. Japan, keenly aware of the vulnerability to its high-end manufacturing sector, continues — sometimes successfully — to scour the seafloor looking for rare earth supplies in territorial waters, but economically viable exploitation of those reserves remains years away.

The few new potential mining operations that have the greatest potential for success are in Australia and Greenland, but they do not fully address the unattractiveness and environmental cost of hosting processing facilities, including adhering to stricter environmental regulations and containment requirements in certain nations. In fact, Australia's Lynas, one of the few companies enabling global diversification away from China's production in LREEs since 2010, still battles with the Malaysian government over processing facilities there.

Recycling and technological adjustments to reduce the amount of rare earth elements needed or a move to an entirely alternative technology are other options. Substantial amounts of material are lost during purification processes, and additional steps during purification or fabrication could potentially recover additional material from what is now waste. Additionally, since rare earth elements do not degrade substantially during the lifetime of their products, used products could also provide recyclable material. Since most applications demand such a small amount of the elements, companies may begin to explore ways to increase supply through recycling. But at present any recycling efforts are too small in scale or will take too long to develop to offer realistic supply chain protection in the near future.

Should the threat to the rare earth elements supply become too great or the metals or magnets too costly, electric vehicle makers may look to other engine types. However, though not every electric vehicle model on the market uses permanent magnet motors, a large portion do. Changing product lines is a time intensive and costly decision that not all companies are willing to make, meaning that the death of permanent magnet motors is unlikely any time soon.

With few immediately viable alternatives, the global rare earth supply chain will remain vulnerable in the near term — and potential future undersupply now even threatens the elements' greatest producer, China. Now that China is more intimately tied into the rare earth elements supply chain through its own imports and as a manufacturer of value-added products, it is less likely to risk the economic ramifications of employing a ban for political purposes, but that doesn't mean its monopoly is any less threatening to countries such as the United States and Japan. Ultimately, shifting global energy priorities will eventually increase demand enough that the market must make real, concerted progress in developing new resources. But both the United States and Japan will remain especially vulnerable during the gradual diversification process — that is, unless their governments, at the behest of their defense departments, directly subsidize the development of alternative resources.