Getting to the Root of France's Muslim Dilemma

A woman holds a white rose near the Toulouse capital building in January 2015 beneath a motto of solidarity for the victims of the Charlie Hebdo attacks.

The jihadist attack on the offices of Charlie Hebdo signified the beginning of a new period of insecurity for France. Since those shots rang out a little over a year ago, France has been beset by threats, false alarms and more successful attacks. The latest of these, of course, took place in Paris itself, triggering the first nationwide state of emergency since 1961. Having been away for most of 2015, when I arrived back for the holidays I found the country had somehow changed. Disembarking at Charles de Gaulle airport's oldest terminal, whimsically known as le Camembert for its roundness, I found the same futuristic, grimy moving walkways and familiar odor of the Paris metro. Much was the same, but then I noticed that the usual airport security was gone, replaced by military personnel patrolling with automatic rifles.

France's security alert system, Plan Vigipirate, was developed in the late 1970s, updated once in the mid-1990s and twice more in the early 2000s. It reached its highest level of alert (scarlet) after the March 2012 Toulouse and Montauban attacks. In January 2015, however, authorities created a new, higher level to reflect the perceived current danger. As I traveled through Paris and the rest of the country I saw these security measures in action on the city's metro and on the country's high-speed train, the Train à Grande Vitesse. Security checks have become much more common, and this has led to some delays. False alarms triggered by such things as suspicious packets of cookies on a Nantes tram or forgotten luggage have stopped trains across the country. Over the New Year holiday, the center of Paris was cordoned off and people were individually screened before being allowed to continue on foot. Even the Christmas market in Strasbourg, far from Paris, was blocked off to automobile traffic, and identification checks were mandatory. 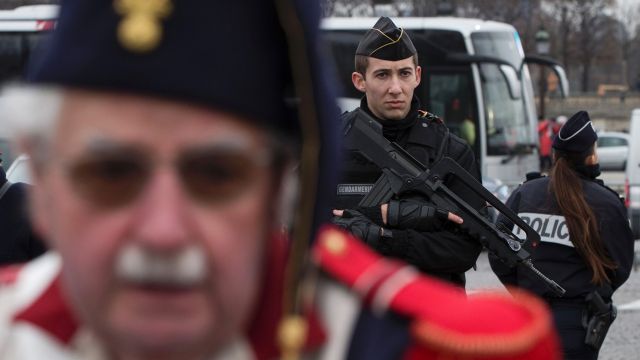 Security measures in the wake of attacks have been made more complex — and politically volatile — by France's sizeable Muslim population. French Muslims themselves, especially immigrants, have become the focus of a great deal of scrutiny over the past year. In 2010, 4.8 million Muslims lived in France, the second-largest population in the European Union and the largest in proportion to population: 7.5 percent. This has led many on the far right to call for policies specifically limiting Muslim immigration. Opinions, however, are mixed — a 2015 Pew Research poll found that only 24 percent of the country held unfavorable views of Muslims. Popular perception of Islam has played a moderating role in the government's reaction while ensuring safety for all, including the French Muslim population.

The mixed public reaction to right-wing proposals to impose anti-Muslim measures is rooted in France's unique and longstanding relationship with Islam. First contact came as early as the eighth century, when the Muslim Umayyad Caliphate pushed north to take control of the Iberian Peninsula and southern France. But when these holdings fell back into French hands, the Islamic world mostly receded from French history. This lasted until 1609, when Spain began to expel the Moriscos, former Muslims who had converted to Christianity. Many of them transited through France to the city of Agde to be handed off to the Ottomans. This came during a period of French expansion in the Mediterranean basin. With the defeat of the Ottomans in 1571 at the Battle of Lepanto and their departure from the Mediterranean, France had begun to assert itself in the Maghreb, a region that consists roughly of Algeria, Libya, Morocco, Mauritania and Tunisia. At its peak, France's colonial holdings encompassed a huge swathe of North Africa, with Algeria functioning as an official part of France, with Tunisia and Morocco as protectorates. 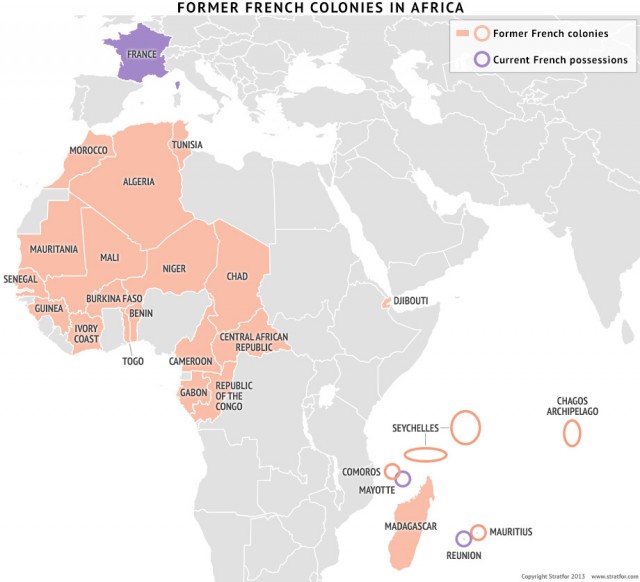 As the colonial period wore on, the French military relied increasingly on units of local, primarily Muslim, levies. After completing their service, many of these Muslim veterans left the colonies for France and remained there, eventually gaining citizenship. Following World War II, France fought against nationalists in North Africa to try and hold on to its colonies. Although it had lost all of these by the 1960s, Paris has remained involved in Maghreb conflicts. 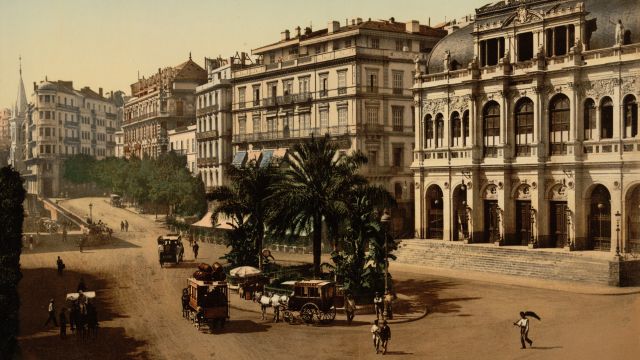 Immigration from North Africa to France tracked the country's colonial history, spiking in the mid-20th century as the empire dissolved. With the fall of French North Africa, a group known as the Pied-Noir (French, mostly Christian descendants living in Algeria, Morocco and Tunisia) fled in the aftermath of independence. Many young Pied-Noir men had moved to France during World War I but returned to the Maghreb. In 1962, when Algeria became independent, 800,000 Pied-Noir rapidly entered France, followed over the next decade by a further 150,000. In an effort to speed up integration, the French government granted them partial compensation for lost property.

Around the same time, local Muslim loyalists who had supported France in Algeria — collectively known as Harki — also left for France. Attitudes toward the Harki have varied. Charles de Gaulle vehemently opposed their resettlement, and, when the Harki remaining in independent Algeria were subject to persecution, Paris suppressed media coverage to maintain good relations, even going so far as to cover up murders. Today, however, the Harki are lionized as truly French "par le sang versé" — by spilled blood. In spite of the patriotic rhetoric, the Harki do not have an official comprehensive status in France, besides that of an unassimilated refugee group barred from traveling to Algeria. 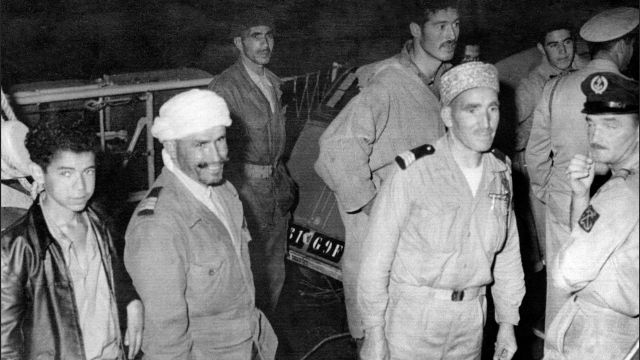 The Pied-Noir and the Harki arrived during a high-growth period known as "Les Trente Glorieuses," which lasted from 1945 to 1975, and their integration was somewhat easier because of this. Immigration continued apace after 1975, however, bolstered by the 1976 law allowing families of prior immigrants to settle in France.

Today, the legacy of France's relationship with the Muslim world is evidenced by the fact that everywhere in the country you meet people who are of foreign descent but as French as can be. My first landlord's parents, for example, emigrated from the Maghreb with practically nothing and now own several residential buildings. Success stories like these are not uncommon, and many of these people maintain only the loosest ties with the homeland of their parents or grandparents, much like Irish-, Italian- and German-Americans.

Immigration since the colonial period has made France the EU member state with the largest Muslim population by proportion. Although 7.5 percent of the population is still a small minority, the Muslim presence is magnified by the fact that most of France's Muslims are concentrated in a few areas. In keeping with French secular values, the government does not collect specific religious statistics, but the Central Bureau of Culture estimates the majority of Muslim immigrants have settled in Paris, Provence-Alpes-Côte d'Azur, Rhône-Alpes and Nord-Pas-de-Calais. Many French seem to regard Muslim immigrants as an undifferentiated whole — in spite of the longstanding special ties between France and North Africa and the fact that nearly 82 percent of French Muslims have origins in the Maghreb. And many Muslims categorize themselves as non-adherent, according to polls by the French Institute of Public Opinion.

But France does hold certain expectations when it comes to its North African Muslim immigrants — as it does for all new arrivals. Those who wish to integrate and function in French society must abide by the core values of "Liberty, Equality and Fraternity." In keeping with France's particular revolutionary — and nineteenth century — history, these are defined differently than I would have expected when compared with the United States. Liberty, for example, is associated more closely with collective liberty, not individual liberty. The freedom of a single person is often sacrificed in the interests of equality and fraternity, which are considered sacrosanct. This distinction is embodied by the constitutional principle of laïcité, essentially meaning secularism. This dictates that government institutions — and the public sphere — should be free of religious influence.

Although France has traditionally been Catholic, a high and growing proportion of the population is now atheist, and the overwhelming majority do not tie religion to morality or ethics. France's core values undergird the national schism over the wearing of headscarves in government schools. This controversy began in 1989 and raged through the 1990s, culminating in a national ban on headscarves and, later, on full-face coverings such as niqabs and burqas. 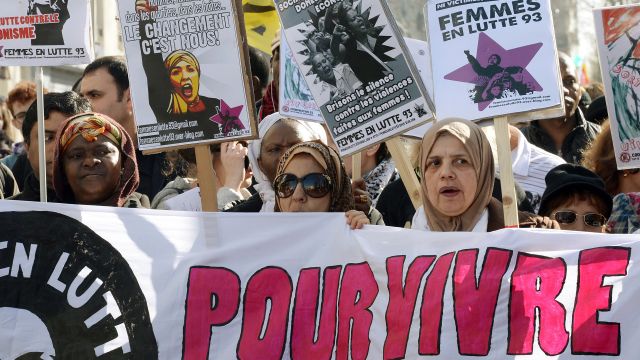 Today, immigrants to France are required to sign an "integration contract" before being granted a residence card. Although clearly aimed at Muslims and motivated by the headscarf controversies, the contract is required for all immigrants and I, a non-Muslim, was required to sign as well. The contract stipulates that men cannot repress women or engage in unsupported practices such as honor killing, facial covering or polygamy. It also requires that arrivals attend language classes as well as civics courses on French values that stress women's rights. Those later found not to be in compliance with the contract can then be required to undergo further training. Even though classes are officially for all immigrants, I was exempted and only required to attend history and civics lectures, not those on social welfare, values or language. Since the 2008 financial crisis, restrictions on immigration have become stricter, reflecting the strained economic circumstances and overwrought social services. This is the opposite of the thirty post-war years of prosperity when immigrants were welcomed to participate in the growing economy. 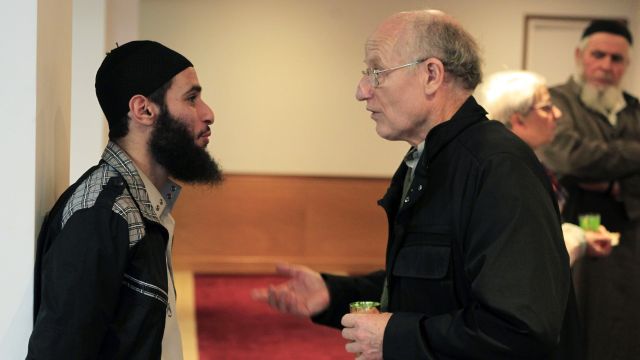 A French Muslim and a visitor speak at an open house event held at a mosque in Ajaccio, Corsica, in January 2016. (PASCAL POCHARD-CASABIANCA/AFP/Getty Images)

The national dialogue around French values and the longstanding role of many Muslim Maghreb immigrants have led many in France to feel deeply betrayed by the jihadist attacks of the past year. This is compounded by the fact that several of the attackers were French-born citizens, mostly second and third generation. In February 2016, the French government said it will explore options to remove the citizenship of dual-nationality persons convicted of terrorism. This is not without precedent — in 1848 the government passed measures to revoke the citizenship of individuals who rejected the abolition of slavery. Many supporters on the political right support this initiative, espousing the idea that "French citizenship is an honor, not a right." At the same time, the citizenship status of the attackers has undermined some of the anti-immigrant rhetoric coming from former President Nicolas Sarkozy and National Front leader Marine Le Pen against immigrants. Sarkozy in particular has lost a degree of public support. For its part, the French media has been careful to portray the attacks as isolated and unconnected, in spite of reports that several of the attackers were in communication with each other through Internet forums and social media.

Regardless of the outcome of upcoming political battles, the back-and-forth in France over Islam will continue for the foreseeable future as the country tries to square the risk of terrorism with its long history of integrating and accepting immigrants from the Muslim world.

Germany and France Go Back Into Lockdown. What’s Next?