The Global Impact of the Wuhan Coronavirus: 3 Scenarios

People wear masks against a new coronavirus while walking in Macau on Jan. 28, 2020.

Editor's Note: This security-focused assessment is one of many such analyses found at Stratfor Threat Lens, a unique protective intelligence product designed with corporate security leaders in mind. Threat Lens enables industry professionals and organizations to anticipate, identify, measure and mitigate emerging threats to people, assets and intellectual property the world over. Threat Lens is the only unified solution that analyzes and forecasts security risk from a holistic perspective, bringing all the most relevant global insights into a single, interactive threat dashboard.

This is a crisis that will likely be measured in months instead of weeks. The severity of travel restrictions so far means that losses in the billions of dollars should be expected in China, Asia and the rest of the world — in that order. At this point, its effects on public health remain relatively low — the common flu has killed far more people in the United States this season than the new virus has globally. However, the uncertainties around this new illness mean that authorities are assuming the worst until they can determine its true severity. Developments over the next two weeks will likely provide the information necessary to determine which scenario will be most likely. 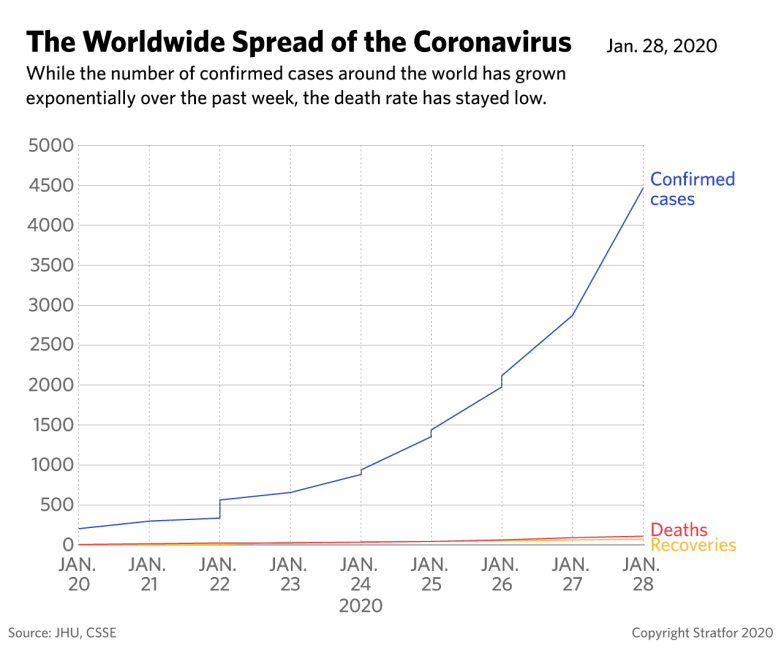 Assuming that the spread of the new virus follows patterns similar to those seen with severe acute respiratory syndrome (SARS) and Middle East respiratory syndrome (MERS), the early and aggressive response from Chinese and global health authorities will curb the effects of the new disease on global public health. Despite the quick reaction to the coronavirus, designated nCoV2019, the number of confirmed cases will continue to rise over the next two weeks, but then the infection rate will start to level off in mid-February. Chinese authorities and foreign governments will start to lift some of their restrictions, and the virus will be contained by the end of March — a little faster than the timeline for SARS in 2003. However, China's internal and external travel restrictions already guarantee a significant economic impact on it and the countries that rely on Chinese tourism.

The virus has a two-week incubation and is contagious for at least part of that time. In addition, close to 5 million people left Wuhan, China, before travel was restricted, meaning that tens of thousands of people could be spreading the disease around China and the world. In this scenario, confirmed infection rates start to spike in mid-February as patients start to show symptoms after the delayed onset of the virus. The death rate, which had been holding steady at about 3 percent, climbs as health authorities are overwhelmed and cannot treat serious cases that were previously nonlethal. By then, it's too late. But to address the problem, Chinese authorities start implementing travel restrictions on major cities, such as Beijing, Shanghai, Guangzhou and Chongqing. Foreign governments follow suit, implementing blanket bans on travel from China or on an increasing number of regions affected by the outbreak. Quarantines prolong the disruptions to supply chains and economies for months. The economic cost of the quarantines is compounded by lost productivity and the cost of the massive amount of resources needed to respond to the health crisis. Chinese authorities struggle to contain social unrest that breaks out nationwide as public frustration grows.

We assess this scenario as unlikely, because of the high level of awareness about the outbreak and the attention given to the virus around the world. In addition, diseases tend to be either highly lethal or easily communicable, but rarely both. Based on available information and current modeling, nCoV2019 appears to be more communicable than deadly, ultimately reducing its impact on public health. 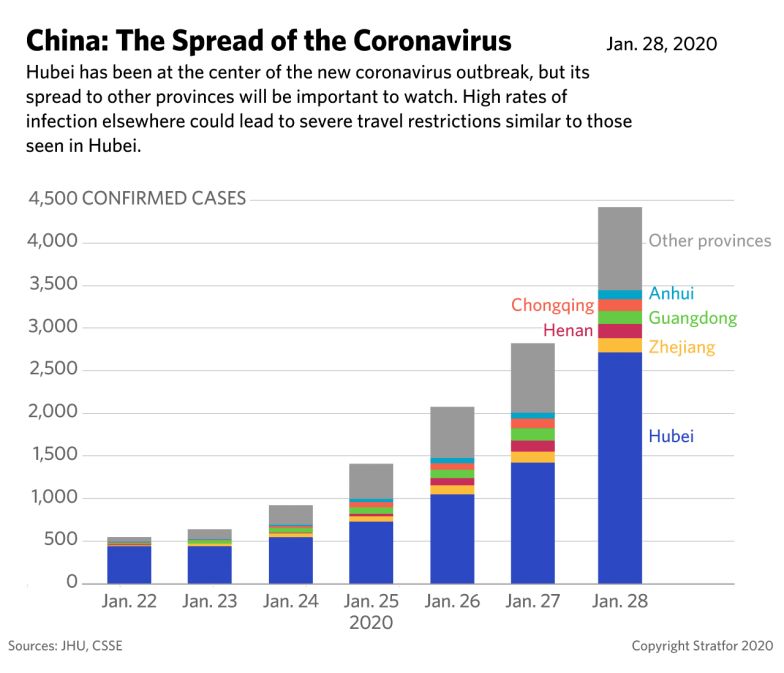 The up-to-14-day incubation period of the virus means that many unwitting carriers were able to get out of Wuhan and travel abroad before the quarantine began. Airport screenings failed to catch carriers who weren't showing any symptoms. In this scenario, international cases rise from the dozens to the thousands over the coming weeks, and the first deaths abroad are reported — mostly among the elderly and people with other health problems. However, the death rate remains low or falls below 3 percent as medical professionals start to better understand the virus and how to treat it. The new coronavirus exacerbates an already bad flu season, but the chances of serious illness or death in the general population are quite low. Like SARS, the economic effects of preventive restrictions prove far more disruptive than the impact of the virus on public health. Like MERS, no cure is found for nCoV2019, but infections taper off through the spring and eventually fade in the summer. Sporadic cases result in occasional but temporary travel restrictions in China and abroad.

We assess this scenario to be most likely. The apparent ease of person-to-person transmission and rapid spread mean that the virus will be difficult to contain and that it is likely to trigger more disruptions before authorities are able to get it under control. This is not a crisis that will be resolved overnight, but as restrictions on movement are gradually lifted in the coming months, authorities can prove to a skeptical public that conditions have improved.

Number of cases: The number of confirmed cases has been growing exponentially over the past three days. This is likely to continue for the next week at least and breach the 10,000 mark. Continued acceleration through February and into March would challenge the third scenario, but the effects of the growing number of infections depend heavily on the death rate and the severity of viral infection.

Geographic spread: Within China, Hubei province continues to account for over half of the total number of cases and is the focus of quarantine efforts. However, all other provinces, except Tibet, are reporting confirmed cases. The second scenario could become more likely if the infection rate spikes dramatically outside Hubei —  especially in major export and commercial hubs such as Tianjin, Shanghai, Guangzhou and Hong Kong. Severe restrictions on movement in those areas could have greater economic impacts than the restrictions on Hubei. New countries are reporting cases of the virus every day — we assess that countries that had direct flights to Wuhan before travel restrictions went into place are at higher risk of new confirmed cases. Developed countries, such as Singapore, Germany and the United States, will be better equipped to contain the spread internally, but developing countries, such Cambodia, Myanmar or those in Africa, will likely struggle to contain local outbreaks. 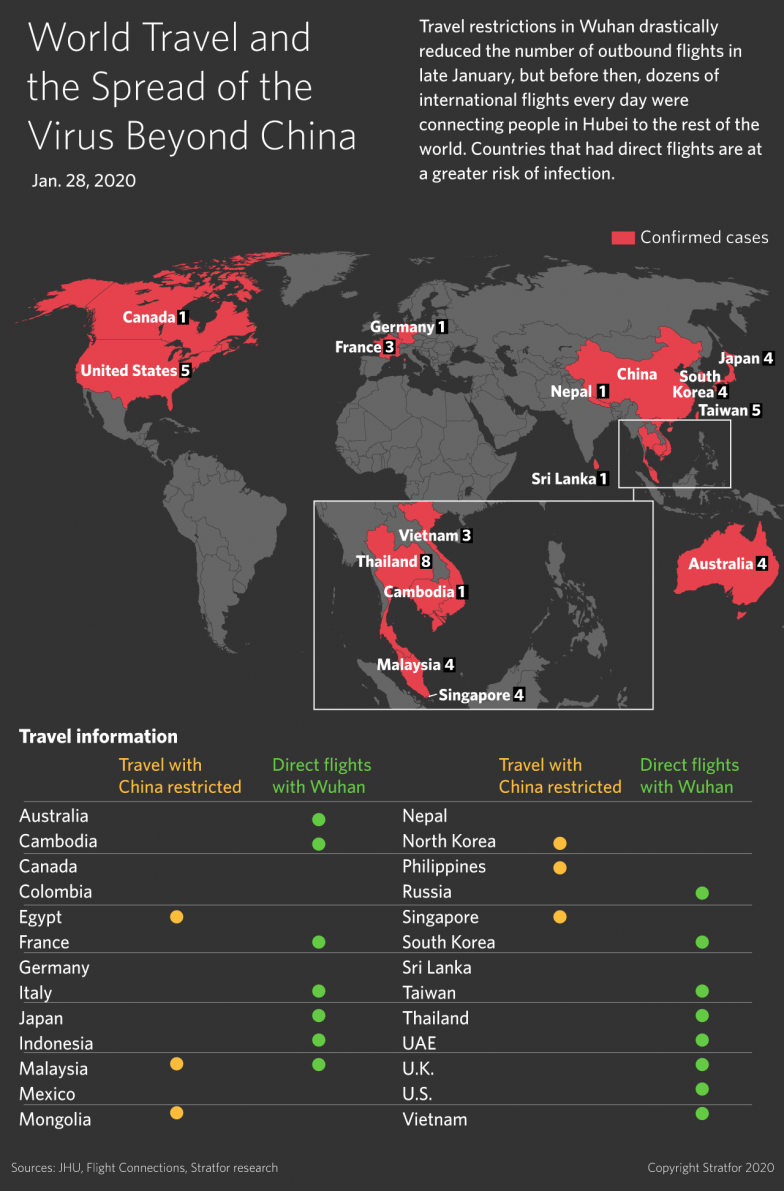 Death rate: This has been between 2 percent and 3 percent for the past week, a lower rate than both SARS and MERS. Developments in the next one-to-two weeks should confirm whether that holds true for nCoV2019. If the death rate climbs above 3 percent and the infection rate also continues to climb, we would be moving more into the worst-case second scenario.

Travel restrictions: The biggest impact comes from national authorities, but many airlines and private companies are restricting travel to China and especially to Hubei province. China itself has placed the most severe restrictions on travel so far, effectively quarantining Hubei province and prohibiting group tours abroad. Other governments in Asia, as well as the Middle East, are also restricting travel from China. These restrictions will have the biggest, immediate economic impact as the number of Chinese tourists drops around the world and as productivity decreases in Hubei, China's eighth most important province in terms of GDP. If infection rates and death rates climb through February, Chinese authorities will impose more restrictions, as will foreign governments, making travel to, through and from China exceedingly difficult.