The Grand Plans to Renew the European Union 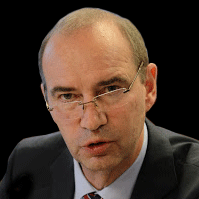 Wolfgang Klapper
Board of Contributors

Flags wave in front of the European Parliament building in Strasbourg, France. Many experts assume that the bloc's collapse is guaranteed, but two leaders have a more optimistic take on the Continent's future.

The European Union is riddled with overlapping problems. The euro currency crisis, diverging policies on Russia and Turkey, irregular migration patterns, rising nationalism, terrorism and Euroskepticism are just a few -- not to mention the Brexit. With all of these issues piling up, it's little wonder that some EU leaders have judged the European project to be on the brink of its demise. As Martin Schulz, the former president of the European Parliament, put it in 2015, "the failure of Europe is a realistic scenario." But just as many have assumed the Continent's collapse to be a reality, two political figures have offered much-needed optimism for Europe's future....