For months, Beijing and Washington have been engaged in a mounting rhetorical war over Chinese territorial claims — and island building — in contested waters of the South China Sea. The Chinese Foreign Ministry has cautioned the U.S. military not to exacerbate tension in the South China Sea by sailing naval vessels or flying aircraft near Chinese-held islands, many of which are located in waters also claimed by Vietnam, the Philippines and Malaysia. The Pentagon has countered that U.S. ships and aircraft will travel along any routes allowed by international law at any time and has told regional allies that it will soon conduct patrols near Chinese positions.

Though this standoff might seem like simple nationalist posturing between two Pacific powers, maritime disputes carry a special significance in Asia. Unlike in Europe, water is the organizing element of the continent, which wraps around the East and South China Seas, the Bay of Bengal and Indian Ocean, as well as countless peripheral lagoons and bays. Ownership of a particular island, reef or rock, and the right to name a body of water is more than a question of sentimentality — it is the foundation of many national policy strategies. Securing the right to patrol, build bases and regulate trade through these waterways can mean access to resources critical to sustaining economic growth and political stability.

Beijing's and Washington's divergent perspectives are rooted in radically different national and regional strategies. On the world stage, China portrays the South China Sea dispute as fundamentally a question of sovereignty. The United States, however, foregrounds concerns about freedom of navigation. Since the end of the Cold War, the United States has been the unquestioned pre-eminent power in the Pacific Rim, assisted by its allies, most notably Japan and South Korea. Simultaneously, however, China has been emerging as a potential regional hegemon, and the South China Sea has become the most visible area of tension.

A core but often unstated component of U.S. national strategy is to maintain global superiority at sea. By controlling the seas, the United States is able to guarantee the secure movement of U.S. goods and to deploy military power worldwide. This preserves global economic activity — feeding the domestic economy — while ensuring that any threat to national security is addressed abroad before it can reach the homeland. This state of affairs is enforced by the powerful U.S. Navy, but it is undergirded by Washington's particular interpretation of international law. 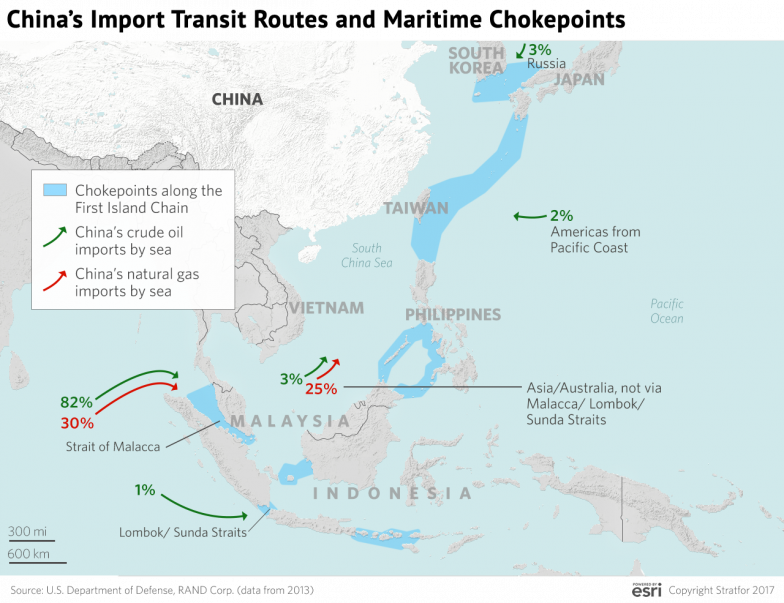 In China's near seas, the U.S. global imperative comes into conflict with China's emerging regional needs. Since the early 1980s, China has undergone a transition from an insular, self-sufficient pariah state to a major exporter. This has forced Beijing to reassess its maritime risks and vulnerabilities. China is no longer able to protect its national economy without securing the maritime routes it needs to maintain trade and to feed its industrial plant.

The South China Sea is one such essential waterway, made more important by the value of the sea's fisheries and subsea resources such as natural gas. But addressing the risks of its near seas means tackling the time-consuming and costly project of building, training and deploying a stronger blue-water navy while also establishing a greater maritime buffer along the Chinese coastline. China's assertion of ownership and control in the South China Sea, coupled with liberal interpretations of its rights within its claimed exclusive economic zone, gives Beijing at least a modicum of greater security. With neighbors unable or unwilling to directly challenge China’s concrete actions in the sea, and the United States hesitant to use force to halt Chinese expansion, Beijing is reshaping the status quo unimpeded.

In pursuit of their respective interests, the United States and China have chosen to interpret international maritime law differently. The precise legal nature of various landforms has become key. There are four basic geographic terms at play: island, rock, low tide elevation and artificial island. Understanding the ambiguity of each of these terms is key to understanding conflict in the South China Sea.

According to international law, an "island" is a naturally formed elevation that is always above the high-tide level and is habitable and/or capable of sustaining economic activity. A "rock" is also naturally formed and above the surface but not necessarily suitable for habitation or economic exploitation. By contrast, a "low tide elevation" can be covered by water at high tide but is exposed at low tide. An "artificial island" differs from an island in that it is not naturally formed. Disputes are further complicated when considering submerged rocks, seamounts and other subsea landforms.

In pursuit of their respective interests, the United States and China have chosen to interpret international maritime law differently. The precise legal nature of various landforms has become key.

Beijing and Washington each have their own interpretations. China asserts that its South China Sea holdings are islands and are part of sovereign Chinese territory, giving them the full 12-nautical-mile territorial sea and a 200-mile exclusive economic zone. The United States says that while it has no official stance on maritime disputes, it interprets the holdings as either low tide elevations or artificial islands. This reading gives U.S. vessels the right to sail within the 12-nautical-mile limit.

China's construction projects on several South China Sea reefs and islets have stirred the ire of its Southeast Asian neighbors. Chinese crews have been dredging and piling up sand; expanding reefs and islets; and building runways, housing, piers and other facilities on several landmasses. Vietnam complained recently about new Chinese lighthouses, for example, and the Philippines has taken its counterclaims to international courts. 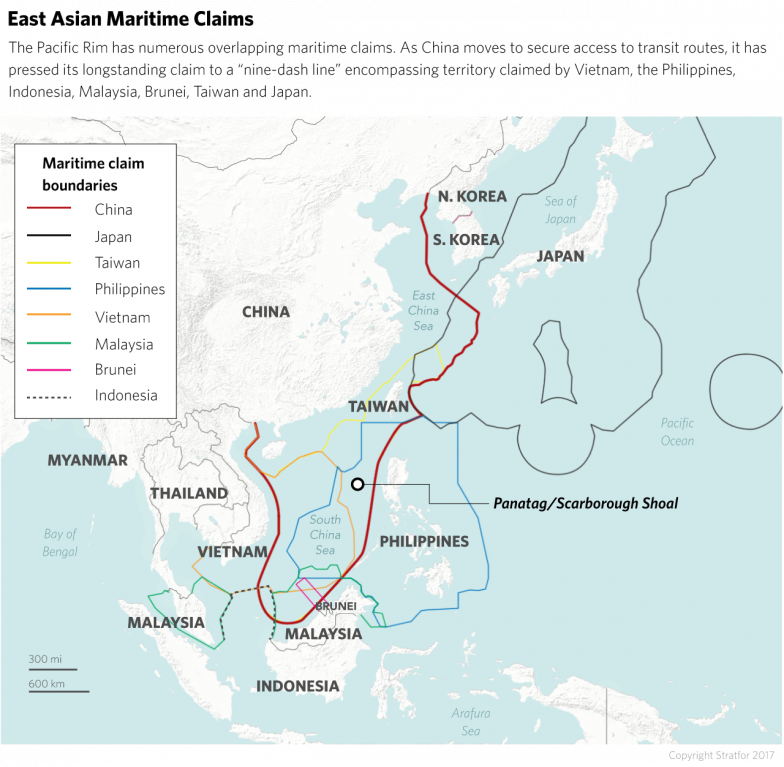 The Philippines has borne the brunt of China's expansion, and much of the Chinese construction has been on islands Manila claims. Manila's status as an ally risks drawing the United States into the conflict, but Washington, while supporting Philippine security, maintains that it takes no side in competing South China Sea claims or, for that matter, any disputes in maritime Asia. Rather, Washington justifies its concern about the South China Sea as simply a defense of the right to freedom of navigation. This freedom includes the regular and irregular patrols of U.S. ships, submarines and air assets within the 200-mile exclusive economic zones of other states, although not within the 12-nautical-mile territorial seas.

China feels it can manage the opposition from various members of the Association of Southeast Asian Nations (ASEAN) by both manipulating ASEAN as a whole and by leveraging economic and military influence. Beijing also believes it can manage Washington, betting that the United States will work to avoid any real conflict with China in the South China Sea. This has been the case so far. Although Washington has challenged Beijing’s take on what is and is not allowed in the waters of the South China Sea. And whether China has a legitimate claim to the seas there, it has been careful to avoid any action that could lead to physical confrontation. China is well aware of U.S. reluctance to escalate the conflict and takes advantage of it to keep expanding its presence.

But Beijing does fear one thing in the South China Sea: the involvement of Japan. Tokyo, long a passive power in the Pacific Rim, is now embarking on the long process of reasserting itself. If Japan decides to become more involved in the South China Sea, China’s strategy will become significantly more complicated. Recent signs indicate this may be starting. Tokyo recently carried out search-and-rescue drills with the Philippines, as well as other exercises with Southeast Asian states, flying an EP3 out of Palawan over parts of the South China Sea. Japan is negotiating a visiting forces agreement with Manila to allow Japanese ships and planes to refuel and resupply in the Philippines. It is also offering to fund and supply ships and aircraft to the Philippine and Vietnamese coast guards and navies. And Tokyo and the United States have agreed in principle to carry out joint patrols in the South China Sea, perhaps as early as next year.

As an island nation with few natural resources, Japan’s economic lifelines can only pass through the seas — it has no land options.

Japan has its own concerns about South China Sea claims. As an island nation with few natural resources, Japan’s economic lifelines can only pass through the seas — it has no land options. China’s expansion of activity in the waters, following its assertive activities in the East China Sea, have made it clear to Tokyo that there has been a real change in the Asia-Pacific and that Japan needs to secure its interests. While China has suggested it may accept continued U.S. patrols, it has also asserted that it absolutely cannot accept any role for Japan in the South China Sea, arguing that Japan has no legitimate claims or interests in the waters.

China’s kneejerk response against Japan is in part conditioned by Tokyo’s history of belligerent imperialism. More concretely, however, Beijing recognizes that Japan will have a freer hand in the Pacific than the globally committed United States. The United States is further limited because it, like China, is a nuclear power. Japan is not. This places a stopgap on escalation similar to the constraint on the United States and the Soviet Union during the Cold War. This also explains why Beijing has been so set against potential U.S. deployment of Terminal High Altitude Area Defense anti-ballistic missile systems in South Korea. This system would give U.S. missile defense reach onto the Asian mainland and, over time, potentially weaken the viability of a Chinese nuclear counterstrike capability.

China has pledged to not use nuclear weapons against a non-nuclear state. If Beijing intends to uphold that pledge, its ability to threaten Japan is diminished. All of this adds up to a greater threat if Japan and the United States align in the South China Sea. A combined Japanese-U.S. force would be a far different challenge for China than any single force. China is now trying through numerous channels to make clear to the United States that Japan does not have the same constraints and may be willing to gamble with the U.S. security for its own interests. And Japanese aid to the Philippines, by extension, would embolden Manila to potentially trigger a short, sharp clash with China on a disputed islet, armed by Tokyo and able to rely on Washington to step in if things escalate.