The Growing Importance of the Arctic Council

The Arctic is expected to become more important in the coming decades as climate change makes natural resources and transport routes more accessible. Reflecting the growing interest in the region, the Arctic Council granted six new countries (China, India, Italy, Japan, South Korea and Singapore) observer status during a May 15 ministerial meeting in Kiruna, Sweden. By admitting more observers, the Arctic Council — an organization that promotes cooperation among countries with interests in the Arctic — will likely become more important as a forum for discussions on Arctic issues. However, this does not necessarily mean it will be able to establish itself as a central decision-making body regarding Arctic matters.

The Arctic Council was established in 1996 by the eight countries that have territory above the Arctic Circle — the United States, Canada, Iceland, Denmark, Norway, Sweden, Finland and Russia. Its main purpose was to be an intergovernmental forum (also involving Arctic indigenous groups) that promoted cooperation primarily regarding environmental matters and research. The Arctic Council's central focus has remained on environmental issues in the Arctic, and the body has had no meaningful decision-making power.

However, during this year's meeting, the council's members signed a legally binding agreement coordinating response efforts to marine pollution incidents. The council signed a similar agreement on search and rescue collaboration in 2011. These agreements, as well as the interest from countries around the world in gaining observer status, highlight the growing relevance of the Arctic Council and the Arctic region. 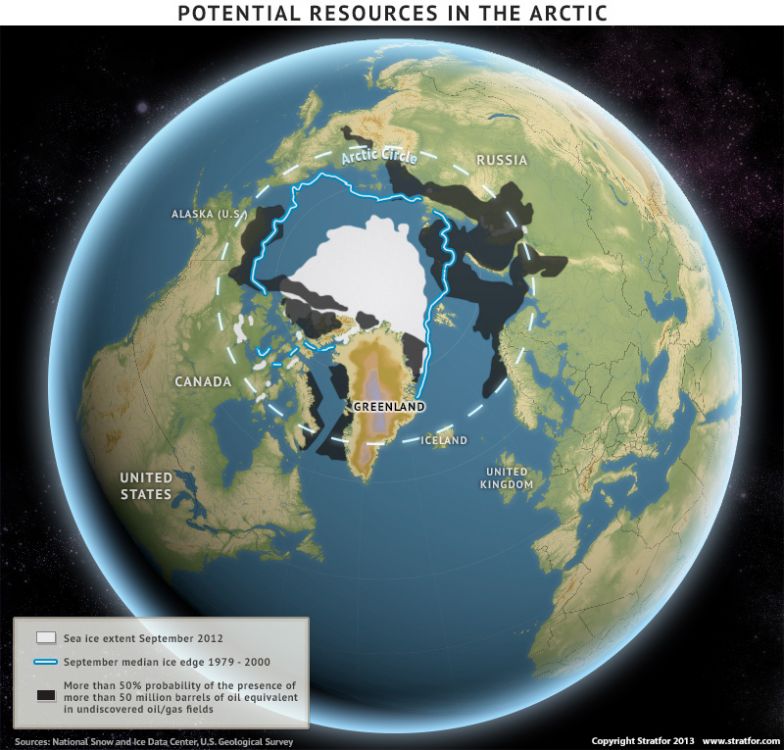 Map - Potential Resources in the Arctic

Satellite data collected since 1979 shows that both the thickness of the ice in the Arctic and range of sea ice have decreased substantially, especially during the summer months. According to the United States' National Snow and Ice Data Center, the amount of Arctic ice (usually at a minimum during September) was 3.61 million square kilometers (1.39 million square miles) in September 2012 — close to 49 percent lower than the average amount of ice seen between 1979 and 2000. The melting of the ice facilitates natural resource exploration in the high north. U.S. Geological Survey estimates from 2008 suggest that 13 percent of the world's undiscovered oil and 30 percent of undiscovered natural gas reserves are located in the Arctic Circle.

Moreover, the retreating and thinning of the ice opens up new trade routes. In 2012, 46 ships transporting a total of 1.3 million tons reportedly used the Northern Sea Route, which runs along the northern coast of Russia; this represents a considerable increase from 2011, when 34 ships transported approximately 820,000 tons. In response to the route's growing importance, Russia set up the Northern Sea Route administration in March to supervise shipping. 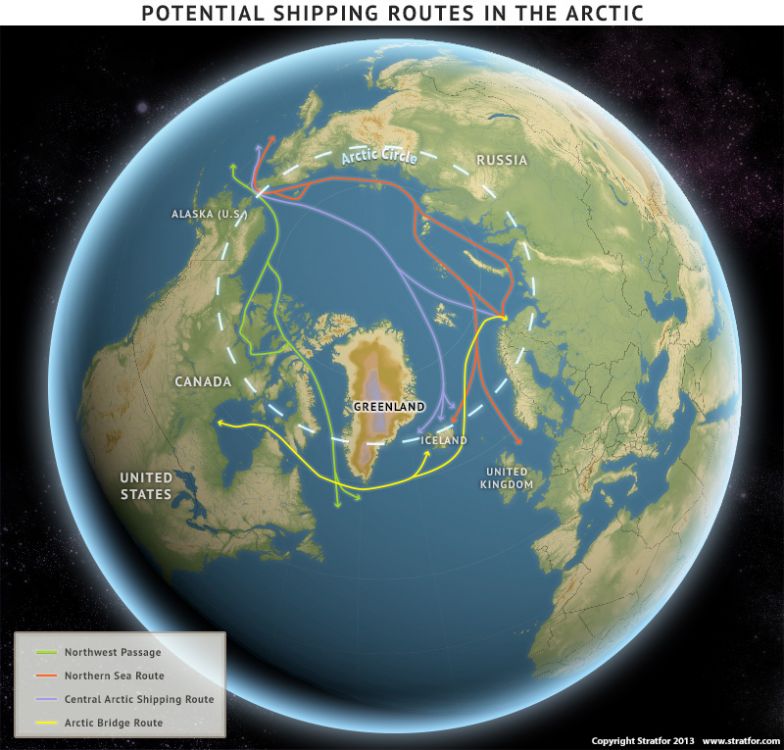 Interest in profiting from greater access to the high north is not limited to countries around the Arctic Circle. Europe has a vested interest in alternative shipping routes to Asia becoming more economically viable, since such routes would allow trade to circumvent numerous bottlenecks like the Suez Canal and increase access to Asia's growing consumer markets. China has also shown a particular interest in the Arctic, and has lobbied the Nordic countries to support Beijing's bid for observer status in the Arctic Council. For countries like China that lack direct access to the Arctic, diplomatic ties and good bilateral relations with the Arctic countries, as well as participation in groups such as the Arctic Council, are important to improving their chances of profiting from the new access to shipping lanes and natural resources. Even though the observer status does not give countries direct influence in council matters, participating in meetings and research helps these countries know what the main Arctic players are planning. Countries may even intensify relations with individual Arctic Council members to gain better access to resources (China's interests in Greenland and Iceland illustrate this).

Sailing along the Northern Sea Route rather than through the Mediterranean Sea and Suez Canal significantly reduces the trip between Rotterdam and Shanghai — the Northern Sea Route is around 20 percent shorter. This translates into significant savings in terms of fuel and crew costs. But despite the melting of the ice, the difficulty of navigation, seasonal constraints on use, high insurance costs and weak infrastructure along the route will continue to limit the economic viability of the Arctic route.

While the Arctic Council is likely to gain attention as a forum for policymakers to broadly discuss Arctic-related issues, it will struggle to coordinate decision-making as the number of interested parties in the Arctic grows. On May 10, the U.S. government presented its new general strategy for the Arctic. Little concrete information was revealed, but a clearer plan for implementing the strategy reportedly will be worked out in the coming months. This shows that national Arctic strategies are still being defined, and countries are still considering what kind of resources to commit to the region. As the priorities for countries in the Arctic become more concrete, the differences that will have to be resolved and issues that will have to be debated will become more difficult for bodies like the Arctic Council to deal with.