A Guide to Germany’s Federal Election

Germany’s upcoming federal election will result in a moderate government that supports EU and NATO membership, seeks fiscal consolidation after the COVID-19 pandemic, and implements policies to reduce carbon emissions over time. But the pace of implementation and depth of these policies will depend on the ideological composition of the next government coalition. Germany will hold a federal election on Sept. 26, the first in 20 years where conservative Chancellor Angela Merkel will not be a candidate. Opinion polls suggest the election will produce a fragmented Bundestag. As a result, the negotiations to form a coalition will take several months, and Germany may not have a new government until late 2021 or early 2022. The new government will likely include moderate center-left and center-right parties, while excluding the anti-immigration and euroskeptic Alternative for Germany (AfD), as well as possibly the anti-globalization and anti-NATO Die Linke. This means that the new government in Berlin is unlikely to result in drastic disruptions in German domestic or foreign policy. 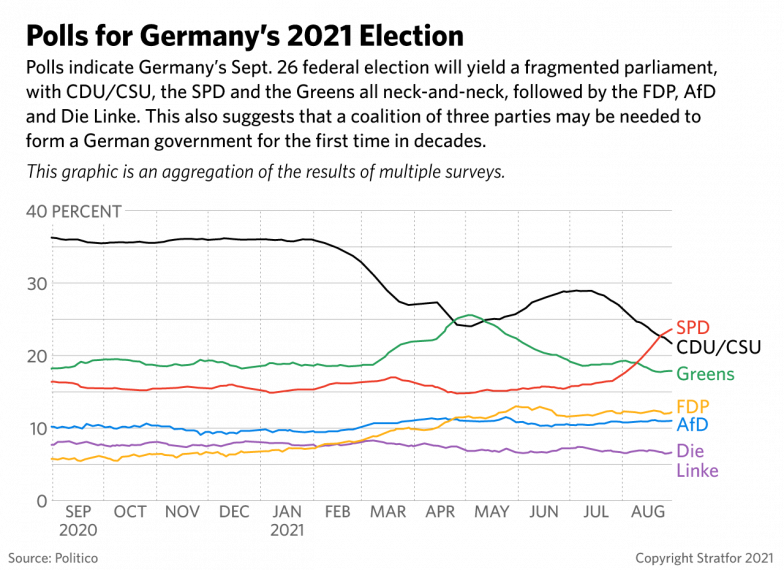 At least four coalitions are possible, while a minority government is unlikely but not impossible. After the election, German parties will start negotiations to form a government and appoint a chancellor. The chancellor must receive support from a majority of all the elected members of the Bundestag (and not just a majority of lawmakers present at the time of the vote). If after three attempts the Bundestag fails to appoint a chancellor, Germany’s president has the power to appoint the candidate who received a plurality of votes, effectively creating a minority government.

According to current polls, the following four alliances could control a majority in the Bundestag following the Sept. 26 election:

This government would seek to progressively lift COVID-related stimulus measures and restore Berlin’s pre-pandemic policy of no fiscal deficits (known in Germany as the “black zero”). Similarly, such a coalition would restore the country’s constitutional debt brake, which was suspended at the start of the pandemic. While this government would support EU integration, it would be skeptical of measures that deepen the sharing of financial risk in the eurozone (such as the introduction of a common deposit guarantee for EU banks). It would also resist a push from Mediterranean countries to make permanent some emergency measures that were taken during the peak of the pandemic (most notably, allowing the European Commission to borrow from financial markets on behalf of member states). This government would be critical of countries like Russia or China over human rights and political issues, but would also seek to preserve economic and investment ties with them and to cooperate on issues such as climate change.

Environmental policy could be a source of friction for this coalition because the FDP and the CDU/CSU would push for a balance between the energy transition and protecting the competitiveness of German industries, while the Greens would push for a faster transition even if it leads to higher operating costs for companies and tighter regulations. In fact, discrepancies between the FDP and the Greens over environmental policy contributed to the collapse of the coalition talks between the CDU/CSU, Greens and FDP after the 2017 general election. 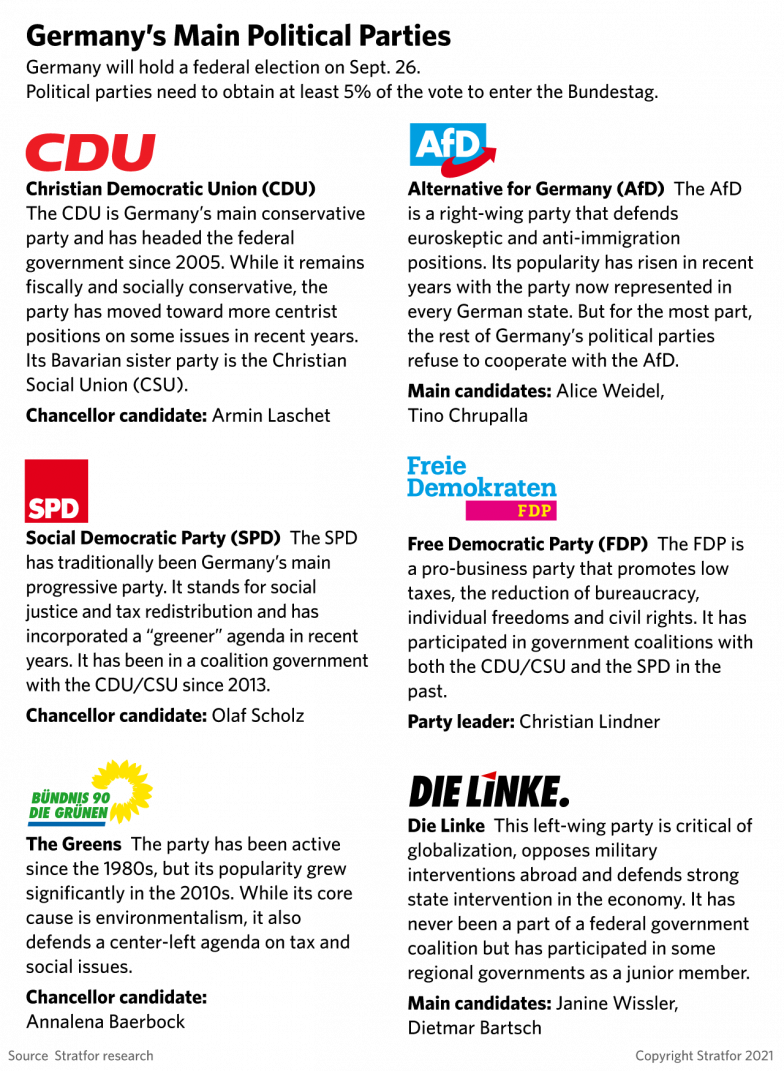 This government would expand stimulus measures and increase welfare spending, in part through higher taxes for wealthy households and large companies. Such a government would also increase cooperation with Mediterranean countries on issues such as fiscal federalization and greater protection for EU companies from external competition. It would also be a strong defender of the European Union’s Green Deal package of climate change policies, and would push for faster and deeper targets for carbon reduction in the bloc. In addition, this government would take a more hawkish approach toward China and Russia, with Berlin more willing to increase pressure on both countries over human rights, cyberattacks and environmental issues.

Most of these policies would create friction between the fiscally conservative FDP and the progressive SPD and Greens. In particular, the issue of Germany’s fiscal deficit and the competitiveness of German businesses would create problems with the FDP that could threaten its membership in the coalition. While the FDP wants to tackle climate change primarily through innovation and the reduction of bureaucracy, the Greens are more willing to increase regulatory and fiscal pressure on households and businesses.

This would be most similar to the Merkel government since it would maintain the current “grand coalition” between the CDU/CSU and the SPD, adding the Greens to the formula to increase the push for environmental policies. While such a configuration of parties is mathematically possible, the CDU/CSU and the SPD are reluctant to govern together for another period after spending the past eight years in a coalition, which has diluted their image in the eyes of voters and weakened their appeal. Another “grand coalition” would further erode both parties’ popularity, hence why they’ll seek to avoid it.

This government could be subject to frequent internal disputes because the three members of the coalition would have a relatively similar number of seats in the Bundestag and there would not be clear “senior” and “junior” members. This would make every political decision (from the appointment of cabinet positions to the overall direction of policy) a source of infighting that could slow down the decision-making process.

Similar to the previous scenario, this would largely be a continuation of Germany’s current “grand coalition,” but with a greater emphasis on fiscal consolidation and the reduction of bureaucratic red tape, as well as a faster digitization of the German economy to make it more competitive.

The CDU/CSU and FPD’s fiscal conservatism could produce clashes with the SPD, which is campaigning on promises such as reinstating a wealth tax, introducing a financial transaction tax and raising the minimum wage and pensions.