How Blockchain Works and Why It Matters

The underlying blockchain technology that anchors cryptocurrencies such as bitcoin could be far more useful than any currency itself.

Disruptive technologies such as blockchain will impact future economies and societies just as surely as industrial manufacturing did in previous centuries. Though new developments in materials, computing, automation and related technologies may not have an explicit impact on our quarterly or even our annual forecasts, their mid- to long-term implications are manifold. Much as industrialization led to global inequality, however, future technologies could actually fuel unrest in certain parts of the world, especially as markets move away from the kind of low-end manufacturing seen by many developing countries as a clear-cut way to achieve economic prosperity.

True digital currencies were more common in science fiction than in reality until quite recently. The big stumbling block for electronic money that doesn't have a physical form is the issue of ownership. How can you truly possess something of intrinsic value that can be effectively copied ad nauseam? In 2008, a paper published under a pseudonym, Satoshi Nakamoto, introduced the world to the digital currency bitcoin, a groundbreaking development in its own right. But more important, however, was the underlying algorithm that made the cryptocurrency work.

Distributed ledger technology is the truly revolutionary development that enables cryptocurrencies to function.

The technology that anchors bitcoin, known as the blockchain, was the truly revolutionary development. Commonly referred to as distributed ledger technology, blockchain is already considered to be a disruptive technology and will affect a number of different industries beyond the financial sector, including but not limited to shipping and logistics, aerospace and defense, retail, health care, and manufacturing. 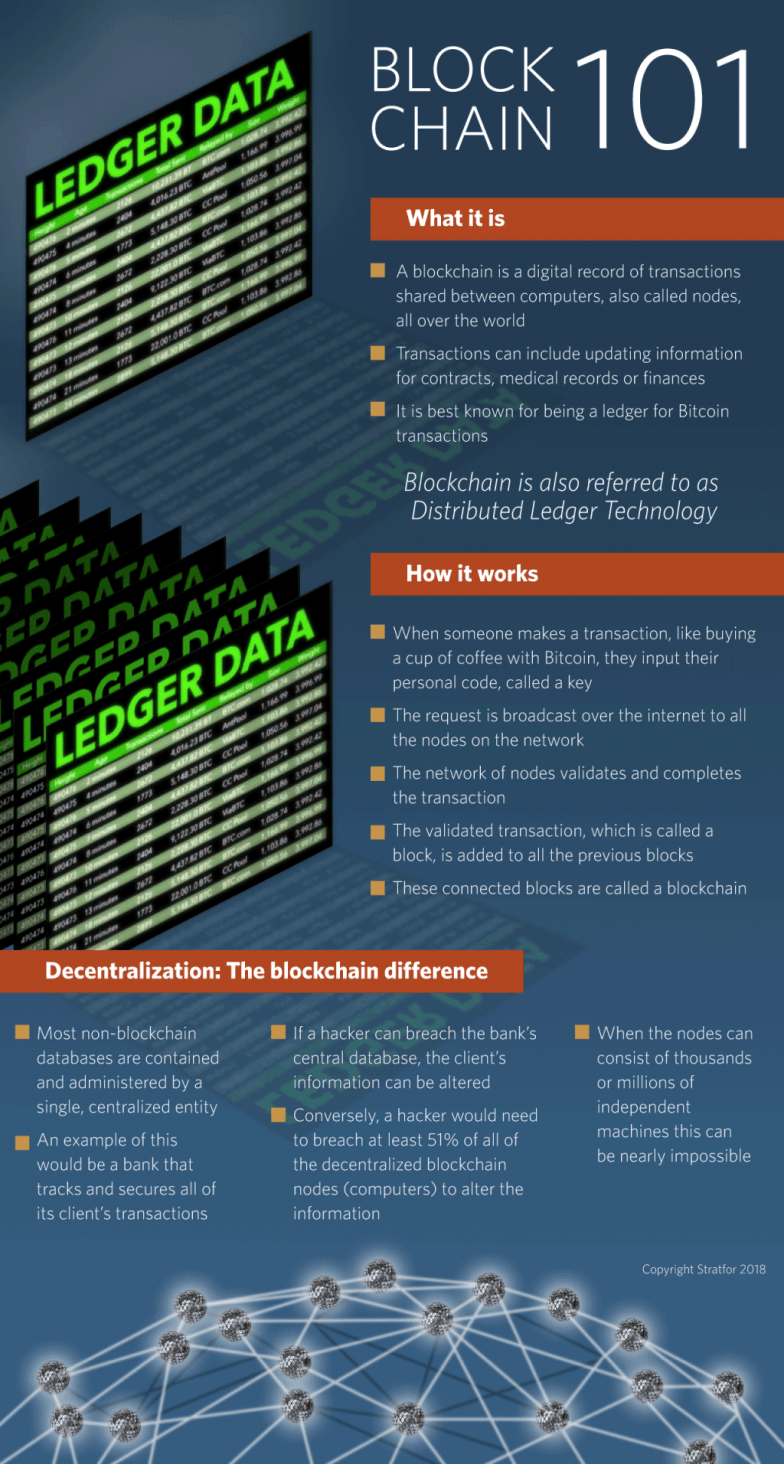 In the case of digital currencies such as bitcoin, which pioneered the technology, transactions are recorded in a shared public ledger — the ubiquitous blockchain. The currency (or contract or other exchange of information) is not controlled by a central entity like a bank but is instead managed by an online community. Members with powerful computers are encouraged to maintain the transactional register by "verifying the blockchain" — in other words, by solving complex mathematical equations and adding another "block" of transactions to the existing chain. With bitcoin, the process is known as "mining" because the verifier is rewarded with new bitcoins.

Ultimately, the key attribute of the technology is its ability to ensure and enshrine an often undervalued commodity: trust. The only way the protocol itself can be hacked and a false transaction entered is if a group of actors control more than 50 percent of the nodes verifying the blockchain in order to collude with one another.
To be quite clear, first-mover offerings such as bitcoin, Ethereum or Ripple that are popular today might easily die a quick death tomorrow. For now, the technology remains in its infancy and new applications are still being developed. There are a number of technological challenges to be surmounted as well as regulatory hurdles to overcome before potential sectors of the economy adopt this technology — or not, as the case may be.