There are growing indications that Iran, Syria and their local proxies may be attempting to build up militant capabilities in the West Bank to eventually threaten Israel. Physically transferring weapons into Fatah-controlled West Bank will remain a key challenge, as recent arrests of weapons smugglers in Jordan have shown. Though Iran and Syria face many constraints in trying to spread militancy to the West Bank, their quiet efforts are worth noting, particularly as Hamas and Iran are now finding reasons to repair their relationship after a period of strain.

In the past several days, Jordanian authorities have reported two separate incidents in which groups of smugglers traveling from Syria have been caught with weapons and drugs in Jordan. A Jordanian security official speaking anonymously to local media said that five Syrian smugglers were caught the morning of Aug. 6 with anti-tank missiles, surface-to-air missiles and assault rifles in their possession. According to a Stratfor source, the arrests were made near Madaba in central Jordan. The smugglers, carrying Jordanian identity cards, allegedly hid the weapons in two pickup trucks loaded with watermelons, but when the two trucks traveled beyond the main produce market and kept heading south, the Jordanian police became suspicious. Jordan's state-owned Petra news agency said the army had thwarted another attempt to smuggle a large amount of drugs and weapons from Syria into Jordan earlier in the week.

Jordan is the primary supply route for weapons (mostly from Arab Gulf suppliers) meant for rebels in southern Syria. Therefore, weapons traveling the opposite direction — from Syria into Jordan — stand out. Jordan is already on high alert for attacks, given its own history with jihadist activity and the proliferation of jihadists in neighboring Syria. Moreover, Jordan's attempt to balance between supporting the rebels and maintaining a relationship with the Syrian Alawite regime could make the country vulnerable to attacks by militants on either side of the conflict. Jordanian authorities have thus tried to reinforce security on the Syrian-Jordanian border and have tightly restricted the movement of Syrian refugees in the north around the Al Zaatari camp, where militants could try to blend in with thousands of refugees. 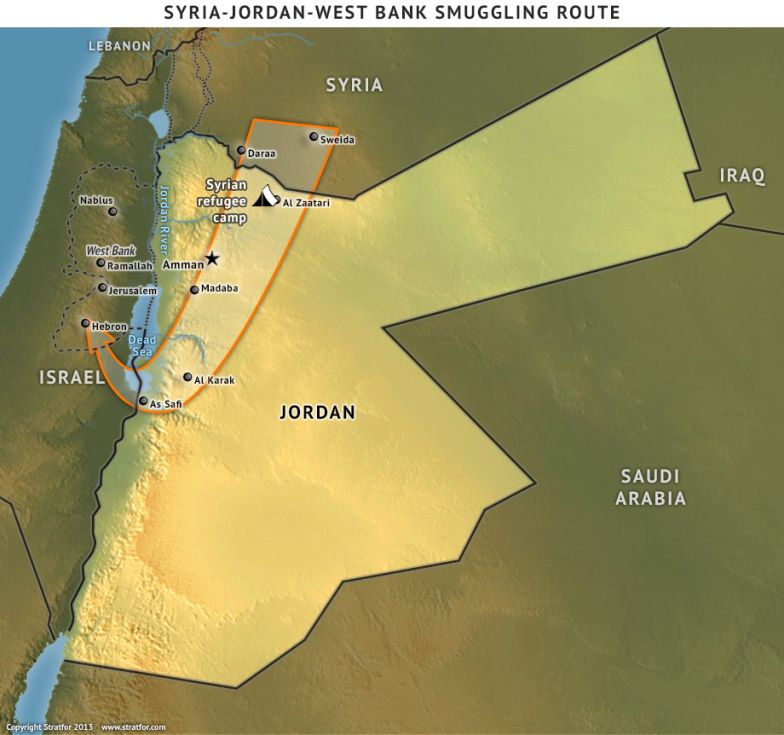 However, Stratfor's own investigation into the latest weapons shipment traveling through Jordan reveals a different target altogether. Contacts in the area claim that the smugglers caught Aug. 6 were Palestinians from Syria who were affiliated with the Popular Front for the Liberation of Palestine-General Command. The suspects allegedly were carrying weapons obtained from Syrian army warehouses in Sweida in southwest Syria. The weapons were to be transported through Jordan, from the Syrian border southward to Al Karak, to circumvent the large security presence around the Jordan River Valley. The final destination of these weapons, according to the contacts, was intended to be Hebron in the Fatah-run West Bank.

The smuggling operations fit with a pattern that Stratfor identified in November 2012, when Palestinian contacts in the region reported that Iran was working with Palestinian groups to try to transport munitions through Iraq and Jordan to the West Bank. To achieve this, Iran would likely work through Syrian intelligence and local Palestinian proxies. The Popular Front for the Liberation of Palestine-General Command, the group the smugglers were allegedly affiliated with, has had a close working relationship with Syrian intelligence, and it is plausible that members would have been commissioned to transport the weapons from Syrian warehouses to the West Bank. Though the secular, left-leaning Popular Front for the Liberation of Palestine-General Command is at ideological odds with Islamist Hamas, those ideological lines can be blurred in such operations, especially when they are undertaken at the behest of the groups' Syrian patrons. Hamas has a limited presence in the West Bank, but it does enjoy support in some of the surrounding villages in the Hebron Hills, where the weapons were likely to be stored.

Iran and Syria's Plans for the West Bank

Both Iran and Syria would like to build up an additional source of militant leverage against Israel. The Iranian regime grew concerned with the rise of the Muslim Brotherhood in the region that led Hamas to distance itself from the Iran-Syria axis. When the Muslim Brotherhood came to power in Egypt, and when Syrian Islamists were making gains in their rebellion against the al Assad regime, Hamas calculated that in this sectarian environment it was better to align with its ideological allies than to risk alienating itself by maintaining a close relationship with the Syrian and Iranian regimes. As sectarian tensions grew over the Syrian battle of Qusair in the spring, reports began emerging that some Hamas fighters had joined Sunni rebels in Syria against the regime. At that point, Iran had to worry about its leverage weakening among Palestinian proxies in Gaza, Syria and Lebanon, all while Iran's main ally Hezbollah was heavily preoccupied with trying to hold its ground in Lebanon while fighting Sunni rebels in Syria.

But Iran also sought ways to maintain its leverage among the Palestinians. Even as Hamas tried to publicly distance itself from Tehran, it was Iran's supply of long-range Fajr-5 rockets to Hamas that nearly led to an Israeli invasion of Gaza at the end of 2012 and exposed a still robust relationship between the ideologically opposed allies. With Egypt's Muslim Brotherhood politically sidelined, the Egyptian military bearing down on Hamas in the Sinai Peninsula and cutting off the group's supply lines and Syria's Sunni rebels in a stalemate with the regime, Hamas is likely to find even more reason to remain close to Tehran. Iran, meanwhile, is trying to compensate for the sectarian challenges confronting its allies in Syria, Lebanon and Iraq by widening its militant proxy network wherever it can. Part of this strategy involves building up a presence in the West Bank to threaten Israel. This strategy also falls in line with Hamas' interest in undermining Fatah, especially as the Fatah-led Palestinian National Authority engages in more peace negotiations with Israel that fail to acknowledge Hamas' authority in the Gaza Strip.

Challenges to Iran and Syria's Plans

Physically operating in the West Bank is not easy, though. Fatah is the dominant party in the West Bank and controls local security forces, who frequently arrest Hamas members. The Fatah leadership will continue endeavoring to prevent Hamas from making serious inroads in the West Bank that could end up further threatening Fatah's credibility. Moreover, Jordan's increased security presence on the border with Syria, Israeli-Fatah security collaboration and Israel's heavy security presence around the Jordan River Valley also make any route through Jordan highly susceptible to detection, as the recent arrests in Jordan indicate.

These challenges have not deterred Iran and Syria from trying to use their local networks to build up weapon caches in the West Bank so that eventually Palestinian militant factions can try to ambush Israel Defense Forces patrols. The inclusion of anti-tank weapons and man-portable air-defense systems in these weapons shipments to the West Bank would be particularly alarming to Israel. The threat has not yet materialized, but these efforts bear watching closely.