Filters at the Ashkelon seawater reverse osmosis plant south of Tel Aviv in 2008.

Israel's successful efforts to increase water security will lessen one of the country's geographical constraints. But new sources of water are more energy intensive, and this could increase Israel's short-term dependence on energy imports unless domestic energy sources are successfully developed.

While Israel enjoys relative national security compared to its neighbors, which are struggling with internal fragmentation, this will probably change eventually. Because concerted military efforts have been required in the past to secure water resources, Israel has had a strong incentive to develop technological solutions to improve water security. Additional domestic water resources — including increasing desalination capacity and continued efforts to recycle water — allow Israel to mitigate one of its inherent geographic constraints.

Israel has substantially increased its capacity to desalinize water over the last decade. The arid country of roughly 8 million already has a number of desalination plants — including the Sorek plant, the world's largest desalination plant of its kind, which became fully operational in October. Israel has plans to increase total desalination capacity through 2020 such that it approaches the estimated annual amount of internally generated natural water resources.

For groundwater, Israel relies on two main aquifers: the Coastal Aquifer and the Mountain Aquifer (which is further divided into subaquifers). Both also lie under the Palestinian territory — in Gaza and the West Bank, respectively. 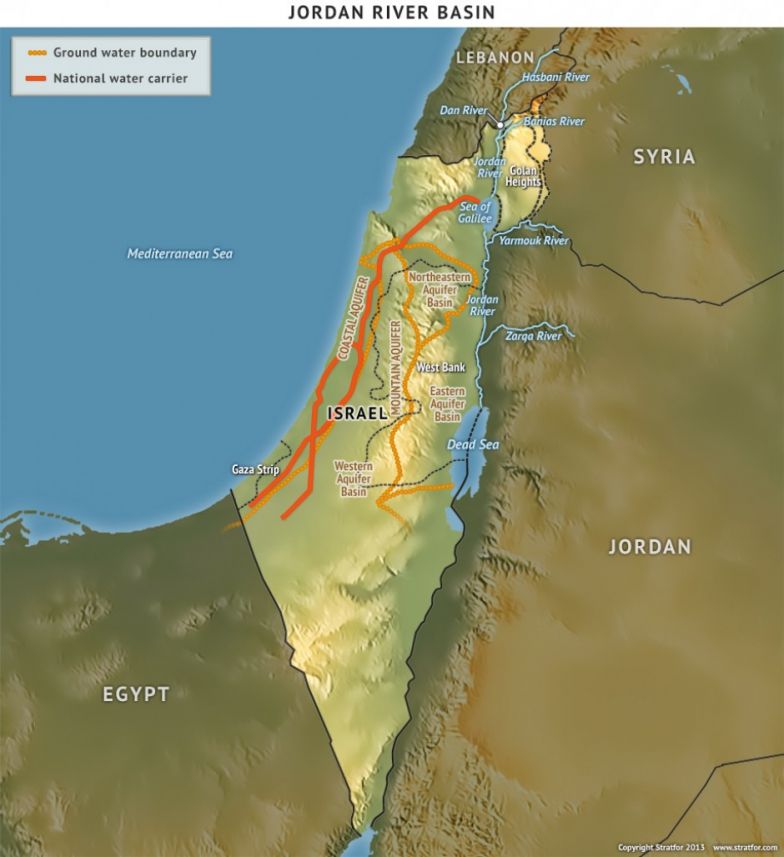 Israel's surface water is concentrated mainly in the north and east of the country. Israel is part of the Jordan River system, which also includes Syria, Lebanon, Jordan and the West Bank. The major rivers in the upper part of the basin include the Hasbani, Banias and the Dan rivers. These rivers converge to form the Jordan River near the border of Israel, Lebanon and Syria before flowing into the Sea of Galilee. Downstream, the Jordan River is further fed by the major tributaries of the Yarmouk and Zarqa rivers.

Allocations of water from transboundary river systems are often disputed. The last basin-wide allocation scheme for the Jordan River system came in 1955 with the Jordan Valley Unified Water Plan (also known as the Johnston Plan, named after the American ambassador involved in negotiations). By allocating water based primarily on agricultural demand, the plan offered a compromise between participating nations. However, because many of the Arab states did not want to recognize Israel, the plan was never ratified. Attitudes toward cooperative distribution strategies continued to sour during the construction of Israel's National Water Carrier, which diverted water from the Sea of Galilee to other points in Israel. However, Jordan and Israel have used the Unified Plan as the basis for subsequent negotiations.

As one of the downstream riparian nations in the basin, protecting Israel's northern borders is essential to maintaining control of surface water resources. Maintaining control of the Golan Heights not only gives Israel a military advantage in dealing with adversaries to the north, it also helps to guarantee access to the Sea of Galilee.

Israel historically has demonstrated a willingness to use military force to guarantee access to water resources. In 1964, Syria, with the support of the Arab League, began devising plans to divert the Banias River, threatening roughly 10 percent of Israel's water supply at the time. From 1965-1967, Israel launched attacks to destroy the diversion projects under construction in an effort to maintain access to the water source.

Water rights and distribution parameters were included in the 1994 peace treaty between Israel and Jordan. The Oslo II agreement in 1995 between Israel and the Palestinian National Authority also outlined parameters for water cooperation in the West Bank, but in practice, joint management has often failed and the Palestinian population remains heavily dependent on Israel for access to water.

These treaties also did not remove Israel's imperative to ensure continued access to water resources, nor its willingness to threaten military action to ensure it. In 2002, villages in southern Lebanon installed small pumping stations and irrigation pipelines on the Hasbani River. Ariel Sharon, Israeli prime minister at the time, claimed these actions constituted a "case for war" and threated military action. While no action was taken, the posturing illustrates Israel's wariness of upstream water management schemes.

The foundations of Israel's current water infrastructure system were laid in the 1950s and 1960s, when Israel faced a more volatile security situation. Subsequent decades saw further development of the efficient use of water and the development of alternative sources. As a result, Israel has expanded internal water resources without expanding its physical borders, helping mitigate the risk of international confrontations over water.

To the same end, Israel has also developed a highly organized water management system, effectively integrating the whole country. An early project known as the National Water Carrier, which comprises a series of canals, pipelines and pumping stations, moves water from the Sea of Galilee in the comparatively water-rich north to areas of higher demand and greater need in the central and southern zones.

Israel is also a pioneer and global leader in water-efficient irrigation technology. Because agriculture remains the largest water consumer in the country, efficient use in this sector is necessary for continued sustainable water management. In addition to the irrigation technology, by effectively treating roughly 400 million cubic meters of wastewater, using it mostly to irrigate crops, Israel further reduces pressure on water resources.

Although Israel has used desalination technology on a smaller scale since the 1960s, the push for a substantial increase in desalination capacity began only after a major drought in 1998-1999. Several droughts over the course of the last 15 years drove home the vulnerability of Israel's water supply. Meanwhile, the overuse of groundwater resources, especially of the Coastal Aquifer, is degrading the quality of the water.

Israel currently consumes just under 2 billion cubic meters of water per year, and while water management has the ability to improve the efficiency of water usage, increasing populations in the region will continue to pressure these limited resources. These factors combined have pushed Israel toward desalination.

Because Israel has traditionally been an energy importer, increasing reliance on an energy-intensive water resource could in turn increase Israel's dependence on energy-exporting nations. Natural gas will likely be the predominant fuel used to produce desalinated water. The Israeli electrical grid is projected to shift further toward natural gas and away from coal in the coming years, while the desalination plants often independently employ natural gas generators.

The total fuel required will vary based both on the type of desalination plant, as well as the type of power generation. Even with newer, more efficient equipment, the operation of more than 500 million cubic meters of desalination capacity could require more than 100 million cubic meters of natural gas or the equivalent energy from some other fuel sources to produce the additional power necessary to run the plants.

Israel had previously been an importer of natural gas, but the total volume of imports has declined in recent years. As of August 2013, imports were only accounting for 13 percent of total consumption. Furthermore, offshore discoveries in the eastern Mediterranean, including the Leviathan fields projected to come online as early as 2016, mean Israel has the potential to become a natural gas exporter. While there are many political and technical constraints surrounding the development and subsequent use of these fields, increased levels of domestic energy production could reduce dependence on foreign partners in terms of energy. This is especially important as Israel pursues a strategy of relying on more energy-intensive water resources.

Israel traditionally requires a third-party sponsor to survive. And even with the added desalination capacity, Israel may still need to use water from external sources. But it has successfully adjusted to the environment and better insulated itself from its neighbors, complementing an established military superiority. And this could provide additional maneuverability in future negotiations.

Israel is momentarily in a secure strategic position. Syria will likely remain in a state of civil war for an extended period, and Lebanon remains fragile and fragmented. Israel maintains a working relationship with other neighbors, such as the Hashemite regime in Jordan, as well as Fatah and the Palestinian National Authority and the Egyptian military. This status quo seems unlikely to change in the short term. But although Israel is in a relatively stable position, it knows how mercurial the surrounding region is and will likely still behave proactively around national security issues.

Israel's proactive solution to ensuring water security is to develop additional domestic resources. Though this will require more imported energy in the short term, the continued development of domestic energy resources could act as a counter-balance, even as water resources become more energy-intensive.