Learning From the Other Twin Towers Attack

Editor's Note: Today, on the 15th anniversary of the attack that brought down the World Trade Center, Stratfor remembers all who lost their lives and acknowledges those whose lives were forever changed on Sept. 11, 2001 — including the people working diligently to ensure that the United States never has to endure another tragedy of the same magnitude. In fact, their preventive work started some eight years before 9/11 after a bombing at the towers killed six people and injured more than 1,000 others. Stratfor Chief Security Officer Fred Burton reflects on his work with the State Department in the wake of that first attack.

On Feb. 26, 1993, a massive explosion rocked the World Trade Center, killing six people and injuring more than 1,000 others. Terrified schoolchildren were trapped in smoke-filled elevators for hours before rescuers could finally reach them. Following the bombing, law enforcement officials gathered evidence that led to the indictments and arrests of several suspected terrorists, including the plot's mastermind, Abdul Basit, better known by his alias, Ramzi Yousef. He was added to the FBI's Ten Most Wanted Fugitives list, and our office at the State Department offered a $2 million reward for his capture.

Yousef had been associated with al Qaeda leader Osama bin Laden since before the terrorist organization had even been founded. He left the Khaldan training camp run by bin Laden in September 1992 and traveled to New York, where he made contact with the al-Kifah Refugee Center — so infamous for its ties to terrorism that it was often called the Brooklyn Jihad Office. From that base of support, Yousef formed the terrorist cell that would eventually bomb the World Trade Center. An attack on the towers, which were a powerful symbol of U.S. economic power and Jewish wealth, would make a strong media statement to the world.

But the improvised explosive device placed in the parking garage of the north tower failed to destroy the two towers. What it did do, however, was raise awareness of domestic terrorist threats among U.S. security officials. The investigation of the incident uncovered many other plots, including one to assassinate then-Egyptian President Hosni Mubarak at the Waldorf-Astoria hotel in New York.

Because of the work that began in 1993 and continued after 9/11, a plan like Yousef's would be nearly impossible to execute today. Close cooperation among law enforcement at all levels — especially the FBI's Joint Terrorism Task Force — and local Muslim communities has led to the identification and weeding out of Muslim leaders with radical views, resulting in either their deportation or close surveillance.

For me and many of my colleagues, the gritty task of combating terrorism in the United States became our lives. At the time of the 1993 attack, Scott Stewart, my colleague here at Stratfor, was a special agent with the U.S. Diplomatic Security Services (DSS). Scott left our office in Washington with a sophisticated explosives detector that he used at the World Trade Center to help the FBI, the Bureau of Alcohol, Tobacco, Firearms and Explosives and the New York City Police Department investigate the scene of the bombing. He subsequently worked on countless document fraud cases connected with many of the bombing's suspects, including with Omar Abdel Rahman, better known as the Blind Sheikh. Scott's work was persistent and tireless. 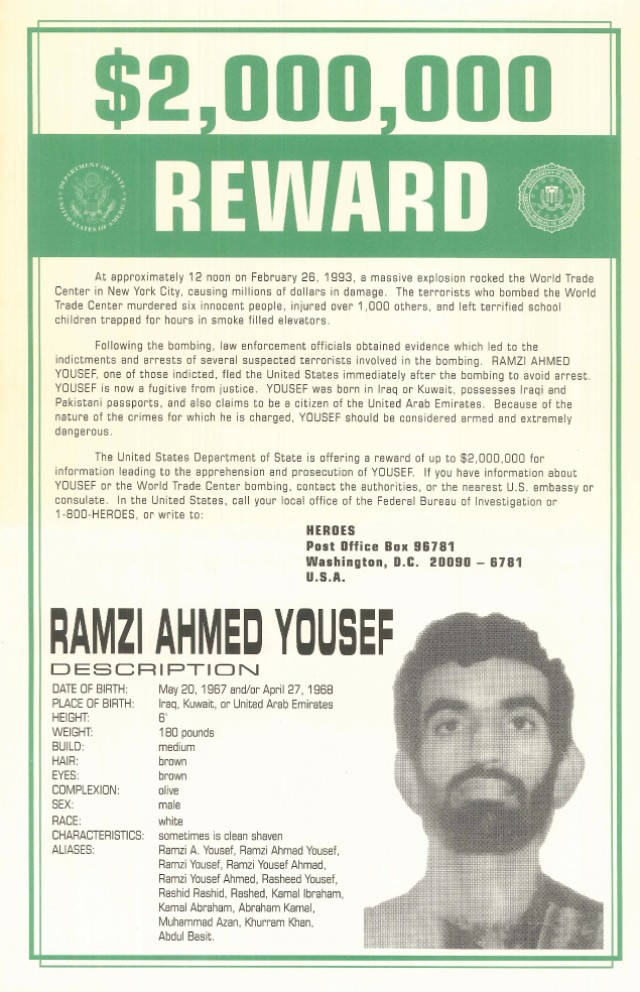 While Scott chased down the criminal rings that helped facilitate the attack, I worked to capture the suspects still at large. As I narrated in my memoir, Ghost: Confessions of a Counterterrorism Agent, I was directly involved in Yousef's capture in 1995, but I've always said that I received much more credit then I deserve for my role in that capture. Yousef's arrest was really due to the establishment of the Rewards for Justice program, which doled out cash for information leading to arrests. Yousef's capture was a testament to the strength of that program and to the heroism of the agents who made the arrest, more than to a sign of any great competency on my part.

After receiving a tip from a very good informant, DSS special agents nabbed Yousef in a hotel room in Islamabad, Pakistan. Afterward, the informant was relocated to the United States for his safety and was granted his reward in crisp hundred-dollar bills stacked neatly inside a black General Services Administration-issued Samsonite briefcase. The man who risked his life to help bring Yousef to justice was also required to sign a form obliging him to pay taxes on his windfall — though there was no oversight to make sure he complied.

Paying informants large cash rewards became standard practice for special agents with the Counterterrorism Division of the DSS. Another of my Stratfor colleagues, Mike Parks, played a critical role in the Rewards for Justice program. To help advertise its existence, we designed matchbooks with pictures of notorious terrorists and eye-catching wanted posters (an original Ramzi Yousef matchbook and poster are among my most prized possessions). We organized public service announcements by Hollywood celebrities and formed a public-private partnership to help fund reward offers.

Yet our best efforts were not enough to prevent the attack eight years later that destroyed the twin towers and thousands of lives. Today, as I remember the victims and heroes who died in that savage attack, I also remember those affected by the first tower bombing. I commemorate all of the painstaking and often tedious work my colleagues did to prevent another bombing. I'm cognizant of and grateful for their efforts, sure that though we couldn't guarantee the complete and enduring safety of every American, we undoubtedly made our country and all of our lives more secure. Today, I rest more easily knowing that the 9/11 attack would be virtually impossible to replicate in today's United States.