Editor's note: This is the first installment of a five-part series authored by ETM Analytics, an economic and financial advisory firm with offices in the United States and South Africa. The analysis contained herein reflects the views of ETM and not of Stratfor. In fact, as you will see, it is different from our existing worldview in some significant ways. We are sharing this with our readers because it is good work, produced using rigorous analytic tools and methodology. As always, we look forward to receiving comments and feedback. At the end of the series, we will share what we hear from you along with Stratfor's thoughts on how our view differs from ETM's.

So much has been said about the wealth and power of the United States that to say anything more would be to peddle a cliché, one that has shrouded the U.S. economy in an aura of infallibility.

It makes sense that this would be the case. The United States helms the global economy and has done so with varying degrees of intensity since World War II, when a new international economic system was established at Bretton Woods. Though Washington was not the only architect of that system, it was its chief steward and its biggest beneficiary. And as prosperous as it grew under that system, the United States was enriched further still once the system ended.

But the aura of American economic infallibility has since faded, thanks in part to the economic failures brought to light in the 2008 financial crisis. Instead of correcting those failures, Washington doubled down on the policies that created the crash in the first place, incurring far more debt than it previously had and printing money at unprecedented levels. If this grand gamble fails to pay off, the global financial system could undergo a profound and unstable transition.

In the ruins of World War II stood the United States, the only country capable of controlling the levers of international finance. Washington owed its newfound pre-eminence in part to the New Gold-Exchange Standard, one of the key byproducts of the Bretton Woods agreement. Under the agreement, national currencies would no longer be redeemable in gold to citizens; instead, only governments and their central banks could participate in gold redemptions, and then only with dollar reserves. Although gold loosely underpinned this system, its authors never meant for gold to return to its prewar primacy. Europe and Japan, strapped as they were with debt and in need of imports only a country as productive as the United States could provide, stored up their dollar reserves. The new system would establish trust in the dollar by piggybacking off existing confidence in gold.

Lesson 1: Establishing a global currency reserve requires a nation to be supremely productive; to be a creditor to other nations; and to build trust in (and establish the need for) its currency.

Bretton Woods was founded upon an implicit trust that the United States would honor its pledge to redeem gold at $35 per ounce and to be a productive lender. Emboldened by this faith, the U.S. economy expanded in size and reach, domestically and abroad, funded by a surfeit of dollars — more dollars, in fact, than the United States would have been able to amass simply by redeeming gold at the agreed rate. France referred to this disparity as America's "exorbitant privilege."

And it was France that eventually called the United States' bluff by redeeming its stockpiled dollars for gold. Several other countries quickly followed suit, and Bretton Woods began to fall apart almost immediately. It was not until U.S. President Richard Nixon abandoned the gold standard in 1971, however, that the system's disintegration was complete. The price of gold soared, and the 1970s became one of the most economically tumultuous decades of the 20th century.

Lesson 2: There is an inevitable tension surrounding the "exorbitant privilege" — the natural order resists it, and the countries that have it resist giving it away. That tension leads to periodic changes in the monetary order, changes that bring financial instability.

From Privilege to Petrodollars

The United States would actually become even more exorbitantly privileged in the 1980s than it was during the Bretton Woods years. In a peculiar incarnation of the dollar, oil, the most traded commodity on earth, would be priced in and exchanged for dollars exclusively. Major oil producers, with the consent of their de facto leader, Saudi Arabia, saved their dollar income in U.S. Treasury bonds. In return, the United States supplied the Arabian Peninsula with arms and military support. (Western Europe, for its part, acceded to the arrangement so long as the United States subsidized its Soviet containment strategy.) 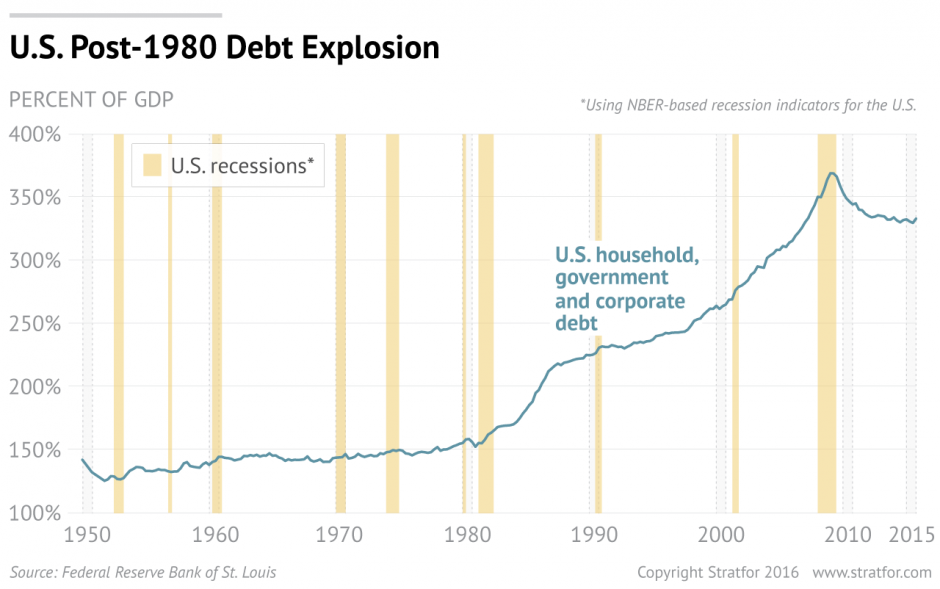 Unconstrained by the limitations of gold, buttressed by these new petrodollars, and increasingly assertive in the face of a declining Soviet Union, the United States grew its economy through debt. Washington became a dollar factory, producing its currency en masse to buy goods and services throughout the world. Its citizens purchased a high standard of living, while the citizens of other countries purchased future claims to that standard of living — an imbalance that would eventually have to right itself. 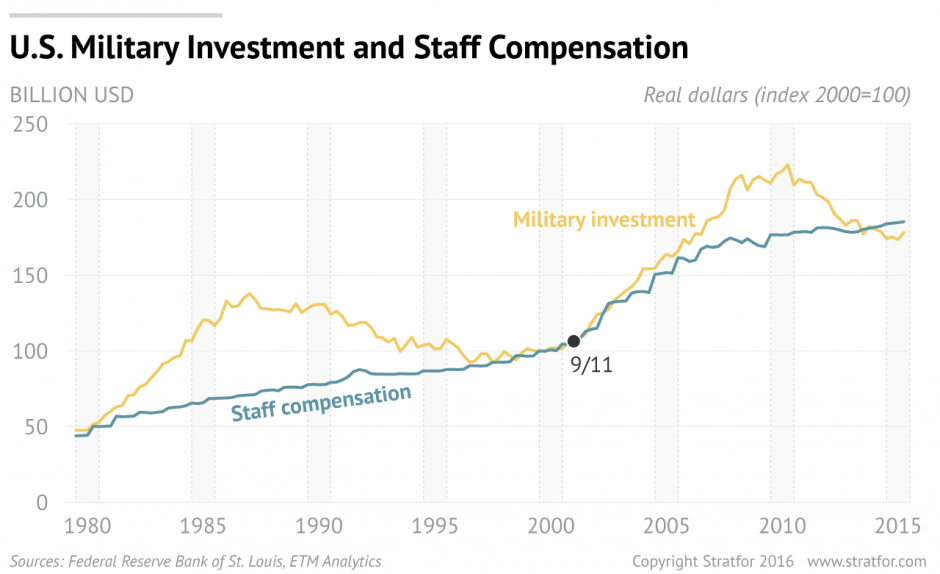 Lesson 3: States will do all they can to maintain their exorbitant privilege, even if keeping it facilitates the build-up of unhealthy and unsustainable global economic imbalances.

The End of American Infallibility

To be so privileged required absolute hegemonic power, stable state finances and a dependable financial and monetary system, things the United States had in droves. But things began to change at the turn of the 21st century. The Nasdaq crashed in 2000-2002. Jihadists attacked U.S. soil on 9/11. The Federal Reserve slashed interest rates to 1 percent. These transformative events ushered in an era of fiscal and monetary activism by Washington meant to repair household balance sheets, to fuel another credit cycle and to fund a growing military budget. The budget deficit was increased significantly and the Fed made sure it provided ample liquidity to the financial system in what would be a precursor to its more aggressive quantitative easing programs in 2008. The United States, in effect, doubled down on its debt-based model of growth, and its financial system capitulated in 2008.

The financial calamity of 2008 drew out a far more audacious, even experimental, fiscal and monetary activism — America's grand gamble. Though it is too early to know for certain if the gamble paid off, current signs bode ill for the prospects of recovery. (If past cycles are a guide, throwing more debt and money at the problem could make the entire system even more fragile.) In fact, the global economy has been in a business cycle downturn since the United States tapered quantitative easing in late 2013. As early as 2014, several emerging markets saw sharp capital outflows. Turkey, as a result, raised interest rates by a staggering 4 percent in one day to prevent a currency crisis. The increase itself was not the end of the world, of course, but it was one of several "mini-crises" — among them, the oil price crash, the Swiss franc de-link from the euro, the fear of deflation, negative interest rates, the Grexit saga, China's stock market crash and Wall Street's choppiness — that could grow into something much more systemically problematic. 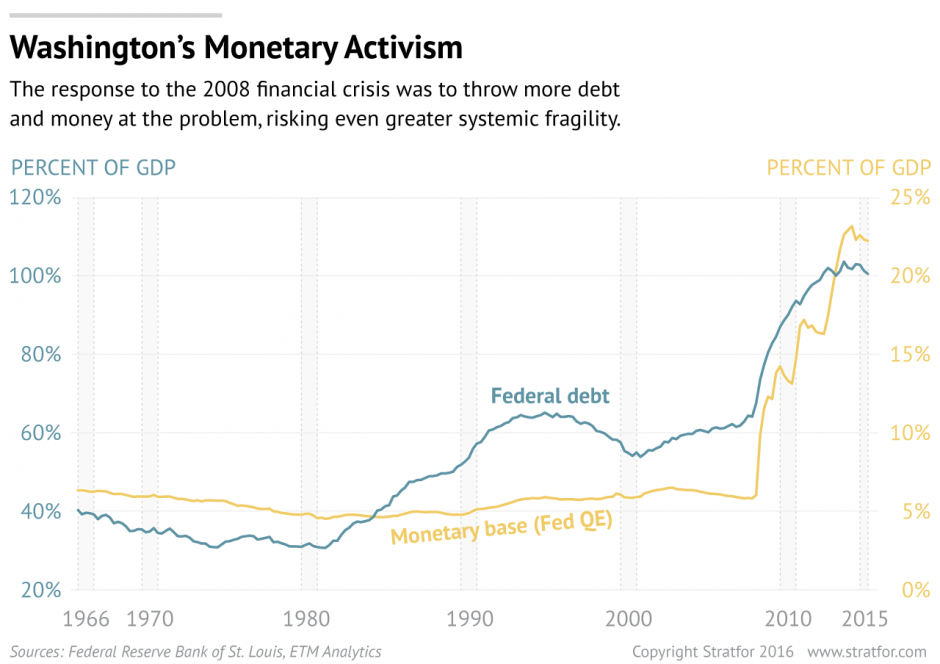 Quantitative easing, moreover, may have stabilized things for a spell, but volatility returned as soon as the policy ended. A dollar bull market, which began in 2014, fed into U.S. corporate earnings risks and caused deleveraging in dollar carry trade positions, exacerbating global financial illiquidity.

What has transpired since January 2014 shows the danger of treating the symptoms, but not the disease, of economic distress. Yes, quantitative easing liquefied and pre-emptively bailed out banks. And yes, the dollar bull market and low Treasury bond yields attest to the "success" of Washington's policy experiment. But perhaps these judgments are premature. Quantitative easing also incubated new risks and new kinds of fragility not yet fully understood. And with an enormous balance sheet and near-zero interest rates, the Fed has yet to prove that its recovery will last.

Still, from 2009 to 2015, markets behaved as though the grand gamble worked. But what if that assumption is wrong? What if U.S. exceptionalism is as imperiled now — amid the hangover of a debt super cycle, in the throes of mounting cyclical risks, in the ruins of the Fed's credibility — as it was in 2000 and in 2008? If the Fed cannot fix the problem, is it because the problem was misdiagnosed? And if it was, has the Fed's remedy actually made things worse? Already market pricing has begun to suggest that it has.

The foundation of the dollar's dominance has crumbled, as has the belief that the United States is economically infallible. The harder America fights to retain its exorbitant privilege, the more it uses the full extent of its power by doubling down on a debt-based growth model and using fiscal and monetary treatments instead of necessary but painful structural reforms. Lesser global powers are increasingly unwilling to allow Washington to leverage its exorbitant privilege if it is unprepared or unable to pay for it with hegemonic dominance, stable state finances, and financial and monetary dependability.

Washington may believe the gamble it has made will instill confidence in the global financial order. But running up more national debt and printing money hand over fist is, in fact, a sign of weakness. Not only does it indict the gamble itself, but it also sets the monetary system on a path of profound transition and with it a prolonged phase of financial instability. Implementing genuine reform would place America's long-term future, not to mention the dollar's reserve status, on a firmer footing, but that could create even more turmoil in the near term, leaving policymakers with fewer choices and more uncertainty. That uncertainty is precisely the subject of the forthcoming installments of this series.