Editor's Note: The recent drop in global oil prices is affecting economies around the world. This series examines the reasons behind the falling prices and their effects on major energy consumers and producers. Part One discusses the structural changes in the oil market, particularly the growth in supply and the decline in demand. Part Two will examine the countries likely to be most troubled by price drops, while Part Three will look at the countries likely to gain the most.

Since mid-June, the price of Brent crude oil has fallen by nearly 25 percent — going from a high of $115 to about $87 a barrel — and structural factors are causing concern among global oil producers that oil prices will remain near current levels through at least the end of 2015. This concern has caused several investment banks to slash their oil price outlooks for the immediate future. Stratfor believes that oil supplies will stay high as energy production in North America increases and OPEC countries remain hesitant or unable to cut production significantly. Moreover, in the short term, the Chinese economic slowdown and stagnant European economy will limit the potential for growth in oil demand. These factors could make it harder for global oil prices to rebound to their previous levels.

Oil is the most geopolitically important commodity, and any structural change in oil markets will reverberate throughout the world, creating clear-cut winners and losers. Countries that consume large amounts of energy have been coping with oil prices above $100 per barrel since the beginning of 2011 as most of the developed world has been trying to emerge from financial and debt crises. A sustained period of lower oil prices could provide some relief to these countries. Major oil producers, on the other hand, have grown accustomed to high oil prices, often using them to underpin their national budgets. Sustained low oil prices will cause these oil producers to rethink their spending.

The amount of oil production that has come online over the last four months is staggering. The United States has increased its production from 8.5 million barrels per day (bpd) in July to an estimated 9 million bpd. Libyan oil production has increased from about 200,000 bpd to more than 900,000 bpd. Saudi Arabia, Nigeria and Iraq have all increased production in recent months, and OPEC's production is at the highest level in two years. To put this into perspective, the International Energy Agency's projection for global oil demand growth for 2014 is only 700,000 bpd — roughly half of the total production increase mentioned above. 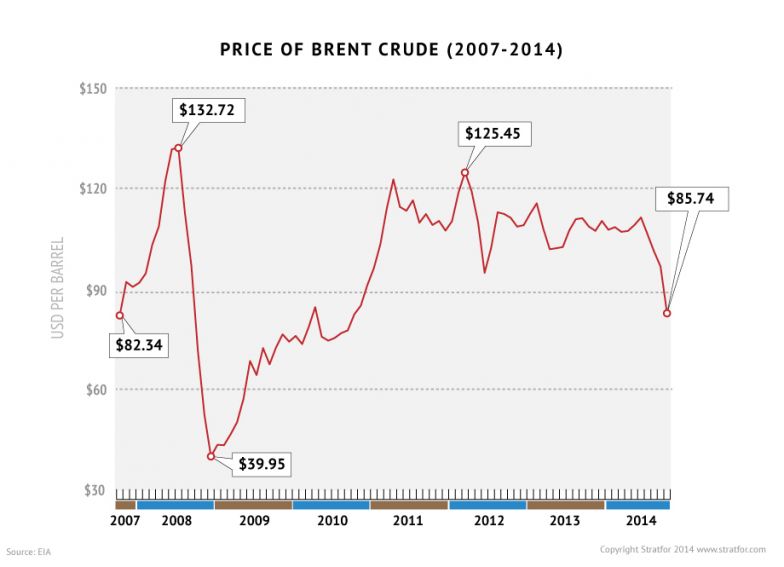 Looking to 2015, the growth prospects for energy production in North America continue to be positive. Even after production grew by about 1 million bpd in 2012, 2013 and again in 2014, the U.S. Energy Information Administration expects U.S. oil production to increase by another 750,000 bpd in 2015. Moreover, the Energy Information Administration consistently has underestimated production growth from tight oil (oil extracted from formations that are not naturally very permeable).

The only OPEC members with enough flexibility to reduce oil production voluntarily are the United Arab Emirates, Kuwait and Saudi Arabia. None of the other members are in a financial position to take oil production offline. Libya, Algeria, Iraq, Iran, Nigeria and Venezuela all need maximum oil output and high prices to finance their budgets and social spending programs. Notably, Libya's OPEC governor called on the bloc to cut production by 500,000 bpd to buoy prices but made no mention that his country would take part in such a cut. Saudi Arabia, meanwhile, seems to have taken the opposite position, prioritizing a greater market share over higher prices.

Saudi Arabia's status as OPEC's swing producer has historically meant that Saudi Aramco will reduce production to create higher oil prices. But with U.S. production increasing so quickly and prices that are still relatively high, Riyadh has little interest to do so: A significant reduction in oil production might not increase the price of oil enough to make forgoing the additional exports worthwhile. Riyadh found itself in the same position in the 1980s when it cut production only to discover that its control over international oil prices was limited. The Saudis have been hesitant to play the same card ever since, instead exerting a small influence on prices while continuing to produce at high levels. More broadly, during the last four decades the Saudis — as well as the Emiratis and Kuwaitis — have amassed large wealth funds, enabling them to simply sit back and weather a period of low oil prices.

This means that if oil prices continue dropping, it will fall largely to U.S. producers to slow production expansion. North America's tight oil production costs vary considerably from basin to basin, but so long as oil prices do not continue falling — and they appear to have bottomed out in the mid-$80 per barrel range — almost all tight oil production will remain profitable, and drilling will continue to increase. The U.S. oil rig count, a rough indicator of impending oil production, remains near record levels, indicating that the recent downturn in oil prices has not dampened interest in drilling.

In fact, in the short- to mid-term, production prospects outside North America will be rather bleak. Most of the recent production increases elsewhere around the globe were due to one-off events, such as the revival of Libya's production. There are only a few other changes — such as Iranian exports becoming unconstrained or Saudi Aramco dipping into its spare production capacity — that could put significant volumes of oil back on the market. In fact, it is more likely that large-scale production will go offline in places such as Nigeria and Libya. All of these possibilities limit the potential of a more drastic decline in oil prices.

Low Demand is Likely to Linger

On the demand side, a bullish oil market is unlikely. North American oil consumption is structurally in decline and has been since the mid 2000s. Electric vehicles, natural gas and other alternatives will continue to penetrate the North American oil market, albeit very slowly. The European oil market exhibits the same patterns seen in North America, but in Europe the structural decline is occurring amid slowing economic growth; many of Europe's more developed economies, such as that of France, are at effectively zero growth.

Meanwhile, China's economy will continue to descend from the peaks of its post-2008 investment and construction boom. The decline of housing markets and related industries nationwide is at the heart of China's economic slowdown and will in large part determine China's overall economic health during the next one to two years. Although a collapse in China's housing market in the next 12 to 18 months is not expected, should one occur, it would send China's economy into a tailspin and subsequently dampen demand for oil. However, Stratfor does not anticipate that Beijing would allow this to happen. The central government will likely enact more stimulus similar to previous economic measures, such as large-scale public infrastructure projects driven by state-led investment.

China's demand for oil could remain relatively strong in the absence of economic collapse, but China's increases in demand are likely to be more moderate than usual at an estimated 400,000 bpd over the course of the year. Increases in demand in the rest of the world combined will likely be no more than that figure. Meanwhile, global oil supplies do not appear likely to decline in the coming months. Therefore, there is every reason to believe that oil prices will stay lower than $100 per barrel for much of 2015, unless Saudi Arabia and OPEC change their minds about production cuts.

All eyes watching oil markets will turn to OPEC's semiannual meeting Nov. 27 to look for any shifts. If there are none, the lower price of oil will continue to have significant geopolitical consequences for consumer and producer countries alike.