Editor's Note: This Security Weekly assesses the most significant cartel-related developments of the first quarter of 2013 and provides updated profiles of Mexico's powerful criminal cartels, as well as a forecast for the rest of this year. It's the executive summary of a more detailed report available to clients of our Mexico Security Monitor service.

Since the late 1980s demise of the Guadalajara cartel, which controlled drug trade routes into the United States through most of Mexico, Mexican cartels have followed a trend of fracturing into more geographically compact, regional crime networks. This trend, which we are referring to as "Balkanization," has continued for more than two decades and has impacted all of the major cartel groups in Mexico. Indeed the Sinaloa Federation lost significant assets when the organizations run by Beltran Leyva and Ignacio Coronel split away from it. Los Zetas, currently the other most powerful cartel in Mexico, was formed when it split off from the Gulf cartel in 2010. Still these two organizations have fought hard to resist the trend of fracturing and have been able to grow despite being affected by it. This led to the polarized dynamic observed in 2011 when these two dominant Mexican cartels effectively split Mexican organized crime in two, with one group composed of Los Zetas and its allies and the other composed of the Sinaloa Federation and its allies. 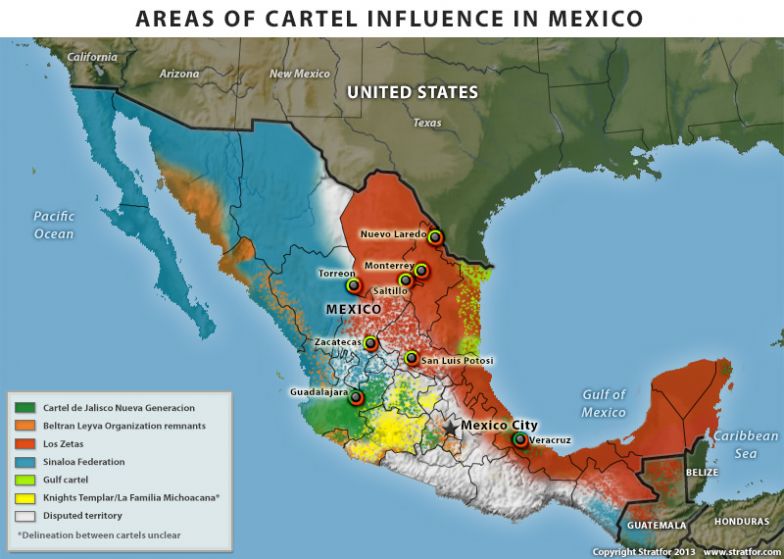 Areas of Cartel Influence in Mexico 2013

This trend toward polarization has since been reversed, however, as Balkanization has led to rising regional challenges to both organizations since 2012. Most notable among these is the split between the Cartel de Jalisco Nueva Generacion and the Sinaloa Federation. The Sinaloa Federation continues to struggle with regional crime groups for control in western Chihuahua state, northern Sinaloa state, Jalisco state and northern Sonora state. Similarly, Los Zetas saw several regional challengers in 2012. Two regional groups saw sharp increases in their operational capabilities during 2012 and through the first quarter of 2013. These were the Cartel de Jalisco Nueva Generacion and the Knights Templar.

The Beltran Leyva Organization provides another example of the regionalization of Mexican organized crime. It has become an umbrella of autonomous, and in some cases conflicting, groups. Many of the groups that emerged from it control specific geographic areas and fight among each other largely in isolation from the conflict between Los Zetas and the Sinaloa Federation. Many of these successor crime groups, such as the Independent Cartel of Acapulco, Los Rojos and Guerreros Unidos are currently fighting for their own geographic niches. As its name implies, the Independent Cartel of Acapulco mostly acts in Acapulco, while Los Rojos and Guerreros Unidos mostly act in Morelos state.

The ongoing fragmentation of Mexican cartels is not likely to reverse, at least not in the next few years. Despite this, while Los Zetas and the Sinaloa Federation continue to face new rivals and suffer from internal splintering, their resources are not necessarily declining. Neither criminal organization faces implosion or a substantial decline as a transnational criminal organization as a result of rising regional challengers. Both Los Zetas and the Sinaloa Federation continue to extend their drug trafficking operations on a transnational level, increasing both their influence and profits. Still, they will continue to face the new reality, in which they are forced to work with — or fight — regional groups.

In Hidalgo state, a former Zetas stronghold, the Knights Templar have made significant inroads, although violence has not risen to the level of that in the previously mentioned states. Also, the turf war within Nuevo Leon and Tamaulipas states between the Gulf cartel and Los Zetas that began when Los Zetas split from the Gulf cartel in 2010 continues.

In light of Ivan "El Taliban" Velazquez Caballero's dissent from Los Zetas and the death of former leader Heriberto "El Lazca" Lazcano Lazcano, Zetas leader Miguel "Z-40" Trevino Morales could face organizational integrity issues during 2013. Signs of such issues appeared in Cancun during the first quarter when some members of Los Zetas reportedly broke from the group and adopted the Gulf cartel name. Besides possible minor dissent, a seemingly new rival has emerged in Tabasco state to counter Los Zetas. A group called Pueblo Unido Contra la Delincuencia, Spanish for "People United Against Crime," carried out a series of executions in Tabasco state throughout the first quarter, but the group's origins and significance remain unclear. No indicators of substantial splintering among Los Zetas have emerged since the Velazquez split.

Regional organizations continued to challenge the Sinaloa Federation on its turf in western Chihuahua state, northern Sinaloa state and Jalisco state through the first quarter. Intercartel violence in mountainous western Chihuahua continues as the Sinaloa Federation fights La Linea for control of the region's smuggling routes and drug cultivation areas. Los Mazatlecos so far has maintained its control over northern Sinaloa cities, such as Los Mochis and Guasave. It also has continued violent incursions into southern areas of Sinaloa state, such as Mazatlan, Concordia and El Rosario with its ally Los Zetas.

At the beginning of 2012, Gulf cartel territory appeared likely to be absorbed by larger cartels — essentially signaling the end of the Gulf cartel. Support from the Sinaloa Federation and the Knights Templar combined with fractures within Los Zetas allowed a Gulf cartel resurgence, leading to a renewed Gulf assault on Los Zetas in the northeastern states of Mexico. The resurgence ended with a series of notable arrests during the last quarter of 2012, such as that of former top leader Jorge Eduardo "El Coss" Costilla Sanchez. The arrests triggered additional Gulf cartel infighting, which peaked in March 2013.

From March 10 to March 19, Reynosa became the focal point for Gulf cartel infighting as Ramirez Trevino escalated his conflict against Villarreal. Ramirez Trevino reportedly expelled Villarreal's faction and its allies from the Reynosa plaza and killed Salgado. This could mean Ramirez Trevino has consolidated control over other Gulf cartel factions. If true, this would represent a substantial shift in organized criminal operations in northeastern Tamaulipas state, where the Sinaloa Federation and the Knights Templar smuggle drugs, people and other illicit commodities through the border towns of Reynosa and Matamoros while Los Zetas maintain a constant interest in fighting for control of the stated cities.

As mentioned during the last annual update, Gulf cartel factions are increasingly reliant on Sinaloa Federation and Knights Templar support to defend the remaining Gulf cartel territory in Tamaulipas state from Los Zetas. This certainly remains true after the first quarter, although the recent shift from Gulf cartel infighting may signal a shift in intercartel dynamics. Since the Gulf cartel in reality consists of separate factions, there is likely a separate relationship between each Gulf cartel faction and the larger criminal organizations reportedly in alignment with them. With Ramirez Trevino now in charge of Reynosa, a city valued by both the Sinaloa Federation and the Knights Templar, his existing relationship with the two organizations will likely influence their strategies for maintaining their interests in Gulf cartel-controlled areas. Additionally, it is not yet clear whether Ramirez Trevino suffered any substantial losses during the March fighting in Reynosa. If he did lose some capabilities fighting Los Zetas in Tamaulipas state, or if he has challenged a faction loyal to either the Sinaloa Federation or the Knights Templar, either organization would likely have to use its own gunmen for defending Gulf cartel-controlled areas or mounting their own incursions into Zetas territory, particularly Nuevo Laredo.

Intercartel violence in the Gulf cartel-controlled city of Reynosa will likely diminish compared to the first quarter of 2013 if Ramirez Trevino has indeed won. This reduction in violence will continue only as long as Ramirez Trevino is able to hold his control over Reynosa. Influence from external organizations, such as Los Zetas, the Sinaloa Federation and the Knights Templar, could once again spark violence if Ramirez Trevino's efforts have harmed their trafficking operations through Reynosa or presented a new opportunity to seize control. What, if any, Gulf cartel infighting is ongoing is difficult to gauge.

Although evidence of the rift between the Cartel de Jalisco Nueva Generacion and the Sinaloa Federation began to appear in open-source reporting during the last half of 2012, the conflict between the two organizations only became clear when the Cartel de Jalisco Nueva Generacion went on the offensive in Jalisco state by attacking Sinaloa Federation allies Los Coroneles, the Knights Templar and the Gulf cartel.

In addition to the Knights Templar offensive into Jalisco state, the group is currently defending its stronghold of Michoacan state. The Cartel de Jalisco Nueva Generacion also has conducted violent assaults against the Knights Templar in Michoacan, particularly on routes leading from Jalisco state toward Apatzingan, Michoacan state. This assault has increased intercartel violence along the border of the two states as part of a tit-for-tat dynamic.

The Buenavista Tomatlan arrests occurred after the community police took over the municipal police station March 4 and detained the municipal police chief, who the Mexican military later freed. Notably, the Mexican government claimed at least 30 of the detained community police belonged to the Cartel de Jalisco Nueva Generacion. If true, this suggests it has made territorial gains to the point of infiltrating the community police. However, there has been no confirmation on whether the accusations are true. Regardless, the community police force of Buenavista Tomatlan has placed its focus on stopping Knights Templar operations in the area, a focus that could only benefit the Cartel de Jalisco Nueva Generacion's war with its rivals.