Since 2010, Central Asia has become increasingly volatile, a trend many have attributed to a rise in militant Islamism. Militancy has indeed risen since 2010, but the notion that militant Islamists primarily are responsible for Central Asia's volatility is shortsighted because it ignores other political and economic dynamics at play in the region.

But if these dynamics, not jihadist designs, inspired much of the region's recent militant activity, the impending U.S. withdrawal from Afghanistan in 2014 could put Central Asia at greater risk for militant Islamism in the future. Combined with upcoming leadership changes in several Central Asian states, the withdrawal could complicate an already complex militant landscape in the region.

Central Asia was an important region for Islamist militancy in the late 1990s and early 2000s. The region is predominantly Muslim, though like all religious practices, Islam was suppressed during the Soviet era. Given the region's secularization under Soviet rule, many religious groups and figures either went underground or practiced openly to the extent that the Soviets would allow. These groups and individuals were concentrated in the Fergana Valley, the demographic core of Central Asia that encompasses parts of Uzbekistan, Tajikistan and Kyrgyzstan. Islamists were particularly prevalent in Uzbekistan, which is home to several important religious and cultural cites in areas such as Samarkand and Bukhara. 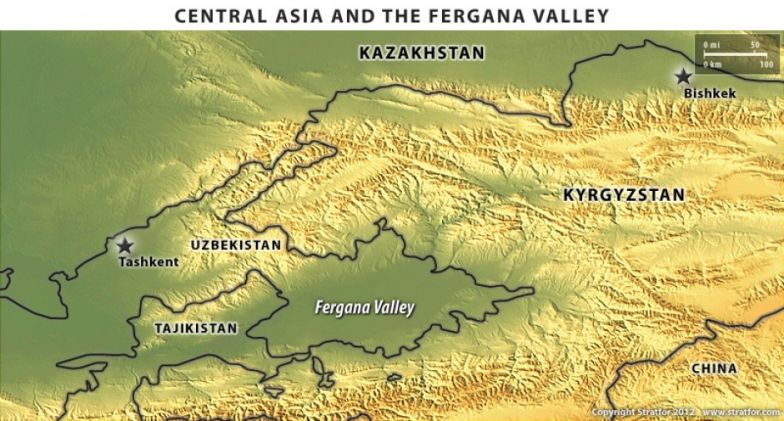 As Central Asian countries gained independence in the 1990s, religion began to be practiced more openly, and Islamist elements operating on the margins of society were freer to come out accordingly. This created a space in which the Islamist environment grew stronger, just as the ability of the new Central Asian regimes to control and suppress Islamist movements weakened. As a result, some Islamist groups began to call for a regional caliphate governed by Sharia.

Karimov clamped down on these groups in the early to mid-1990s, but the Islamic Movement of Uzbekistan gained refuge in Tajikistan, which was ravaged by civil war from 1992 to 1997. Because of the resultant power vacuum and its long, porous border with Afghanistan, Tajikistan became the primary base of operations for the Islamic Movement of Uzbekistan. In the late 1990s and early 2000s, the group conducted attacks from Tajikistan throughout the Fergana Valley and into southern Kyrgyzstan and Uzbekistan.

The 2001 U.S. invasion of Afghanistan, a country that provided both material and ideological support to Islamist groups in Central Asia from the ultra-conservative Taliban regime, effectively curtailed jihadist activity and ambitions in Central Asia. With the help of the U.S. military, including U.S. special operations forces, the Islamic Movement of Uzbekistan was largely driven out of Central Asia, finding refuge in the Afghanistan-Pakistan border area. For its part, Hizb al-Tahrir went underground.

The Central Asian regimes, especially Karimov's, were then able to crack down on the remaining Islamist militants. Attacks grew rarer throughout the next decade as militant Islamist groups struggled to survive in U.S.-occupied Afghanistan.

Militant attacks in the region became more frequent in June 2010, when clashes between ethnic Kyrgyz and Uzbeks broke out in Kyrgyzstan's southern Fergana Valley provinces of Osh and Jalal-Abad. As a result, Kyrgyz authorities conducted security sweeps through predominantly Uzbek neighborhoods under the pretense of rooting out suspected militant Islamists.

In reality, these sweeps most likely were directed at ethnic Uzbeks. Many ethnic Kyrgyz have long been suspicious of Kyrgyzstan's ethnic Uzbeks, which constitute a substantial portion of Osh's and Jalal-Abad's population. Thus, security sweeps targeting these areas and the resulting armed resistance to the sweeps do not necessarily fit neatly with the claims of religious extremism. Rather, militant activity could be related to the internal ethnic and political tensions between Kyrgyz and Uzbeks. Indeed, these tensions have surfaced periodically since the collapse of the Soviet Union.

A similar dynamic can be seen in Tajikistan. After the country's civil war, reconcilable Islamist militants, such as those of the Islamic Renaissance Party of Tajikistan, were incorporated into the government and security forces, while the Islamic Movement of Uzbekistan and other jihadist elements were suppressed. Violence peaked in the early 2000s, after which Tajikistan experienced nearly a decade of relative calm. However, a high-profile prison break in Dushanbe in August 2010 interrupted this calm. During the escape, about 24 prisoners deemed former Islamic Movement of Uzbekistan members fled to the Rasht Valley in eastern Tajikistan. This precipitated security sweeps in the Rasht Valley, which in turn led to attacks against Tajik military convoys — attacks that the Tajik government blamed on Islamist militants.

These militants were much more likely linked to opposition elements from the country's civil war rather than to jihadist militants. (That they fled to the east is telling; those from the eastern provinces of Garm and Gorno-Badakhshan opposed those who came to power in the western provinces of Leninabad and Kulyab.) The jailbreak could have prompted — or merely been a symptom of — the resurfacing of the political power struggle among Tajik clans, a struggle that was commonplace during the early years of independence. In itself, the jailbreak does not signify a jihadist resurgence.

Moreover, the ongoing military operations in Gorno-Badakhshan can be seen in a similar light. Security forces were deployed to the region after forces loyal to warlord and former opposition leader Tolib Ayombekov allegedly killed the region's top security officer. But Ayombekov likely did not kill the officer out of any religious motivation. Rather, it was Ayombekov's reported ties to the lucrative regional smuggling networks, as well as his resistance to the regime of Emomali Rakhmon, that led to operations and ultimately the death of the security officer. Like militancy in Kyrgyzstan, much of the militancy in Tajikistan probably is the result of political and ethnic rivalries, not religious extremism.

Kazakhstan likewise challenges the theory that Islamist militancy is proliferating in the region. Given its geographic separation from the Fergana Valley and a comparatively less religious society, Kazakhstan did not experience Islamist militancy in the 1990s and 2000s. However, in 2011 Kazakhstan began seeing militant attacks for the first time in its modern history. That the attacks were conducted with different tactics all across the country, including Almaty, Atyrau and Taraz, is particularly anomalous.

The Kazakh government blamed Islamist militants and religious propaganda reportedly circulating throughout the country. However, the timing of these attacks was curious because they came amid a growing political battle over the succession of the country's long-serving president, Nursultan Nazarbayev. It follows that these attacks could have been inspired less by Islamic radicalism, which has hardly been evident in Kazakhstan over the past 20 years, and more by the power struggle between various players seeking to position themselves for Nazarbayev's succession.

Notably, a jihadist group called the Soldiers of the Caliphate claimed responsibility for some of the attacks, including the October 2011 bombings in Atyrau. The claims suggest there is a genuine militant Islamist threat in Kazakhstan. However, the group was unknown until 2011, and there is little information on its members and leadership.

More recently, Uzbekistan and Turkmenistan have seen fewer attacks and reports of militant activity. This suggests that their respective internal situations are relatively stable and that their governments are secure enough to not have to use Islamic radicalism to justify their security crackdowns.

While this is probably true for Turkmenistan, the situation is less clear in Uzbekistan, which has been more stable than its neighbors in the Fergana Valley. However, Uzbekistan witnessed an explosion on a rail line near the Tajik border in November 2011. The government labeled the incident a terrorist attack. Since the blast occurred in a remote area with relatively little strategic significance, many speculated that the Uzbek government conducted the attack to halt traffic and goods into Tajikistan, with which Tashkent has had several disputes.

Meanwhile, Uzbekistan is undergoing its own succession struggle, which could result in instability. Indeed, recently there have been reports of protests in the Fergana Valley province of Andijan, the site of a security crackdown in 2005 that killed hundreds. In this instance again, the government blamed the Islamic Movement of Uzbekistan and Islamist militant elements. However, just as in Kyrgyzstan and Tajikistan, this was more likely the result of power struggles within the country.

As the dynamics and circumstances in most Central Asian countries suggest, oftentimes it is in the government's interest to refer to any militant activity as Islamist. Doing so suggests the activity of transnational rather than localized political elements and gives an excuse to crack down on those elements.

Of course, jihadist groups and elements exist in Central Asia, but most evidence suggests that the serious jihadist players have largely been eliminated, marginalized or pushed into the Afghanistan-Pakistan theater. However, the U.S. withdrawal from Afghanistan could provoke a jihadist resurgence in the region. The security vacuum created by the departure of U.S. and International Security Assistance Force personnel could also destabilize Afghanistan as various internal forces compete to fill the void.

Due to Central Asia's proximity to Afghanistan and the porous and poorly guarded border between Afghanistan and Tajikistan, there is certainly potential for violence and instability to spill over. Particularly worrying to Central Asian regimes are the Islamist militants in the Afghanistan-Pakistan border area that have survived and become battle-hardened in their war against Western forces. However, there have been reports that Islamic Movement of Uzbekistan leader Abu Usman Adil was killed Aug. 4 by a U.S. unmanned aerial vehicle strike in Pakistan, suggesting that the group may be struggling to survive even in the Afghanistan-Pakistan area.

The degree to which Islamist militant elements become active in Central Asia again will therefore depend on the U.S. withdrawal and the state of the Islamic Movement of Uzbekistan by that time. Until then, any developments on the militant front in the region need to be examined within the context of the internal power struggles and political dynamics of each country in addition to the Islamist angle. It is only in this context that the motivations behind militant actors and attacks in Central Asia can truly be determined and anticipated.

Understanding Economic Espionage: The Past