The Missile Arsenal at the Heart of the Israeli-Iranian Rivalry

Palestinians from the armed wing of the Hamas movement, display Qassam home-made rockets during an anti-Israel military parade in Rafah in the southern Gaza Strip, Aug. 21, 2016.

Following a string of recent successes, Syria's government is in a dominant position as the Syrian Civil War transitions to a new phase, while the two largest outside powers involved in the conflict – the United States and Russia – are beginning to look toward the exit as their primary foes lose ground. But even as the war appears to be winding down for some, it's beginning to ramp up for one key player: Israel. The increased Israeli activity in Syria stems from Israel’s priorities in the Levant, which differ greatly from those of the United States and Russia, as Israel views events in Syria and Lebanon primarily through the lens of its enmity with Iran. Tehran’s presence and influence in Syria has increased in parallel with the advances of its ally in Damascus, providing great cause for concern in Israel. And with foes like Iran and Hezbollah well-placed to...

Following a string of recent successes, Syria's government is in a dominant position as the Syrian civil war transitions to a new phase. Meanwhile, the two largest outside powers involved in the conflict — the United States and Russia — are looking to make an exit as their primary foes lose ground. But even as the war appears to be winding down for some, it's beginning to ramp up for one key player: Israel.

The increased Israeli activity in Syria stems from Israel's priorities in the Levant, which differ greatly from those of the United States and Russia. Washington's concerns center mainly on the threat posed by violent extremist groups, while Russia is working to secure the Syrian government and Moscow's own position in Syria. Israel, however, views events in Syria — and the activities of its immediate western neighbor, Lebanon — primarily through the lens of its enmity with Iran. Tehran's presence and influence in Syria has increased in parallel with the advances of its ally in Damascus, provoking much concern in Israel. And with foes like Iran and Hezbollah well-placed to exploit Israel's vulnerabilities through their missile arsenals, any new conflagration involving the actors is likely to cause significant damage, and not just in military terms.

The competition between Israel and Iran is at its most intense in Lebanon and Syria, where Israel remains deeply concerned over Tehran's influence and presence. The greatest security driver influencing the rivalry are the respective missile arsenals wielded by Iranian and Hezbollah, something that affects Israel's wider security posture and its negotiating strategy with Russia and the United States.

The Missiles on the Northern Frontier

In the event of an open conflict between Israel and Iran, the latter could seek to strike its Mediterranean rival in a number of ways. The greatest threat to Israel, however, comes from the ballistic missile and artillery rocket arsenal of Iran and its Lebanese ally, Hezbollah. By entrenching itself in Syria, Tehran can bolster Hezbollah's already sizable arsenal in Lebanon while also deploying its own rocket artillery and ballistic missiles in Syria.

Hezbollah has demonstrated the seriousness of its threat against Israel in the past, when the militant group inflicted heavy economic damage on Israel through daily rocket attacks during the 2006 Lebanese War. At the time, Hezbollah's arsenal consisted of approximately 10,000 rockets — an overwhelming majority of which were relatively short-range artillery rockets. Although Israel managed to destroy most of Hezbollah's much smaller cache of longer-range rockets in its first strikes during the war, the Lebanese group succeeded in launching an average of 120 rockets per day at Israel during the conflict. All told, the strikes cost the Israeli economy $3.5 billion as they forced businesses to close, authorities to call up reserves and tourists to give the country a wide berth.

Twelve years on, Hezbollah boasts a significantly more potent arsenal. The group is believed to possess a stockpile of more than 130,000 rockets and missiles. Moreover, Hezbollah has also dramatically improved the qualitative nature of its weaponry, amassing many larger projectiles that feature a longer range and improved accuracy, including Fajr-5 artillery rockets, Fateh-110 missiles and others. And according to credible reports, Hezbollah may have even received shipments of Scud-B/C missiles. Over time, Iran has also reinforced its own Syria-based missile force, which includes primary longer-range missiles and even factories to manufacture the weaponry on site. 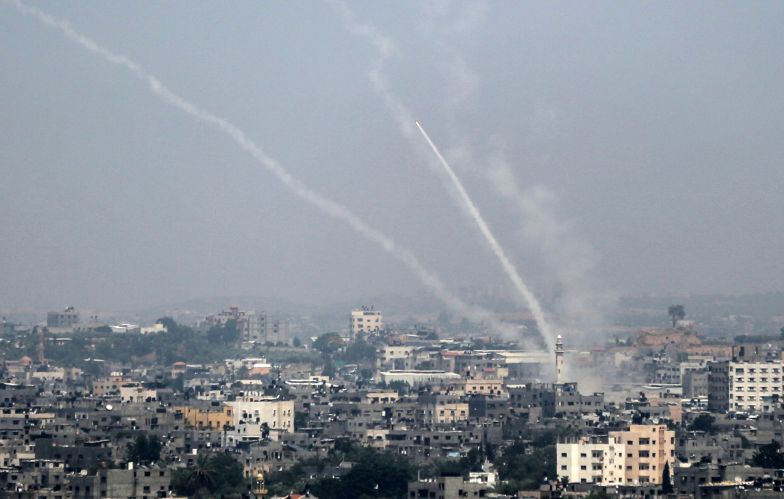 Because of the weapons in play, Iran and its proxy allies can strike all of Israel — which lacks strategic depth due to its small geographic size — with ever-growing precision. Especially vulnerable are large, static sites, such as transportation, water, electrical, nuclear and oil and natural gas facilities. Naturally, any strike on chemical and industrial facilities could cause significant collateral damage by releasing hazardous chemicals and gases.

Even beyond the physical damage of an attack on such sites, the effects of rocket artillery barrages on Israel would significantly damage the country's economy, as occurred during the 2006 conflict with Lebanon. Rocket attacks force the population to seek sanctuary in shelters for extended periods of time, postpone or cancel routine business activity and reduce road traffic, thereby disrupting economic activity severely. Such a scenario would also compel Israeli authorities to call up a significant portion of its reserve troops for battle, further impacting normal economic activity. 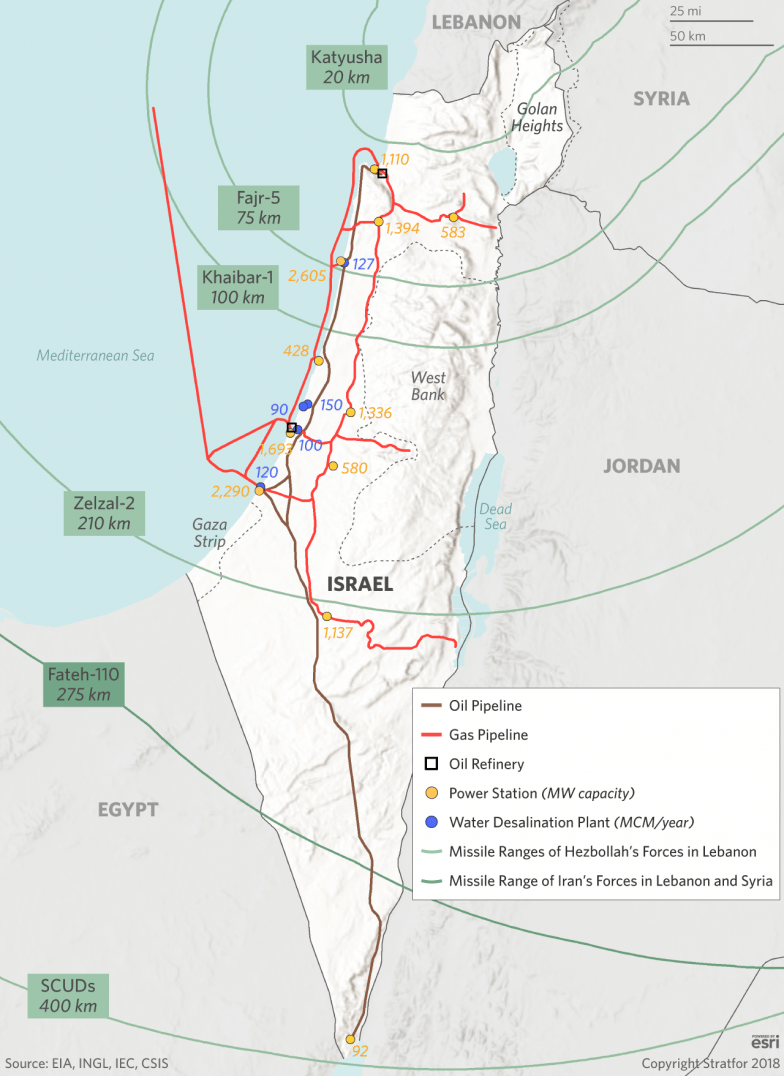 These specific vulnerabilities provide Iran with a potent asymmetric deterrent that its forces are determined to further reinforce. The Israeli military may boast vastly more power and resources than Hezbollah, but Israel is wary of staging a direct assault on Hezbollah in Lebanon, principally due to the deterrent presented by the group's rocket arsenal. And in a similarly asymmetric effort to discourage Israel from conducting a direct attack on Iran, Tehran intends to enhance its missile force in the area, both in locations controlled by Hezbollah in Lebanon, as well as in Syria.

Aware of its vulnerability to Iran and Hezbollah's indirect weaponry, Israel has adopted a multi-layered strategy to mitigate the threat. On the diplomatic front, Israel has focused its approach on the United States and Russia, striving to convince the two superpowers to heed its interests in Syria by containing and limiting Iran's influence and presence in the country. Israel has made some gains in this regard, as both Washington and Moscow have pledged to work toward creating a buffer zone between the Israeli-controlled Golan Heights and Iranian elements on the ground. As part of this plan, the Kremlin recently announced that Iran would withdraw its heavy weapons to at least 85 kilometers from the Golan Heights. Still, the wider Israeli ambition of completely expelling Iran from Syria faces significant limitations, as Russia is both unwilling and incapable of forcing Tehran to abandon Syria entirely. 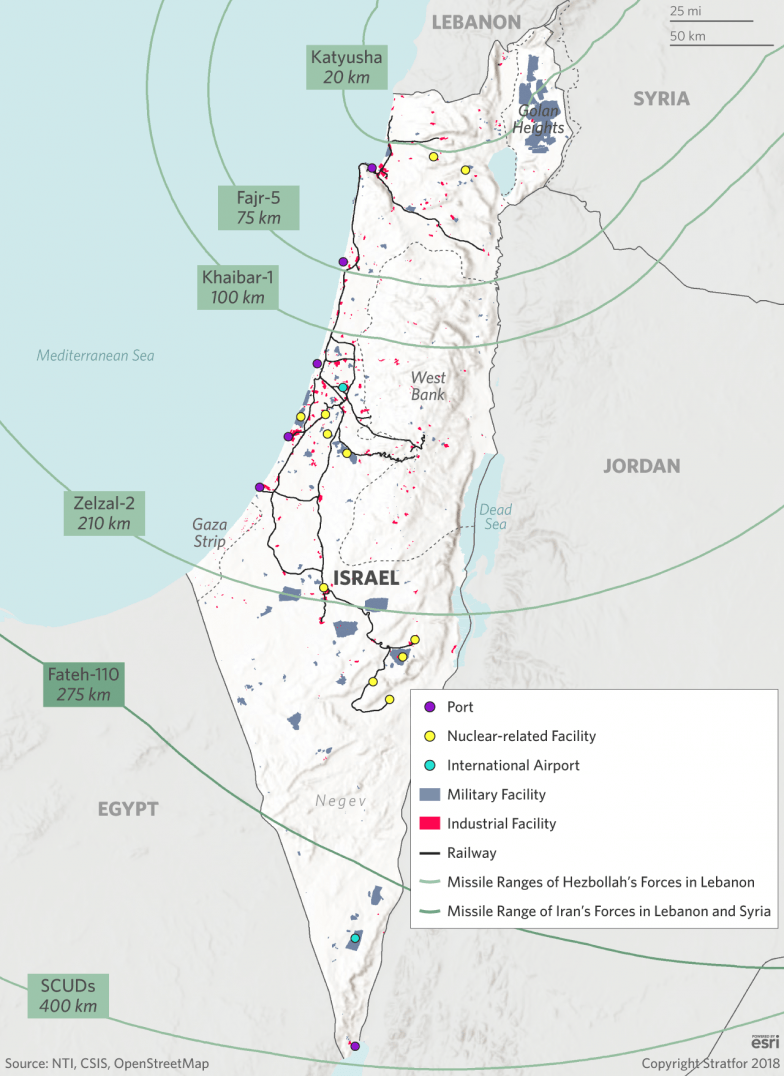 Recognizing the limitations of its diplomatic offensive, Israel has begun relying on interdiction strikes — targeting enemy territory that is behind the immediate frontline — to degrade and disrupt the buildup of Iranian forces in Syria, as well as stymie Tehran's efforts to directly supply Hezbollah in Lebanon. Over the last year, the Israeli strikes have increased in intensity as the country has become more concerned by Iran's entrenchment in Syria. The raids have inflicted considerable damage on Iranian and Hezbollah targets, but they have not halted Iran from maintaining and even reinforcing its presence in Syria. More worryingly for regional stability, the strikes could eventually provoke Iranian retaliation, potentially leading to the same damaging war scenario described above.

Israel has also worked to improve its defenses at home. In this regard, the country has focused on missile defense systems, establishing a multi-tiered defense against rocket and missile attack. The Iron Dome system, which has proved its effectiveness in the past, is designed to intercept relatively short-range rockets. David's Sling, meanwhile, defends the country against longer-range rockets as well as short-range ballistic missiles. Finally, the Arrow system forms the upper-tier portion of Israel's missile defense, protecting against medium- and long-range ballistic missiles. Israel's considerable investment in a sophisticated missile defense network provides it with some defense against rocket and missile attacks, particularly in conflicts against a relatively weak adversary such as Hamas in Gaza. But the country's missile defense network is vulnerable to strikes in which an adversary launches rockets and missiles that exceed the number of Israeli interceptors — as would occur if Hezbollah or Iran staged an attack.

The next war between the two sides could be a lot more damaging than their last battle in 2006.

In the face of such issues, Israel has adopted a military strategy emphasizing offensive operations given any serious clash with Hezbollah or Iran in the north. Such a doctrine involves launching a ground attack into Lebanon — and, potentially, Syria — to destroy the launch pads used to fire Hezbollah and Iranian projectiles, thus reducing the amount of time that either could continue its offensive.

Syria's long-running war is winding down on some fronts, but hostilities could soon flare up elsewhere in the conflict. Hezbollah and Iran have worked diligently to build up their weapons capabilities in an effort to exploit some of Israel's vulnerabilities, prompting the latter to draft a robust defense strategy against its greatest antagonists. Altogether, the situation ensures that the next war between the two sides could be a lot more damaging than their last battle in 2006.