The headquarters of Alibaba in Hangzhou, Zhejiang province.

The growth of large online investment platforms has captured the attention of Chinese authorities in recent months. Non-state enterprises such as Alibaba Group Holding Ltd., which runs the e-commerce website Taobao, and Tencent Holdings Ltd., a social media conglomerate that runs the popular WeChat online messaging program, are an emerging force in China's financial system.

The question is whether these online financing platforms could start to chip away at state-controlled banks' effective monopoly over the country's vast pool of household and corporate savings. For now, funds invested into new online financing platforms such as Alibaba's Yu'e Bao are equivalent to a little more than 1 percent of the state-controlled banking sector's roughly 74.2 trillion yuan ($12 trillion dollars) in consumer deposits. But the platforms are growing rapidly.

Online investment platforms offer attractive avenues for ordinary Chinese to invest their personal wealth. They have been able to deliver high rates of return (currently around 6 percent for Yu'e Bao and about 6.5 percent for Licaitong, Tencent's competitor platform), and they enable depositors to withdraw funds at any time, an option known as demand deposit. Furthermore, they are convenient to use because they are tied to popular services such as Taobao and WeChat. These factors have made them more attractive than smaller-scale online peer-to-peer lending companies that have been active for several years but have recently run into trouble due to borrower defaults. 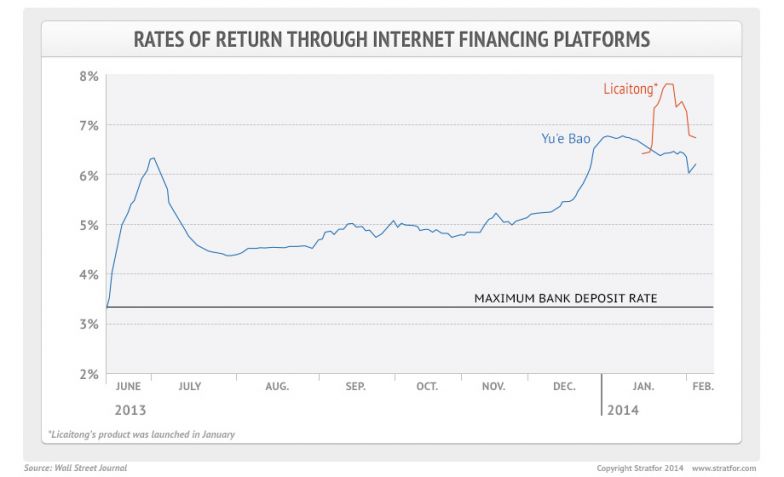 The impressive growth rate of Yu'e Bao, and to a lesser extent its competitors, will inevitably slow. As these companies become larger, traditional banks will adapt and begin to compete, and eventually the new platforms will saturate their core user bases. But with Internet use in China developing rapidly, it is reasonable to expect that funds such as Yu'e Bao have ample space to grow right now.

Banks in China have long enjoyed what many observers consider implicit subsidies in the form of large spreads between the interest rates they charge borrowers (most often state-owned enterprises) and the much lower rates they pay depositors. This arrangement is underpinned by a system of tight capital controls that leaves most ordinary Chinese with little choice but to park their savings in a banks' coffers.

Several avenues have emerged to fill this gap in recent years — from investment in real estate to informal investment tools, including wealth management products, categorized in China as shadow lending. These paths are prohibitively expensive for most Chinese consumers. More accessible investment options such as the stock market are notoriously unstable. Depositors therefore keep their savings in banks, where the rate of return is often lower than inflation. The spread between interest and deposit rates has made China's largest banks not only some of the world's wealthiest institutions but also key pillars of Communist Party power — and of economic stability in general. This has been especially true in the years since the 2007-2008 global financial crisis, when the Chinese government turned to these banks to keep China's economy churning by loosening credit to state-owned enterprises and local government financing vehicles.

Now, banks face the prospect of real competition from sophisticated investment platforms that harness the speed and reach of the Internet and are operated by some of China's most competitive private conglomerates.

Right now, Yu'e Bao and its competitors remain effectively unregulated. The only real constraint on their growth is the limits imposed by banks on the amount of assets that can be digitally transferred from bank accounts in a single day and a single month.

How big these platforms get, and how quickly, will depend in large part on the regulators' response. In recent weeks, China's central bank and its top financial regulators have acknowledged the need for better oversight. On Feb. 26, the China Securities Regulatory Commission said it is mulling raising the minimum reserve requirement ratios of money market funds. Currently these funds must hold 10 percent of their balances in cash, but that could rise to an unspecified and probably much higher ratio. Such a measure could blunt the growth of online investment platforms by forcing them to either lower the yields promised to depositors or to do away with demand deposit — a major selling point for the funds.

The growth and lack of regulation over large-scale investment platforms poses the most immediate risk to small and medium-sized banks. These banks lack the enormous consumer deposit bases of China's so-called Big Four state-owned banks — the Industrial and Commercial Bank of China, the China Construction Bank, the Bank of China and the Agricultural Bank of China. The smaller banks will therefore be the first to feel the pain of increased competition for deposits — a competition that many banks, constrained by the lack of a national reach, may lose.

Increased competition for deposits is only part of the picture, however. The online platforms invest the vast majority of their users' funds into China's interbank money markets, on which cash-strapped small and medium-sized banks increasingly depend to make their monthly and quarterly payments. This means that China's small and medium-sized banks are borrowing from platforms like Yu'e Bao even as they compete for deposits with these same platforms.

Moreover, given the rates of return promised to investors by the online financing platforms, it is reasonable to assume that these platforms are lending to banks at rates far higher than the Shanghai interbank overnight and weekly averages. In some respects, the new platforms complement the state-controlled banking sector: The platforms are providing much-needed funds to banks. But this feeds a growing imbalance between the state and informal banking systems. Local state-owned banks across China are heavily and increasingly indebted to a range of private and informal lenders that by definition remain largely outside the purview of the state.

Increased competition for deposits will also drive up the cost of capital for state-owned enterprises, which traditionally have enjoyed government-regulated low interest rates on loans. Internet financing platforms are a small but growing element in the panoply of informal investment and lending tools that have emerged in recent years as byproducts of the state banking system's monopoly on formal credit. They provide necessary liquidity to small and medium-sized enterprises, and they do so outside the reach of state control. As these tools grow, however, and especially if they compete on a larger scale with state-owned banks for depositors, they will add to the pressure to loosen controls on interest rates, bringing the rates more in line with market forces.

This will likely mean, at least temporarily, higher rates for the state system's borrowers — including many national champions in strategically significant industries. The long-term fear is that China's state sector — which includes pillar industries such as oil and natural gas, steel, cement, coal, power transmissions, transportation and logistics — could buckle under the weight of higher interest rates. Many of these industries are already beset by troubles stemming from the country's stimulus drive and its subsequent economic slowdown.

Changing Impact on the Economy

Finally, there is the question of where the funds invested into these platforms end up, and therefore what impact a crisis in the platforms themselves might have on the rest of the economy. As noted above, at present Yu'e Bao invests the vast majority of its funds into relatively liquid assets such as interbank markets and corporate and government bonds. Their immediate impact on the economy is thus primarily to bolster interbank and banking system liquidity. But recent reports suggest that a small but growing portion of Yu'e Bao's funds are being channeled not to money markets but to small enterprises, either directly or indirectly. By mid-2013, Alibaba had disbursed at least $2 billion in loans to several hundred thousand merchants on its e-commerce site, Taobao.

In January, government authorities tentatively endorsed these and similar activities by announcing a pilot plan to establish between three and five private banks, with Tencent and Chinese electronics giant Suning Appliance Co. Ltd. named as potential candidates. How widely and rapidly this plan is implemented will depend, in part, on the continued success and stability of platforms such as Yu'e Bao. At present, only some 2 percent of Alibaba's loans have soured, and the company cites its vast trove of data on established Taobao merchants — currently its only borrowers — as evidence that it can continue to effectively assess and manage loan risk. Alibaba's management has made clear its intent to expand the company's banking presence, but it remains to be seen how regulators and China's powerful banks will respond.