The image of a 2012 rocket launch is shown at a Pyongyang railway station on Feb. 3, 2016, as North Korea announced plans to launch a satellite. The launch four days later marked the latest push by the North to demonstrate its missile capabilities.

Amid the latest series of North Korean missile tests, South Korea's Ministry of Unification has reported that Pyongyang is ready to carry out its fifth nuclear weapons test detonation and may simply be waiting for a politically advantageous time to do so. Over the past few months, North Korea has apparently accelerated its efforts to develop a deployable nuclear weapon and a long-range missile delivery system. In addition to its fourth underground nuclear test and another attempted satellite launch atop a Taepodong/Unha rocket, which can also serve as an intercontinental ballistic missile (ICBM), the North has recently published sets of photos of what it claims are a miniaturized nuclear warhead and a ground test of a rocket nose cone to demonstrate its re-entry capability. The images coincide with an uptick in rhetoric regarding the development of a viable nuclear deterrent. Though Pyongyang appears to be moving forward with its goal of creating a functional system, it still has several steps left to complete before it reaches its objective.

If the North wants to bolster the credibility of its claims of possessing a long-range nuclear deterrent, it will need to do at least two more things: conduct active re-entry tests to verify the viability of a nose cone and conduct a test of a guidance system for re-entry. In some ways, North Korea's path remains complex and difficult. After all, it is rocket science. In another sense, though, Pyongyang is not seeking to match current U.S., Russian or Chinese technologies. Instead, it would be sufficient to demonstrate technologies from the 1950s and 1960s — technologies that have been amply documented, studied and tested.

The United States developed its first ICBM during the span of two years of Atlas rocket tests. That said, it was able to draw on the considerable resources of a large nation. Pyongyang, meanwhile, is constrained technologically, financially and politically. And while North Korea may carry out fewer tests than the big powers, it cannot skip certain critical steps. North Korea's timetable has clearly been much slower than that of the United States. Pyongyang's first Scud-B launch took place in the early 1980s; its first test of the intermediate-range Nodong followed in 1990. The first test of the longer-range Taepodong took place in 1998, with six launches so far, several of which were clearly unsuccessful. In regards to rocket technology, the North may be fairly confident it now has a viable launch system, at least to provide the range of an ICBM, and it is shifting its attention to developing a resilient nose cone and accurate guidance system. 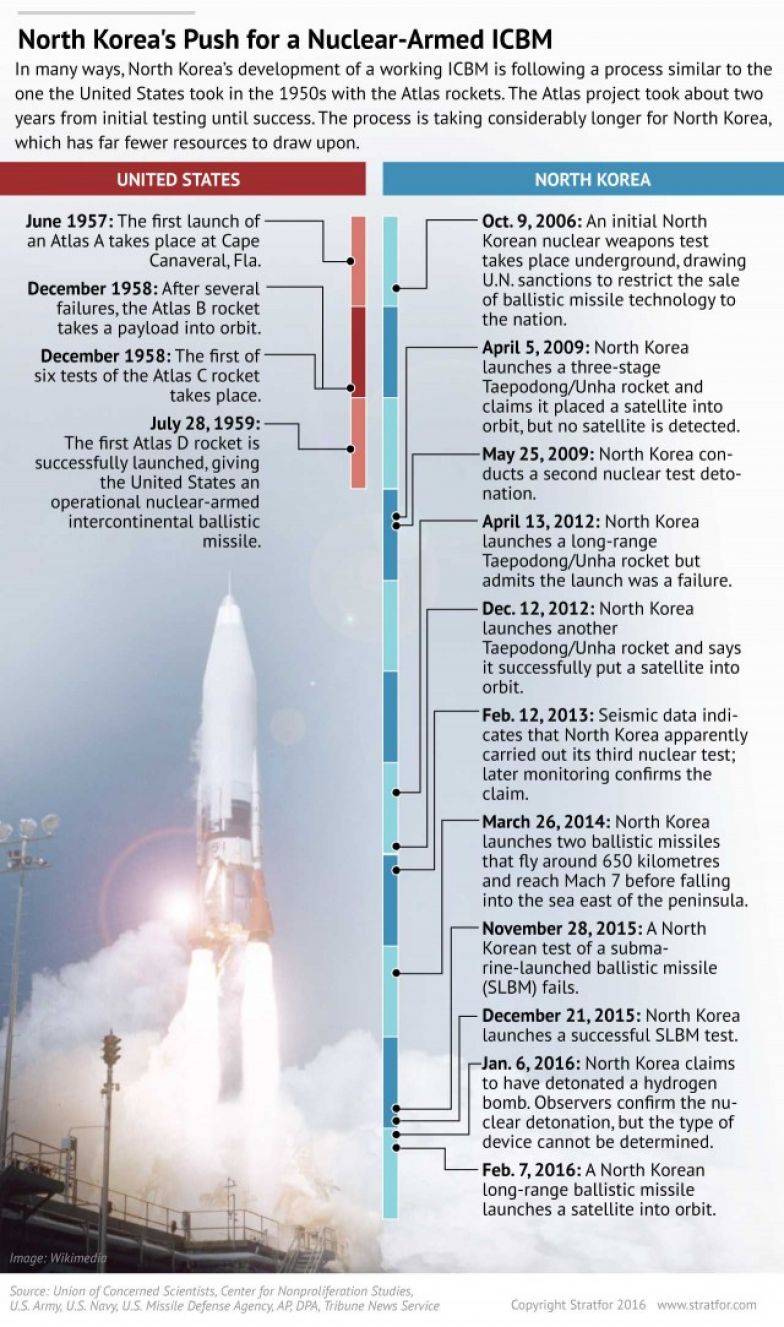 It is perhaps no coincidence that Pyongyang has shown off in rapid succession a model miniaturized nuclear warhead and a ground test of a nose cone. The initial ground test shown by the North was intended to highlight advancements in metallurgy and demonstrate the nose cone's ability to survive a simulated re-entry. But ground tests will be insufficient. The North's test rig may not quite re-create re-entry temperatures, pressure and vibrations. The North must conduct one or more flight tests with a nose cone that undergoes re-entry and is recovered. Sensors and dummy warheads inside will help determine whether the nose cone could protect a sensitive nuclear device. A test of a system with a real nuclear device is not necessary and in fact is extremely rare even among current nuclear powers for obvious reasons. The United States tested a complete submarine-launched nuclear missile in 1962, detonating over Christmas Island, and China tested a complete medium-range nuclear device in 1966, detonating over Lop Nor.

The North will also test a guidance system, likely alongside the nose cone survivability tests. This also requires live tests, with re-entry and preferably recovery of the re-entry vehicle. Given the general flight path of North Korean missiles and the size of North Korea, such recovery would probably be at sea, requiring additional naval developments by Pyongyang before a test could feasibly take place. While nuclear devices do not necessarily need an extremely fine guidance system (U.S. ICBMs with larger warheads with a five-mile margin of accuracy were considered acceptable), even a five-mile circle is fairly tiny at the end of a more than 4,000-mile (6,437-kilometer) flight. 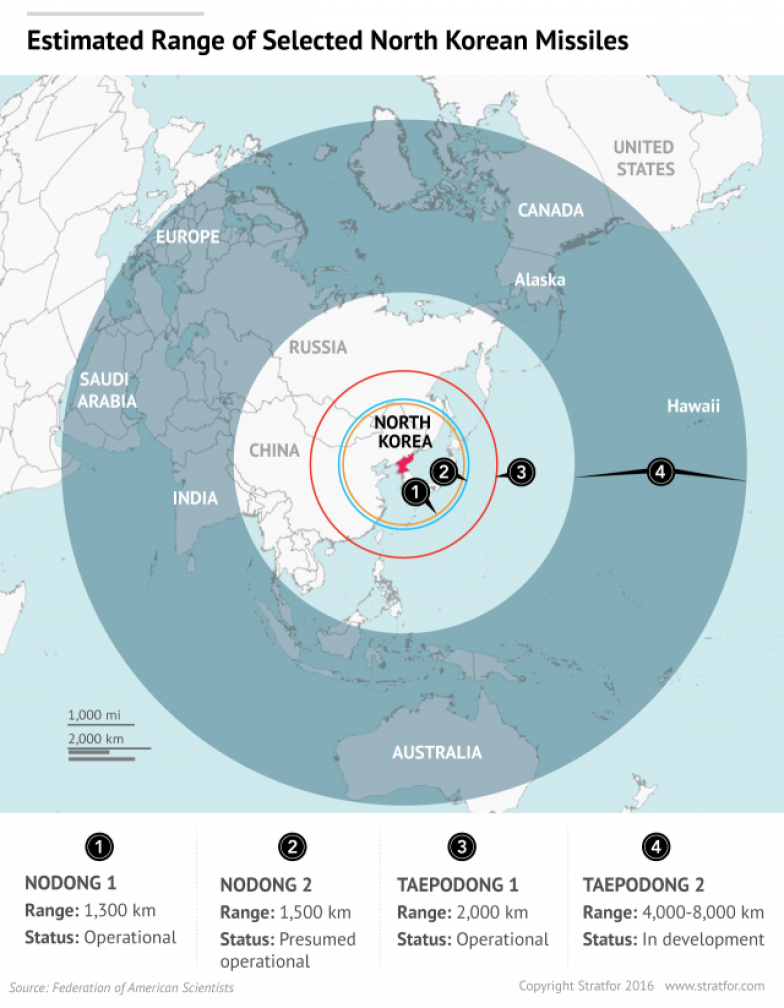 Should the North carry out a successful demonstration of guided re-entry, it would match the United States at the stage of its earliest nuclear-armed ICBMs and mark a major step for Pyongyang. However, the world is a different place than it was in the 1950s, and technology is different, too. Pyongyang's current Taepodong/Unha systems require days of fueling before launching on one of the country's two suitable launch pads, which are kept under constant surveillance. The United States and China, and even South Korea and Japan, have the capability to detect and destroy a rocket on the pad, reducing the value of the nuclear deterrent. However, successful testing of the KN-08 mobile missile system or further tests of its submarine-launched missile may serve as the final step for the North to showcase a viable deterrent capability.

As we watch the North's progress, important tests to look for will include re-entry and recovery after launch. The success of those tests marks the difference between having a nuclear device and having a long-range nuclear weapon. Such tests will not go unnoticed, and the risk of conducting them is in their failure or the recovery of the re-entry vehicle by another nation. Pyongyang might develop a deployable short- or intermediate-ranged nuclear-armed missile without a re-entry test, but that would fail to achieve its intended goal of creating a demonstrable nuclear device capable of reaching the United States, which would provide what Pyongyang perceives as the insurance it needs to dissuade U.S. military action.