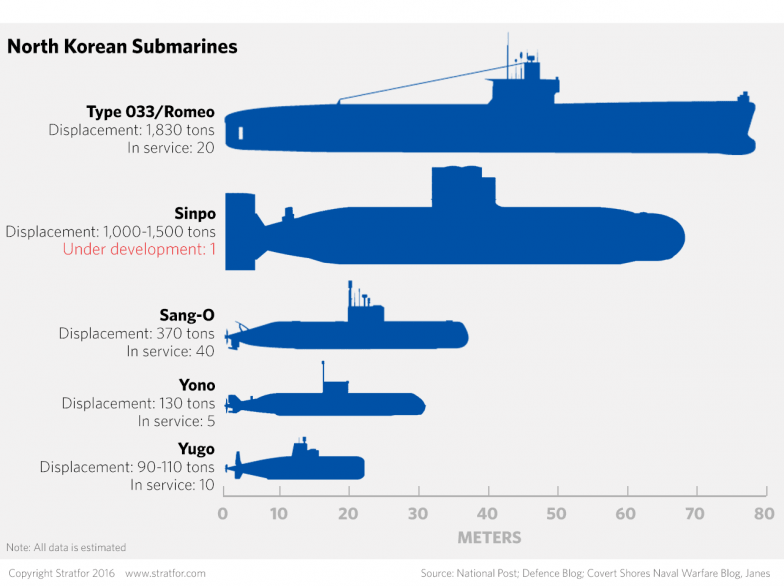 Submarine-launched ballistic missiles would give North Korea two distinct advantages. First, they would extend the reach of North Korea's missile systems, theoretically enabling it to strike targets outside of ground-based missile range. Second, submarine-launched missiles, because they are offshore and mobile, would give North Korea a second-strike capability, allowing it to retaliate against attacks on its land-based nuclear bases and launch pads.

These benefits assume, however, that North Korean submarines have two important characteristics: sufficient size to carry ballistic missiles and an adequate level of endurance, or the amount of time a vessel can remain at sea unsupported.

The smallest submarine to ever carry a submarine-launched ballistic missile is the Soviet Zulu IV-class. It displaces approximately 2,000 metric tons of water carrying its one to two nuclear ballistic missiles. It is also heavier than the Type 033, currently North Korea's largest model. Pyongyang will need bigger vessels in the future to carry one to two missiles in an operational capacity. To carry more would require a new and entirely different class of submarine.

Submarines would also need to be able to continue without support long enough to reach targets beyond the range of land-based missiles. In order to fulfill a second-strike role, vessels would need to be deployed for months far from vulnerable ports and be ready for counterattack. Even with modifications, North Korea's Type 033 submarines cannot meet these endurance requirements.

Without an adequate submarine, the resources Pyongyang is investing in new missile technology will not improve the capability of its existing land-based missile program, and a suitable ballistic missile submarine would take several years to complete. Until then, the missiles under development will not provide the major benefits associated with a submarine-launched system.