Editor's Note: For more information on purchasing the full PC16 report, which assesses each member of the grouping, and for details on custom briefings and analysis for your organization, please click here.

China has become a metaphor. It represents a certain phase of economic development, which is driven by low wages, foreign appetite for investment and a chaotic and disorderly development, magnificent in scale but deeply flawed in many ways. Its magnificence spawned the flaws, and the flaws helped create the magnificence.

The arcs along which nations rise and fall vary in length and slope. China's has been long, as far as these things go, lasting for more than 30 years. The country will continue to exist and perhaps prosper, but this era of Chinese development — pyramiding on low wages to conquer global markets — is ending simply because there are now other nations with even lower wages and other advantages. China will have to behave differently from the way it does now, and thus other countries are poised to take its place.

Since the Industrial Revolution, there have always been countries where comparative advantage in international trade has been rooted in low wages and a large work force. If these countries can capitalize on their advantages, they can transform themselves dramatically. These transformations, in turn, reorganize global power structures. Karl Kautsky, a German socialist in the early 1900s, wrote: "Half a century ago, Germany was a miserable, insignificant country, if her strength is compared with that of the Britain of that time; Japan compared with Russia in the same way. Is it conceivable that in 10 or 20 years' time the relative strength will have remained unchanged?" Lenin also saw these changes, viewing them as both progressive and eventually revolutionary. When Kautsky and Lenin described the world, they did so to change it. But the world proved difficult to change. (It is ironic that two of the four BRIC countries had been or still are Communist countries.)

When it is not in the throes of war, trade reshapes the international order. After World War II, Germany and Japan climbed out of their wreckage by using their skilled, low-wage labor to not only rebuild their economy but to become great exporting powers. When I was a child in the 1950s, "Made in Japan" meant cheap, shoddy goods. By 1990, Japan had reached a point where its economic power did not rest on entry-level goods powered by low wages but by advanced technology. It had to move away from high growth to a different set of behaviors. China, like Japan before it, is confronted by a similar transition. 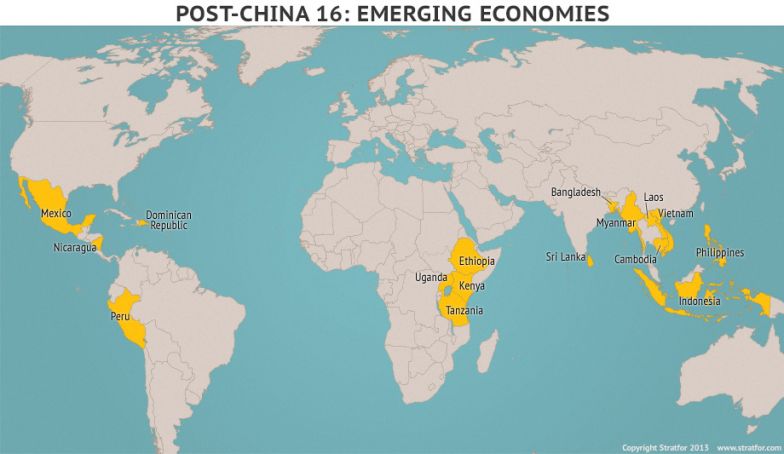 The process is fraught with challenges. At the beginning of the process, what these countries have to sell to their customers is their relative poverty. Their poverty allows them to sell labor cheaply. If the process works and the workers are disciplined, investment pours in to take advantage of the opportunities. Like the investors, local entrepreneurs prosper, but they do so at the expense of the workers, whose lives are hard and brutal.

It's not just their work; it's their way of life. As workers move to factories, the social fabric is torn apart. But that rending of life opens the door for a mobile workforce able to take advantage of new opportunities. Traditional life disappears; in its place stand the efficiencies of capitalism. Yet still the workers come, knowing that as bad as their lot is, it is better than it once was. American immigration was built on this knowledge. The workers bought their willingness to work for long hours and low wages. They knew that life was hard but better than it had been at home, and they harbored hopes for their children and with some luck, for themselves.

As the process matures, low wages rise — producing simple products for the world market is not as profitable as producing more sophisticated products — and the rate of growth slows down in favor of more predictable profits from more complex goods and services. All nations undergo this process, and China is no exception. This is always a dangerous time for a country. Japan handled it well. China has more complex challenges.

Indeed, China is at the fringes of its low-wage, high-growth era. Other countries will replace it. The international system opens the door to low-wage countries with appropriate infrastructure and sufficient order to do business. Low-wage countries seize the opportunity and climb upon the escalator of the international system, and with them come the political and business elite and the poor, for whom even the brutality of early industrialism is a relief.

But identifying these countries is difficult. Trade statistics won't capture the shift until after it is well underway. In some of these countries, such as Vietnam and Indonesia, this shift has been taking place for several years. Though they boast more sophisticated economies than, say, Laos and Myanmar, they can still be considered members of what we are calling the Post-China 16, or PC16 — the 16 countries best suited to succeed China as the world's low-cost, export-oriented economy hub.

In general, we are seeing a continual flow of companies leaving China, or choosing not to invest in China, and going to these countries. This flow is now quickening. The first impetus is the desire of global entrepreneurs, usually fairly small businesses themselves, to escape the increasingly non-competitive wages and business environment of the previous growth giant. Large, complex enterprises can't move fast and can't use the labor force of the emerging countries because it is untrained in every way. The businesses that make the move are smaller, with small amounts of capital involved and therefore lower risk. These are fast moving, labor-intensive businesses who make their living looking for the lowest cost labor with some organization, some order and available export facilities.

In looking at this historically, two markers showed themselves. One is a historical first step: garment and footwear manufacturing, a highly competitive area that demands low wages but provides work opportunities that the population, particularly women, understand in principle. A second marker is mobile phone assembly, which requires a work force that can master relatively simple operations. Price matters greatly in this ruthlessly competitive market.

Therefore we tried to determine places where these businesses are moving. We were not looking for the kind of large-scale movements that would be noticed globally, but the first movements that appear to be successful. Where a handful of companies are successful, others will follow, so long as there is labor, some order and transportation. Some things are not necessary or expected. The rule of law, understood in Anglo-Saxon terms of the written law, isn't there at this stage. Things are managed through custom and relationships with the elite. Partnerships are established. Frequently there is political uncertainty, and violence may have recently occurred. These are places that are at the beginning of their development cycle, and they may not develop successfully. Investors here are risk takers — otherwise they wouldn't be here.

The beginning of China's boom is normally thought of as 1978-1980. The Cultural Revolution had ended a few years before. It was a national upheaval of violence with few precedents. Mao Zedong died in 1976, and there had been an intense power struggle, with Deng Xiaoping consolidating power in 1977. China was politically unstable, had no clear legal system, sporadic violence and everything else that would make it appear economically hopeless. In fact, Egbert F. Dernberger and David Fasenfest of the University of Michigan wrote a paper for the Joint Economic Committee of Congress titled "China's Post-Mao Economic Future." In this paper, the authors state: "In the next seven years as a whole, the rate of industrial investment and production, more than the total of the last 28 years, imply a level of imports and industrial labor force such that the exports, transportation facilities, social overhead capital, energy and middle-level technical personnel requirements would exceed any realistic assessment of Chinese capabilities."

I don't mean to criticize the authors. This was the reasonable, conventional wisdom at the time. It assumed that the creation of infrastructure and a managerial class was the foundation of economic growth. In fact in China, it was the result of economic growth. The same can be said for rule of law, civil society, transparency and the other social infrastructure that emerges out of the social, financial and managerial chaos that a low-wage economy almost always manifests. Low-wage societies develop these characteristics possibly out of the capital formation that low-wage exports generates. The virtues of advanced industrial society and the advantages of pre-industrial society don't coincide.

There is no single country that can replace China. Its size is staggering. That means that its successors will not be one country but several countries, most at roughly the same stage of development. Taken together, these countries have a total population of just over 1 billion people. We didn't aim for that; we realized it after we selected the countries.

The point to emphasize is that identifying the PC16 is not a forecast. It is a list of countries in which we see significant movement of stage industries, particularly garment and footwear manufacturing and mobile phone assembly. In our view, the dispersal of industries that we see as markers of early-stage economic growth is already underway. In addition, there are no extreme blocks to further economic growth, although few of these countries would come to mind as having low political risk and high stability — no more than China would have come to mind in 1978-1980. I should also note that we have excluded countries growing because of energy and mineral extraction. These countries follow different paths of development. The PC16 are strictly successors to China as low wage, underdeveloped countries with opportunities to grow their manufacturing sectors dramatically.

There are some countries in Latin America: Peru, the Dominican Republic, Nicaragua and Mexico. A special word needs to be included on Mexico. The area north of Mexico City and south of the U.S. borderlands has been developing intensely in recent years. We normally would not include Mexico but the area in central-southern Mexico is large, populous and still relatively underdeveloped. It is in this area, which includes the states of Campeche, Veracruz, Chiapas and Yucatan, where we see the type of low-end development that fits our criteria. Mexico's ability to develop its low-wage regions does not face the multitude of challenges China faces in doing the same with its interior.

All of this has to be placed in context. This is not the only growth process underway. It is most unlikely that all of these countries will succeed. They are not yet ready, with some exceptions, for advanced financial markets or quantitative modeling. They are entering into a process that has been underway in the world since the late 1700s: globalism and industrialism combined. It can be an agonizing process and many have tried to stop it. They have failed not because of their respective ruling classes, which would have the most to lose. It doesn't take place because of multinational corporations. They come in later. It takes place because of profit-driven jobbers who know how to live with instability and corruption. It also takes place because of potential workers looking to escape their lives for what to them seems like a magnificent opportunity but for us seems unthinkable.

The parabola of economic development dictates that what has not yet risen will rise and eventually fall. The process unleashed in the Industrial Revolution does not seem to be stoppable. In our view, this is the next turning of the wheel.