Polish national strategy pivots around a single, existential issue: how to preserve its national identity and independence. Located on the oft-invaded North European Plain, Poland's existence is heavily susceptible to the moves of major Eurasian powers. Therefore, Polish history has been erratic, with Poland moving from independence — even regional dominance — to simply disappearing from the map, surviving only in language and memory before emerging once again. 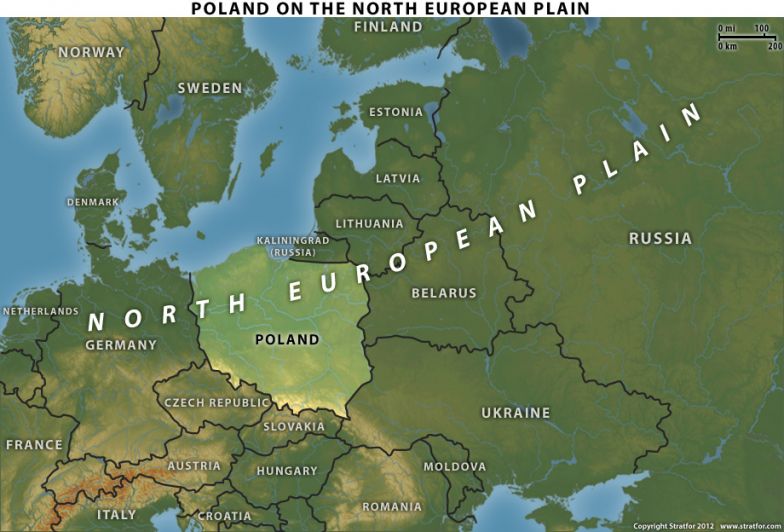 For some countries, geopolitics is a marginal issue. Win or lose, life goes on. But for Poland, geopolitics is an existential issue; losing begets national catastrophe. Therefore, Poland's national strategy inevitably is designed with an underlying sense of fear and desperation. Nothing in Polish history would indicate that disaster is impossible.

To begin thinking about Poland's strategy, we must consider that in the 17th century, Poland, aligned with Lithuania, was one of the major European powers. It stretched from the Baltic Sea almost to the Black Sea, from western Ukraine into the Germanic regions. By 1795, it had ceased to exist as an independent country, divided among three emerging powers: Prussia, Russia and Austria. 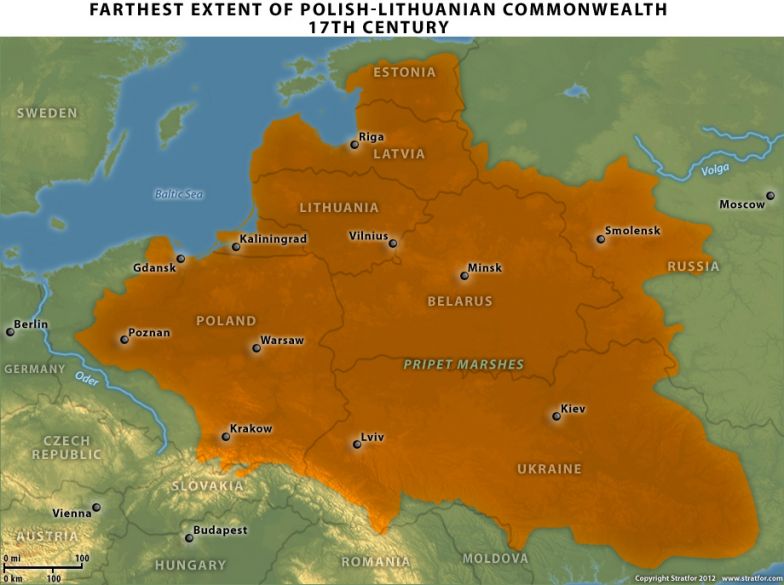 It did not regain independence until after World War I — it was created by the Treaty of Versailles (1919) — after which it had to fight the Soviets for its existence. Poland again was brought under the power of a foreign nation when Germany invaded in 1939. Its statehood was formalized in 1945, but it was dominated by the Soviets until 1989.

Informed by its history, Poland understands that it must retain its independence and avoid foreign occupation — an issue that transcends all others psychologically and practically. Economic, institutional and cultural issues are important, but the analysis of its position must always return to this root issue.

Poland has two strategic problems. The first problem is its geography. The Carpathian Mountains and the Tatra Mountains provide some security to Poland's south. But the lands to the east, west and southwest are flat plains with only rivers that provide limited protection. This plain was the natural line of attack of great powers, including Napoleonic France and Nazi Germany.

During the 17th century, the Germans were fragmented in the Holy Roman Empire, while Russia was still emerging as a coherent power. The North European Plain was an opportunity for Poland. Poland could establish itself on the plain. It could protect itself against a challenge from any direction. But Poland becomes extremely difficult to defend when multiple powers converge from different directions. If Poland is facing three adversaries, as it did in the late 18th century with Prussia, Russia and Austria, it is in an impossible position.

For Poland, the existence of a powerful Germany and Russia poses an existential problem, the ideal solution to which is to become a buffer that Berlin and Moscow respect. A secondary solution is an alliance with one for protection. The latter solution is extremely difficult because dependence on Russia or Germany invites the possibility of absorption or occupation. Poland's third solution is to find an outside power to guarantee its interests.

This is what Poland did in the 1930s with Britain and France. This strategy's shortcomings are obvious. First, it may not be in the interests of the security guarantor to come to Poland's assistance. Second, it may not be possible at the time of danger for them to help Poland. The value of a third-party guarantee is only in deterring attack and, failing that, in the willingness and ability to honor the commitment.

Since 1991, Poland has sought a unique solution that was not available previously: membership in multilateral organizations such as the European Union and NATO. Such memberships are meant to provide protection outside the bilateral system. Most important, these memberships bring Germany and Poland into the same political entity. Ostensibly, they guarantee Polish security and remove the potential threat of Germany.

This solution was quite effective while Russia was weak and inwardly focused. But Polish history teaches that Russian dynamics change periodically and that Poland cannot assume Russia will remain weak or benign in perpetuity. Like all nations, Poland must base its strategy on the worst-case scenario.

The solution also is problematic in that it assumes NATO and the European Union are reliable institutions. Should Russia become aggressive, NATO's ability to field a force to resist Russia would depend less on the Europeans than on the Americans. The heart of the Cold War was a struggle of influence across the North European Plain, and it involved 40 years of risk and expense. Whether the Americans are prepared to do this again is not something Poland can count on, at least in the context of NATO.

Moreover, the European Union is not a military organization; it is an economic free trade zone. As such, it has some real value to Poland in the area of economic development. That isn't trivial. But the extent to which it contains Germany is now questionable. The European Union is extremely stressed, and its future is unclear. There are scenarios under which Germany, not wanting to shoulder the cost of maintaining the European Union, may loosen its ties with the bloc and move closer to the Russians. The emergence of a Germany not intimately tied to a multinational European entity but with increasing economic ties with Russia is Poland's worst-case scenario.

Obviously, close ties with NATO and the European Union are Poland's first strategic solution, but the viability of NATO as a military force is less than clear and the future of the European Union is clouded. This is at the heart of Poland's strategic problem. When it was independent in the 20th century, Poland sought multilateral alliances to protect itself from Russia and Germany. Among these alliances was the Intermarium, an interwar concept promoted by Polish Gen. Jozef Pilsudski that called for an alignment comprising Central European countries from the Baltic Sea to the Black Sea that together could resist Germany and Russia. The Intermarium concept never took hold, and none of these multilateral alliances has proved sufficient to address Polish concerns.

A Matter of Time

Poland has three strategies available to it. The first is to do everything it can to keep NATO and the European Union viable and Germany contained within them. Poland doesn't have the power to ensure this. The second is to create a relationship with Germany or Russia that guarantees its interests. Obviously, the ability to maintain those relationships is limited. The third strategy is to find an outside power prepared to guarantee its interests.

That power is currently the United States. But the United States, after the experiences in the Islamic world, is moving toward a more distant, balance-of-power approach to the world. This does not mean the United States is indifferent to what happens in northern Europe. The growth of Russian power and potential Russian expansionism that would upset the European balance of power obviously would not be in Washington's interest. But as the United States matures as a global power, it will allow the regional balance of power to stabilize naturally rather than intervene if the threat appears manageable.

In the 1930s, Poland's strategy was to find a guarantor as a first resort. It assumed correctly that its own military capability was insufficient to protect itself from the Germans or the Soviets, and certainly insufficient to protect itself from both. Therefore, it assumed that it would succumb to these powers without a security guarantor. Under these circumstances, no matter how much it increased its military power, Poland could not survive by itself.

The Polish analysis of the situation was not incorrect, but it missed an essential component of intervention: time. Whether an intervention on Poland's behalf consisted of an attack in the west or a direct intervention in Poland, the act of mounting such an intervention would take more time than the Polish army was able to buy in 1939.

This points to two aspects of any Polish relationship to the United States. On one hand, the collapse of Poland as Russia resurges would deprive the United States of a critical bulwark against Moscow on the North European Plain. On the other hand, intervention is inconceivable without time. The Polish military's ability to deter or delay a Russian attack sufficiently to give the United States — and whatever European allies might have the resources and intent to join the coalition — time to evaluate the situation, plan a response and then respond must be the key element of Polish strategy.

Poland may not be able to defend itself in perpetuity. It needs guarantors whose interests align with its own. But even if it has such guarantors, the historical experience of Poland is that it must, on its own, conduct a delaying operation of at least several months to buy time for intervention. A joint Russo-German attack, of course, simply cannot be survived, and such multifront attacks are not exceptional in Polish history. That cannot be dealt with. A single-front attack could be, but it will fall on Poland to mount it.

This is a question of economics and national will. The economic situation in Poland has improved dramatically over recent years, but building an effective force takes time and money. The Poles have time, since the Russian threat at this point is more theoretical than real, and their economy is sufficiently robust to support a significant capability.

The primary issue is national will. In the 18th century, the fall of Polish power had as much to do with internal disunity among the Polish nobility as it had to do with a multifront threat. In the interwar period, there was will to resist, but it did not always include the will to absorb the costs of defense, preferring to believe that the situation was not as dire as it was becoming. Today, the will to believe in the European Union and in NATO, rather than to recognize that nations ultimately must guarantee their own national security, is an issue for Poland to settle.

Some diplomatic moves are possible. Polish involvement in Ukraine and Belarus is strategically sound — the two countries provide a buffer that secures Poland's eastern border. Poland likely would not win a duel with the Russians in these countries, but it is a sound maneuver in the context of a broader strategy.

Poland can readily adopt a strategy that assumes permanent alignment with Germany and permanent weakness and lack of aggressiveness of Russia. They might well be right, but it is a gamble. As the Poles know, Germany and Russia can change regimes and strategies with startling speed. A conservative strategy requires a bilateral relationship with the United States, founded on the understanding that the United States is relying on the balance of power and not the direct intervention of its own forces except as a last resort. That means that Poland must be in a position to maintain a balance of power and resist aggression, buying enough time for the United States to make decisions and deploy. The United States can secure the North European Plain well to the west of Poland and align with stronger powers to the west. A defense to the east requires Polish power, which costs a great deal of money. That money is hard to spend when the threat might never materialize.