Though U.S. attention on Africa has been steady over the course of decades, the focus has tended to center on security threats or humanitarian interests. But Nigeria has attracted considerable attention for its bid to expand domestic electricity output. West African prospects for electricity production are shaped in large part by Nigeria's potential to develop oil and natural gas reserves. The main cluster runs through Benin, Togo and Ghana and eventually reaching Ivory Coast along the Gulf of Guinea. Eventually the network could reach as far west as Senegal.

Electrical power generation was a key topic during the inaugural U.S.-Africa Summit, which concluded Aug. 7. U.S. public- and private-sector actors and African political leaders promised to dedicate political and financial capital to power generation initiatives in the continent, citing a shared interest to access, generate, transmit, utilize and export energy. Boosting electricity production and transmission in sub-Saharan Africa will reinforce the fast-paced economic gains many countries in the continent are experiencing. This will expand opportunities for foreign investment in African economies and add to the competitive global hydrocarbons market.

African leaders are accustomed to gatherings like the U.S.-Africa Summit, where political and private-sector leaders spent several days in Washington negotiating at the largest meeting of African leaders in the United States to date. China, India, France, the European Union and other international actors, such as Turkey, have hosted similar events. Though U.S. attention on Africa has been steady over the course of decades, with ties stretching back to the founding of the American republic on matters such as maritime piracy, the focus has tended to center on security threats or on limited and isolated commercial and humanitarian interests. This summit, organized by U.S. President Barack Obama, was broader in scope, aiming to boost African economies and facilitate cooperation between U.S. companies and African countries.

Several significant power production projects underway in Africa factored into the discussions and negotiations in Washington. Nigeria, Africa's most populous country and its largest economy, attracted considerable attention for its bid to expand domestic electricity output. Under the leadership of President Goodluck Jonathan, Abuja aims to at least triple domestic power output and expand the transmission grid throughout the country. 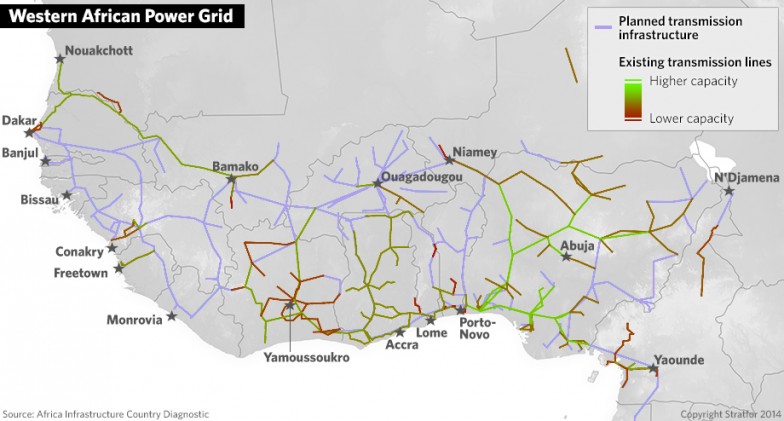 West Africa offers an enticing market anchored by Nigeria, but it is a market lacking the integration seen in the southern and eastern regions of the continent. Southern African countries — from South Africa stretching north to the Democratic Republic of the Congo — brought up a handful of projects that connect systems spanning multiple countries. These included the Grand Inga scheme, under which an estimated 44 gigawatts of hydroelectric power generated in Congo would be transmitted for industrial purposes to South Africa's economic heartland in Johannesburg, possibly supplying other mining centers in Zambia and Zimbabwe along the way.

The countries of the East African Community, notably Tanzania and Kenya, held talks on natural gas and crude oil production. Kenya and Tanzania want to use their emerging extractive industries to satisfy domestic imperatives and meet the demands of regional African markets. These same countries, though, have to factor in demand from South and East Asia while negotiating plans with U.S. companies to develop and market their resource deposits.

West African prospects for electricity production are shaped in large part by Nigeria's potential to develop fossil fuels. Holding Africa's greatest volume of oil and natural gas reserves within its borders, Nigeria has optimal access to natural gas, which can be used for electricity production assuming Abuja can maintain security and political control of the resources. As a result, regional connections between national power grids have spread west and inland from Nigeria. The main cluster is based around the Coastal Transmission Backbone running through Benin, Togo and Ghana and eventually reaching Ivory Coast along the Gulf of Guinea. While some inland connections link Burkina Faso and Niger to this transmission backbone, connectivity with the rest of West Africa is still in the earliest stages of development. Eventually the network could reach as far west as Senegal.

In 2001, the Economic Community of West African States set up a regional organization called the West African Power Pool to manage the development of electricity infrastructure in the region. The group is based on the Southern African Power Pool, which has existed since 1995, but it has developed into something different because of West Africa's less developed regional electricity generation and transmission infrastructure.

Nigeria currently provides about half the electricity generation capacity within the West African Power Pool, a reasonable amount considering the country's abundance of natural gas and extensive natural gas-fired power generation infrastructure. Nigeria is also the largest exporter of electricity within the group, accounting for about 70 percent of total electricity transfers, followed by Ivory Coast, which accounts for 25 percent of these exports. Because of the lack of infrastructure in the West African Power Pool, however, the electricity traded among these countries represents a small portion of their generation capacity and consumption.

The lack of existing connections among West African national power grids is a great obstacle to increased electricity trading.

Complicating matters, political wrangling in Nigeria has limited the expansion of domestic electricity generation. Nigeria has recently undertaken extensive restructuring and privatization campaigns to make the power sector profitable and thus better positioned to attract the foreign investment necessary to expand generation capacity. The multiple political controversies Jonathan has faced, however, and the approaching 2015 national elections make policy changes difficult to implement. The problem is exacerbated by the controversy already surrounding power deregulation.

The lack of existing connections among West African national power grids is a great obstacle to increased electricity trading and to the resulting beneficial effects of gridwide stability. The West African Power Pool is thus heavily focused on regional infrastructure development, rather than the trading mechanisms themselves. The eventual goal, the same as any power pool, is to set up a regional trading mechanism that would facilitate the procedures to transfer electricity, thus addressing short-term local shortfalls. But in West Africa, regional transmission and generation infrastructure simply have not evolved enough to support this. Power trading between West African Power Pool member states continues to be based on bilateral and multilateral agreements rather than unified pool trading.

Nigeria does not depend on fuel imports for the bulk of its electricity generation, and it is the main electricity-exporting country in West Africa. That said, power generation in the country still falls short of demand, resulting in load shedding and blackouts. Nigeria recently privatized the Power Holding Company of Nigeria, hoping the move would generate greater investment in infrastructure development and, as a result, increase domestic power production. Facing its own shortfalls, Nigeria is not able to translate its large natural gas-fired electricity production base into a regional abundance of electricity, leaving much of West Africa to rely on fuel oils for electricity generation. These fuel oils may be logistically easier to pull together, but they come with a higher price tag. Some parts of West Africa even have their own isolated and limited power grids. For instance, the uranium mining area of Niger has its own power production — a system based on coal-fired plants supplied by local coal mining facilities with the sole purpose of fueling uranium-mining operations.

As the West African Power Pool continues to move toward further development, increasing transmission capabilities will likely be the main focus of securing investment and developing infrastructure. Countries will also seek to increase their own power generation capacity, and ongoing privatization efforts may lead to higher cost efficiency over time. Apart from Nigeria, other countries in West Africa will also push to develop their offshore oil and natural gas deposits. This will lead to some of the natural gas being fed back inland for power generation. West Africa is probably still far from having an effective, regionwide electricity trading pool that operates across the region. Serious infrastructure challenges will need to be resolved before a physical transmission grid could enable the development of trading mechanisms.

This is the first installment in a three-part series looking at sub-Saharan Africa's electricity generation and transmission capabilities and analyzing opportunities for growth.