The Problem With Our Maps

Stratfor's view of the world is underpinned by geography, an intractable constant that even the staunchest leaders ignore at their peril. Our perception of geography — be it human or physical — is inevitably shaped by representative data, often conveyed using maps. Our understanding of map-based data is, however, a little skewed, something our friends at Visual Capitalist show succinctly with their breakdown of the Mercator projection.

By Nick Routley for Visual Capitalist

Maps shape our understanding of the world – and in an increasingly interconnected and global economy, this geographic knowledge is more important than ever.

The funny thing is, almost everyone actually has a skewed perception of the true size of countries thanks to a cartographic technique called the Mercator projection. Used just about everywhere, from textbooks to Google Maps, the Mercator projection map is the way most of humanity recognizes the position and size of Earth’s continents. 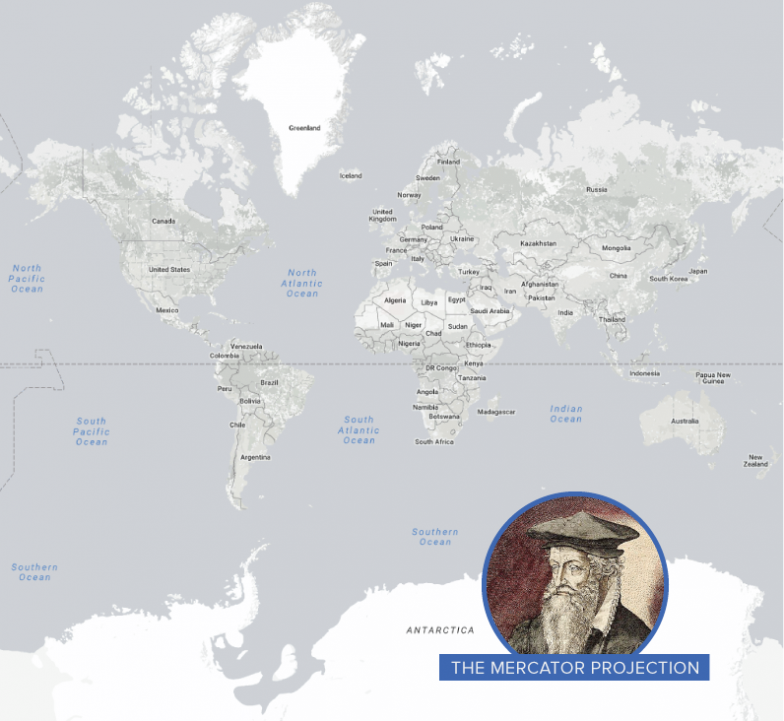 In 1569, the great cartographer, Gerardus Mercator, created a revolutionary new map based on a cylindrical projection. The new map was well-suited to nautical navigation since every line on the sphere is a constant course, or loxodrome. In modern times, this is particularly useful since the Earth can be depicted as seamless in online mapping applications.

That said, the true sizes of landmasses become increasingly distorted the further away from the equator they get. Mercator’s map inadvertently pumps up the sizes of Europe and North America. Visually speaking, Canada and Russia appear to take up approximately 25% of the Earth’s landmass, when in reality they occupy a mere 5%. When Antarctica is excluded (as it often is), Canada and Russia’s visual share of landmass jumps to about 40%!

Canada is the second largest country in the world, but not by much. Here is an “at scale” look at Canada, the United States, and Mexico.

Africa, South Asia, and South America all appear much smaller in relation to countries further from the equator.

And from a North American perspective, countries such as Australia and Indonesia appear much smaller than they actually are. Comparing the landmasses on the same latitude as Canada helps put sizes into perspective. 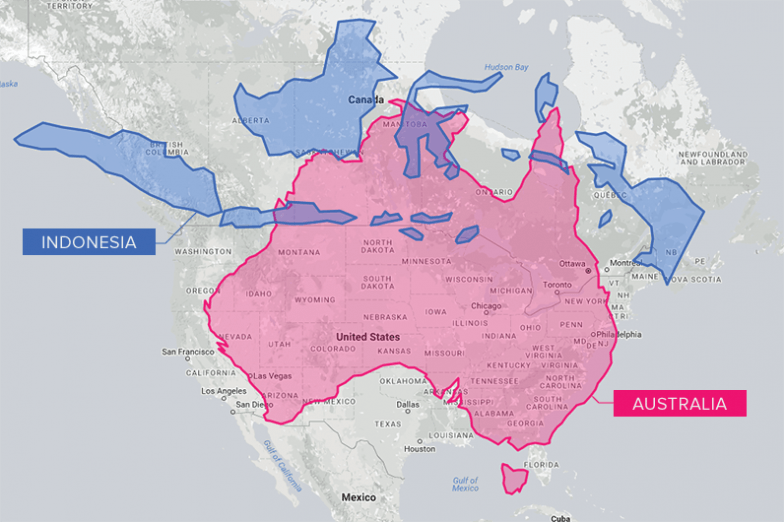 Greenland is the world’s largest island, but looking at its hyper-exaggerated depiction in the map below, you’d be forgiven for wondering why it isn’t a stand-alone continent. In reality, Greenland is about fourteen times smaller than Africa. 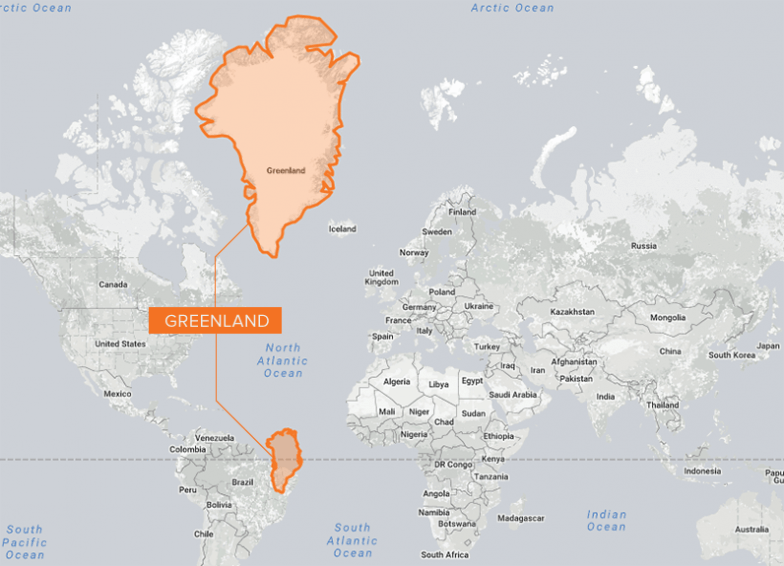 Though Mercator’s map was never intended for use as the default wall map in schools around the world, it has shaped the worldviews of billions of people. Critics of the map – and similar projections – suggest that distortion reinforces a sense of colonialist superiority. As well, the amount of territory a country occupies is often correlated with power and access to natural resources, and map distortions can have the effect of inadvertently diminishing nations closer to the equator.

A prime example of this argument is the “True Size of Africa” graphic, which demonstrated to millions of people just how big the continent is. 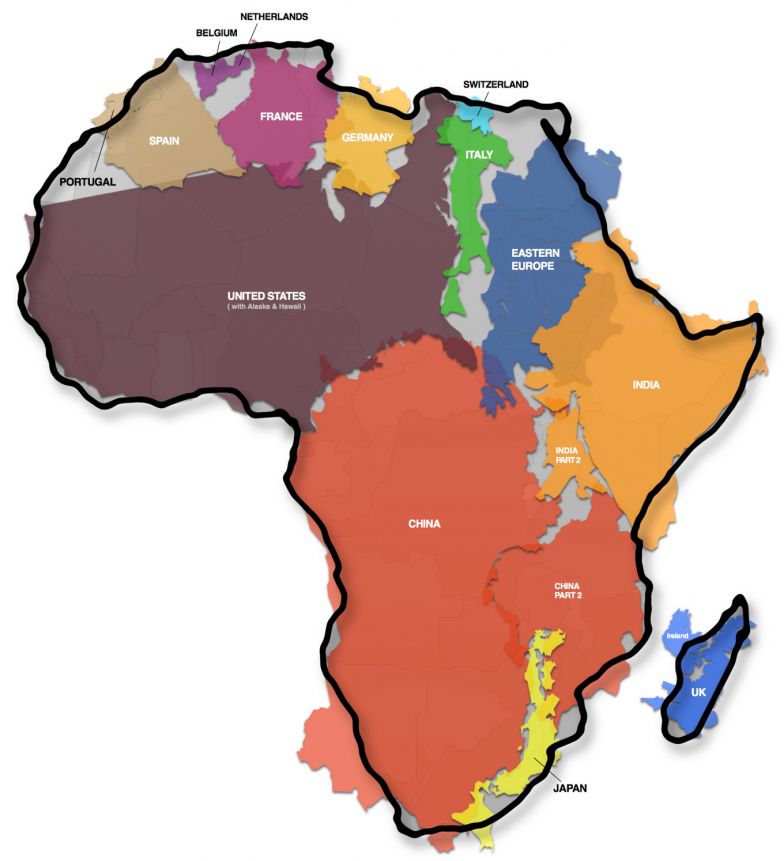 Growing awareness of map distortion is translating into concrete change. Boston public schools, for example, recently switched to the Gall-Peters projection, which more accurately depicts the true size of landmasses. 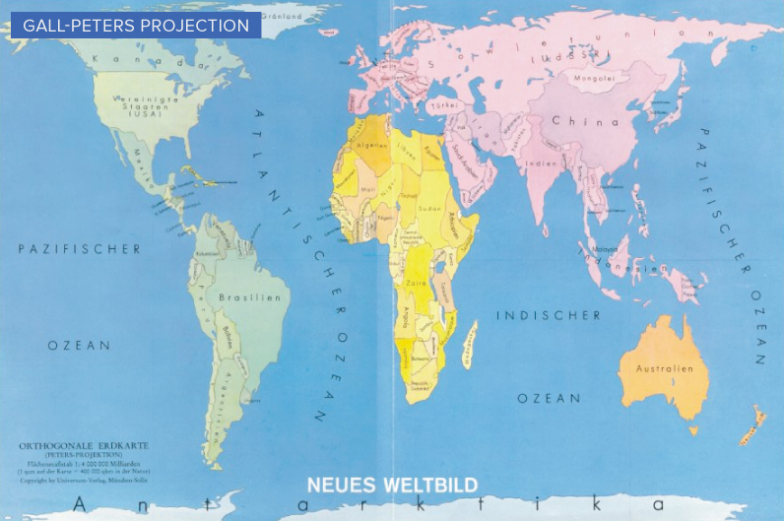 "In our society we unconsciously equate size with importance and even power." – Salvatore Natoli, Educational Affairs Director, AAG

THE ROAD TO EQUAL-AREA MAPPING

In 1805, mathematician and astronomer, Karl Mollweide, created a namesake projection that trades accuracy of angles and shape for accuracy of proportion. The Mollweide projection has inspired many other attempts at a user-friendly equal area map. 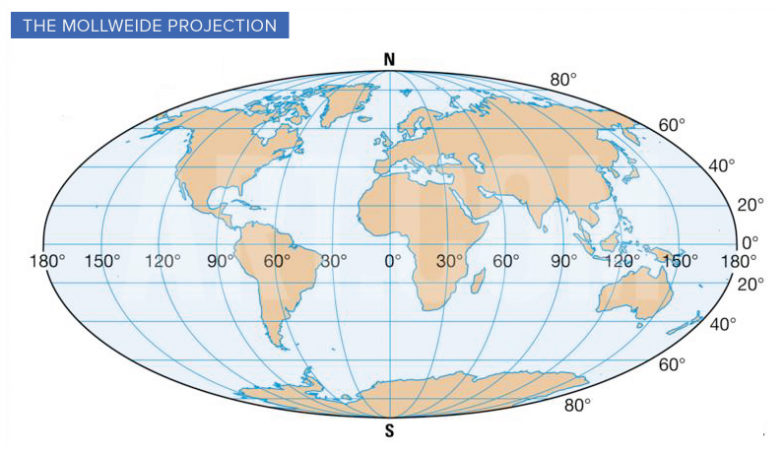 John Paul Goode’s attempt, known as the Goode Homolosine Projection, took this concept a step further by adding interruptions at strategic locations to help reduce the distortion of continents. The resulting shape is sometimes referred to as an “orange peel map”. 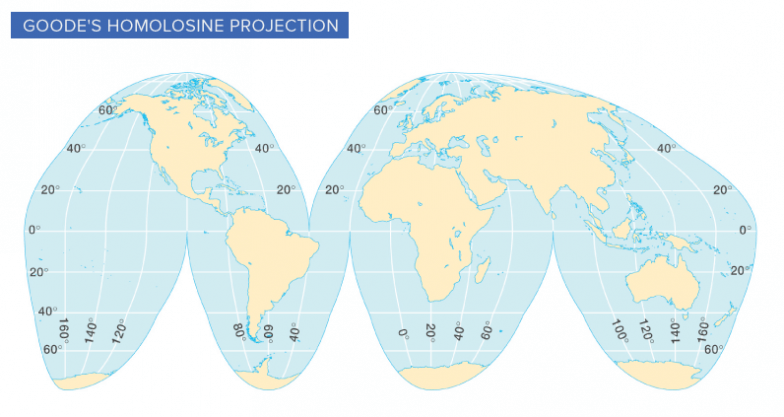 Another evolution in cartography was the Dymaxion map, invented by Buckminster Fuller and patented in 1946. In this version, the continents are no longer in their familiar positions – however, there is more spacial fidelity than in previous projection methods. We’re able to see the true proportions of Africa, Northern Canada, Antarctica, and other distortion hot spots.

The Dymaxion map wasn’t created for purely practical purposes. Fuller believed that humans would be better equipped to address global challenges if they were given a way to visualize the Earth’s continents in a contiguous manner. 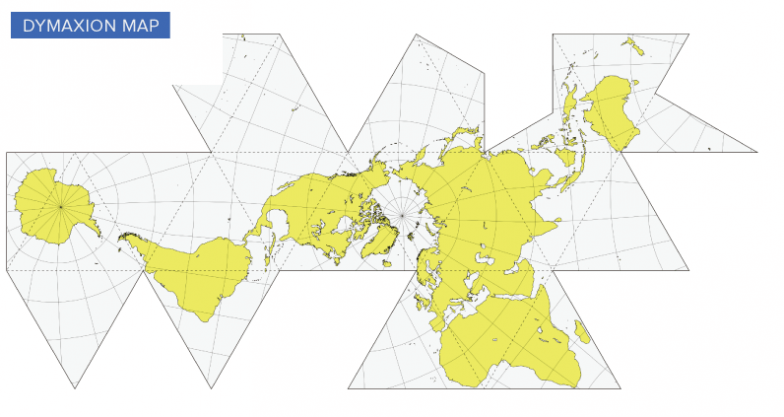 Using a new map-making method called AuthaGraph, Japanese architect, Hajime Narukawa, may have created the most accurate map of the world yet. AuthaGraph divides the globe into 96 triangles, transfers them to a tetrahedron and unfolds into a rectangle.

The end result? Landmasses and seas are more accurately proportioned than in traditional projections. 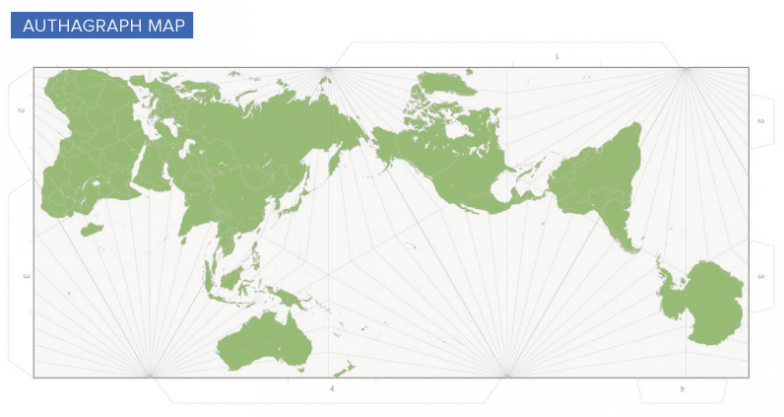 The biggest downfall of the AuthaGraph map is that longitude and latitude lines are no longer a tidy grid. As well, continents on the map are repositioned in a way that will be unfamiliar to a population that is already geographically challenged.

That said, depicting our round world on a flat surface will always come with some trade-offs. As demand grows for a true equal-area map, it will be exciting to see what the next generation of map projections have to offer.