The Problems Foreign Powers Find in the Balkans

Serbian Foreign Minister Ivica Dacic (R) meets his Russian counterpart Sergei Lavrov when he arrives for a visit to Belgrade.

Russia, Turkey and the West all share one rival in the Balkans: political instability. Located at the confluence of three historic empires, the strip of land between the Mediterranean and the Black Sea has long been the focus of competition among global powers. Now it is just one arena in the standoff between Russia and the West. Yet, with both sides attempting to buy influence with investments and energy projects, and with Turkey struggling to keep pace, internal political challenges threaten to undermine outside efforts to develop and shape the region. As major powers use their financial and political clout to gain influence in the Balkans, weak local governments will continue to balance among competing nations.

Strategic Investments From the West

Western governments have two major goals in the Balkans: to maintain stability in the western part of the region and to minimize Russian influence. To that end, the United States and the European Union have been involved in the internal politics of the Balkans since NATO committed troops in the aftermath of the Bosnian war and the conflict in Kosovo in the 1990s. Western troops continue to serve in Kosovo in a peacekeeping capacity. The European Union has used considerable amounts of resources and political capital to bring reform and economic development to the region, but with mixed results.

The West has the advantage of access to ample development and defense funds that can be divided out among countries hungry for economic growth. Countries such as Serbia and Macedonia are unlikely to join the European Union in the next decade; they are held back by internal divisions and face resistance from current EU members. Yet they still have access to the economic benefits that come from close ties with Europe. Between 2014 and 2020, the European Union plans to grant 1.5 billion euros (around $1.7 billion) to Serbia, a prospective EU member, and 11.4 billion euros to Bulgaria, a current EU member. (Bulgarian citizens benefit from the ability to travel freely and work in the European Union.) In addition, there is significant defense assistance coming into Bulgaria as part of an effort to strengthen NATO members along the Russian borderlands.

The Ukraine crisis galvanized the United States into boosting defenses along NATO's eastern edge. NATO has enlarged its multinational response force, created a new spearhead force that can mobilize quickly and established a chain of outposts in the eastern Balkans called force integration units, which could serve as command centers during a conflict.

At the same time, fighting in Ukraine prompted the European Union to prioritize its Southern Corridor natural gas project, which would bypass Russian energy giant Gazprom in the European energy market and reduce Europe's reliance on Russia. In addition, the West strongly discouraged Bulgaria from participating in Russia's South Stream project. When Bulgaria opted out, Russia canceled the project in December. 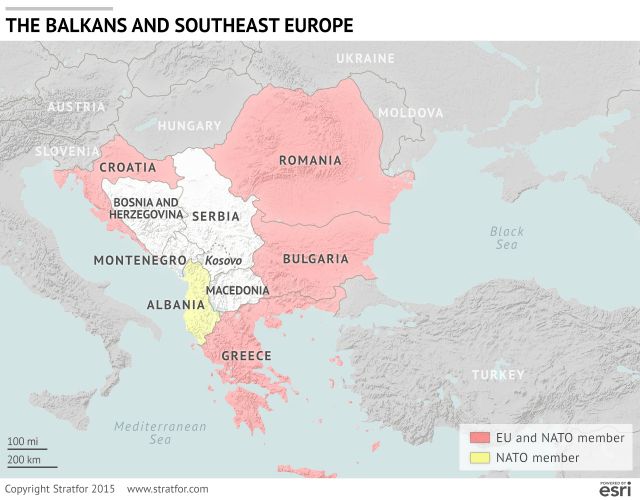 For its part, Russia has used its influence in the Balkans, where it has close historical and cultural ties with countries such as Serbia and Greece, to threaten Western interests. However, the Kremlin's interest in the region in the past year stems in large part from its deteriorating relationship with the West. Russia's goal in the Balkans is to prevent the expansion of Western troops and military infrastructure in the region while maintaining sufficient strength to implement strategic energy infrastructure projects.

Although the West has greater resources to invest in the Balkans, Russia owns several regional energy assets and holds a number of outstanding loans to Balkan governments. Moscow has managed to retain good diplomatic relationships with some local oligarchs, especially in Bulgaria. In 2008, Gazprom bought a majority stake in Serbian oil firm NIS. Like the European Union, Russia has provided funding to Serbia — about $1.5 billion in over the past two years. The Kremlin also sealed energy and loan deals with the Republika Srpska, the ethnic Serb entity in Bosnia-Herzegovina.

Western pressure may have ended the South Stream project, but the pipeline Russia plans to build in its place, Turkish Stream, could help Gazprom counter European energy diversification efforts. The pipeline would bring natural gas across the Black Sea to the Turkey-Greek border. To help Gazprom reach Central European markets, Russia has advocated the construction of a pipeline that would run from Greece to Macedonia, Serbia and Hungary. In addition to Turkey, these four countries are at the center of a Russian diplomatic offensive. Nevertheless, with Russia struggling to manage internal financial and political challenges, its leverage in the Balkans is relatively limited.

Turkey has its own cultural links and economic interests in the Balkans, but it currently lacks the resources and military power to rival Russia or the West.

One of Turkey's strategic objectives is to maintain influence in the Black Sea. Historically, Ankara has achieved this by anchoring itself on the Danube. By extension, this objective entails managing relations with other Black Sea states in the Balkans. But Turkey is also attempting to grow closer to Bosnia-Herzegovina, where Ankara means to enhance its influence through cultural and historical ties. These connections are important: Muslim Bosniaks started migrating to Turkey in the 17th century, and a few million Turkish citizens claim Bosniak roots today. This ethnic affinity has prompted popular government initiatives to invest in Bosnia-Herzegovina.

Turkey cannot match the level of financial investment Western powers and Russia commit to the Balkans. But as the gatekeeper to the Black Sea and as a NATO member, Turkey plays a significant role in Bulgarian and Romanian efforts to boost defense cooperation in response to the crisis in Ukraine. Moreover, Turkey has been able to use financial and political tools to curry favor with Bosnia. Turkey is among the top five investors in the country. In fact, Turkish officials claim that Turkey has invested $1.1 billion in Bosnia since 1995 — a significant sum for a country with a gross domestic product of about $18 billion.

The Turkish Stream pipeline, if built, would no doubt empower Turkey. Ankara would play a central role in its construction, and it would use that role to improve its relationships with countries that would receive Turkish Stream natural gas, including Macedonia and Serbia.

Despite the attention they command from larger powers, the Balkans are often unstable, and their instability can impede the influence of foreign powers. For example, deadly violence erupted in Macedonia on May 9, when Interior Ministry personnel cracked down on alleged ethnic Albanian militants in Kumanovo, culminating in the deaths of eight police officers and 14 alleged militants. Nearly 40 policemen were injured and 30 militants were arrested. There are also unconfirmed reports of civilian casualties.

The Macedonian government argued that its operation in the town was to prevent militants from carrying out planned terror attacks inside the country. However, the timing of the operation led many to believe the crackdown was politically motivated — a distraction that could divert attention from a recently discovered illegal government wiretapping program.

The bloodshed in Kumanovo, coupled with revelations of the illegal acquisition of information of citizens, further undermines the credibility of a government that is already distrusted by its people. On May 17, tens of thousands of protesters gathered in Macedonia's capital city, Skopje. Western-sponsored talks the following day failed to bring about a compromise between the government and opposition parties, and the government's hold on power remains tenuous.

Russia is counting on running its extension of Turkish Stream through Macedonia into Central Europe, but the country's instability threatens to derail these plans at a time when countries along alternative routes are not receptive to Russian proposals. The incumbent Bulgarian government, under pressure from the United States and the European Union, is opposed to participation in a Russia-led energy project, while Albania retains a pro-Western foreign policy orientation.

With so much at stake, the Russian Foreign Ministry came out forcefully in support of the Macedonian government in response to the protests. The ministry criticized opposition parties and non-governmental groups alike, accusing them of being in league with Western powers and choosing to follow a chaotic "color revolution" ideology. Macedonia's incumbent government is nominally in favor of NATO and EU accession but has been open to Russia's Turkish Stream proposals. A weak government, as well as growing instability in Macedonia, is preventing the country from becoming a staunch Western ally or a reliable partner for Russia.

Clashes in Macedonia raise the specter of renewed ethnic tension and violence in the Balkans, where political borders do not coincide with ethnic boundaries. Though recent violence probably will not spill over into nearby countries in the immediate future, Macedonia's problems are a concern in the region. Serbia raised its combat alert status, and Bulgaria sent troops to reinforce the border.

Since 1999, Western governments have worked to stabilize Kosovo and the surrounding area through the presence of peacekeepers and large-scale development programs. Brussels is also pressuring Serbia to normalize relations with Kosovo as a precondition for EU accession. A potential increase in militancy along the Kosovo-Macedonia border would threaten this stability and undermine the West's long-standing efforts in the region.

Ultimately, no matter how much time and external political power is invested in the Balkans, success depends on the presence of strong, stable governance. But Balkan governments are notoriously weak. In Bulgaria, social unrest in 2013 forced the government to resign. Since then, the country has gone through several weak, short-lived governments that have been beset by internal disputes. Meanwhile in Bosnia-Herzegovina, political paralysis has prevented the introduction of much-needed economic and political reform. Protests over corruption in 2014 highlighted the Bosnian political system's inability to address the country's inherent problems.

The tumult of Balkan politics enables foreign powers to make certain inroads, boosting their influence through financial and political support for local governments. But the fragility of Balkan states prevents them from swinging decisively toward one outside power. Like other nations in Europe's borderlands, many of the Balkan countries have attempted to retain a degree of neutrality. A balancing strategy means that Balkan governments can access advantageous economic agreements, financial assistance packages and political support from multiple external powers.

Geopolitical rivalries and local disputes in the region have historically formed an explosive combination, fueling military conflicts like World War I as well as numerous Balkan armed struggles. Today, a more nuanced competition is taking place as foreign powers use economic influence, defense cooperation, and political support to further their goals in the region.

The conflict in Macedonia — and the potential it has to upset Russia's plans in the region — embodies the problems foreign powers find in the Balkans. While the West, Russia and Turkey are all eager to pump capital into the region for their own betterment, weak governments will continue balancing among outside powers.