Mexican police shows to the press drug and weapons seized to Jaime Herrera Herrera, aka "JH" or "El Viejito" and Felipe Naranjo Sevilla, alleged members of the Pacific drug cartel (led by Joaquin Guzman Loera, aka "El Chapo Guzman), presented to the press on February 14, 2012, in Mexico City.

Editor's Note: On July 17 in a U.S. federal court sentenced Joaquin "El Chapo" Guzman Loera, the former head of the Sinaloa Federation cartel, to life in prison after his drug, money laundering and murder convictions. In light of the sentence, Stratfor is featuring our past coverage of one of Mexico's most notorious drug lords.

A widely propagated myth would have us believe that Mexican drug lord Joaquin "El Chapo" Guzman Loera and his Sinaloa Federation are less violent than many of their competitors. Statements from journalists and analysts allege that Sinaloa is more businesslike than Los Zetas, whose reputation for brutality is well-documented, and that this business savvy somehow renders the group relatively benign. In turn, this has led many to believe that the Mexican government could broker a deal with the leader of one of Mexico's largest criminal organizations.

However, a close examination of Sinaloa's evolution demonstrates the group is hardly the hallmark of civility. In fact, the history of Mexico's cartel wars over the past decade reveals that Guzman, his Sinaloa Federation and the various cartels with which they partner have been more territorially aggressive than any other Mexican cartel.

Sinaloa incursions upset the balance of power that Miguel Angel "El Padrino" Felix Gallardo established in the late 1980s when he appropriated criminal territories to Guzman and his other lieutenants. Tens of thousands of people have died from the wars that arose from this imbalance.

This is because Guzman's expansion efforts necessarily entailed encroaching on a rival's turf. In the early 1990s, he sent forces from Sinaloa state into Tijuana, Baja California state — controlled at the time by the Arellano Felix brothers — to buy stash houses and construct a tunnel for moving drugs across the border. In response, the brothers tortured and killed Sinaloa operatives in Tijuana; they even tried to assassinate Guzman. Sinaloa retaliated in November 1992, when its operatives tried to kill Francisco Javier and Ramon Arellano Felix in a Puerto Vallarta nightclub.

The Sinaloa-Arellano Felix brothers war marked the beginning of an escalation in Mexico's cartel war. Cartels began to hire police officers to work as enforcers. Eventually, the Gulf cartel formed Los Zetas, a group largely composed of former soldiers from Mexican Airmobile Special Forces. Cartel warfare thus was militarized. Enforcer groups were no longer untrained thugs with guns; they were trained fire teams that knew how to maneuver and use their weapons.

Seeking shelter from the Arellano Felix brothers, Guzman fled to Guatemala but was arrested in June of 1993. He was extradited to Mexico, where he continued to run his criminal enterprises from the safety of a prison cell until he escaped in January 2001. 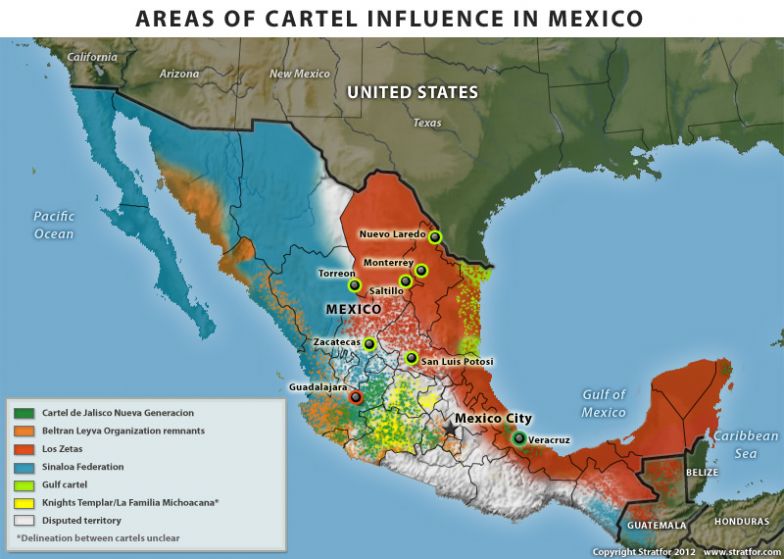 When Gulf cartel leader Osiel Cardenas Guillen was arrested in March 2003, Guzman saw an opportunity to make a move on the Gulf cartel's territory, especially the lucrative plaza of Nuevo Laredo, the busiest point of entry for trucks into the United States from Mexico that provides direct access to the Interstate Highway 35 corridor.

Los Zetas responded strongly to the Sinaloa incursion into Nuevo Laredo and a bloody struggle erupted for control of the city. By mid-2005, law and order had almost completely broken down in Nuevo Laredo, and then-President Vicente Fox deployed federal police and army units to take control of the town. But even these forces proved insufficient to stop the violence, which persisted for three years until it became evident that Los Zetas were not going to be defeated. By that time, Guzman had begun focusing on other places to expand.

A Boss of Many Groups

On Sept. 11, 2004, Sinaloa hit men gunned down Rodolfo Carrillo Fuentes, a leader of the Vicente Carrillo Fuentes organization, also known as the Juarez cartel, as he left a theater in Culiacan, Sinaloa state. Rodolfo's brother Vicente retaliated by having Guzman's brother murdered in prison. This chain of events set off a war between the two organizations for control of the Juarez and Chihuahua City plazas that continues to this day. (While the Juarez cartel is just a shadow of its former self — Sinaloa has all but consolidated control of Chihuahua state — Chihuahua nonetheless remains the second-deadliest state in Mexico because of this struggle.)

Sinaloa meanwhile had resumed its efforts to control Tijuana. A string of arrests and the deaths of the Arellano Felix brothers, who constituted the core leadership of the Arellano Felix Organization, severely degraded the group's operational capability. In early 2008, internal fighting between the faction loyal to the Arellano Felix brothers' successor, Luis Fernando "El Ingeniero" Sanchez Arellano, and those loyal to the group's top enforcer, Teodoro "El Teo" Garcia Simental, further degraded the organization. This conflict sparked marked levels of violence in the region until Mexican federal police dismantled the Garcia faction.

Desperate for support against Sanchez Arellano, Garcia sought protection from the Sinaloa Federation, which he knew had been trying to claim Tijuana for years. Ultimately the strategy failed, but the protracted battle left the Sanchez Arellano faction of the AFO extremely weak. In the latter half of 2010, the Sinaloa Federation used the opening afforded by Garcia to solidify control over parts of western Baja California state, namely the Tecate and Mexicali regions, positioning itself to seize Tijuana.

Knowing it could not withstand another lengthy battle against a much larger and resourceful group, the AFO struck a deal with Sinaloa whereby both groups would operate independently and abide by a non-aggression pact. With Tijuana secured, Sinaloa controlled the plazas from Juarez west to Tijuana.

In a similar scenario, the Gulf cartel turned to Sinaloa and La Familia Michoacana for help against Los Zetas, which had broken off from its parent group in early 2010. The three groups formed an alliance that referred to itself as the New Federation. Guzman's attention once again was drawn to the lucrative smuggling corridors in the northeast. With help from Sinaloa and La Familia Michoacana gunmen, the Gulf cartel was able to push Los Zetas out of Reynosa, and by mid-2010, Los Zetas were under heavy pressure from the forces of the New Federation. However, several events that year, including the July 29 death of Guzman's close ally, Ignacio "El Nacho" Coronel, and the Dec. 10 death of La Familia Michoacana leader Nazario "El Mas Loco" Moreno Gonzalez, gave Los Zetas an opportunity to recover.

In 2011, Sinaloa undertook another major incursion into Los Zetas territory, this time targeting Veracruz. In doing so, it used another proxy group as muscle — the Cartel de Jalisco Nueva Generacion, comprising the remnants of Coronel's organization that traveled across Mexico from their home turf in Guadalajara. Sometimes operating under the moniker Los Matazetas, the CJNG began killing Los Zetas — and people it believed to be Los Zetas supporters — in Veracruz. In late September and early October of 2011, the CJNG conducted several high-profile body dumps of individuals deemed Los Zetas. In one incident on Sept. 20, 2011, 35 bodies were dumped on a street in heavy traffic. It was later determined that most of these victims were not members of Los Zetas.

As the CJNG shows, the Sinaloa cartel has formed several enforcer groups over the past decade. These groups have included Los Negros, the CJNG, La Gente Nueva (also known as Los Chapos) and Los Antrax. Such organizations operate under their own names, just as Los Zetas did when they were the armed wing of the Gulf cartel. But like Los Zetas, who acted on behalf on the Gulf cartel, Sinaloa enforcers act at the behest of Guzman and his lieutenants.

Instances of Sinaloa brutality abound. Los Negros leader Valdez tortured and executed four Los Zetas members in a video sent to the Dallas Morning News; the CJNG dumped 35 bodies in downtown Veracruz; and Sinaloa enforcers left groups of dismembered bodies in Nuevo Laredo accompanied by narcomantas signed "El Chapo" on several occasions between March and May of 2012. These are actions of the Sinaloa cartel, and they are every bit as vicious as the actions of other groups.

Some believe that peace ensues once the Sinaloa cartel asserts its control over an area, but that is not necessarily true. Violence decreased in Juarez after Sinaloa wrested control of the plaza, but Chihuahua continues to struggle with violence. In fact, three of the four most violent states in Mexico — Chihuahua, Sinaloa and Guerrero — are in Sinaloa's area of control. There are no quick solutions to Mexico's violence, and there is no reason to believe a government pact with Guzman would prove otherwise.