The Refugee Crisis: What Europe Can Learn From the Past

Portuguese workmen set off to France from London to look for employment in June 1917. European history is replete with migrant flows, some of which offer lessons in what to expect from the current refugee crisis.

In recent weeks, the massive arrival of asylum seekers opened a debate about the economic and political repercussions of immigration in Europe. The discussion is not entirely new. Traditionally, migrations in and out of Europe have shaped the Continent. Merchants, artists and intellectuals moved between European countries to practice their trade. British, Dutch, Germans and Swedes also immigrated to the United States, while Spaniards and Italians sought South America. Europe has had its fair share of population displacements as well: Russians moved to Western Europe after the Bolshevik revolution, and Greece and Turkey exchanged parts of their populations after World War I.

Many displaced peoples were forced to resettle in the decades following World War II, creating even more intra-European migrations. Many ethnic Germans living in Central and Eastern Europe were expelled from their homes in retaliation for the war. While reliable numbers are hard to find, by the early 1950s almost 8 million ethnic Germans had moved into Western Germany, while some 3.5 million had moved into Eastern Germany. Also after the war, hundreds of thousands of southern Europeans emigrated to Northern Europe and the Americas to escape poverty and unemployment.

By the 1950s and 1960s, decolonization had resulted in people from Africa, the Middle East and Southeast Asia moving to their former colonial powers, creating demographic change in Europe. In many cases, European countries actually encouraged this movement, because immigrants were needed to bolster the workforce of a rapidly growing European economy.

But this golden era of the "guest workers" programs had one underlying issue: The policies were based on the assumption that the migrants would eventually return home. Most of these programs subsequently ended with the economic downturn that followed the oil crises of the early 1970s. However, migrants still continued to flow into Europe thanks to family reunification policies, Turkish families moving to Germany probably being the most distinct example.

The early 1990s were again a time of European migration, with Germany once more at the center of the process. The fall of the Berlin Wall enabled ethnic Germans living in Eastern Europe and the former Soviet Union to move to the reunified Germany, and people from the former East Germany move to the more developed West Germany. The 1990s were later marked by the collapse of Yugoslavia and the ethnic conflicts that followed, which forced even more people to seek Western Europe.

And in the 2000s, two events shaped migration to Europe. The first was the European Union's enlargement to the east, which allowed citizens from countries in the former Communist bloc to legally work in Western Europe. The second was the financial crisis, which encouraged hundreds of thousands of Portuguese, Spanish, Irish and Greeks to immigrate to Germany, the United Kingdom and other wealthy economies in the north.

Signs From the Past

The current migration flow into Europe is somewhat different from those of the past. Unlike the litany of previous population movements, this one involves a combination of asylum seekers from Syria, Iraq and Afghanistan and economic migrants from sub-Saharan Africa and the Balkans, most of whom arrive in Europe by land or sea. Many of these migrants endure long and dangerous trips from their countries of origin.

The predicament has laid bare the shortcomings of EU migration policies.

To an extent, it resembles the displacement of ethnic Germans and people from the former Yugoslavia because many of the migrants are fleeing war and ethnic persecution. It also partially resembles the decolonization process because it mostly involves non-Europeans. But the current migration flow differs from the others in the sense that it is chaotic and massive, and it affects multiple countries in different ways. Whether Europe should have been prepared for this migration influx is irrelevant at this point. Simply put, the European Union has been overwhelmed by the events.

The predicament has laid bare the shortcomings of EU migration policies because countries in the bloc's external borders had to deal with an influx of people they were not prepared to handle. It has also threatened the principle of free movement of people in the bloc; several countries reintroduced border controls to disrupt the migration routes. Finally, it deepened the Continent's already serious political divisions. The debate over measures to address the crisis revealed different approaches among member states, and a plan to relocate asylum seekers across the Continent was approved only after Berlin and Brussels threatened to introduce punitive measures on countries deciding not to participate.

Still, while this refugee crisis is unique in many aspects, previous migration experiences offer some indications of how it could affect Europe. First, the process of integrating foreigners remains problematic for European nations. In most Western European countries, migrant workers tend to be disproportionally represented in the bottom segments of the national earnings distribution. Eurostat data also shows that in most EU countries, unemployment rates are higher among migrants. Both disadvantages are particularly pronounced among non-European immigrants — a key aspect to keep in mind considering the backgrounds of the men and women currently arriving in Europe. 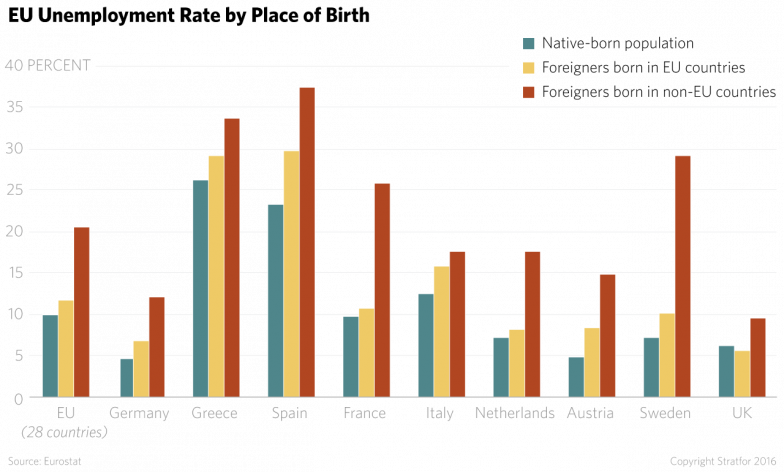 For example, a recent report by Germany's Interior Ministry shows that the unemployment rate among workers with an immigrant background is almost twice as high as that among the non-immigrant population. The same report says young foreigners are less successful in school than their German peers, which makes finding jobs more difficult. This suggests that in many cases there is a perpetuation of the disadvantage between foreigners and locals; the children of immigrant families encounter problems similar to those of their parents in trying to enter the workforce. 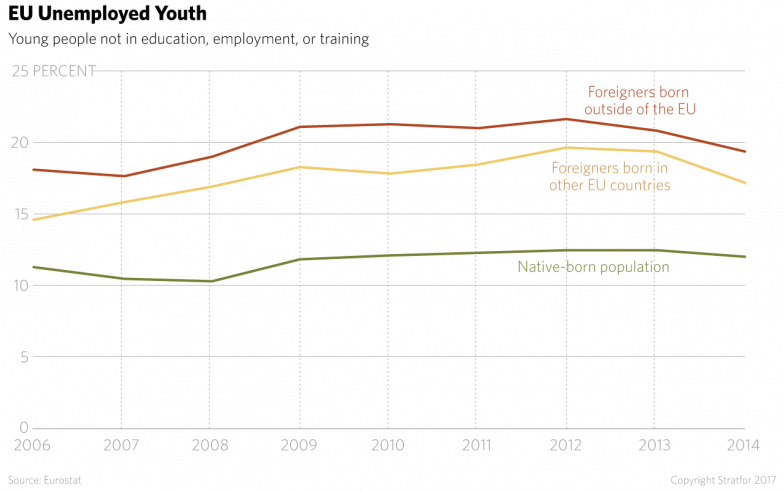 Second, migration flows generally produce political and social reactions in the receiving countries. In the United Kingdom, for example, the arrival of Central and Eastern European workers (mostly Polish) in the mid-2000s contributed to the electoral rise of the anti-immigration UKIP party. Though the British electoral system prevented UKIP from winning a significant representation in the British Parliament, the party's popularity influenced the behavior of the Conservative Party government, which introduced reforms to make it harder for foreigners to access welfare benefits. This is also one of London's priorities for EU reform.

France is another clear example of a country where the constant influx of non-European immigrants combined with the failure to integrate them completely leads to discontent among both immigrants and the receiving population. The French riots of 2005 and 2009 and the electoral rise of the right-wing National Front are symptomatic of the social tensions created by decades of migration from former French colonies.

Even Sweden, a country famous for its tolerance for immigrants, experienced disturbances when violence broke out in a Stockholm suburb where a relatively large group of immigrant residents lived in 2013. The Swedish justice minister was blunt in her explanation of the causes of the riots; she said that "social segregation" was to blame. Thus local populations are just as likely to react to rising immigration. Norway's intelligence service even went so far as to say the biggest risk posed by the influx of migrants was a violent reaction from far-right groups rather than Islamists infiltrating the country.

Third, previous migrations show that the movement of people affects demographics. As life expectancy improves and fertility rates drop, most populations in European countries are aging and shrinking, which will reduce the size of their workforces in the coming decades. These changes will in turn create fiscal challenges for these countries as they are forced to spend more in pensions and health care.

Immigration is not an antidote to demographic change.

On the surface, immigration looks like a good way of mitigating the process of demographic change. If a country cannot produce enough workers domestically, it may as well import them. There is some truth to this. However, France and the United Kingdom, which have some of the highest fertility rates in Europe and populations that will continue to grow during this century while the overall EU population is expected to begin to decline by the 2050s, are still two of Europe's main destinations for immigrants. This partially explains why Germany, the country with the lowest fertility rate in the European Union, was so enthusiastic to receive immigrants during the early stages of the refugee crisis, while the United Kingdom refused to participate in the EU plan to accept more migrants.

But immigration is not an antidote to demographic change. First, fertility rates are dropping across the board, even among immigrant families. Second, decisions that may make sense economically are often not viable politically. Countries in Central and Eastern Europe, which in the coming decades will face serious problems because of low fertility rates and high levels of emigration, were critical of the EU plan to relocate migrants. These are relatively homogeneous societies where many locals feel that a spike in immigration would threaten their national identity.

Finally, migrants tend to go where jobs are available and migration policies are friendly. This fact will undermine any EU efforts to introduce one-size-fits-all policies such as the automatic relocation of migrants. If a migrant wants to go to Austria, there is little the European Union can do to keep him or her in Romania. If Germany allows refugees to work three months after they arrive in the country while France makes them wait for a year, it is only natural that migrants will continue to choose Germany over France. And as long as Sweden offers friendlier asylum legislation than Denmark, the former will be a destination country where the latter will be a transit country for asylum seekers.

Over the past few weeks, the European Union has changed its approach to the migration crisis. The bloc's immediate reaction focused on how to host an increasing number of foreigners, but its attention rapidly changed to how to prevent them from entering the Continent. EU leaders recently announced more financial aid for countries in the Middle East and Africa, and the bloc's naval operation in the Mediterranean will soon start boarding and seizing vessels in international waters. These are only palliative measures that will have a limited effect.

Since the beginning of the crisis, many European politicians have suggested that the European Union should emulate Australia, which intercepts migrants arriving by boat and sends them to detention centers on island nations in the Pacific Ocean. But Australia is both an island continent and a nation-state, and Europe is neither of those things. Europe is geographically and historically linked to the Middle East and North Africa, and the movement of people between the two will not stop any time soon. The European Union is also a club of nation-states where global solutions are elusive and often counterproductive.

In the months ahead, the European Union is likely to harden its resolve to stem immigration, taking steps to consolidate the so-called Fortress Europe. But this position will have little meaning without additional measures to integrate those who have already arrived and those who will undoubtedly arrive in the future.