A Repeat of the Plaza Accord

U.S. President Donald Trump (L) and Treasury Secretary Steven Mnuchin at a meeting on the federal budget in February. If the dollar resumes its dizzying ascent, Washington may look to coordinate a multilateral intervention.

The value of the U.S. dollar has risen rapidly over the past three years, up 26 percent since summer 2014. First, a divergence between the expected interest rates of the U.S. Federal Reserve and those of the world's other central banks, namely the Bank of Japan and the European Central Bank, brought capital flooding into the United States. Two years later, Donald Trump's election to the U.S. presidency gave the dollar another boost. And if his proposed tax reform package and infrastructure spending plan turn out to be as ambitious as Trump has promised, the dollar's value may well keep on rising. A surging dollar, however, would have distinct drawbacks for the Trump administration, undermining the president's stated goal to reduce the United States' trade deficit. In fact, Trump has said the dollar is already too strong, and his economic team has accused other countries of undervaluing their currencies.

Since January, the dollar's rise has slowed a bit, in part because of Trump's criticism and in part because of questions about his fiscal plan. But if the greenback resumes its dizzying ascent, the U.S. government may start looking at ways to rein it in. The Trump administration's first resort would probably be a unilateral intervention. After all, currency decisions are left up to the secretary of the Treasury, who reports directly to the president — unlike monetary policy, which is the purview of the independent Fed system. The Treasury could print more dollars and use them to buy foreign currencies, a strategy that would drive the dollar's value down, at least at first. The academic literature on the matter suggests, however, that the approach would not yield lasting results. A longer-lasting move would be to coordinate a multilateral intervention, a technique that has fallen out of fashion in the past two decades. The global economy undertook such an initiative most famously in 1985, when the United States, Japan, West Germany, France and the United Kingdom signed the Plaza Accord. And though the economic parallels between then and now might inspire the U.S. government to try to orchestrate a modern-day Plaza Accord, the task would be far more difficult today than it was the first time around.

When Ronald Reagan assumed the presidency in 1981, the U.S. economy was moribund. To revive it, he introduced tax cuts and a deregulation campaign, while Fed Chairman Paul Volcker took interest rates to unprecedented heights in an effort to beat back inflation. The result was a staggering 45 percent rise in the dollar's value from 1980 to 1985. The dollar's might prompted talk of protectionist measures in Congress, which, in turn, encouraged the United States' main trade partners to come together in September 1985 at New York's Plaza Hotel to negotiate a joint solution with the United States. During the meeting, the central banks of the five countries involved agreed to coordinate interventions in the currency markets until the dollar had depreciated by 10 percent. And so the Plaza Accord was born.

The deal was a huge success. The dollar fell further than its 10 percent target — so low, in fact, that the accord's signatories had to reconvene two years later to sign the 1987 Louvre Accord to try to stabilize currency values. But the agreement also produced some unexpected side effects. In Japan, the yen appreciated swiftly as the dollar fell, causing the Bank of Japan to lower interest rates. Though the stronger yen kept a lid on inflation, the interest rate cuts gave rise to a speculative asset bubble. Then, when the bubble burst in the early 1990s, Japan fell into a decadeslong economic malaise from which it has yet to emerge. (The turn of events led some people in Asia to conclude that the Plaza Accord was a U.S. conspiracy to sabotage Japan's economy, then the world's fastest-growing economy.)

A few more concerted currency interventions took place in the years that followed, but the practice fell out of favor after 1995. Since then, the world's largest central banks have tinkered with the markets together only in extreme circumstances, such as when the fledgling euro needed support in 2000 or when the yen was strengthening too quickly after the 2011 Fukushima disaster. Then in 2013 the U.S. Treasury, trying to discourage future currency manipulation, persuaded fellow members of the G-7 — which comprises the Plaza Accord signatories plus Italy and Canada — to sign an agreement to refrain from unilateral interventions. If the dollar's value keeps climbing in defiance of the president's wishes, though, the U.S. administration may be tempted to reconsider these options. 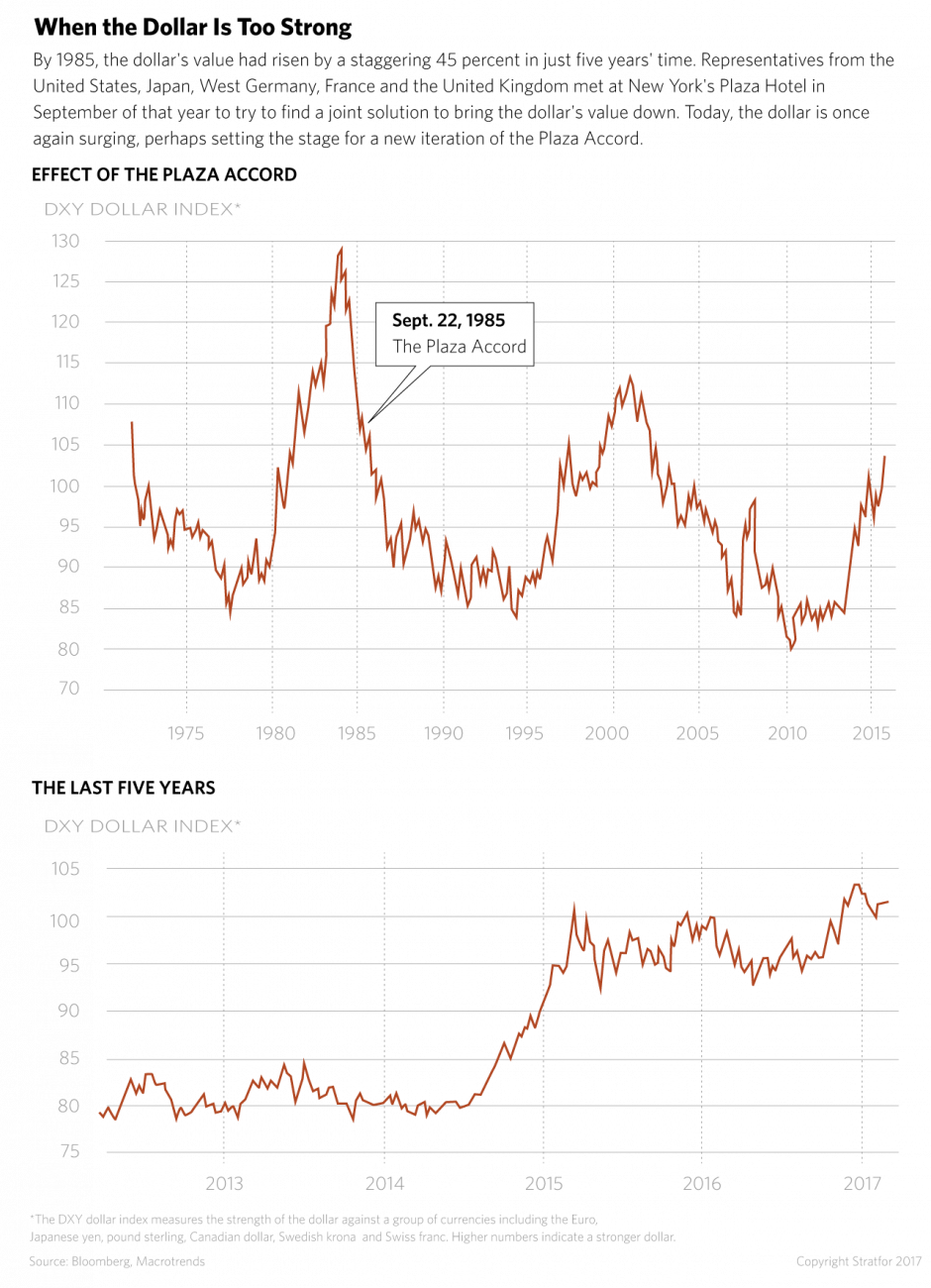 An attempt to resurrect the multilateral intervention model would run up against considerable obstacles. The Trump administration would have a much harder time convincing its counterparts around the world of the need to stage an intervention than the Reagan administration did. In 1985, there was little doubt that the dollar was overvalued: Even though the Japanese and German economies were growing faster than that of the United States, the dollar kept getting stronger relative to the yen and deutsche mark. Its growth could only be the result of a market overshoot that needed correcting. Today, by contrast, the dollar's strength is largely due to a mismatch in monetary cycles. Since the United States pulled out of its economic recession more quickly than did Europe or Japan in the wake of the 2008 financial crisis, it got a head start on tightening its monetary policy. An independent observer could easily judge that the dollar's strength today is not the product of overvaluation but simply a reflection of the United States' economic situation. Consequently, a multilateral intervention to even the playing field would be a tough sell. And if it were to happen, it would have a lower chance of succeeding. History has shown that when central banks try to alter the markets' natural course, the markets prevail.

The geopolitical climate is also much different today than it was when the Plaza Accord was signed. In 1985, the Cold War was still underway. Japan and West Germany were still part of a grand alliance with the United States against the Soviet Union, and they still depended on Washington for much of their protection and everyday functions. So when Washington proposed coordinating currencies, they were motivated to sign on with the idea. Today, the world's largest liberal economies no longer have a single adversary to unite against. Germany, now unified, is the leader of the European Union, a bloc that was created in part to give the United States a worthy economic competitor. Furthermore, it is a member of the eurozone, meaning that any currency agreement would have to include all 19 countries in the monetary union. Japan's leaders, meanwhile, are pursuing reforms that would make the country less dependent on the United States for its security needs. Besides, its likeliest adversary in a future war — China — would probably also be involved in a prospective multilateral agreement. The country's currency plays only a marginal role on the global stage for now. Even so, because of China's overall economic clout and its trade ties with the United States, it would likely be at the heart of an updated Plaza Accord.

The United States' domestic political climate has likewise changed drastically in the decades since the Plaza Accord's signing. When U.S. Treasury Secretary James Baker coordinated the 1985 meeting, the United States' trade partners were concerned mostly with the rumblings of protectionist policies among lawmakers in Washington. But Congress was not directly involved in the negotiations. Now, the protectionist threats are coming straight from the White House (though plenty of lawmakers in Congress have echoed them). The Trump administration would at once be leading the negotiations and providing the incentive for their success, a recipe for confrontation. What's more, the current administration seems to have a more contentious relationship with the Fed, compared with the Reagan administration, though that may change as Trump appoints more members to its governing board.

If events over the coming months drive the U.S. administration to try to make a new deal with the rest of the world's leading economies, a G-20 summit would provide the most likely venue for the discussion. A meeting in Shanghai in 2016 sparked market rumors of a secret accord, since the world's major central banks altered their policy course immediately after it concluded. In coordinating a new deal, the United States would likely target countries with which it has a large deficit — namely, China, Japan and Germany. It might also include the United Kingdom in light of the pound sterling's weight in markets. (Despite its sizable trade deficit with Mexico, the United States would probably opt to exclude it from the negotiations since Washington plans to address its economic relationship with the country by revising the North American Free Trade Agreement. Ireland, which is also a major trade deficit country for the United States, is both small in size and likely to be affected by an upcoming U.S. tax reform, so it will probably not have a strong voice in any currency negotiations.)

To achieve a new accord, the participating countries would have to be willing to put their trade relationship with the United States ahead of their own national priorities. Though Japan has committed to increase investment in the United States — in part as a demonstration of good will toward the new administration — Tokyo will be loath to take any action that would further boost the yen's value. Washington may have a little more room for maneuver with the eurozone, however. Over the past few months, inflation has returned to the currency area, and Germany — Europe's most influential country — may be open to the idea of a stronger euro to keep it from rising out of control. Accommodating Washington's demands could also facilitate Germany's efforts to keep the eurozone from falling apart by swaying the United States to avoid making moves that could further destabilize the monetary bloc. And for the United Kingdom, the accord could provide an opportunity to stay in the United States' good graces — a priority for London heading into the Brexit negotiations.

Perhaps counterintuitively, China may actually be the country most receptive to a new multilateral monetary intervention, especially if the United States could encourage Japan and Europe to appreciate their currencies at the same time. Already, Beijing has been spending down its reserves to preserve the yuan's value against the dollar. Furthermore, a stronger yuan fits in with Beijing's initiative to reorient its economy toward consumption. Still, China probably wouldn't make an easy negotiating partner for the United States. The country considers itself an emerging power in its own right and will not be willing to jeopardize its delicate social and economic balance just to appease Washington — especially when it has more pressing problems to deal with.

For now, the many obstacles that stand in the way of a new Plaza Accord-type agreement make the prospective deal unlikely. Nevertheless, if the dollar continues to rise and the United States' trade deficit starts to grow, the Trump administration may begin considering unorthodox measures to keep its fiscal policy initiatives on track.

For U.S. Rivals, the Capitol Siege Offers a Window of Opportunity

With Biden in Power, Vietnam Is Set for Success