Retaking Raqqa From the Islamic State

Fighters belonging to the Syrian Democratic Forces sit on an armored personnel carrier in al-Hasaka province on Feb. 19.

The battle for Raqqa, the Islamic State's self-declared capital in Syria, has begun. The Syrian Democratic Forces (SDF) are advancing toward the city, engaging the jihadist group in the villages of al-Hisha, Tal Samen and Mutamshirij along the way. Because of Raqqa's strategic importance, the Islamic State will do everything in its power to keep the city within its grasp. Driving the militants from their stronghold will not be easy or cheap, but if the SDF is successful, it will greatly accelerate the Islamic State's defeat in Syria.

For months, the SDF, backed by the United States, has been positioned on the front lines roughly 40 kilometers (25 miles) north of Raqqa. Videos have emerged showing large convoys, including tank transporters carrying armored vehicles, moving throughout the area as the group prepared to retake the city from the Islamic State fighters who captured it in 2013. Over the past week, the United States began dropping leaflets on Raqqa urging its citizens to leave, proclaiming, "The time you have awaited has arrived. It's time to leave Raqqa." Then on May 21-22, U.S. Gen. Joseph Votel — the top U.S. Central Command general and the highest-ranking U.S. official to travel to Syria during the conflict — visited SDF fighters in the country's north. As the signs of impending battle mounted, the Islamic State began making preparations of its own, ramping up its defenses throughout Raqqa. And on May 24, the SDF made its move, announcing the start of its long-awaited advance.

But just how close the group is able to get to the heart of the city will be determined by one thing: its ethnic composition. Raqqa is a city with an Arab majority. Because the SDF and its backers want to not only retake the city but also to hold and govern it, they will need a sizable Arab force if they hope to achieve their objectives with local support. However, the SDF is currently dominated by the Kurdish People's Protection Units (YPG), which have been effective against the Islamic State in territory they are familiar with in the north and northeast but are less inclined to spearhead operations farther south toward Raqqa. Moreover, the deeper the Kurds push into overwhelmingly Arab territory, the more they risk cementing local populations' suspicions of the rebels and support for the Islamic State.

Still, Arab fighters have been joining the SDF's ranks in droves. In fact, training these Syrian Arab Coalition fighters is one of the core purposes of the 250 U.S. special operations forces deployed to Syria in April, and Votel was likely checking up on their progress during his visit to the country. (The general subsequently traveled to Turkey to reassure Turkish officials of U.S. support for the SDF.)

Once the Syrian Arab Coalition grows to the ideal size and strength, and final preparations are complete, the SDF will shift its offensive to a direct attack on Raqqa. Because the Islamic State will not give up the city without a fight, the ensuing battle will likely be expensive and lengthy, easily lasting weeks if not months.

The first and simplest phase of the operation will be the SDF's advance from its current position on the front line south of Ayn Issa toward the outskirts of Raqqa. This part of the offensive has already begun, and on May 24, the group captured the town of Fatisa, around 35 kilometers (22 miles) from Raqqa. 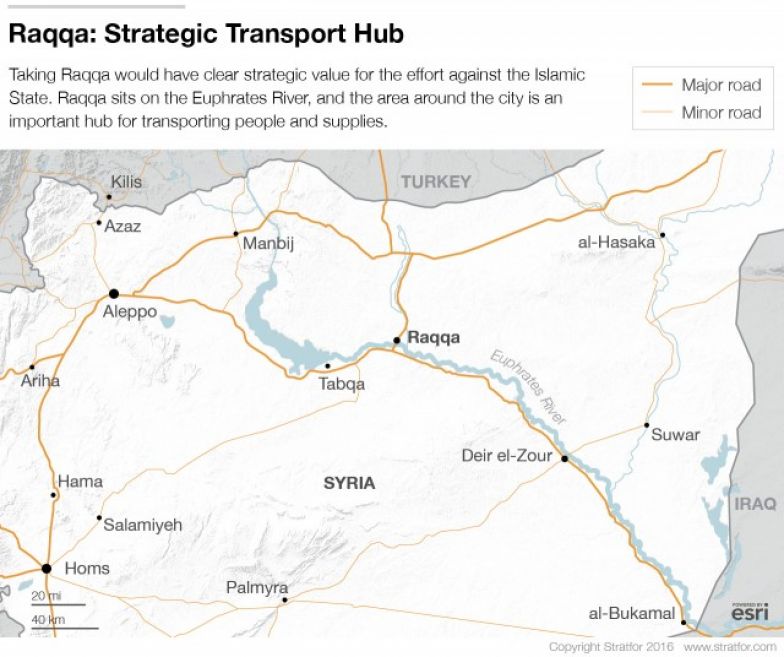 Once the SDF closes the distance between itself and the Islamic State's dug-in posts in and around Raqqa, the pace of the battle will slow considerably. In what will become a grinding and methodical advance, the SDF will have to contend with improvised explosive devices, mines, booby traps, suicide bombers, local counterattacks and indirect fire from mortars and artillery in the city. It will also have to rely on U.S. air support to take out the Islamic State's strongest positions, and despite efforts to minimize civilian casualties, the Islamic State's tendency to use human shields will probably lead to a high death toll. The effort to seize Raqqa, much like Iraq's endeavor to retake Ramadi, will come at a terrible cost, all but guaranteeing the city's destruction.

For the Islamic State, the loss of Raqqa would be a devastating blow. The city not only has symbolic value as the capital of the group's so-called caliphate, but it is also an important hub for transporting people and supplies. Raqqa sits on the Euphrates River and is the key to controlling several critical highways in Syria. Without it, the Islamic State would have a much harder time moving fighters and goods from Aleppo province to eastern Syria and beyond. Instead it would be forced to rely on the Resafa-Ash Shola road, which is increasingly threatened by the Syrian government's advances toward Deir el-Zour.

Given the city's significance to Islamic State operations in Syria, the group can be expected to funnel substantial resources and reinforcements toward its defense. In addition to sending more fighters to Raqqa, the Islamic State will likely launch counterattacks along the SDF's other front lines, including al-Hasaka, in an effort to distract its foe. However, the Islamic State will be at a disadvantage: While the SDF is focusing most of its attention on attacking the jihadist group, the Islamic State has to contend with the Syrian rebels, Syrian government troops, Kurdish peshmerga and Iraqi forces. Devoting additional attention and resources to Raqqa when it is already overstretched will inevitably hurt the extremist group elsewhere on the battlefield.

The Geopolitics of Missions to Mars

With U.S. Arms Sales in Question, Saudi Arabia and the UAE May Weigh Alternatives