The Rise of a New Nigerian Militant Group

By Matthew Bey and Sim Tack

In the past week, 14 foreigners have been kidnapped in northern Nigeria and Cameroon in two separate attacks. No group has claimed responsibility for the second attack, which occurred Feb. 19 in Cameroon, but the location is adjacent to Boko Haram's core territory in northeast Nigeria. Ansaru, a splinter group of Boko Haram, claimed responsibility for the first attack and could be responsible for the second since, unlike Boko Haram, it has a history of kidnapping foreign nationals. If Boko Haram conducted the second attack, it would signal a significant shift in the group's targets and tactics.

As Stratfor noted, Boko Haram's capabilities in 2012 were limited to soft targets near the group's base of operations in northeastern Nigeria. Ansaru has emerged over the past year and appears to have surpassed Boko Haram in its range of tactics and targets. Ansaru has relied on armed attacks and kidnappings rather than suicide bombings. Ansaru's targets have included foreigners and those involved with the intervention in Mali, while Boko Haram's targets have been Nigerian.

Nearly all of the Ansaru attacks since December 2012, as well as the unclaimed kidnapping in Cameroon, have targeted French nationals or those supporting French operations in Mali. This has raised the fear that widespread kidnappings will be fallout from the Mali intervention. A continuation of this violence could harm foreign interests in Nigeria and the surrounding countries and strengthen militant jihadism throughout the region.

Not a lot is known about the origin of Ansaru, but following Boko Haram's attacks on Kano — a predominately Muslim city in Nigeria — that killed almost 200 people in January 2012, Ansaru publicly split from Boko Haram, denouncing the killings of innocent Muslims. However, the group's formation began earlier in connection to two kidnappings.

The first was in May 2011, when a group claiming to be al Qaeda in the Land Beyond the Sahel and a faction of Boko Haram kidnapped two engineers — one British and one Italian — in Birnin Kebbi, Nigeria. On Dec. 1, 2011, a video was sent to Agence Nouakchott d'Information, Mauritania's state media outlet, demanding a 5 million-euro (about $6.7 million) ransom. Demanding millions in ransoms is a strategy employed by al Qaeda in the Islamic Maghreb; Nigerian militants' demands do not typically reach this level. Agence Nouakchott d'Information is known to have close contacts with al Qaeda's North African branch and served as the mouthpiece for Mokhtar Belmokhtar during the January 2013 attack on the Ain Amenas plant in Algeria. The mediator in the ransom negotiations, Mustafa Ould Limam Chafi, also negotiated many of al Qaeda in the Islamic Maghreb's previous hostage ransoms, including the release of U.N. Special Envoy to Niger Robert Fowler, the Canadian diplomat who was kidnapped in Niger in 2008. The connections to Agence Nouakchott d'Information and Chafi suggest that the group responsible for the May 2011 kidnappings in Nigeria — Ansaru or its predecessor faction within Boko Haram — has close ties with al Qaeda in the Islamic Maghreb.

The man behind the May 2011 operation was trained by Khalid al-Barnawi, whom the U.S. State Department designated a global terrorist in June 2012 because of his ties to Boko Haram and al Qaeda in the Islamic Maghreb. Al-Barnawi's connection with North African jihadist groups includes time spent with the Salafist Group for Preaching and Combat, where he worked with Belmokhtar. He also set up kidnapping training camps in Algeria. It is unclear what the link is between al-Barnawi and Ansaru. Some experts have told news media that Abu Usmatul al-Ansari, who claims to be Ansaru's leader, could be a pseudonym for al-Barnawi. Al-Ansari surfaced earlier as Boko Haram's commander in Nigeria's northeastern states, which has been Ansaru's primary area of operation.

The second kidnapping was the January 2012 abduction of a German engineer in Kano. Al Qaeda in the Islamic Maghreb claimed responsibility in a video sent to Agence Nouakchott d'Information, but it is more likely that a local group kidnapped the engineer. The hostage was killed during a rescue attempt by German special operations forces in Kano; al Qaeda in the Islamic Maghreb typically transports hostages to the mountains of northern Mali. According to a Stratfor source, just two weeks after the rescue attempt, the same German special operations forces group targeted a convoy of four cars in northern Nigeria, possibly to disrupt a rumored meeting between a representative of al Shabaab and Abu Zeid, a prominent al Qaeda commander in the Sahel. It is likely that the German special operations forces obtained relevant intelligence in the rescue attempt and acted on it. If such a piece of intelligence was found in Kano, then links between the group behind the operation and al Qaeda in the Islamic Maghreb must be fairly robust, which would mean that al-Barnawi was almost certainly involved with the operation. 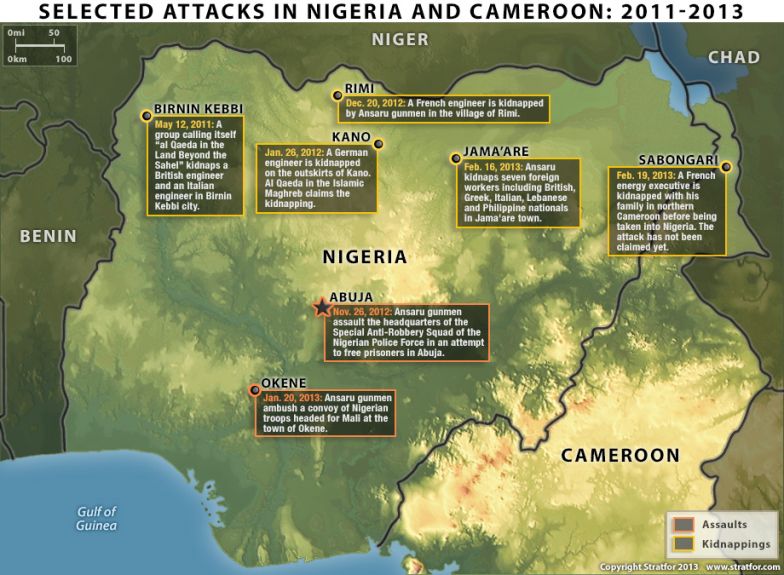 Ansaru's first claimed attack was in November 2012, when 40 gunmen assailed the Special Anti-Robbery Squad detention facility in Abuja. After claiming responsibility, al-Ansari stated that Ansaru would target foreigners. The next attack was by 30 gunmen on a French company's compound in Katsina, Nigeria, resulting in the kidnapping of a French engineer. Afterwards, al-Ansari said the attack was because of France's support for an intervention in Mali. This was also the first attack against a Western target in the region since the August 2011 Abuja U.N. bombing, which remains Boko Haram's only transnational attack.

In January, Ansaru ambushed a military convoy bound for Mali — its second consecutive attack with a transnational objective. Ansaru followed this with an abduction of seven foreign nationals in Bauchi, Nigeria, on Feb. 16. While kidnappings of foreigners are rare in northern Nigeria and Boko Haram has never claimed responsibility for one, Ansaru appears to be focusing on kidnapping operations similar to those carried out by al Qaeda's North African branch.

Boko Haram's tactics can be broken down generally into two categories: suicide bombings (typically using vehicle-borne explosives) and motorcycle ambushes. Boko Haram's target set typically constitutes churches, the police, the military, religious leaders and political institutions. Since November 2012, Boko Haram has attacked a church in a military compound in Kaduna state, made an assassination attempt on the emir of Kano and bombed two churches on Christmas Eve. In December 2012, vehicle-borne suicide bombers targeted offices of two international phone service providers, but this was because the companies were assisting authorities, not because Boko Haram was making a move toward international targets.

Ansaru's attacks, on the other hand, have consisted of raids by gunmen against hardened targets. A platoon-sized element typically assaults the compound where hostages will be abducted, or prisoners freed, before withdrawing. Explosives have not been used in Ansaru raids, except to breach barriers. Such attacks require different capabilities and preparations than Boko Haram's suicide bombings do.

It is becoming increasingly clear that Boko Haram and Ansaru have distinct agendas and different tactics and target sets. There is a long history in using militancy to achieve political ends in Nigeria. Boko Haram — or at least some of its factions — satisfies political objectives in the north against President Goodluck Jonathan's administration, and two northern senators have been accused of helping the group. At least presently, Ansaru does not appear to have any of these connections. Its operations do not appear to directly influence Nigerian politics.

Boko Haram's use of suicide bombs, car bombs and other attacks means that it remains the more dangerous group overall. However, Ansaru's more transnational scope of attacks means that the group could pose a greater danger to Western targets and could have the ability to coordinate with other groups operating in West Africa.

Documents recently found in Timbuktu, originating from al Qaeda in the Islamic Maghreb's leadership, describe how the group's contacts with local militants, such as Ansar Dine in Mali, are to be kept quiet. The same could be true for relations between al Qaeda's North African branch and Ansaru. Based on the history of those allegedly involved in Ansaru and the group's stated allegiances, it is very likely that al Qaeda in the Islamic Maghreb will in some ways attempt to direct Ansaru's activities in Nigeria. Ansaru offers the al Qaeda branch further reach into northern Nigeria, which it has long sought.

If ties between the organizations do exist, al Qaeda in the Islamic Maghreb may work more closely with Ansaru in an attempt to orchestrate its activities into a broader strategy. A Boko Haram offshoot with an aggressive stance toward foreign targets within Nigeria could attract like-minded Boko Haram leaders, such as Mamman Nur (the architect of the U.N. compound attack), and increase the complexity of the group's operations. Although Ansaru is not known to use Boko Haram's tactic of suicide bombings, shifting allegiances within Boko Haram-affiliated groups could bring elements into Ansaru that might expand on the current type of operations the group conducts.

Ansaru's development is significant, and while the group has not been responsible for a large number of attacks, its operations reach beyond Nigeria's borders. Ansaru could also extend al Qaeda in the Islamic Maghreb's network farther south, possibly into Cameroon, and the group's rise could easily negate the gains made against militants in northern Mali. Regardless of eventual developments in the region, the risk of kidnappings near northern Nigeria is increasing.