Russia Is Destroying Its Food

Russia's recent show of strength toward the West may come at the price of its own internal stability. On Aug. 7, Russian President Vladimir Putin ordered a crackdown on violations of the Kremlin's food sanctions against the European Union and the United States, during which some illegally imported food was destroyed. The move was very unpopular among Russian officials and the public. Since food imports to Russia fell by more than half within a single day of Putin's order, many criticized the Kremlin for destroying food at a time when Russians are under increased financial and economic pressure. If the Kremlin continues to crack down on those who violate the order, protests will only grow louder.

Russia enacted sanctions on many high-end Western food products on Aug. 5, 2014, in response to sanctions placed on Russia by most Western states because of Russian actions in Ukraine. Even though only certain foods were banned, the sanctions — not to mention currency fluctuations — contributed to an average increase in food costs of 20 percent over the past year. The price of some staple goods, such as cabbage, rose more than 60 percent in early 2015.

The Kremlin initially pledged to stem price hikes, increase domestic production and import food from new sources. Fruit and vegetable imports from European countries outside the European Union, such as Serbia and Macedonia, indeed grew by between 35 and 200 percent over the past year.

It was the black market, however, that really cushioned the sanctions blow. To bypass the ban, countries barred from exporting to Russia began shipping through Belarus and Kazakhstan. The European Fresh Produce Association reported that EU produce exports to Belarus increased by 141 percent and to Kazakhstan by 108 percent within the first six months of the sanctions' passage; both countries then turned around and re-exported much of that produce to Russia.

In early 2015, when Russia finally closed this loophole, re-exporters simply started falsifying countries of origin on their illegal shipments. The Russian government is aware of the false documentation, and the country's agricultural import watchdog, Rosselkhoznadzor, has been particularly adamant in opposing it. The organization recently confiscated 73 tons of peaches with false Turkish certificates that were actually from the European Union. On Aug. 6, the same group in St. Petersburg burned 20 tons of German cheese mislabeled as a product of Russia. Since Putin ordered the crackdown, Rosselkhoznadzor has destroyed thousands of kilograms of food imported in violation of Russian sanctions.

Yet that is only a fraction of what has been illegally imported. According to the head of Rosselkhoznadzor, Sergei Dankvert, his organization has only been able to intercept an estimated 10 percent of illegal imports over the past year. In an effort to make a bigger impact, Rosselkhoznadzor has over the past two days whittled down daily food imports across Russia's western border by more than half, subjecting each shipment to more intense scrutiny. The Smolensk border post, for example, processed only 70 shipments on Aug. 7, compared with its usual 170. However, to fully carry out Putin's Aug. 7 order, Rosselkhoznadzor will have to expand its personnel. 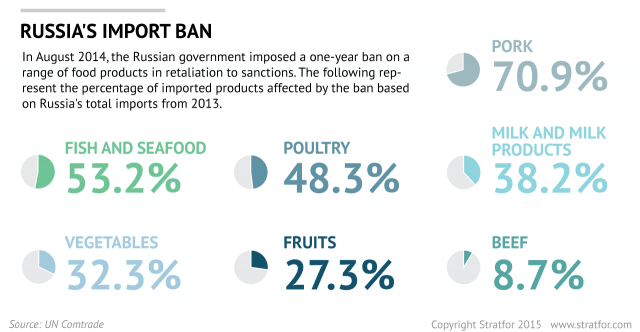 Perhaps because of these successes, the public crackdown on illicit food imports has generated — and will continue to generate — opposition across the Russian political spectrum. More than 285,000 people have signed an online petition urging the Kremlin to give the food to the poor instead of destroying it, while Russian lawmaker Andrei Krutov proposed to donate all the confiscated food to the war-torn separatist regions in eastern Ukraine. Meanwhile, opposition heavyweight and former Prime Minister Mikhail Kasyanov sarcastically called the food policy "some real triumph of humanism," pointing out the sheer wastefulness of the order as 20 million Russian citizens remain below the poverty line.

The criticism is not limited to those among the opposition. Even pro-Kremlin TV anchor Vladimir Solovyov has publicly criticized Rosselkhoznadzor's actions. "I don't understand how food can be destroyed, " Solovyov said, "in a country that lived through the horrible hunger during the war and tough years that followed." One Russian Orthodox priest and Putin backer expressed similar frustrations when he posted his own critique of the food policy on a religious website: "My grandmother always told me that throwing away food is a sin. This idea is insane, stupid and vile," he wrote.

These strong reactions seem to have taken the Kremlin somewhat by surprise. Until now, the government has come under little criticism for its countersanctions over the past year. In fact, when the food ban was first put in place, nationalist Russian citizens went so far as to publicly destroy food themselves in support of the government's decision. (Of course, Russia's economy was much healthier then than it is now.)

A History of Food Insecurity

In Russia, millions perished between the 1920 and 1940s from hunger. In 1921, 6 million died when drought and food confiscations during World War I and the Russian Revolution led to a famine across the Volga and Ural regions. Then, as many as 7 million more died between 1932 and 1933, when the Soviet Union's forced collectivization policies saddled Kazakhstan, Ukraine and the Northern Caucasus, the Volga region, the southern Urals and western Siberia with major food shortages. And the country's final major famine of 1947 and 1948, brought about by more droughts and the devastation of World War II, killed an estimated 1.5 million more Russians.

The relative prosperity that followed the collapse of the Soviet Union saw Western foods flood the Russian market. When Putin first took power, he gained legitimacy among his people in part by ensuring reliable food sources and by upgrading and expanding the types of food available.

But now, Russia's standard of living is being tested by Moscow's attempt to prove a point to the West. Despite the rampant criticism, the Russian government is standing behind its move to limit illegal food imports. Putin spokesman Dmitri Peskov repeated Aug. 10 that the situation should not be blown out of proportion. But the controversy may aggravate existing social unrest over economic malaise, and the Kremlin is worried that that unrest could lead to more protests. For that reason, Moscow may moderate its response to countersanctions violations by opting for forceful but sporadic crackdowns rather than systematic crackdowns.