Russia Takes on Its Demographic Decline

A picture taken on March 30, 2017 shows a woman entering a building of Federal State Statistics Service (Rosstat) in Moscow. The exact rate of Russia's demographic decline isn't known, but there's no question that the country is facing a population problem.

From great power competition with the United States to internal unrest, Moscow has plenty of issues to deal with, but another problem looms ominously on the horizon: demographic change. Because of emigration and low birth rates, Russia's population is projected to decline precipitously in the next few decades. This could have significant geopolitical implications, impacting everything from the country's economy to its military power to its ability to project influence around the world — especially in its near abroad. But due to the disparities between population projections, and to Moscow's efforts to mitigate its decline, the true scale of the demographic threat facing Russia is unknown. While a perusal of various data sets suggests that fears of Russia's imminent demographic demise might be exaggerated, the country's planners still have much work to do to arrest the decline.

Russia's demographic outlook will play a major role in shaping the country both internally and internationally in the coming decades. The looming population decline will challenge Moscow's ability to sustain its economic and military power, just as the changing ethnic balance in Russia will complicate Kremlin efforts to manage social and political instability.

The primary sources for Russia's demographic data are the Federal State Statistics Service (Rosstat), a Russian government agency, and international bodies such as the United Nations and the Organization for Economic Cooperation and Development. In tracking Russia's historical and current population data, there is little discrepancy between the Rosstat and U.N. figures, but there is a far larger gap between Rosstat and the OECD regarding Russian emigration to specific countries like the United States and Germany.

That's because Rosstat only counts Russians who officially cancel their registration in their homeland — something that most emigrants do not do. As a result, the number of Russians emigrating from the country is much higher than the numbers Russia has officially reported, according to a study that the independent media outlet Proekt released in January, citing OECD data. Indeed, certain destination countries, including the United States, have reported Russian immigration figures as many as six times as high as those reported by Rosstat. 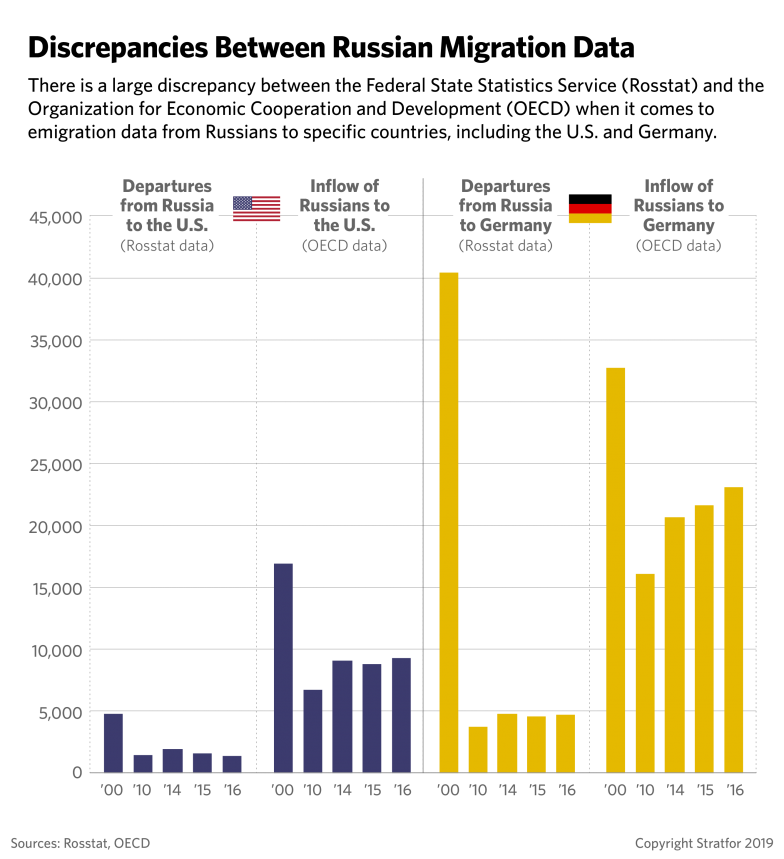 Crucially, however, the Proekt report cited OECD migration data published by the destination countries, which doesn't necessarily indicate that incoming Russians actually arrived from Russia. Instead, these "persons holding a Russian nationality arriving from anywhere" could, for example, be Russian citizens who emigrated from France to Germany. This could explain why the OECD figures diverge so much from Rosstat's numbers, as the latter only tallies people leaving Russia. But while the gap between the Russian and international numbers is simply too large to suggest that the difference consists of Russians migrating from third countries to the likes of the United States or Germany, it is likely an exaggeration to claim that the true rate of emigration is six times as high as the Rosstat figures; instead, the reality is somewhere in between.

When it comes to projections for Russia's overall population, the country is currently projected to lose about 8 percent of its population by 2050 according to the United Nations. (Rosstat does not publish such projections.) Naturally, larger emigration numbers would accelerate the population decline. But given the incongruous data sets, it's difficult to project a precise timeline for Russia's downward demographic trend.

Another factor to consider is the Kremlin's efforts to offset its population decline and emigration trends. According to the Russian business daily Kommersant, the Russian government plans to attract 5 million to 10 million migrants from neighboring countries with large Russian-speaking populations, including Kazakhstan, Uzbekistan, Ukraine and Moldova, to offset Russia's population decline over the next six years. The government's efforts to attract migrants, as well as it bid to encourage more births, managed to hold the population trend steady in recent years, but 2018 was the first year since 2008 in which Russia's population dropped in absolute terms, falling by 93,500 to 148.8 million people. The country's current plan to attract at least 5 million migrants in just over five years, however, is far more ambitious. 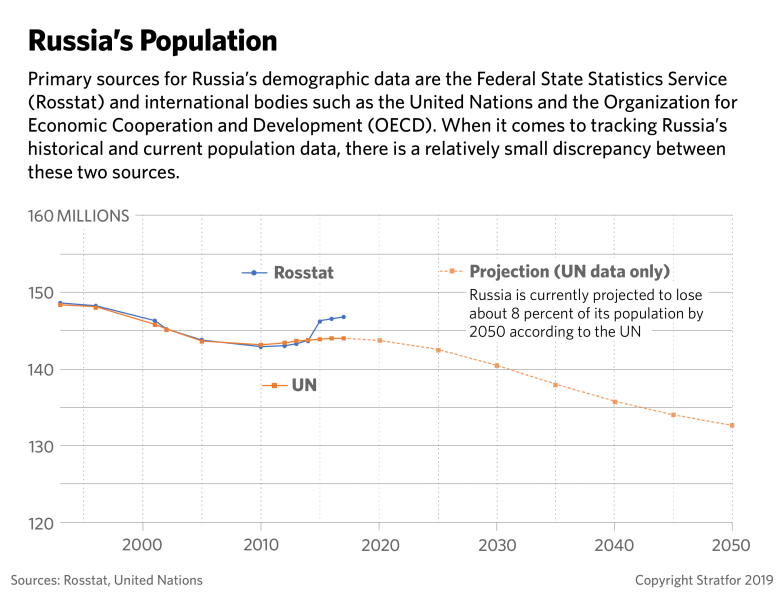 The extent to which the Russian population will decline will have significant implications for Moscow. The continued fall in population will undermine Russia's economic position, particularly as the people most likely to leave are young, educated professionals in sectors like technology and the military. Rosstat, too, has noted the increased brain drain: In 2017, 22 percent of emigrants from Russia possessed advanced degrees, up 5 percent from 2012. The fall will make maintaining tax revenues and sustaining the pension system challenging for Russia, something that prompted the government to raise the retirement age effective this year.

The change will also alter Russia's demographic composition, as migrants from faster-growing countries in the Caucasus and Central Asia are likely to migrate to Russia in greater numbers to make up for the population loss. This, in turn, could foment more ethnic tensions in the country and increase political instability, as evidenced by recent protests against migration in Moscow and Russian Far Eastern cities like Yakutsk. The potential for ethnic tensions notwithstanding, the Russian government has few options but to attract more immigrants to offset its impending population decline.

From a geopolitical perspective, a weakened economy and smaller population will also compromise Russia's ability to project military power and political influence, as the country will lag behind countries that are growing in population and competing for influence in the region, including great power competitors China and the United States and even smaller powers like Turkey and Iran. So while the exact extent of Russia's demographic decline and changing ethnic makeup is difficult to predict, there is little doubt it will give Moscow great cause for concern in the long term.